During my investigation of Ortigia, I came to an understanding that this community is very loyal in paying homage to their Patron Saint, St. Lucy and their hero of mathematics, Archimedes.

Archimedes, born around 287 BC when Siracusa was a colony of Magna Graecia, and was laid to rest in 212 BC in Syracuse (Siracusa). He was an Ancient Greek mathematician, physicist, engineer, inventor, and astronomer. He is regarded even today, as one of the leading scientists in classical antiquity. There is a Piazza that was built to honor him, Piazza Archimedes.

The following information about Archimedes is from the blog, http://www.ancientgreece.com:

“Archimedes has many discoveries and inventions to his credit, but he considered his theoretical work as his main triumph. Along with his inventions in mathematics and geometry, he is also known for the weapons he created for King Hiero II to help protect Syracuse. He is credited with many inventions in the field of mathematics and physics such as “Death ray”, “Archimedes claw”, hydrostatics, calculus, etc.”

“Except for the period of his life where he attended school in Alexandria at Euclid’s, Archimedes spent all his life at Syracuse. Ancient Greek biographer Plutarch, relates Archimedes to King Hiero II of Syracuse. He says Archimedes achieved so much fame because of his relation to King Hiero II and Gelon (son of King Hiero II). He was a close friend of Gelon and helped Hiero solve complex problem with extreme ease, utterly amazing his friend..Archimedes died in 212 B.C. during the Second Punic war, when Syracuse was captured by the Roman forces after a two year siege.”

Then there is St. Lucy (Lucia) who has a shrine dedicated to her in the Duomo consisting of a painting and a tomb with her relics There is another church set in the Piazza Duomo with her name, Chiesa di Santa Lucia Alla Badia (Church of St. Lucy) which has Caravaggio’s last painting, “Burial of St. Lucy. There are two annual festivals held in her honor.

The following details is from the Italy Heaven Blog:

“Duomo is one of the town’s most celebrated sights. The building records the many ages of the town. Once it was the Greek Temple of Athena, with a giant gold statue of the goddess on its roof. The massive Doric columns of the temple are still visible…The wall above the columns along Via Minerva, with battlements, is Norman in origin, while the fancy Baroque facade was a replacement after the 1693 earthquake.”

“Inside the Duomo, you can see more evidence of the temple origins of the building, and more of the original structure. Those interested in relics can admire some displays of saints’ bones in the chapel to the right of the main altar.  A small room by the exit (not always open) is a shrine to Santa Lucia, the patron saint of Siracusa, and contains offerings to the saint, as well as the usual relics. Over the years Syracusans have presented a range of precious items and jewellery, many decorated with the saint’s ‘eyes’ motif. Santa Lucia, or Saint Lucy, is loved so much that Siracusa awards her two festivals a year, in May and in December, with the saint’s statue being ceremonially removed from her side-chapel and placed in front of the main altar, before a succession of traditional festivities and the carrying of the statue through town. “

“The following description of the Fonte Aretusa is from the Italy Heaven blog:

“The Fonte Aretusa (on the western shore) is a fresh-water spring whose history goes back to the earliest Greek colonists. According to mythology, the spring is an embodiment of the nymph Arethusa, changed into a watercourse by her goddess Artemis/Diana in order to escape the attentions of unwanted suitor Alpheus (Alfeo). Since he too became a river in order for their waters to mingle, her ploy wasn’t totally successful, though a local did descibe this to me as ‘romantic’. A sculpture showing the scene is positioned alongside the spring. Surrounded by high stone walls, planted with papyrus and inhabited by white ducks, the spring is an important spot on the Ortigiapasseggiata. Next door there is also a small aquarium that offers a burst of air-conditioned coolness in the summer.”

One of the most pleasant activities was for us to go for our evening promenade along the pathway in the waterfront area as we passed by all the other tourists and locals. There are ample cafés, bars, gelato and bakery shops where one can stop for a rest while savoring a treat. 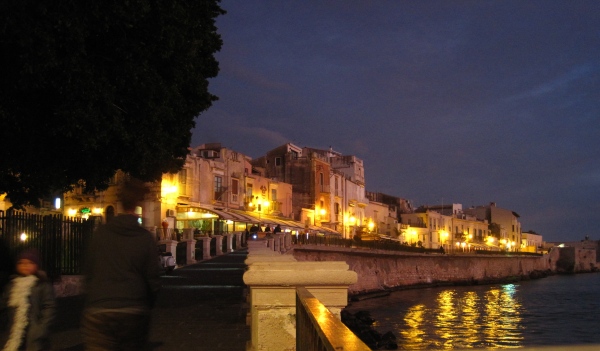 The sun-drenched Piazza del Duomo, dotted with numerous cafés is the premier place where one can sit back to vicariously observe the theater of life. Be aware that for this pleasure, you will be charged a cover charge of about four euros. One time, we ordered an antipasto which included a huge selection of delicacies, enough for two ladies. With a Prosecco, a café and dessert, we were quickly stuffed.

The Story of Saint Lucia (and how a Catholic saint came to be … https://historiful.wordpress.com/2010/12/13/the-story-of-saint–lucia/Dec 13, 2010 – The Holy Saint Lucia is the patron saint of Syracuse in Italy whose saint’s … Thestory goes that her mother was sick, so the young girl travelled …

Archimedes summary www-groups.dcs.st-and.ac.uk/~history/Mathematicians/Archimedes.html/ Archimedes. 287 BC – 212 BC. Archimedes was the greatest mathematician of his age. His contributions in geometry revolutionized the subject and  …