aside Dear Democrats And Friends, How Do We Play The Lousy Hand We’ve Been Dealt?

Dear Readers, The sad truth is that the democratic presidential nominee, Hillary Clinton and her party in their hubris, lost the election to a flawed candidate because they chose not to listen to voices outside their bubble sounding the alarms about a very real pending loss. Had she decided to listen and to act accordingly, this election would have been in the bag for her despite all the unfair obstacles that she had to overcome.

But alas, now that we Americans have been dealt this lousy hand of a Donald Trump U.S, presidency, how can we best play it?

There are two good cards that we are holding; (1.) the fact that Hillary Clinton won the popular vote and (2.) that Donald Trump promised his followers that he would always act in a way consistent with their best interests. Both these cards are crucial to any campaign designed to mitigate any harm that the president elect can do.

Because Hillary Clinton won the popular vote, we can rightfully stand our ground to hold the president elect accountable for everything he does. Then we insure that he follows up on his own commitments to the hard working peoples who voted for him and counter his steps whenever he deviates from this stated goal. We will extend our hand to let them know, we hear them and we support them.

This has to start with all of us demanding that he not fill the current cabinet and other appointed positions with his cronies who encouraged all the negative aspects of his campaign. He was given a mandate by his followers to get things done on their behalf. Too many of Donald Trump’s buddies like Rudy Giuliani and Newt Gingrich are political insiders who have their own interests and hidden agendas. Mr. Gingrich’s speakership was the one who heralded in partisan and obstructionist tactics into the U.S. congress.

It is important that the president elect Donald Trump be presented with a list of the best and brightest in their fields to choose from and this would definitely not include the current sycophants.  He needs to surround himself with competent experts who will respectfully speak to up to power and who will work effectively with others on both sides of the aisle to move forward a powerful positive agenda to lift up the hurting working peoples in this country. Their are numerous republicans who are capable of getting on this train of “Making America Great Again,” for real. 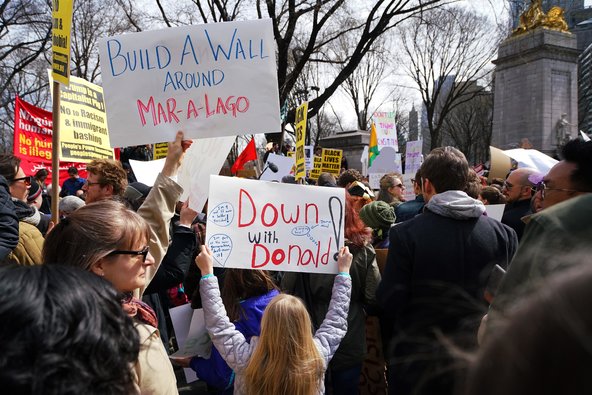 In short, the first stated goal of those protesting should be that the U.S. president- elect hire the best and the brightest in their fields, and by filling all the vacant appointed positions, with qualified personnel who have a proven record of competently getting things done without undue drama.

In the following commentary excerpts, Mark Landler addresses this issue in this 11/12/16 New York Times article, “Trump’s Hires Will Set Course of His Presidency:” “In such a chaotic environment, serving a president who is in many ways a tabula rasa, the appointees to key White House jobs like chief of staff and cabinet posts like secretary of state, defense secretary and Treasury secretary could wield outsized influence. Their selection will help determine whether the Trump administration governs like the firebrand Mr. trump was on the campaign trail or the pragmatist he often appears to be behind closed doors.”

“A new president is really vulnerable and open to all sorts of influence by strong-willed advisers,” said by Robert Dallek, a presidential historian. “Trump’s appointments over the next six weeks will be very significant because they can show whether he wants to create some unity in the country, or whether he really intends to deliver on his ideas.”