It is going to important to make sure that the republican President-elect Donald Trump remains true to his two all-encompassing promises to his followers that he would always act to make America safer and that he would not do anything to harm the American average worker and family. This is the segment of the American population that helped him to be catapulted into the White House.

Fortunately, Jenna Johnson has compiled this list of pledges in her 1/22/16 Washington Post article, “Here are 76 of Donald Trump’s many campaign promises:”

1. Build a wall along the southern border that’s taller than the arenas where Trump holds his rallies, taller than any ladder and one foot taller than the Great Wall of China. This “artistically beautiful” wall will be constructed out of hardened concrete, rebar and steel, and it will be “the greatest wall that you’ve ever seen” — so great that the nation will likely one day name it “The Trump Wall.”

2. Make Mexico pay for the wall. If Mexico refuses, then the United States will impound all remittance payments taken from the wages of illegal immigrants, cut foreign aid, institute tariffs, cancel visas for Mexican business leaders and diplomats, and increase fees for visas, border-crossing cards and port use.

3. “If I become president, we’re all going to be saying ‘Merry Christmas’ again.”

4. Get rid of Common Core because it’s “a disaster” and a “very bad thing.” Trump says he wants to give local school districts more control and might even eliminate the Department of Education.

7. Knock down the regulatory walls between states for health insurance, making plans available nationally instead of regionally.

8. Rebuild the country’s aging infrastructure — especially bridges and airports that look like they belong in a third-world country — for one-third of what the United States is currently paying for such projects.

9. Save Medicare, Medicaid and Social Security without cutting benefits.

13. Temporarily ban most foreign Muslims from entering the United States “until our country’s representatives can figure out what is going on.” Trump would allow exceptions for dignitaries, business people, athletes and others who have “proven” themselves.

14. Bar Syrian refugees from entering the country and kick out any who are already living here. Trump says wealthy Persian Gulf nations like Saudi Arabia should pay to set up a heavily guarded “safe zone” in Syria.

15. Heavily surveil mosques in the United States. Trump has said he’s open to the idea of closing some mosques.

17. Never take a vacation while serving as president.

18. Prosecute Hillary Clinton for her use of a private email server while serving as secretary of state.

19. Make medical marijuana widely available to patients, and allow states to decide if they want to fully legalize pot or not.

20. Stop spending money on space exploration until the United States can fix its potholes. Encourage private space-exploration companies to expand.

23. Strengthen the military so that it’s “so big and so strong and so great” that “nobody’s going to mess with us.”

25. Allow Russia to deal with the Islamic State in Syria and/or work with Russian President Vladimir Putin to wipe out shared enemies.

26. “Bomb the s— out of ISIS.” Also bomb oil fields controlled by the Islamic State, then seize the oil and give the profits to military veterans who were wounded while fighting.

27. Target and kill the relatives of terrorists.

28. Shut down parts of the Internet so that Islamic State terrorists cannot use it to recruit American children.

29. Bring back waterboarding, which the Obama administration considers torture. Trump has said he’s willing to use interrogation techniques that go even further than waterboarding. Even if such tactics don’t work, “they deserve it anyway, for what they’re doing.”

30. Leave troops in Afghanistan because it’s such “a mess.” Protect Israel. And increase U.S. military presence in the East and South China Seas.

31. Find an “out” clause in the Iran deal and then “totally” renegotiate the whole thing

32. “I promise I will never be in a bicycle race. That I can tell you.” (This promise is connected to criticism of Secretary of State John F. Kerry, who was injured while riding a bicycle amid the Iran negotiations.)

34. Negotiate the release of all U.S. prisoners held in Iran before taking office. (Five hostages were recently released, including Washington Post reporter Jason Rezaian; Trump has taken some credit for this.)

35. Oppose the killing of journalists: “I hate some of these people, but I would never kill them.”

36. Find great generals — like the next Gen. Patton or Gen. MacArthur — and do not allow them to go onto television news shows to explain their military strategy: “I don’t want my generals being interviewed, I want my generals kicking a–.” Trump likes generals who are rough, foul-mouthed and beloved by their troops.

37. Drop that “dirty, rotten traitor” Bowe Bergdahl out of an airplane into desolate Afghanistan without a parachute.

38. The Phoenix VA, it has been reported, is in worse shape than ever before. The wait is horrendous, and people are dying. I will fix it.Fire “the corrupt and incompetent” leaders of the U.S. Department of Veterans Affairs and dramatically reform the agency. Allow veterans to take their military identification card to any medical facility that accepts Medicaid patients to receive care. Embed satellite VA clinics in rural hospitals and underserved areas, and ensure than every VA hospital is permanently staffed with OBGYN doctors.

39. Invest more heavily in programs that help military veterans transition back to civilian life, including job training and placement services. Also increase funding for the treatment of post-traumatic stress disorder, traumatic brain injuries and mental health issues. Veterans who apply for a job at a VA facility will have five points added to their qualifying scores.

40. Bring back jobs from China — and Mexico, Japan and elsewhere.

41. “I will be the greatest jobs president that God ever created.” Trump says cities like Reno, Nevada, will “be a big fat beautiful beneficiary” of these new jobs.

42. Students at Wofford College in South Carolina, where Trump attended a town hall, will all have jobs at graduation.

43. Aggressively challenge China’s power in the world by declaring the country a currency manipulator, adopting a “zero tolerance policy on intellectual property theft and forced technology transfer” and cracking down on China’s “lax labor and environmental standards.”

44. Rather than throw the Chinese president a state dinner, buy him “a McDonald’s hamburger and say we’ve got to get down to work.”

45. Replace “free trade” with “fair trade.” Gather together the “smartest negotiators in the world,” assign them each a country and renegotiate all foreign trade deals.

46. Put billionaire hedge fund manager Carl Icahn in charge of trade negotiations with China and Japan, and pick an ambassador to Japan who is “a killer,” unlike the current ambassador, Caroline Kennedy.

47. Tell Ford Motor Co.’s president that unless he cancels plans to build a massive plant in Mexico, the company will face a 35 percent tax on cars imported back into the United States. Trump is confident he can get this done before taking office. (Last year he incorrectly said this had already happened.)

48. Force Nabisco to once again make Oreos in the United States. And bully Apple into making its “damn computers” and other products here.

49. Impose new taxes on many imports into the country. Numbers thrown around have included 32 percent, 34 percent and 35 percent.

50. Grow the nation’s economy by at least 6 percent.

52. Cut the budget by 20 percent by simply renegotiating.

53. Get rid of the Dodd-Frank Wall Street Reform and Consumer Protection Act.54. Simplify the U.S. tax code and reduce the number of tax brackets from seven to four. The highest earners would pay a 25 percent tax. The corporate tax rate would fall to 15 percent. Eliminate the “marriage penalty” for taxpayers and get rid of the alternate minimum tax.

56. Ensure that Americans can still afford to golf.

58. Get rid of most corporate tax loopholes or incentives, but continue to allow taxpayers to deduct mortgage interest and charitable donations from their taxes.

59. On his first day in office, Trump would get rid of gun-free zones at military bases and in schools.

60. Use “common sense” to fix the mental health system and prevent mass shootings. Find ways to arm more of the “good guys” like him who can take out the “sickos.” Get rid of bans on certain types of guns and magazines so that “good, honest people” can own the guns of their choice. 61. Impose a minimum sentence of five years in federal prison for any violent felon who commits a crime using a gun, with no chance for parole or early release.

63. Allow concealed-carry permits to be recognized in all 50 states.

64. Sign an executive order calling for the death penalty for anyone found guilty of killing a police officer.

67. On the first day in office, terminate President Obama’s executive orders related to immigration. This includes getting rid of “sanctuary cities” that Trump says have become refuges for criminals.

69. Triple the number of U.S. Immigration and Customs Enforcement officers.

70. Continue to allow lowly paid foreign workers to come to the United States on temporary works visas because Trump says they are the only ones who want to pick grapes. 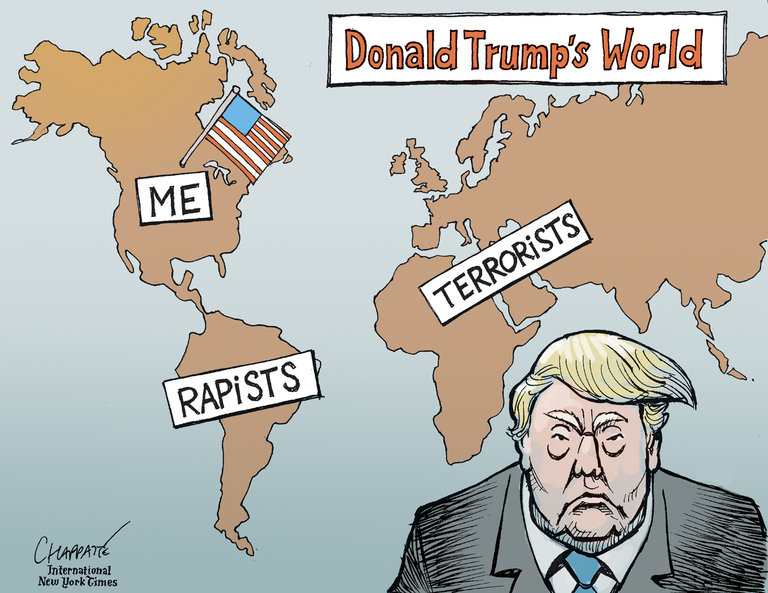 72. Say things that are politically incorrect, because the country does not have time to waste with political correctness.

73. Make America great again — and strong again, as it has become too weak. United States looks more and more like a paper tiger. Won’t be that way if I win!

74. Be a cheerleader for America and bring the country’s spirit back. “Take the brand of the United States and make it great again.”

75. Bring back the American Dream.