I have footnoted a link to the entire very lengthy story that’s very apropos to these times. The story revolves around a young man who vandalized a local mosque. Eventually he writes a letter of regret to the members of the mosque. The rest, you will have to find out yourselves.

On August 26, 2017, Sabrina Tavernise of the New York Times penned the following tale of two young men, “The Two Americans.” (Abraham never fit in. Hisham finally felt at home. Then their worlds collided in western Arkansas.)

“Abraham Davis was sitting on a thin blue pad on the concrete floor of Cell 3 in a jail in western Arkansas when a guard came around with stamped envelopes and writing paper.”

The first person he wrote to was his mother. Abraham, just shy of 21, had barely spoken to her since his arrest a few days before, and he had a lot to explain.

It all began on a night last October when he borrowed her white minivan and drove to the home of a friend. They’d gotten drunk on cheap whiskey. Kentucky Deluxe. Abraham agreed to drive his friend to a mosque in town. His friend drew swastikas and curses on the mosque’s windows and doors while Abraham stood watch in the driveway.

The next day, the vandalism was all over the news. Abraham watched the reports over and over on his phone, his stomach curdling with regret.

Even now, as he was facing up to six years in prison for the act, Abraham could not explain why he had done it.

“He had grown up in Fort Smith, a city of tall oak trees and brick churches that has the look of a faded Polaroid. His father, charismatic but violent, died when Abraham was 5, leaving him with a feeling of powerlessness so intense that he has been trying to conquer it ever since. “Most of my life I’ve spent trying to train myself to become something that’s too strong to be broken through,” he said. Life has teed him up for a fight, and he walks tilted slightly forward, as if someone is pulling him with an invisible wire.”

“As a poor student in the high school on the wealthier side of town, Abraham often felt like an outsider. He walked, not drove, hung out on playgrounds, not in restaurants. He got into a lot of fights. He did poorly in school, but he doesn’t remember his teachers seeming surprised. Expectations were low, and he bent to fit them. He slept a lot in class. At 18, he dropped out.” 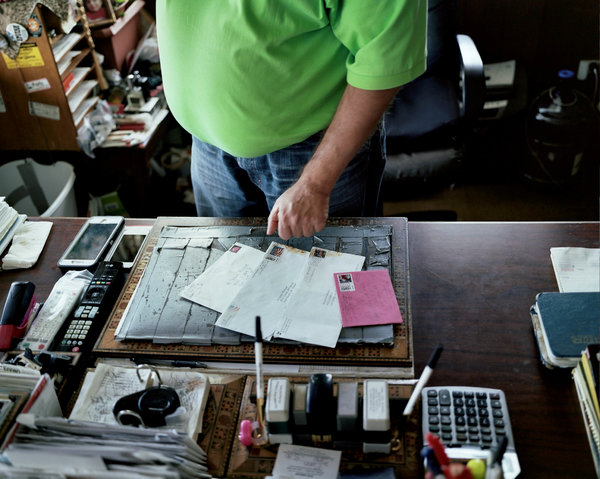 “They never let me go to Dubai,” Hisham said, blowing his nose and wiping his eyes. “Then I went with my American passport, and they stand up straight — they say, ‘You’re welcome, Mr. Hisham!’”

“By early afternoon, the story was breaking.”

“Then something wonderful happened. The mosque’s phone started ringing, and didn’t stop. Churches called. A synagogue called. Buddhists called. So did residents who had seen the news or simply driven by. One man called, crying. His daughter had seen the graffiti on her way to work and told him about it. He said the vandals could not have been Christians. No true Christian would have done it.”

“Anas Bensalah, a mosque member who had taken the day off to help with the cleanup, told the man that he understood completely: That was exactly how he felt every time there was an attack by the Islamic State.

Over the next week, the mosque was snowed under with cards and letters. Some people brought flowers. Most of the letters were from Fort Smith and the surrounding towns, but some were from as far as Reston, Va.

Hisham was overjoyed. He kept them, as if they were jewels, in a drawer in his office.

“No one knows exactly when the first Muslims immigrated to Fort Smith. Dr. Louay Nassri, a pediatric pulmonologist who is the president of Al Salam Mosque and who came to Fort Smith in 1980, said there was at least one Muslim living here in the early 1970s.”

“Nearly 450 people attended the main Ramadan celebration in June, the closest thing the community has to a census. They are for the most part educated, affluent, integrated. Many are doctors. Others are accountants, business owners, professors and teachers.”

“Hisham remembers when they were just a curiosity.”

“Each family adapted in its own way.”

“On the night of Feb. 17, nearly four months after the mosque was vandalized, the police came to Abraham’s house with a warrant for his arrest. Noah thought it was a case of mistaken identity. His brother had been in trouble twice before — once for having pot paraphernalia in his backpack, once for hanging around too late on a playground — but nothing that had required a $15,000 bond.

Abraham wasn’t home, but Noah knew where he was. “Dude, the cops came to arrest you,” he said, driving to pick Abraham up in the minivan so that he could turn himself in. “What’d you do?”

Dr. Nassri called a meeting of senior members of the mosque. Hisham was there. So was Mr. Bensalah, the accountant from Morocco.

The sermon had just reminded them of their duty as Muslims to forgive. It didn’t take them long to do it.

“If one of my kids did something stupid like that I would want them to be forgiven,” Mr. Bensalah said.

“Later, when Dr. Nassri met with a man from the prosecutor’s office, he made clear that the mosque did not want to press charges and strongly opposed a felony charge for Abraham.

“We did not want this to destroy his life,” Dr. Nassri said.

The long wooden benches in the gallery of Courtroom 201 were already packed on May 24, the day of Abraham’s hearing. Nearly everyone was white. Most of the defendants were poor.

The morning unfolded in a relentless stream of misery over crimes like drug possession and writing bad checks.

Kristin and Noah walked in at 9 a.m. sharp. Noah, in his best jeans and plaid shirt, sat with his chin in his hands. Kristin kept nervously shifting in her seat. Hisham walked in, wearing jeans and an electric-lime shirt. He wedged himself in next to Kristin, but had no idea who she was.

Dr. Nassri had gone to meet the prosecutors again. They had bad news: Abraham would have to plead guilty to a felony, not a mere misdemeanor, or face a trial. He would avoid prison, but only if he remained on good behavior for three years. Any minor violation could land him behind bars for six years. The best outcome he could hope for would be to get a judge to seal his record — in eight years.

Dr. Nassri was taken aback. “I said, ‘You guys are asking for more than we want,’” he said. “They call us the victims, and the victims say, ‘Hey, guys, loosen up!’”

“The mosque’s camera had captured Craig in the act of writing, and his punishment was steepest. The prosecutor said that there was no clear proof that either of the other two had done any writing but that no one could know without a trial.”

“The law was straightforward: If the spray painting and other vandalism cost the mosque more than $1,000 to repair, the case was a felony. Anything equal or less than that was a misdemeanor. Dr. Nassri submitted paperwork showing the mosque had spent only $500 on cleanup. But the prosecutor’s office sought its own estimate from a local restoration company, which claimed the damage would cost about $1,800 to clean up.”

“Abraham’s public defender told him that they could attack that evidence at trial. But Abraham wanted to get out of jail.”

“Around 11:15 a.m., he shuffled into the courtroom through a side door in an orange jump suit and leg irons. Craig was with him. Ezra Pedraza, who had been out on bail, wore a plaid shirt and jeans.”

“The prosecutor noted that the victims “asked for mercy and leniency.”

“The judge looked out at the defendants. “Mercy. Hmmm.”

“He accepted their pleas. Then he lectured them.”

“It is summer in Fort Smith. The sun is searing. On Hisham’s car lot, small fruit trees and vegetables grow in dirt-filled kiddie swimming pools. He is already harvesting figs and hot peppers, as well as Syrian thyme and mint that he uses to flavor his visitors’ tea.”

“Hisham believes the vandalism of his mosque was one of the best things to happen to the Muslims of Fort Smith. The crime allowed them to reveal themselves — to say, “We are your doctors, your accountants and your used-car salesmen.” They now have a relationship with the synagogue in town. Several members, including Dr. Al-Shahrouri, the kidney specialist, have begun speaking to local audiences about Islam.”

“Hisham was reminded of a saying from the Quran.”

“But Hisham also doesn’t like how hard it is to get a second chance in America. You can do a stupid thing and pay for it, but afterward no one will hire you. Hisham has helped two men in this situation. They do odd jobs at his car lot. He went to court with them when no one else would. He helped one buy a washing machine, and paid for the other to bury a relative.”

“Someone messes up and it sticks with him all his life,” Hisham said. “Even if he tries to become a good man, the community say to him, ‘You are a bad man!’ They encourage him to be a bad man.”

“For Abraham, jail became a dividing line between the mistakes of his past and some unknown future.”

“When Noah first saw his brother after he was released, Abraham was standing alone outside the jail, holding an envelope and a Bible. Noah parked the car and jumped out without shutting his door, sprinting across the street to embrace him.”

“Kristin wanted to sing a song with her son: “Find Your Wings,” by the Christian singer Mark Harris. They sang, haltingly and softly:”

“I pray that God would fill your heart with dreams.
And that faith gives you the courage to dare to do great things.
I’m here for you whatever this life brings.
So let my love give you roots. And help you find your wings.”

“But he was now a felon, and there were daily reminders of that. A police car regularly circled their block. He had community service to perform, and within a few days he was sorting donations at a Goodwill store.”

“He owed about $3,200 in fines and restitution, but landing a job would be harder now. Kristin found about 20 employers in Fort Smith that hired felons. Abraham wanted to fill out paper applications but was told to apply online. He did not have a computer, which meant he had to go to the library whenever he needed one.”

“His family’s finances had not improved while he was away. The day he started at Goodwill, the water was cut off at the house and the phone was about to be disconnected.”

“He felt embarrassed to tell people what he had done, like the manager at Goodwill, who recognized Abraham from when he used to come in as a boy. But he would feel better afterward, as if confessing was helping him grow some stub of a new self.”

“It was a daily struggle. “I wake up and look in the mirror and I just think, ‘Who are you?’” Abraham said.”

Here’s the link: At an Arkansas Mosque, a Vandal Spreads Hate and Finds Mercy …https://www.nytimes.com. 8/26/17