Risks to military and civilians have increased in Niger since the Chad military fighters recently left Niger after the republican President Donald J. Trump placed Chad on the US travel ban around September 24, 2017, despite the DOD, US State Department, and an array of foreign policy experts advising him not to do this. It turns out that Chadian soldiers were the ones who had kept militant groups like Boko Haram at bay in Niger. In short, any military personnel traveling in Niger will need to be better prepared to face militants that are no longer contained.

About 2 weeks after US army / Niger military convoy came under attack by terrorists, 12 Niger troops were also attacked within 50 miles.

On October 21, 2017,  Joe Parkinson of the Wall Street Journal penned the following report, “Gunmen Kill 12 Niger Troops Near Border With Mali.” (“Attack occurred less than 50 miles from where U.S. soldiers were killed earlier this month.)

“Gunmen mounted on pickup trucks and motorcycles killed 12 paramilitary police from Niger on Saturday, a fresh attack in the restive southwest borderlands with Mali where four U.S. Green Berets were killed earlier this month.”

“The raiding party, which included four vehicles, occurred in the early hours of Saturday in the town of Ayourou in the Tillaberi region, less than 50 miles from where a joint US-Niger patrol was ambushed on Oct. 4, a Nigerien military official said. The men were heavily armed—using rocket propelled grenades and machine guns—the official said. Air and land reinforcements had been deployed and were chasing the militants in the porous border region with Mali.”

“The new attack—which involved no U.S. forces—comes as Niger, the poverty-stricken Sahara desert nation in west Africa, has been vaulted to the top of the Washington news agenda after conflicting accounts of the deadly Oct. 4 raid by suspected jihadists raised questions over U.S. Special Forces operations and broader role in Niger’s remote desert theater. The ambush has also kindled a political firestorm over how President Donald Trump has interacted with the relatives of dead soldiers.”

“One of the Green Berets killed in Niger, Sgt. La David Johnson, was buried in Florida on Saturday.”

“The Federal Bureau of Investigation has joined the investigation into how the Americans were killed, as lawmakers impatient for answers have criticized the Pentagon and the White House for a lack of transparency.”

“Administration officials said it was too early to comment because the Pentagon’s investigation into the deaths of the four soldiers killed in Niger isn’t complete.” “Saturday’s new attacks come after a steady stream of raids against Nigerian forces in the borderlands with Mali. Nigerian officials say there have been at least 40 attacks recorded in the region since (2016.)”

“The raids come amid an expanding regional jihadist insurgency in the poor, sparsely populated Sahel territory south of the Sahara, where competing extremist Islamist franchises have profited from centuries-old contraband and people-smuggling routes.” 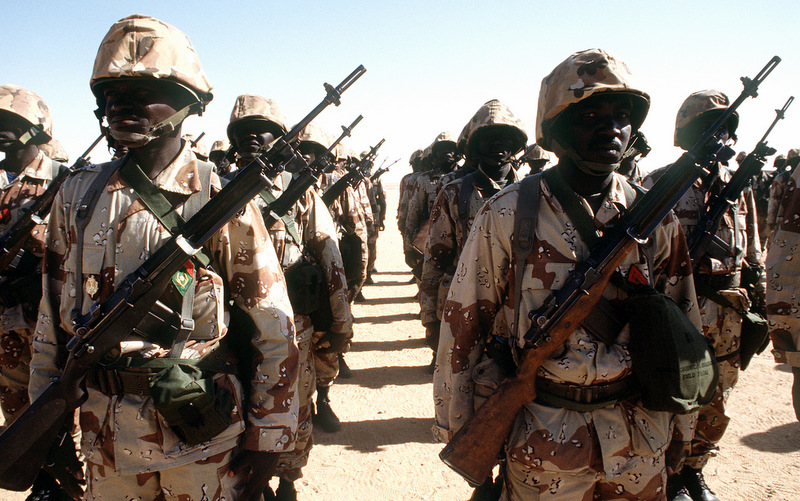 “Terrorism analysts say the localized insurgencies are fusing with Islamic State and al Qaeda, and being supercharged by the chaos in Libya, which has flooded the region with guns, battle-hardened fighters and terror finance. Jihadists have stepped up attacks on civilian targets, regional forces and United Nations peacekeepers since being driven back in northern Mali by a French-led military intervention in 2013.”