“The republican President Donald Trump has been exhibiting a rage filled temper tantrum against his own US Attorney General Jeff Sessions (former US senator from Alabama) for daring to recuse himself from having any involvement in the FBI’s Trump-Russian investigations because he had failed to disclose early on that he had met on more than one occasion with Russian officials when he was part of the president’s campaign staff.”

“Lately the president has been sharing his sense of outrage that while he is being haunted by investigations into his ties to Russia that the former 2016 democratic candidate Hillary Clinton for her possible transgressions regarding her ties to Russia and the FBI not fully vetting her mishandling of classified emails while she was secretary of state. Both of the president’s assertions have been looked into by appropriate government agencies and it has been determined that her actions do not meet the standard to where criminal charges would be filed against her.”

On Monday, 11/13/17, it looked like Mr. Sessions was giving serious consideration to appointing a special counsel to delve into the president’s complaints about Mrs. Clinton. By Tuesday (11/14/17), he backed away from this thinking as the professional staffers who perform their duties in a non partisan manner within the US Department of Justice balked at being used to appease the president’s personal political grudges.

“Attorney General Jeff Sessions’s public suggestion that he may appoint a special counsel to investigate Hillary Clinton has alarmed current and former Justice Department officials who fear he will further politicize the embattled agency.”

“Sessions said at a congressional hearing Tuesday (11/14/17)  that he will weigh recommendations from senior prosecutors on whether to appoint a special counsel over a 2010 uranium company deal and other issues, including donations to the Clinton Foundation.” 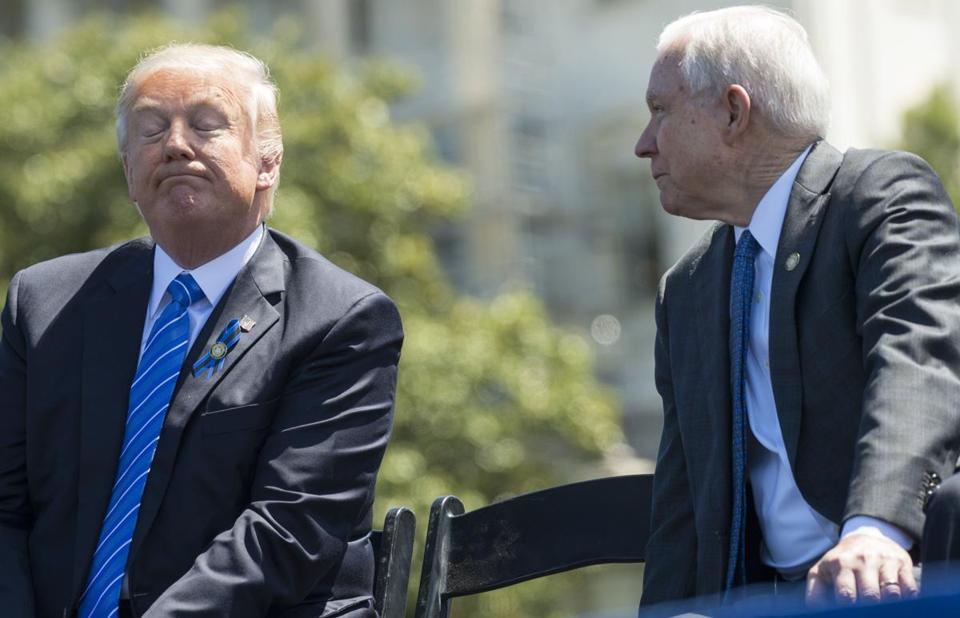 “Such an appointment could give President Trump and Republicans a political counterweight to the ongoing work of special counsel Robert S. Mueller III, who is probing whether any Trump associates coordinated with the Russian government to interfere in last year’s presidential election.”

“For that reason, Sessions’s suggestion has raised fresh questions about the independence of the Justice Department in the Trump administration.”

“To have the winning side exploring the possibility of prosecuting the losing side in an election — it’s un-American, and it’s grotesque,” said John Danforth, a former special counsel who investigated the FBI’s role in a violent standoff with a cult in Waco, Tex. “The proliferation of special counsels in a political setting is very, very bad.”

“Peter R. Zeidenberg, who once served as deputy special counsel in the probe of former White House aide Lewis “Scooter’’ Libby, said “the best-case scenario” is that the attorney general is trying simply to mollify an angry president and doesn’t really plan to name a special counsel.”

“If one is appointed to probe Clinton matters, “I think the vast majority of people at DOJ would be completely disgusted and demoralized by it,’’ said Zeidenberg, referring to the Justice Department. “They don’t like feeling that they are political tools to be used by the president.’’

“A federal law enforcement official, who spoke on the condition of anonymity to comment freely, said the move is particularly frustrating because many of the subjects Sessions says could fall under the purview of a special counsel were previously investigated by the FBI or are under investigation by the Justice Department’s inspector general.” “Sessions insisted in his testimony (before US Congress on 11/14/17) that he is not leaning one way or the other on the appointment of a new special counsel and that he is awaiting a detailed presentation from senior officials at the Justice Department.”

“The first year of the Trump administration has been a turbulent one for the Justice Department. FBI Director James B. Comey was fired. The president has repeatedly and publicly attacked the department, the FBI and senior officials at those agencies.”

“In several angry tweets Nov. 3, the president called again for investigations of Clinton and Democrats, saying, “at some point the Justice Department, and the FBI, must do what is right and proper. The American public deserves it!’’

“Current and former Justice Department officials could not recall the last time the department publicly dangled the possibility of a special counsel appointment.”

“Also unclear Tuesday was how Sessions might appoint such a special counsel for some of the issues, given that he has recused himself from investigative matters involving the 2016 campaign due to his vocal support of Trump and fierce public criticism of Clinton.”

“One of the areas that Republicans want investigated is whether donations to the Clinton Foundation may have been tied to political favors by Clinton or any of her subordinates when she was secretary of state. The FBI probed that issue in 2015 and 2016, but Justice Department officials decided there wasn’t enough evidence to pursue a full-fledged investigation. A separate Clinton Foundation-related federal probe has been ongoing in Virginia, but its final disposition is still unclear, according to people familiar with the matter.”

“In his testimony, Sessions did say that he believed his recusal would not bar him from appointing a special counsel to investigate possible wrongdoing involving Uranium One, a Canadian mining company with U.S. assets that was purchased by Russia’s nuclear energy agency. Republicans have suggested that the deal, which required U.S. approval from a multi agency board that included Clinton’s State Department, should have been blocked because of a separate corruption probe involving Russian uranium shipments.” 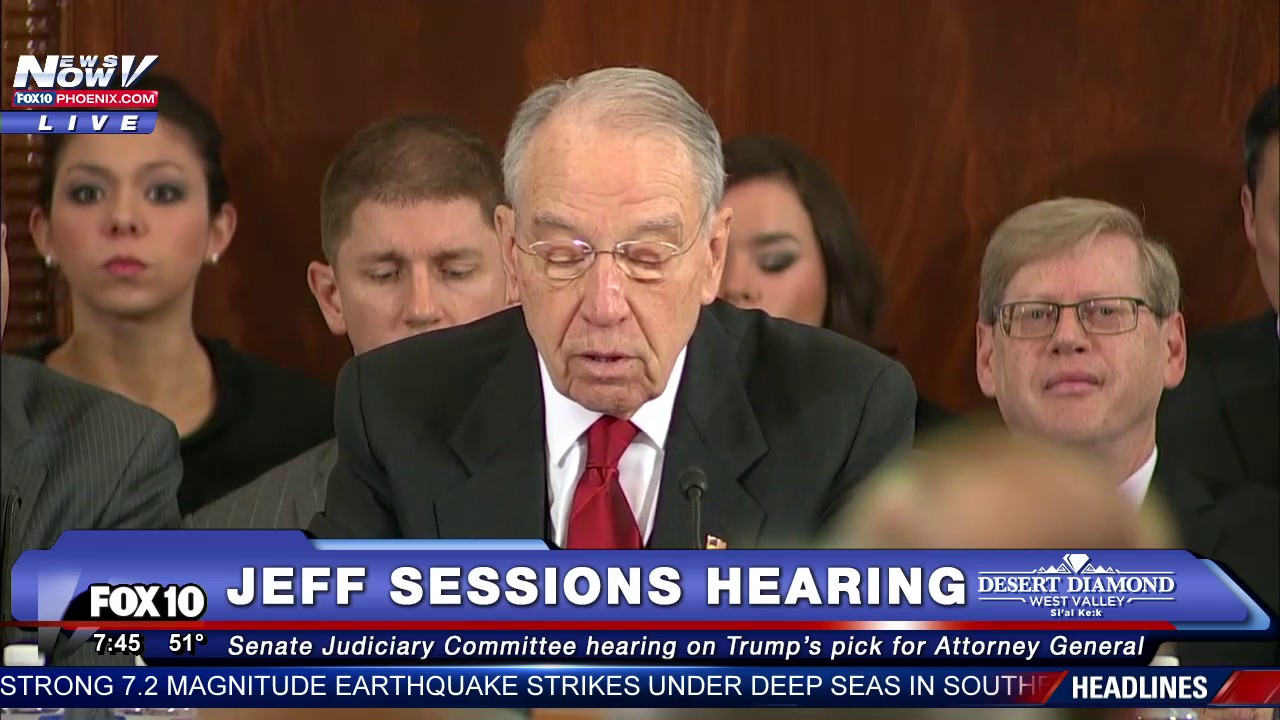 “Yet the attorney general also offered a mild rebuttal to suggestions by some of his fellow Republicans that there are clear connections in the uranium case that need further investigation, noting that the approval of the deal was two or three years removed from the key events in the corruption probe.”

“Some conservatives say a special counsel appointment could have consequences far beyond Clinton. Fox News host Sean Hannity, who is also an informal adviser to the president, has called for a special counsel to probe the uranium deal and has said that because Mueller was the director of the FBI at the time Uranium One was purchased, Mueller should be removed from his role probing the Trump White House.”

“Former federal prosecutor Andrew McCarthy said he doubted there was any prosecutor appointment or assignment that would lead to Mueller stepping down.”

“It seems they’re frustrated by the Mueller investigation, and they think, ‘Why don’t we get one to look at the Clinton stuff?’ And that’s just not the way it’s supposed to work,” he said.

“McCarthy also said he thought it was a mistake, legally and politically, for the Justice Department to publicly suggest that it might appoint a special counsel.”

“I don’t know what Sessions is going to do here, but I don’t see any good reason for the Justice Department, in a situation where it’s not the administration investigating itself, to appoint a special counsel,” he said. “You should never float the idea on your side, because when you float the idea, you are at least suggesting there’s a possibility you may not be capable of doing the job yourself for ethical reasons.”