US House Republicans have voted on a bill that includes dozens of tax cuts and tax increases for individual and corporate taxpayers. The measure would add more than $1.4 trillion to the federal debt over 10 years and thus, it would be in addition to  (US deficit at $20 trillion dollars in 2017 which rises to $30 trillion dollars in 2027), according to an analysis by Congress’s Joint Committee on Taxation.

The republicans in the US Congress and the White House have kept consistently on message that the tax-cuts in total will cost less than 1.5 trillion dollars. What they did is, they agreed to this amount in their budget process which then allows them to pass their tax cut bill by a simple majority in the US Senate of 51 votes versus the normal requirement of 60+ votes for passage. This 60+ vote requirement would be mission impossible, as no democrat would ever vote for this monstrosity of a tax cut bill.

So now you know why republicans are rushing passage of this tax cut bill. They cannot afford for the public to figure out that they are planning to pass the largest tax increase in US history for the middle class/ poor to provide the biggest tax cut ever for their donor class and for themselves.

As per a 11/15/17 NY Times interactive report lists conclusions as detailed below (See link below for entire article about the US House tax bill.):

The bill would cut $5.9 trillion in taxes over 10 years, including a reduction in the corporate tax rate, a larger standard deduction and cuts to individual income taxes.

The Devil Is In The Details…

“To help pay for these changes, it would raise $4.5 trillion in part by cutting numerous deductions for individuals and repealing the personal exemption.”

“The plan would not completely pay for itself; it would add more than $1.4 trillion to the federal debt over 10 years. (Republicans signed off on a $1.5 trillion increase in their latest budget.)”

“To help pay for these cuts, the bill would repeal the personal exemption, a deduction currently worth $4,050 for each filer and for each dependent. ($1.6 trillion in new revenue)”

“There is the “standard deduction roughly double its current size ..$ (921.4 billion in cuts); and a repeal of the alternative minimum tax, which primarily affects households with incomes from $200,000 to $1 million. ($695.5 billion in cuts)”

“The bill would also repeal several education-related tax breaks, including for interest on student loans.  ($64.8 billion in new revenue.)”

“It would repeal several other tax credits and exclusions and newly require a work-eligible Social Security number to claim certain credits. It also would make changes to retirement plan rules. ($93.8 billion in new revenue)”

“The bill uses a less generous measure of inflation that would tax more individual income and devalue certain tax credits over the long run. ($128.2 billion in new revenue)”
“Additional money is raised by eliminating several deductions, including ones for state and local income taxes and for medical expenses, and limiting the deductions  for mortgage interest and property taxes. ($1.3 trillion in new revenue)”

“In total, the new revenue in the bill is not enough to pay for all of the tax cuts.”

On  December 1, 2017, Ryan Grim of the Intercept penned the following report on the US Senate’s version of the tax cut bill, “The GOP Plan Is The Biggest Tax Increase In American History, By Far.”

“THE TAX BILL moving its way through Congress is routinely referred to as a $1.5 trillion tax cut. And, in some ways, that’s true: on net, it would reduce the amount of taxes collected by the federal treasury by about $1.5 trillion over 10 years.”

“But that figure masks the eye-popping scale and audacity of the GOP’s rushed restructuring of the economy. Most immediately, the plan will take a large chunk out of state and local revenue that isn’t factored into that total. But more broadly, the bill cuts taxes by a full $6 trillion over a decade.” 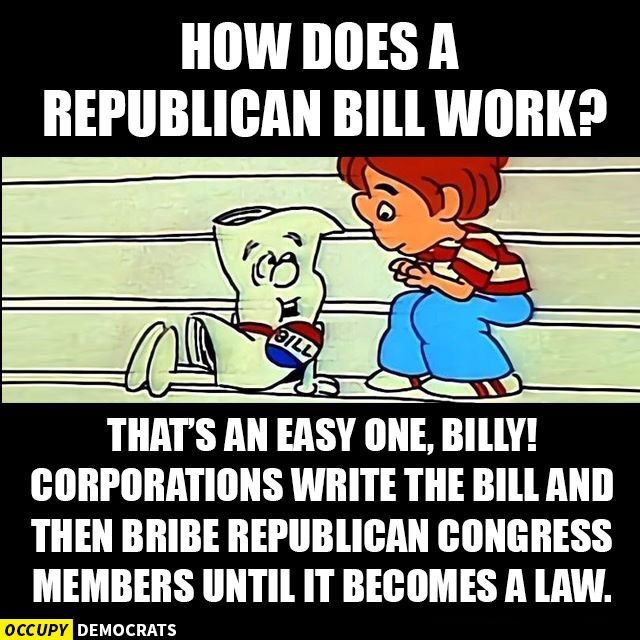 “Senate Majority Leader Mitch McConnell, R-Ky., said Friday afternoon Senate  Republicans  have the votes to pass the plan, (which did pass am of Dec. 2) which gets referred to as only a $1.5 trillion cut because it raises $4.5 trillion in taxes elsewhere. But the key question is who gets a tax hike and who gets a tax cut. Put simply, the bulk of the tax cut is going toward the rich, while the tax increases go to everybody else.”

“And so the bill, properly described, is two things: the largest tax cut — and also the biggest tax increase — in American history.”

“Republicans have spent years describing the Affordable Care Act as the largest tax increase in U.S. history, ignoring the fact that the tax increases were balanced out by subsidies to pay for health coverage. In that respect, the ACA was a significant transfer of wealth from the top to the middle and bottom, which earned it the ire of the GOP. But all told, it raised less than $1 trillion in taxes over 10 years to pay for all that. The relative stinginess, in fact, is what fueled its unpopularity, as premiums and deductibles remained too high. But what Republicans lambasted as a historic tax hike represents just one-fifth of the tax increase of the new GOP bill.” 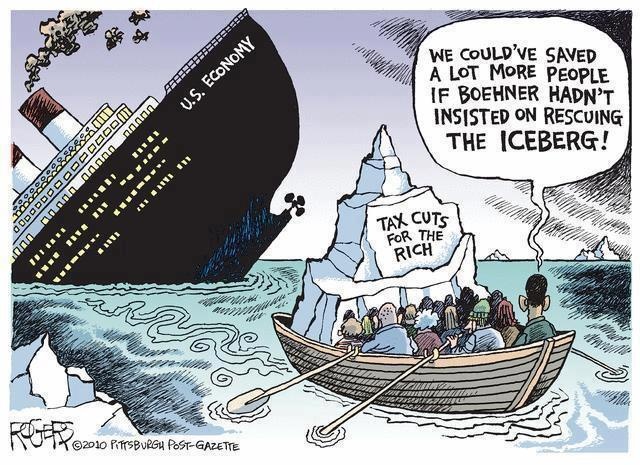 “The Tax Policy Center estimated that about 80 percent of the benefit of the tax plan will go to the top 1 percent, who will enjoy the following elements of the tax cut:”

“A full $1.5 trillion alone is going to slash the corporate tax rate. CEOs have said repeatedly they plan to pocket that money rather than invest it or give workers higher wages.”

“Another $150 billion goes to repealing the estate tax, which currently exempts the first $11 million of the deceased’s estate, so nobody even remotely middle class pays it. The repeal benefits so few people you can practically list them out.”

“More than $200 billion in cuts goes to a provision that allows a greater deduction for dividends on foreign earnings. That’s not for you.”

“Roughly $600 billion goes to reducing taxes on “pass-throughs” and other businesses not set up as corporations, which law firms, lobby shops, and doctors’ offices often benefit from. Poor and middle-class people do not tend to set themselves up as pass-throughs.” 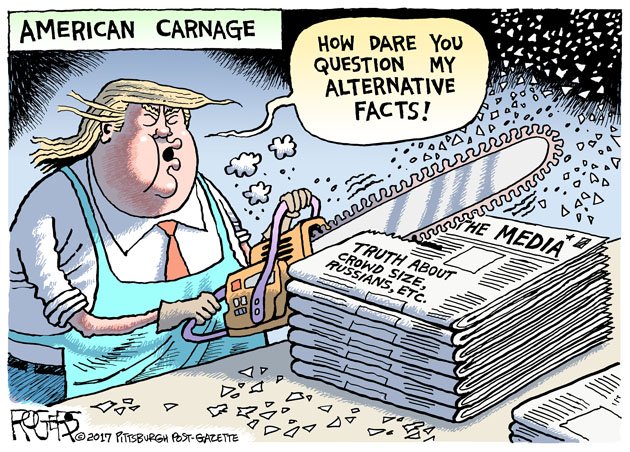 “Under current law, many tax credits phase out at low-income thresholds. The GOP plan changes that by raising the threshold so richer people can also claim the credit. That provision alone is, by definition, a $200 billion tax cut for the wealthy.”

“Individual and family tax rates are cut by about $1 trillion, and some regular people will indeed see some of that money as a tax cut — but not much. As the New York Times noted, by 2027, people making between $40,000 and $50,000 would see a combined increase of $5.3 billion in taxes. Where would that money go? Folks earning more than $1 million would see their taxes collectively cut by $5.8 billion a year.”

“The list above brings the total well close to $5 trillion in tax cuts almost exclusively for the wealthy. The last major element of the bill, the doubling of the standard deduction, would benefit a broader range of people, but it comes at the expense of states, cities, and towns.”

“Where does the money to pay for all of this come from?”

“While Obamacare was a transfer of wealth from the top to the bottom, this bill sends money back the other way.”

“Even some of the ways the plan “raises” taxes on the rich wind up being a tax cut. Some $300 billion is raised by allowing companies who stashed profits offshore to repatriate it at a much lower rate. That repatriated cash will go straight to dividends for shareholders and stock buybacks — but it gets counted as a tax increase, which then allows the GOP to give an equal $300 billion cut on the other side of the ledger. It’s neat how that works.”

“The bill raises $1.6 trillion by repealing the personal exemption everybody gets on their tax returns. Getting rid of it across the board is extraordinarily regressive, since it gives the same benefit to the likes of Jared Kushner as it gives to people who have much less money than he does, so they’re hit much harder.”

“It raises another $1.3 trillion by going after deductions for state and local taxes, mortgage interest, charitable contributions, interest on student loans, medical expenses, teachers’ out-of-pocket expenses for paper and pencils for students, and a bunch of other nickel-and-diming of the middle class. No change drawer in the car, couch cushion, or plastic piggy bank is going untouched in the hunt for money to pay for the tax cut.”

“(The state and local deduction is effectively a subsidy for state and local spending on things like schools, roads, and police departments. Removing that will pressure states and cities to cut spending, so future teacher layoffs at your neighborhood school will be used to pay for the tax cuts, but because that happens at the state and local level, it isn’t factored into the Congressional Budget Office or Joint Committee on Taxation analyses.)”

“The plan gradually raises $128 billion in taxes by changing the way inflation is tabulated, so that your taxes slowly creep up over the years as the brackets come down.”

“And then, of course, the plan adds about $1.5 trillion to the debt over 10 years. That gets you most of the way to $6 trillion, with a handful of smaller tax hikes thrown in, some of which won’t obviously hurt the middle class. The domestic production deduction, a $96 billion boondoggle, is repealed, for instance, and $54 billion is saved by ending the credit for testing cures for rare diseases.”

“What does it say that — in practice according to independent analyses, I mean you do have winners and losers, not everybody gains, businesses gain, people with large estates to leave to their heirs gain, high-income people gain — but a lot of middle-income people do not gain in terms of money,” NPR’s Steve Inskeep said.

“I disagree with that. The average tax cut for a middle-class family is going to be $1,182,” Ryan responded.

Inskeep pushed back. “Lily Batchelder of New York University took some numbers from the Joint Committee of Taxation, bipartisan part of Congress as you know very well, and concluded that something like 100 million households in this country under the House bill, and even more under the Senate bill, would either get no tax cut or would get a tax increase,” Inskeep said. “Does that sound right to you?”

It didn’t sound right to Ryan.

For the best lowdown regarding US Congress republican tax cut bill read: Every Tax Cut and Tax Increase in the House GOP Bill – The New York  https://www.nytimes.com/interactive/2017/11/.