While the republican President Donald Trump has been sucking up the news media oxygen, there have been major US stories not getting the press coverage at a level that would have occurred in the past. One is about a serial bomber wreaking havoc in the city of Austin, Texas during the month of March 2018 and the other is about the collapse of a newly constructed pedestrian bridge in the Miami, Florida area. Both events involve fatalities.

The Florida International University’s “instant bridge” collapse on the 15th of March 2018, follows the February 2018 Parkland, FL. High School mass shooting tragedy, where in both cases, peoples stepped forward to warn about an imminent danger but nothing was done.

Two contractors involved in its construction have been cited in the past with numerous violations. As per a 3/17/18 FOX News report by Greg Norman, ” two firms responsible for building Florida International University’s “instant bridge,” which suddenly collapsed Thursday and left six people dead, are coming under increased scrutiny as details emerge of past engineering failures and inspection fines — including a recent accusation that one hired “unskilled” and “careless” workers.”  (See: Companies Behind FIU Bridge Collapse Had Safety Violations | Time)

Americans are sick of the argument by partisans that there should be less government when they know that some government is a necessity, but what they want in exchange for their tax dollars, is for government entities to work with an eye towards attaining a level of competence, professionalism and accountability. Frankly, these standards appear to be lacking in the State of Florida. “A lead engineer responsible for a pedestrian bridge that collapsed near Miami left a voice mail for a state transportation official warning of “some cracking” two days before the structure crashed, state officials said Friday night (3/16/18).”

“The engineer with the private contractor FIGG Bridge Engineers did not consider it a safety issue, he said in the call. The message was not retrieved until Friday (3/16/18) because the Florida Department of Transportation official to whom the voice mail was directed was out of the office on assignment, the state agency said. The message about the bridge being built to connect Florida International University with a neighboring city was left on a land line.” 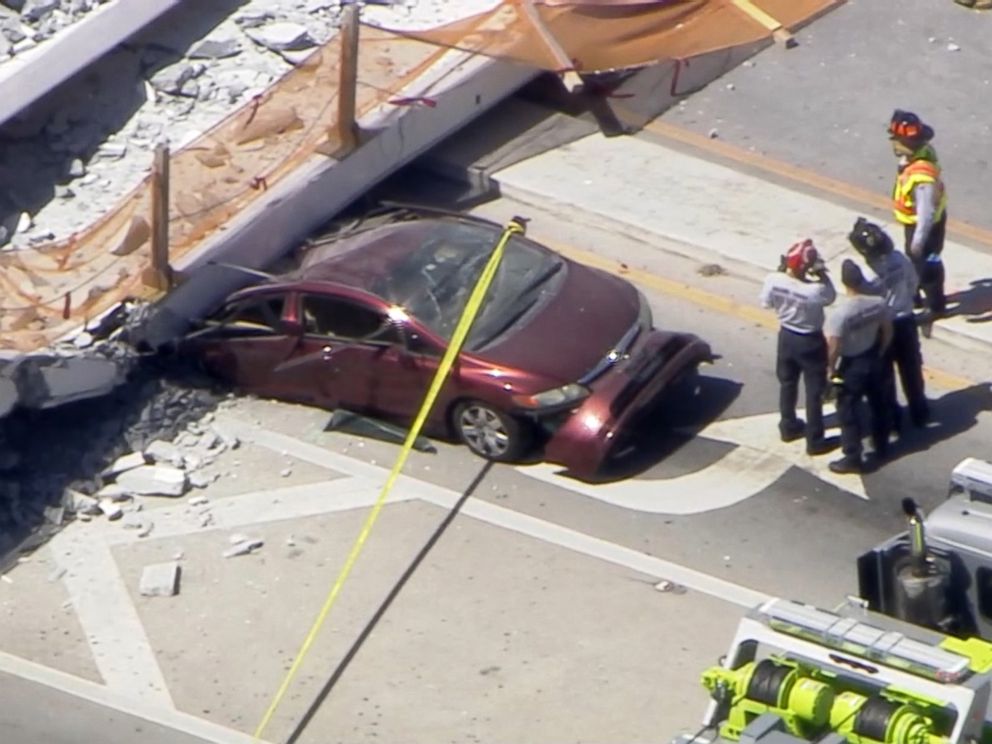 “Hey Tom, this is Denney Pate with FIGG bridge engineers. Calling to, uh, share with you some information about the FIU pedestrian bridge and some cracking that’s been observed on the north end of the span, the pylon end of that span we moved this weekend,” the engineer said, according to a transcript of the call released by the Florida Department of Transportation.”

“Um, so, uh, we’ve taken a look at it and, uh, obviously some repairs or whatever will have to be done but from a safety perspective we don’t see that there’s any issue there so we’re not concerned about it from that perspective although obviously the cracking is not good and something’s going to have to be, ya know, done to repair that.”

“FIGG Bridge Engineers, which designed the span, promised in a statement Friday night it is “carefully examining the steps that our team has taken in the interest of our overarching concern for public safety.”

“The company added — in an apparent reference to its engineer’s conclusion that safety was not an issue — that “the evaluation was based on the best available information at that time.”

“The company’s statement said employees are “heartbroken by the loss of life” and pledged: “We will pursue answers to find out what factors led to this tragic situation.”

“In its statement, the transportation agency pointed to another potential missed opportunity to identify problems.”

“On Thursday, shortly before the bridge collapsed, a consultant to the department met with members of the team responsible for the project. There was no mention of safety concerns regarding the structure at that meeting, the state said.”

The university later added a more detailed recollection of the Thursday meeting. It was convened by FIGG and Munilla Construction Management (MCM), which built the bridge, “to discuss a crack that appeared on the structure,” the university said.

“The FIGG engineer of record delivered a technical presentation regarding the crack and concluded that there were no safety concerns and the crack did not compromise the structural integrity of the bridge,” the university said in a statement, adding that representatives of the school and the state Department of Transportation attended the session, which lasted two hours.” 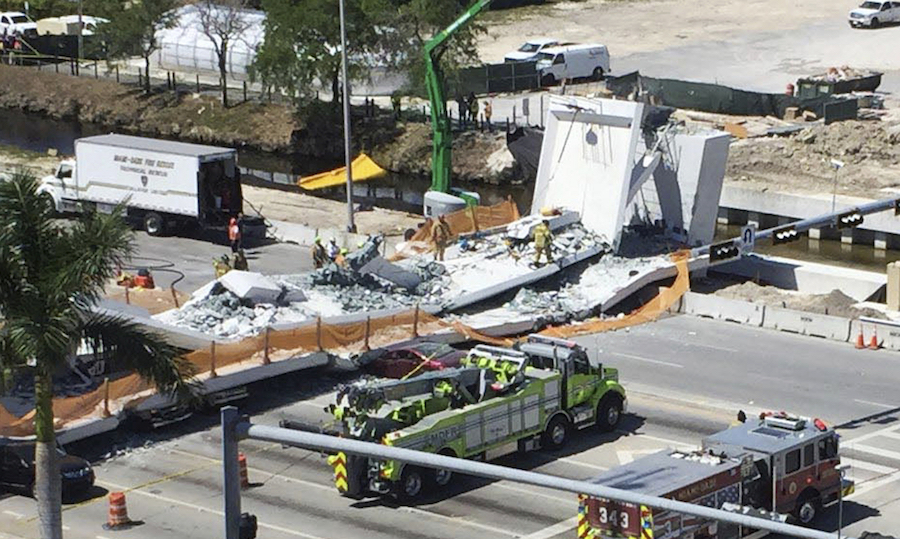 “The transportation agency said it released the voice-mail recording in the service of “full transparency.”

Asked what prompted the disclosure, an official pointed to a statement that accompanied the call transcript: “As FDOT assists in these investigations, we will continue our internal review and release all pertinent information as quickly as possible while ensuring its accuracy.”

Earlier Friday, authorities had made a grim announcement: The death toll in the bridge collapse had climbed to six — and more victims may be buried in the rubble.

“Our first priority is getting to those victims,” Juan Perez, director of the Miami-Dade Police Department, said Friday morning. But, he added, it is a slow and painstaking process to break the debris into smaller pieces for removal, and to reach the vehicles that were crushed when the 960-ton span collapsed Thursday afternoon.” 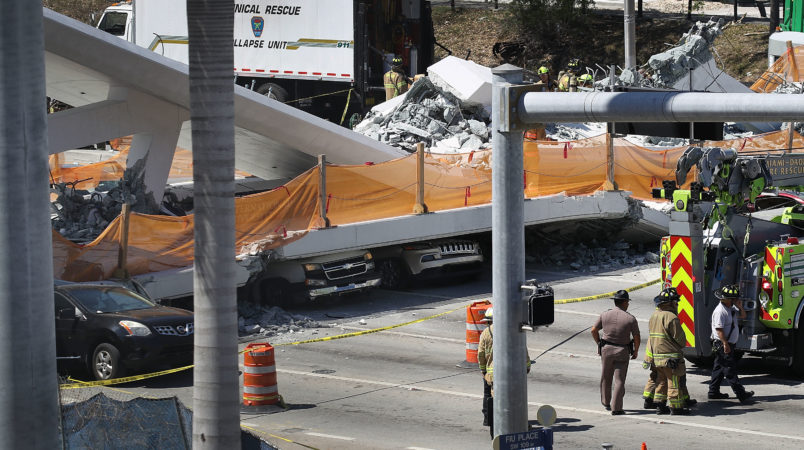 “The foot bridge was still being installed when it came crashing down. Sen. Marco Rubio (R-Fla.) said suspension cables on the bridge “were being tightened when it collapsed.”

“Sweetwater Mayor Orlando Lopez said Friday that one of the victims in the accident was an FIU student. “We are truly saddened to hear that,” Lopez told reporters at a news conference.”

“An Ecuadorian official, Maria Fernanda Espinosa, announced on social media Friday that Alexa Duran, the 18-year-old daughter of an Ecuadorian father, had been killed in the collapse. A friend of Duran told the Miami Herald that the FIU student was the funniest person she knew, someone who always lit up any room.”

“Krista Schmidt, president of the Student Government Association at FIU, announced there would be a memorial Wednesday. “ 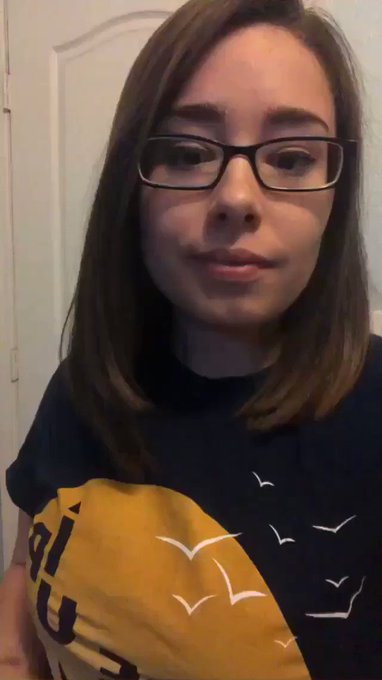 No words can explain the sadness that I feel about the loss of Alexa Duran. All of the amazing things that people say about her really paints a picture of the beautiful soul that she has. To the sisters of @AXiD_FIU , please know that you have a huge support system. RIP

Twitter Ads info and privacy
” Perez, the police director, said officials would not speculate about the likely number of fatalities until the recovery process is complete. Authorities want to bring closure to worried family members, he said, but can’t confirm identities of who is underneath the rubble. “We’re caught in a bad place right now,” he said.”

“Our primary focus is to remove all of the cars and all of the victims in a dignified manner and not compromise the investigation in the process,” Miami-Dade County Deputy Mayor Maurice Kemp said Friday. “The investigation is vital because we want to ensure that this type of accident doesn’t happen again locally, or anywhere in this country.”

“The National Transportation Safety Board, the Occupational Safety and Health Administration and the Federal Highway Administration are investigating, as are homicide detectives with the county police department. A team of county prosecutors arrived at the scene Friday, as well. “