On the evening of the 26th June, 2018, an earthquake has shaken up the establishment Democratic Party leaders as their favored Rep. Joe Crowley, D-N.Y., one of the highest-ranking Democrats in the US House of Representatives, just lost his 20 year job to a 28-year-old member of the Democratic Socialists of America who had never previously held an elected office.

Another democratic star, Alexandria Ocasio-Cortez unseated the congressman thought to be next in line to lead House Democrats who outraised her 10-to-1 in the Bronx and Queens district.

“She has never held elected office. She is still paying off her student loans. She is 28 years old. “Women like me aren’t supposed to run for office,” Alexandria Ocasio-Cortez said in a viral campaign video released last month.

They certainly weren’t supposed to win.” 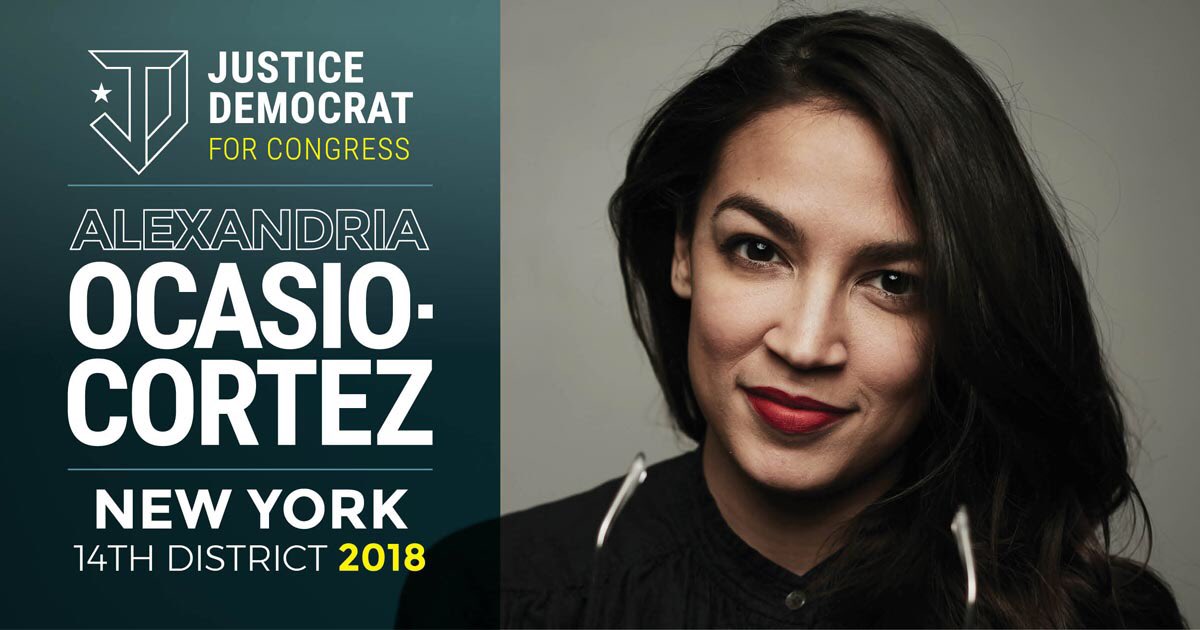 “But in a stunning upset Tuesday night that ignited the New York and national political worlds, Ms. Ocasio-Cortez, a Bronx-born community organizer and member of the Democratic Socialists of America, defeated Representative Joseph Crowley, a 19-year incumbent and Queens political stalwart who had not faced a primary challenger in 14 years.”

“Mr. Crowley, who is twice Ms. Ocasio-Cortez’s age, is the No. 4 Democrat in the House of Representatives and had been favored to ascend to the speaker’s lectern if Democrats retook the lower chamber this fall.”

“If Ms. Ocasio-Cortez defeats the Republican candidate, Anthony Pappas, in the predominantly Democratic district in November, she would dethrone Elise Stefanik, a Republican representative from Central New York, as the youngest woman ever elected to Congress (Ms. Stefanik was 30 when she took office in 2015).” “The daughter of a Puerto Rican mother and a Bronx-born father, Ms. Ocasio-Cortez earned a degree in economics and international relations from Boston University but worked as a waitress and bartender after graduation to supplement her mother’s income as a house cleaner and bus driver, according to The Intercept. Her father, a small-business owner, had died three years earlier of cancer; after his death, her family fought foreclosure and her mother and grandmother eventually moved to Florida.” 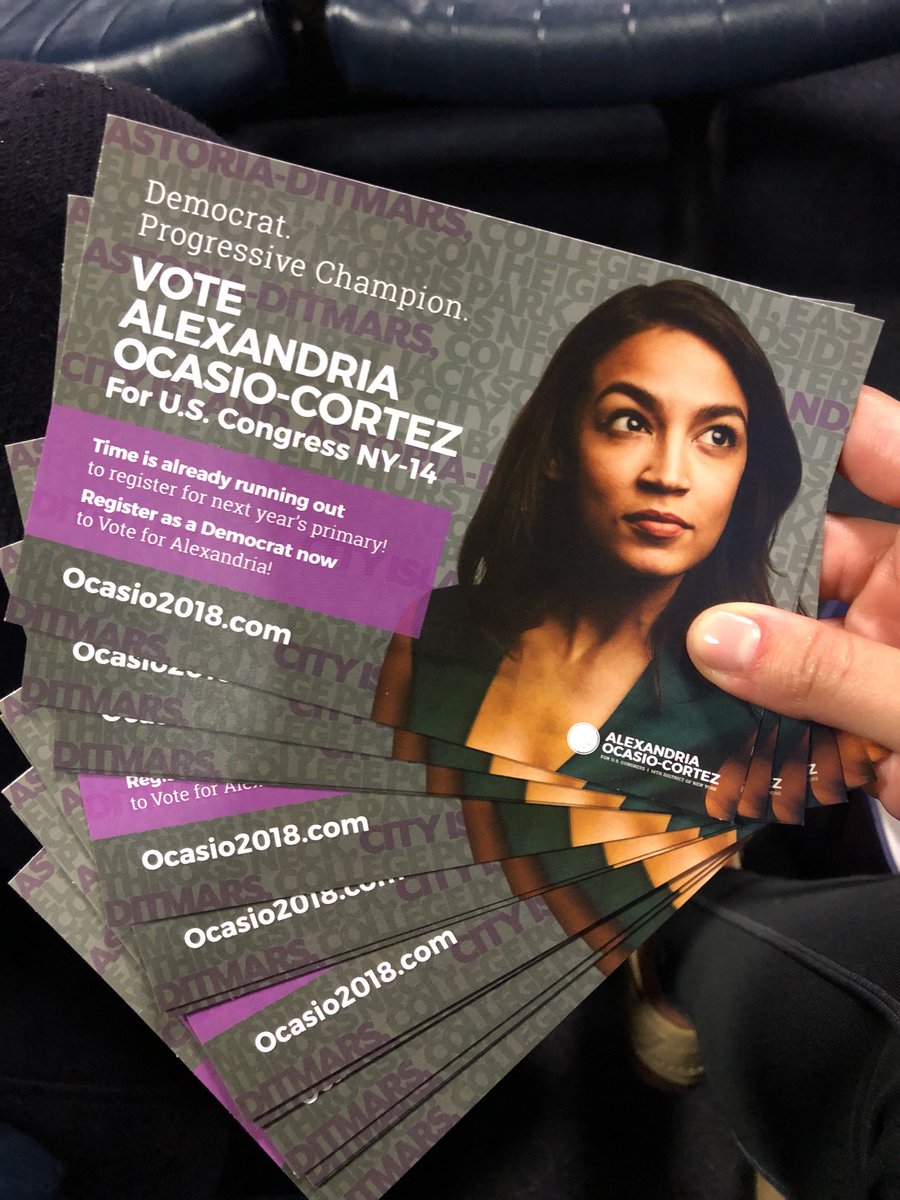 “She dabbled in establishment politics during college, working for Senator Edward M. Kennedy, Democrat of Massachusetts, on immigration issues, but soon turned her attention to the grass-roots work that would come to define her candidacy.”

“Returning to the Bronx after graduation, she began advocating improved childhood education and literacy, starting a children’s book publishing company that sought to portray her home borough in a positive light, according to a 2012 article in The New York Daily News. The importance of education had been instilled in her from a young age: As a child, she was sent to school in Yorktown in Westchester County because of the dearth of quality schools in the Bronx.”

“She returned to national politics when she worked as an organizer for the 2016 presidential campaign of Senator Bernie Sanders, independent of Vermont.” 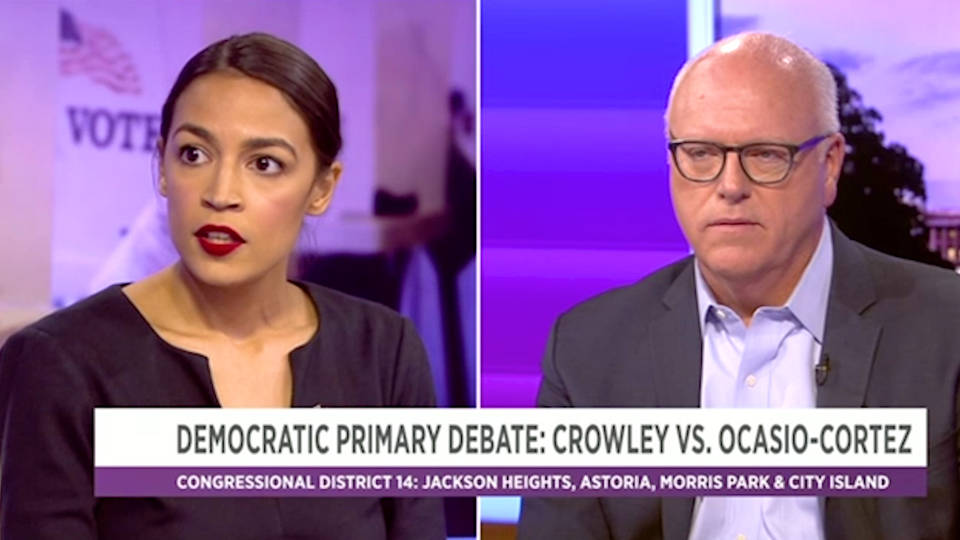 “I never really saw myself running on my own,” she told New York magazine this month. “I counted out that possibility because I felt that possibility had counted out me. I felt like the only way to effectively run for office is if you had access to a lot of wealth, high social influence, a lot of dynastic power, and I knew that I didn’t have any of those things.”

“But if Ms. Ocasio-Cortez has, overnight, become the face of progressives’ hopes for ousting not only Republicans but also moderate Democrats who they see as insufficiently outraged about President Trump, her bid against Mr. Crowley predates the anti-Trump backlash.”

“She has credited her decision to seek office with her experience protesting at the Standing Rock Sioux Reservation in 2016 against the Dakota Access Pipeline. Soon after, she was contacted by Brand New Congress, a newly formed progressive organization that asked her to run.”

“Ms. Ocasio-Cortez, who has called for Medicare for all, tuition-free public colleges and the abolition of the Immigration and Customs Enforcement agency, made her underdog status the central pillar of her upstart campaign.”

“In her bid against Mr. Crowley, she was unafraid to foreground race, gender, age and class. When Mr. Crowley sent a Latina surrogate to debate Ms. Ocasio-Cortez last week, citing scheduling conflicts, Ms. Ocasio-Cortez blasted him on Twitter for sending someone with a “slight resemblance to me.” She attacked Mr. Crowley for taking corporate money, for not living in the district and for looking increasingly unlike the constituents of the Bronx and Queens he was elected to represent.”

In a bizarre twist, Rep. Crowley sent a woman with slight resemblance to me as his official surrogate to last night’s debate.@repjoecrowley’s surrogate said he is in full support of Trump’s embassy change in Israel last month (where 60 people died).

The community was in shock.

Why would she agree to do this?

This is the ugly side of the Democrats on full display, pitting one woman of Latin descent against another #NY14 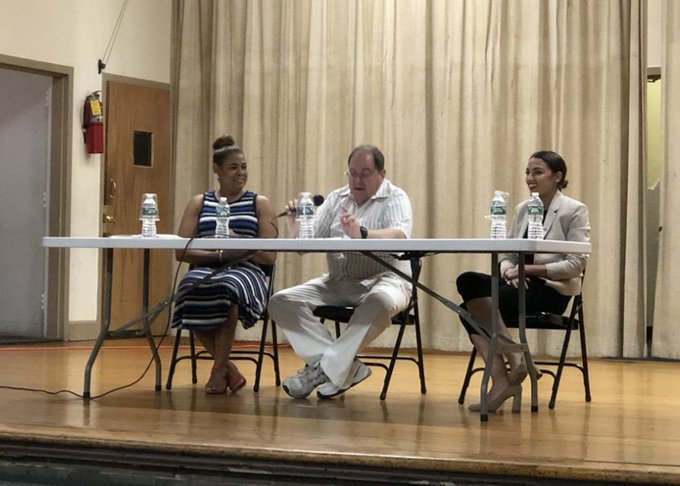 “These communities have been so ignored,” she said in an interview with The New York Times earlier this month. “What other leaders or what other choices does this community even have? For me, I just feel like it’s a responsibility to show up for this community.”
“She has joined activists in Flint, Mich., calling for safe drinking water, and traveled to the Mexican border this past weekend to protest family separations of migrants.”

“Like Mr. Sanders, Ms. Ocasio-Cortez made her rejection of corporate donations and reliance on small donors a rallying cry for supporters; nearly 70 percent of her campaign funds came from individual contributions under $200.

“Not all Democrats are the same,” she said in her May campaign video, adding — her voice rising with emotion — that a Democrat who “doesn’t send his kids to our schools, doesn’t drink our water or breathe our air cannot possibly represent us.”

“Congress is too old,” she told a reporter from the website Elite Daily. “They don’t have a stake in the game.”

“Before Tuesday’s victory catapulted her to the front of the political conversation, Ms. Ocasio-Cortez seemed to find readier audiences with outlets such as Elite Daily, Mic or Refinery29 — websites most often associated with millennial and female audiences — than with national publications.”

“Still, shock seemed to be the predominant emotion at Ms. Ocasio-Cortez’s party on Tuesday. “Oh my God, oh my God,” she said as she realized she had won, her hands flying to her mouth and her eyes widening. Throughout the night, as more and more people flooded into the packed Bronx pool hall, Ms. Ocasio-Cortez was trailed by a swarm of reporters, supporters and campaign staff clamoring for hugs, selfies or just a glimpse of the woman behind a feat many had considered impossible.”

“She added, “I hope that this reminds us of what the Democratic Party should be about, which is, first and foremost, accountability from the working-class people.”