I’ve taken a page out of Mr. Cohen’s testimony when he described how the republican President Donald Trump directs those around him in his daily reality show which often does not reflect what’s real or true. Those who want to participate in his show have to tow the line like the GOP Senator Lindsey Graham from SC  has done, by undergoing a personality transformation and not for the better.

The presidency has been granted an abundance of powers that is ripe for abuse for someone like President Trump who feels compelled to act in a way that’s consistent with his version of reality. In his worldview, his senior adviser and son-in-law Jared Kushner who the president trusts absolutely, knowing that he’ll do whatever is asked of him, merits a top level security clearance.

The president’s truth is that Jared Kushner deserves this top secret clearance even though several levels of government officials had decided, otherwise. The president believes that he knows better to where he deemed to order his chief of staff at the time, General John Kelly to make sure that his son-in-law was granted this top ‘secret clearance’ status, pronto. However, many of the players involved in this activity were so dismayed by the president’s orders that they wrote permanent memos in their records, detailing how they were acting under protest.

Meanwhile the president has been deliberately lying about his role in obtaining this top level security clearance for his son-in-law Mr. Kushner. He’s misled at least one news reporter about this. Even his beloved daughter Ivanka has lied without flinching once when she was questioned by a reporter about how her husband obtained his top secret clearance level.

She stated for the record that her Dad, the president had nothing to do with her husband Jared Kushner qualifying for his top secret clearance status. It looks like lying is a family trait. Everyone knows how to play their part.

“Mr. Trump’s decision in May (2018) so troubled senior administration officials that at least one, the White House chief of staff at the time, John F. Kelly, wrote a contemporaneous internal memo about how he had been “ordered” to give Mr. Kushner the top-secret clearance.”

“The White House counsel at the time, Donald F. McGahn II, also wrote an internal memo outlining the concerns that had been raised about Mr. Kushner — including by the C.I.A. — and how Mr. McGahn had recommended that he not be given a top-secret clearance.”

“The disclosure of the memos contradicts statements made by the president, who told The New York Times in January (2019) in an Oval Office interview that he had no role in his son-in-law receiving his clearance.”

“Mr. Kushner’s lawyer, Abbe D. Lowell, also said that at the time the clearance was granted last year that his client went through a standard process. Ivanka Trump, the president’s eldest daughter and Mr. Kushner’s wife, said the same thing three weeks ago.”

“Peter Mirijanian, a spokesman for Mr. Lowell, said on Thursday: “In 2018, White House and security clearance officials affirmed that Mr. Kushner’s security clearance was handled in the regular process with no pressure from anyone. That was conveyed to the media at the time, and new stories, if accurate, do not change what was affirmed at the time.”

“The decision last year to grant Mr. Kushner a top-secret clearance upgraded him from earlier temporary and interim status. He never received a higher-level designation that would have given him access to need-to-know intelligence known as sensitive compartmented information.” (But who know’s if President Trump has shared this with Mr. Kushner.)

“It is not known precisely what factors led to the problems with Mr. Kushner’s security clearance. Officials had raised questions about his own and his family’s real estate business’s ties to foreign governments and investors, and about initially unreported contacts he had with foreigners. The issue also generated criticism of Mr. Trump for having two family members serve in official capacities in the West Wing.”

“Mr. Kushner has spent this week abroad working on a Middle East peace plan. Among his meetings was one with Mohammed bin Salman, the crown prince of Saudi Arabia.”

“While the president has the legal authority to grant a clearance, in most cases, the White House’s personnel security office makes a determination about whether to grant one after the F.B.I. has conducted a background check. If there is a dispute in the personnel security office about how to move forward — a rare occurrence — the White House counsel makes the decision. In highly unusual cases, the president weighs in and grants one himself.” 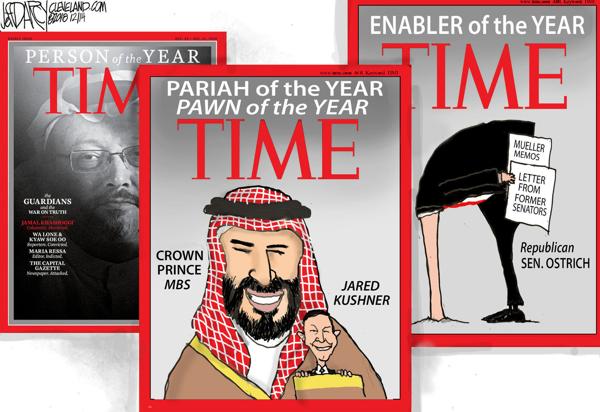 “In May 2018, the White House Counsel’s Office, which at the time was led by Mr. McGahn, recommended to Mr. Trump that Mr. Kushner not be given a clearance at that level. But the next day, Mr. Trump ordered Mr. Kelly to grant it to Mr. Kushner anyway, the people familiar with the events said.”

“The question of Mr. Kushner’s access to intelligence was a flash point almost from the beginning of the administration. The initial background check into Mr. Kushner dragged on for more than a year, creating a distraction for the White House, which struggled to explain why one of the people closest to the president had yet to be given the proper approval to be trusted with the country’s most sensitive information.”