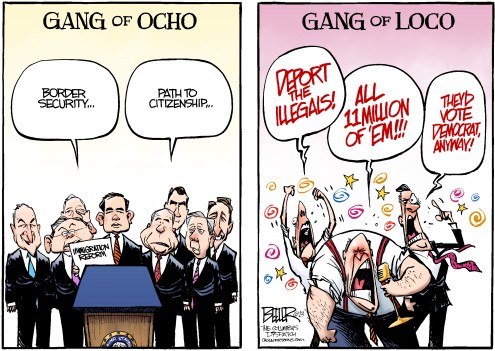 As a Bob Dole, establishment type registered republican, I have been concerned that the tea party faction is doing more harm than good to our American political discourse. At a primary election, this base would not approve of what the past presidents such as President Ronald Reagan, President George H.W. Bush and even the more recent President George W. Bush have believed regarding the creation of immigration reform laws and the theory that families should be left intact, this being part of supporting “family values.”

I am worried that potential 2016 presidential candidates such as the past Florida Governor Jeb Bush and the current Ohio Governor John Kasich, both successful politicians in purple states who have a history of being in favor of immigration reform laws, that they will not prevail during the primary election process because the republican tea party folks are strongly opposed to any immigration changes. Yet both these attractive republican candidates would have an excellent chance to win the role of U.S. President. 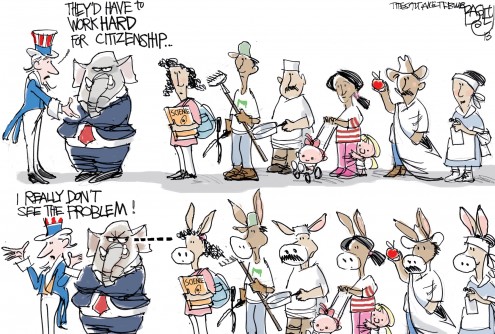 On November, 20, 2014, President Barack Obama issued an executive action based in part towards keeping family units intact. His order  temporarily stops for 3 years the deportation of the illegal alien parents of children who are legally in the United States for over five years which should help up 4 to 5 million individuals. Those protected by this order will be permitted to have a work permit but they will not have a path to citizenship; they will not be able to vote; they will not have access to federal benefits such as Obama care and this order covers only about 4 to 5 million out of 11 million illegal aliens.  The negative, emotional histrionics and over the top reaction by the republican party to this executive action causes me to question why? It does not surprise me that they would have a negative reaction to the President taking this step, but I am puzzled as to reason behind what appears to me, to be an  extreme overreaction. 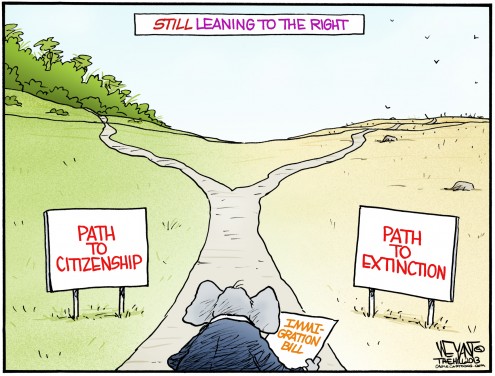 While over 65% of the Americans in both Romney and Obama won states approve the substance of the President’s immigration policies, the majority do not approve of the unilateral process that he has taken. Some in the republican party are promising to respond in kind to what they believe to be the president’s overstepping of his power to act. Proposed plans range from activities such as filing a suit in the courts to challenge his action; republicans  obstructing presidential nominees for various key positions to not enacting legislation with bipartisan support but which could possibly favor our President. The more extreme tea party congressional members are discussing options such as impeachment and/ or a U.S. government shutdown. This past week of November 20, 2014, the one republican who has vocally stated that he is in favor of any immigration reform action is the popular, purple state Ohio Governor, John Kasich. Most of the republicans have followed those reciting the above described talking points in addition to statements such as the President is not a king or an emperor. They refer back to earlier comments in which  President Obama indicated that if he issued  immigration directives that he could be operating out side the prerogative of the U.S congress.

I am most worried that if the U.S. incoming republican congressional representatives decide to act in kind by being obstructionists to sensible, competent, well qualified nominees and legislation instead of implementing an immigration reform law that outdoes the President’s executive order, that they will be terminally handicapping any republican who runs to become a presidential nominee in 2016.  In 2016, it will be mostly democrats in blue states who will be campaigning for legislative jobs and in this environment, there could be a tsunami wave of new congressional democrats countering the 2014 tidal wave of republican wins, if the republican lead U. S. congress cannot show the ability to govern with sound common sense and competency. 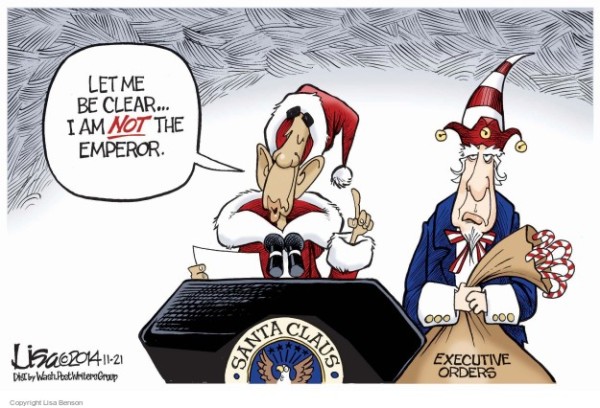 It is my opinion that while the President’s timing of deciding to issue the 11/20/2014 immigration executive order may not have been a politically wise move; but I am also convinced that it is legal and within the power of the president to act as per immigration statutes and ample examples of precedence. In general, no one is denying that executive orders by a president can be legal, critics are crying that the president has overreached the boundaries of his authority in this instance.

The New York Times in the week of 11/20/2014 have published several op-ed pieces about the constitutionality of the immigration executive order and two examples are as follows:

In a New York Times op-ed article by Elizabeth Price Foley from the Florida International University College of Law, writes that “while several presidents — both Republican and Democrat — have used prosecutorial discretion to temporarily delay deportation in the face of wars (Nicaragua, Kuwait), hurricanes or earthquakes (El Salvador, Nicaragua, Honduras) and other  natural and political catastrophes, other presidents have not claimed the constitutional authority to ignore immigration law because they believes it’s unfair as a matter of national policy.” 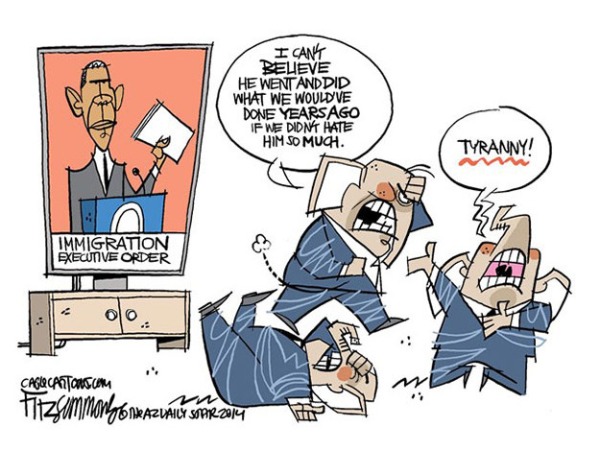 Eric Posner from the University of Chicago Law School argues in a New York Times roundtable that President Obama has the power constitutionally to issue the immigration orders, but there are no  specific rules as to how far the executive branch of our government can act. He states, “if under the Constitution, the president must enforce much of the law but need not enforce all of it, where should the line be drawn? …. we don’t know the answer.”

It is important to note that the republican talking point that other presidents have implemented immigration executive orders solely to correct for loopholes in reaction to recently passed  immigration legislation is not completely accurate. According to a Media Matters blog published on 11/19/2014, the author Meagan Hatcher-Mays writes that “in 1990, (which is four years after the 1986 IRCA immigration law) our past President Bush established a “family fairness” program that deferred deportations for some “family members living with a legalizing immigrant” who were in the country before IRCA (Immigration Reform and Control Act of 1986 ) was passed. According to the AP, up to 1.5 million people were affected by Bush’s executive action, which is about  the same percentage of the undocumented immigrant population expected to be affected by Obama’s order.” However while President Bush did act as described above, a recent  Washington Post Fact check article, posted 11/24/2014, by Glenn Kessler states the following: “In the end, up to 200,000 folks (who benefited by President Bush’s executive action in 1990) amounts to about 6 percent of the illegal immigrant population at the time, not 40 percent. Small wonder the White House prefers the larger number.” This 40% error has been frequently repeated and copied by multiple news media outlets. 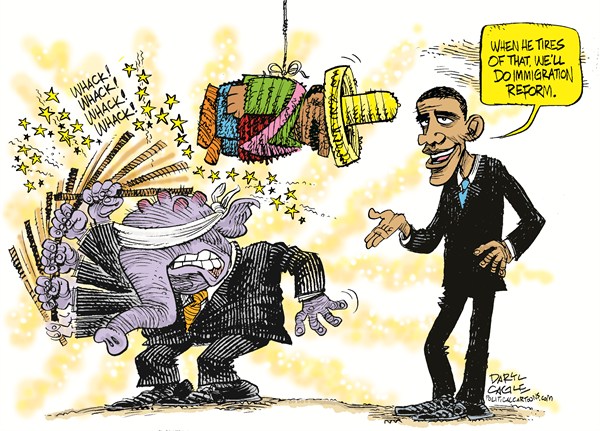 So what is the reason for what seems to be the republicans overreaction to President Obama’s immigration executive orders on 11/20/2014 when they could simply out shine him by passing a constructive and improved immigration reform law in response? Could these dramatic confrontations be politically motivated? What a silly question!!!

Let’s review the 2014 elections by which the republicans were the big victors and by which the democratic base did not show up. This mid term elections had the least amount of American citizens turning out to cast their ballot in over 70 years. There are some who could cynically think the  past republican record for intransigence and the delaying of the U.S. House voting on the June, 2013 Senate bipartisan immigration reform bill, resulted in the democrat voters becoming disheartened and to in effect, not come out to vote. This strategy worked better than the republican lead state congressional representatives creating voter I.D. laws designed to suppress the minority vote. My hypothesis is that there are those republicans who would consider the above described scenario as a winning strategy and would champion its continuation for as long as possible. 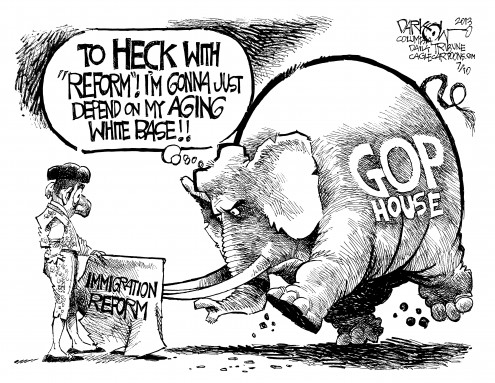 How long was the US republican house planning to wait before passing any immigration reform bill as immigration families kept being deported and separated from loved ones? The US House members were simply caught with their pants down and this is in part the explanation for all the republicans’ hysteria. It is now in their best interests to pass a bill as soon as possible. While the US House can possibly sue to have the courts prevail with a decision to prevent future presidential excesses, it will not effect the current order. Acts to impeach or shut down the government would be political suicide  for the republicans. There is no significant way to defund the current immigration orders. Please, just  pass a bill!!