aside START OF HYPOTHESIS ON 8/9/14 FERGUSON CASE WITH DISCUSSION OF WITNESSES, PART I

I have reviewed enough evidence to start forming an hypothesis of what happened midday in Ferguson, MO. on 8/9/14 when the White, armed, 6’4″ weighing over 200 lbs., Police Officer Darren Wilson fatally shot an unarmed, 6’5″ weighing 289 lbs., Black older teenager, 18 years old. When reviewing the eye witness statements I referred to the FBI interviews whenever possible because they took the time to warn each person being interviewed that it is a crime to lie and that there could be serious consequences for misleading them.

I’m starting my review with facts that were agreed to by the major players in the 8/9/14 Ferguson event including Officer Wilson and Dorian Johnson who accompanied “Big Mike” in his final hours. Here are the facts that are similar in their stories:

2.) Shortly after this initial contact, the police officer quickly backed up his SUV close to where the two young men were sundering along.

3.) After the police officer parked, there ensued a tug of war between Michael Brown who was standing outside the SUV’s driver’s side  with the window down and Officer Wilson who was sitting inside the SUV.

4.) The police officer fired at least one shot from his gun while he was still within his SUV.

5.) Soon after the first shot or shots, Michael Brown took off running east, away from the police.

6.) The police officer was observed pursuing Michael Brown on foot with his gun drawn.

7.) At some point, “Big Mike” stops running to turn around to face the officer as he moves towards him.

The purpose of this basic outline is to help me weed out the eye witnesses who are not credible. For example, Witness 46 described Michael Brown as medium sized and stated that the boys and Officer Wilson were traveling in the same direction. Witness 45 claims to have seen two police officers instead of just Officer Wilson in the Police SUV. Witness 44 admits that she was not wearing her contact lenses the day when she saw Michael Brown stepping backwards before he was fatally shot. Witness 43 is certain that the police officer was using a Taser on Michael Brown which missed while Officer Wilson was inside his SUV. Witness 38 was going to the trash bin when she noticed two boys talking to a police officer followed up the officer reversing back his SUV in front of them but that is all she saw. Witness 37 said the police officer fired about 3 or 4 shots while he was still in his vehicle.  Witness 35 who had hung out with Michael Brown on a daily basis for many years tells how his friend was on his knees with his hands held high when the officer shot him in the head. Witness 30, an admitted felon told police on 8/13/14 that he saw Michael Brown pointing a gun in his direction. Witness 26 in her 8/11 police interview corrected the detective who referred to the police vehicle as a SUV by insisting that the police vehicle at the crime scene was a regular police car. 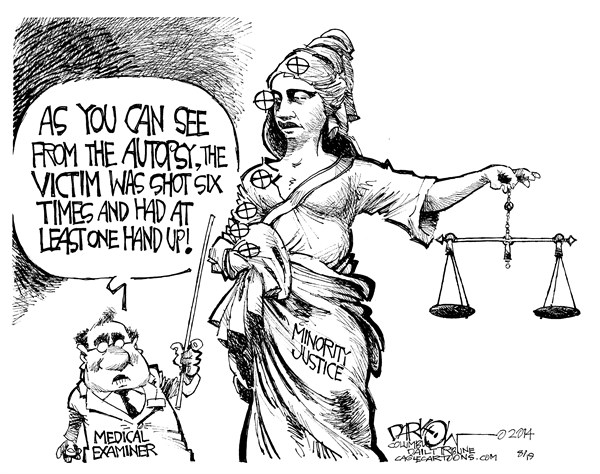 Witness 33 confused the FBI on 8/21 with all his ramblings. He was a construction worker who talked to Michael Brown for about 30 minutes on 8/9. The agents kept haranguing him with questions about wax. Then they asked if he had been conducting any drug transactions. They got nowhere with this line of questioning as it would have been  impossible for anyone to follow his commentaries. He is definitely not fit to be a witness for anyone. Other witnesses such as Witness 40 and 41 were not even in the area. This allows me to focus on studying the remaining witness statements which are at a minimum, at least consistent with the facts in the outline.

Then there are eye witnesses like Witness 54 who saw only part of the 8/9/14 Ferguson events. She was able to view the two young men walking in the middle of the Canfield Road as the police officer heading in the opposite direction stopped to converse with them. She did see the officer reverse his vehicle and subsequently, she could tell there was a commotion in progress. Her view was impeded because from her vantage position, she could see the SUV’s passenger side and not the driver’s side. Michael Brown’s feet were on the ground and the police officer was inside his vehicle. She heard one shot. Then after a few seconds, Michael Brown started running and as the police officer followed him, he shot one or two times in the direction of Michael Brown. She  repeated that she did not see anything after this point because a building blocked her ability to see. Witness 22 heard the beginning shots and by the time she and her boyfriend saw anything, Michael Brown was facing the officer with his hands partially raised. Witness 32 during the 9/25 FBI interview testifies that she was driving behind the police car and did witness the original altercation but she ducked down after the first shot and as she saw the officer run past her car. She described how she had her head in her passenger’s lap as she blacked out for a short time. She tells how Dorian Johnson came near the car and both she and the passenger, yelled for him to stay down. She was not able to recall much as she blacked out for a period of time. Witness 47 concurs that she saw Michael Brown clutching his torso as he moves to keep from falling down towards the police officer as he was shot multiple times. She is the one who thought that when Officer Wilson reversed his SUV, it ran over Michael Brown’s foot. After she witnessed a scuffle between the two, she ran inside her apartment to grab her phone which means she did not see everything. Also, she told the detective that the boys and Officer Wilson were traveling in the same direction when the boys were walking east and the officer was driving west. 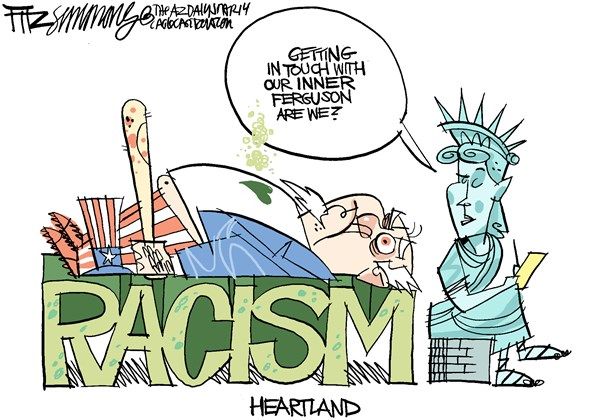 In my opinion, the way witnesses were questioned also caused confusion. For example, a young male, Witness 64 became confused while being queried by an FBI agent on November 11, 2014. This witness who was in a car with his parents and his sister said that while he was playing with his game, “candy crusher,” he heard two shots. Everyone in the car was trying to figure out what caused the noise, when Witness 64 stated that he saw Michael Brown running with a police officer following him while shooting at him in the back. At some point the agent mentions the forensic evidence of no gun shot wounds to Michael Brown’s back side while omitting the bullet entry wound to the dorsal (back) of the right fore arm listed on the same forensic report. The young man became confused but continued with what he thought he saw. He saw Michael Brown jerk before he turned around with his arms raised at shoulder level but then his hand went down as the other arm was clutching at his chest. And as Michael Brown quickly stumbled toward Officer Wilson to where there was a distance of about 8 feet between them, he was fatally shot  from multiple gun firings. The young male Witness 64 openly said  that he was not certain about some things such as the description of the police car and its parked position because he didn’t really focus on the officer’s vehicle. Then his parents said they thought Michael Brown was running towards the officer but this Witness 64 believes he was stumbling.

This is an important point because the above example shows how well intentioned eye witnesses could observe the same scenario and sincerely see things differently. This is also when probative questions are crucial. Without clarification as to Michaels Brown’s movement towards the police officer, decent folks could use the terminology, running or charging interchangeably with stumbling or staggering in order for someone not to fall.

Grand Jury Evidence – St. Louis Public Radioapps.stlpublicradio.org/ferguson-project/evidence. html All Ferguson Coverage … If you have questions about this evidence or have found anything interesting …. Reports, Forensic Evidence and other Interviews.