image THINKING OF A RINO, PART IV/ DISCUSSION OF GERRYMANDERING

As a RINO, a republican in name only, I have been decrying many of the republican tea Party segment stances on issues like “no new taxes, no matter what;” “cutting taxes and government spending is necessary to reduce the deficit;” “cutting taxes always produces economic growth;”  “increasing taxes on millionaires and the minimum pay wage scale will cost US jobs.” I have been arguing that these intransigent dogmas have cost Americans by allowing the tea party right to stop even essential and smart investments as in the updating of our crumbling infrastructure, when the American Society of Civil Engineers has been giving the US infrastructure , a GPA of D+.  Not investing in our infrastructure for the past few years while the interest rates have been so low; when Americans including our Veterans have been desperate for good paying jobs and when most financial experts assert that the return on this investment would pay huge future dividends, borders on criminal neglect by our legislators.

Also, I have contended that the Target billionaire heir and Minnesota Governor Mark Dayton proves that it is possible to substantially increase jobs, pay scales, business growth which is the envy of surrounding republican states by increasing the taxes of those earning more than $150,000 and couples earning more than $250,000. He  inherited a 2013 deficit of $627 million from his republican predecessor, Governor Pawlenty but in 2015, he has a budget with over a one billion dollar surplus.

A 2/18/15 Mother jones article by Patrick Caldwell describes Governor Mark Dayton as a terrible retail politician. “He’s very shy and he’s an introvert,” Ken Martin, the chair of the state party and a friend of Dayton’s, told me unprompted earlier this month. “He’s not a typical, backslapping politician,” Martin continued. “He’s not very articulate; he’s kind of jerky,” Tom Bakk, the Democratic Senate majority leader, says of his ally’s style.  Here are some excerpts from this article:

“Over the past several years, Minnesota has become a testing ground for a litany of policies Democrats hope to enact nationally: legalizing same-sex marriage, making it easier to vote, boosting primary education spending, instituting all-day kindergarten, expanding unionization, freezing college tuition, increasing the minimum wage, and passing new laws requiring equal pay for women. To pay for it all, Dayton pushed a sharp increase on taxes for the top 2 percent—one of the largest hikes in state history. Republicans went berserk, warning that businesses would flee the state and take jobs with them.”

“The disaster Dayton’s GOP rivals predicted never happened. Two years after the tax hike, Minnesota’s economy is booming. The state added 172,000 jobs during Dayton’s first four years in office. Its 3.6 percent unemployment rate is among the lowest in the country (Wisconsin’s is 5.2 percent), and the Twin Cities have the lowest unemployment rate of any major metropolitan area. Under Dayton, Minnesota has consistently been in the top tier of states for GDP growth. Median incomes are $8,000 higher than the national average. In 2014, Minnesota led the nation in economic confidence, according to Gallup.”

“Minnesota has even pulled ahead of Walker’s Wisconsin, leapfrogging its neighbor to the east on measure after measure.”

I will now focus on the subject of gerrymandering. I picked  this subject because I believe this is the reason that tea party representatives can count on being in safe districts, so that they can cater to their base at the expense of the rest of this country.

As per the 3/1/15 Washington Post article, “This is the best explanation of gerrymandering you will ever see,” the author Christopher Ingraham explains the concept of gerrymandering with the following excerpts:

“Gerrymandering — drawing political boundaries to give your party a numeric advantage over an opposing party — is a difficult process to explain. If you find the notion confusing, check out the chart above.”

“Suppose we have a very tiny state of fifty people. Thirty of them belong to the Blue Party, and 20 belong to the Red Party. And just our luck, they all live in a nice even grid with the Blues on one side of the state and the Reds on the other.”

“Now, let’s say we need to divide this state into five districts. Each district will send one representative to the House to represent the people. Ideally, we want the representation to be proportional: if 60 percent of our residents are Blue and 40 percent are Red, those five seats should be divvied up the same way.”

“Fortunately, because our citizens live in a neatly ordered grid, it’s easy to draw five lengthy districts  — two for the Reds , and three for the Blues. Voila! Perfectly proportional representation, just as the Founders intended. That’s grid 1 above, “perfect representation.”

“Now, let’s say instead that the Blue Party controls the state government, and they get to decide how the lines are drawn. Rather than draw districts vertically they draw them horizontally, so that in each district there are six Blues and four Reds. You can see that in grid 2 above, “compact but unfair.”

“With a comfortable Blue majority in this state, each district elects a blue candidate to the House. The Blues win 5 seats and the Reds don’t get a single one. Oh well! All’s fair in love and politics.”

“In the real world, the results of this latter scenario are similar to what we see in New York, though there are no good examples of where a majority party gives itself a clean-sweep. In 2012, Democrats received 66 percent of the popular House vote. But they won 21 out of 27 House seats, or three more than you’d expect from the popular vote alone. And from a purely geometric standpoint, New York’s congressional districts aren’t terribly irregular — at least not compared to other states.”

“Finally, what if the Red Party controls the state government? The Reds know they’re at a numeric disadvantage. But with some creative boundary drawing —  the type you see in grid 3, “neither compact nor fair” — they can slice the Blue population up such that they only get a majority in two districts. So despite making up 40 percent of the population, the Reds win 60 percent of the seats. Not bad!

“In the real world, this is similar to what we see in Pennsylvania. In 2012, Democrats won 51 percent of the popular House vote. But they only won 5 out of 18 House seats –fewer than one third. This was because when Pennsylvania Republicans redrew the state’s Congressional districts, they made it one of the most geographically irregular districts in the nation.”

“Now, this exercise is of course a huge simplification. In the real world people don’t live in neatly-ordered grids sorted by political party. But for real-world politicians looking to give themselves an advantage at redistricting time, the process is exactly the same, as are the results for the parties that gerrymander successfully.”

“The easiest way to solve this issue, of course, would be to take the redistricting process out of human hands entirely. There is already software capable of doing just that — good luck getting any politicians to agree to it, though.”

Christopher Ingraham has written a previous 5/15/14 Washington Post article, ” America’s most gerrymandered congressional districts”  and the following are some excerpts:

“Contrary to one popular misconception about the practice, the point of gerrymandering isn’t to draw yourself a collection of overwhelmingly safe seats. Rather, it’s to give your opponents a small number of safe seats, while drawing yourself a larger number of seats that are not quite as safe, but that you can expect to win comfortably.”

1. Democrats won in nine of the 10 most-gerrymandered districts. But eight out of 10 of those districts were drawn by Republicans.

“This speaks to the notion that the point of gerrymandering isn’t to draw yourself a safe seat but to put your opponents in safe seats by cramming all of their supporters into a small number of districts. This lets you spread your own supporters over a larger number of districts. And the way to do this is to draw outlandishly-shaped districts that bring far-flung geographic areas together. North Carolina’s 12th district, which holds the title of the nation’s most-gerrymandered, is a textbook example of this: It snakes from north of Greensboro, to Winston-Salem, and then all the way down to Charlotte, spanning most of the state in the process.” 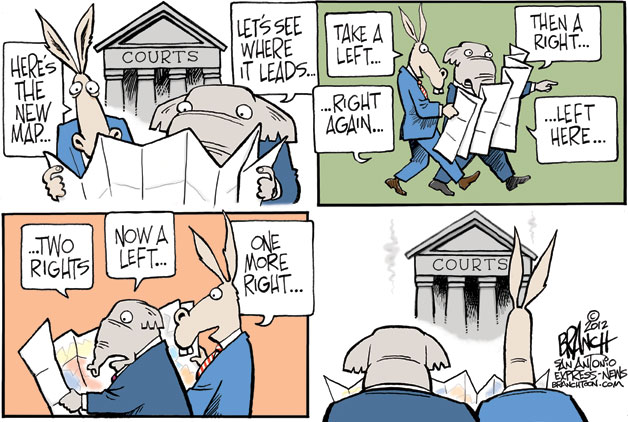 2. Three of the 10 most-gerrymandered districts are in North Carolina.

“North Carolina Republicans really outdid themselves in 2012. In addition to the 12th district, there’s the 4th, which covers Raleigh and Burlington and snakes a narrow tentacle all the way south to pick up parts of Fayetteville. And then there’s the 1st District, which covers a sprawling arbitrarily shaped region in the northeastern part of the state. All three of these seats were won by Democrats in 2012.”

“Overall, the North Carolina GOP’s efforts paid off handsomely. Based on their statewide vote share you’d expect North Carolina Democrats to hold about seven seats. But they won only four. This is because an outsized share of the state’s Democratic voters were shunted off into the three highly-gerrymandered districts above.”

3. Indiana and Nevada stand out as states with the least amount of gerrymandering.

“In contrast to North Carolina’s Republicans, Indiana’s did a remarkably good job of drawing sensible district boundaries. The same holds true for Nevada’s Democrats, although with only four districts, the district boundaries in Nevada are dictated to a large degree by the state’s borders.”

4. Maryland and North Carolina are essentially tied for the honor of most-gerrymandered state.

“With average gerrymander scores of about 88 out of a possible 100, Maryland and North Carolina are home to some of the ugliest districts in the nation among states with at least three Congressional districts. In fact, North Carolina is home to three out of the top 10 most-gerrymandered districts in the country. Maryland is proof that gerrymandering isn’t just a Republican pastime, as the state’s Democrats redrew those boundaries in 2012. The standout in that state is the 3rd Congressional district, which is the nation’s second-most gerrymandered and home to Democratic congressman John Sarbanes.”

5. Republicans drew Congressional boundaries in six of the 10 most-gerrymandered states.

“Again, the payoff for Republicans is in the makeup of the state’s delegations: In those six states, Republicans picked up about 11 more seats than you’d expect from simply looking at the parties’ vote shares.”

6. Gerrymandering is easier to get away with in more densely-populated areas.

“You’ll notice that many of the highly irregular districts are clustered around cities and metro areas. When there are more people in a given area, partisans have more leeway in how to draw their districts.”