aside ISRAEL- PALESTINE CONFLICT FROM OCTOBER 2011-2012

The following information for this blog is compiled from a PBS documentary:

“Palestine became the 195th full member of Unesco on 10/31/11, as the United Nations organization defied a mandated cutoff of American funds under federal legislation from the 1990s. The vote of Unesco’s full membership was 107 to 14, with 52 abstentions.

The step will cost the United Nations Educational, Scientific and Cultural Organization one-quarter of its yearly budget — the 22 percent contributed by the United States (about $70 million) plus another 3 percent contributed by Israel. Victoria Nuland, a State Department spokeswoman, said that American contributions to Unesco, including $60 million scheduled for this month, would not be paid.

Cheers filled the hall at Unesco’s headquarters here after the vote, with one delegate shouting, ‘Long live Palestine!’ in French. The Palestinian foreign minister, Riad al-Malki, praised the organization, saying that ‘this vote will help erase a tiny part of the injustice done to the Palestinian people’ and that it would help protect world heritage sites in Israeli-occupied territory. In a long speech, Mr. Malki said that ‘this membership will be the best step toward peace and stability,’ insisting that the Palestinian request for membership in Unesco was ‘linked in no way to our request to join the United Nations.”

“The Palestinian bid for statehood at the United Nations was effectively stalled Friday after the Security Council approved a report stating its inability ‘to make a unanimous recommendation.’

‘We knew from the beginning … that we might not be able to succeed in the Security Council because there is a powerful country that has the veto power,’ said Riyad Mansour, the Palestinian envoy to the United Nations. He said that he believed the report was ‘objective.’ The United States has been vocal about its intention to veto any Palestinian bid for statehood. Last week, France and the United Kingdom said they would abstain from the vote. Those three nations, along with China and Russia, have veto power in the Security Council…

Were a council resolution to pass, the membership bid would be forwarded to the General Assembly, where passage is all but assured. A vote in the near term does not seem likely. But should it take place, diplomats say that the Palestinians are unlikely to get even the nine votes necessary for a resolution to pass, because of a large number of abstentions. The U.S. veto would effectively be moot…

The next step for the Palestinians remains unclear. They could sidestep the Security Council and go straight to the General Assembly, where they would get an upgraded observer status, matching that of the Vatican, but not full membership. Palestinian Authority President Mahmoud Abbas, however, has said that they will not pursue that option.”

“The Palestinian Authority president has said the exploratory talks with Israel on resuming full peace negotiations have concluded, without any progress…

Palestinian and Israeli negotiators met five times in recent weeks in the Jordanian capital for what were termed ‘exploratory talks.’… The Quartet of Middle East peace mediators – the US, UN, EU and Russia – said last autumn that they expected both sides to submit detailed proposals on borders and security arrangements, in the hope that the dialogue would encourage the resumption of direct peace talks…

Palestinian negotiators insist that building settlements on occupied land must stop before they agree to reopen talks. Israel says there can be no preconditions to talks and it continues to build in the settlements.”

“Israeli Prime Minister Benjamin Netanyahu and the centrist opposition party Kadima formed a surprise unity government Tuesday, extinguishing plans for early elections and cementing Netanyahu’s position as the strongest Israeli leader in years. The deal gives the governing coalition a vast parliamentary majority, fortifying Netanyahu’s mandate as he presses for possible military action against Iran’s nuclear sites, an idea that has faced growing domestic criticism. It could also shift the hawkish coalition toward the center, granting Netanyahu room to weather threats of revolt by right-wing factions and perhaps leeway to offer concessions to the Palestinian…
The unity deal also included a pledge to ‘renew the political process with the Palestinian Authority.’… New Vice Prime Minister Shaul Mofaz said Tuesday that he had drawn up an interim peace agreement based on borders and security. But he said he would need to discuss it further with Netanyahu, who reiterated his long-held stance that Israel is open to discussions without preconditions, such as a freeze on settlements.”
Nov. 12, 2012 Palestinian Authority to Seek Non-Member State Status at United Nations
On Nov. 12, 2012, “the Palestinians distributed a draft resolution to 193 (United Nations) member states in the first practical step of the campaign for international recognition of a future state in the West Bank, Gaza and East Jerusalem. They also seek to upgrade their status to that of a nonmember observer state in the United Nations system…
Israel’s Foreign Ministry has warned foreign governments that a successful Palestinian bid for enhanced status at the United Nations this month could lead Israel to cancel the Oslo peace accords and, possibly, to oust President Mahmoud Abbas and dismantle his Palestinian Authority, according to official documents made available to reporters on Wednesday.
The threats reflect the last-minute brinkmanship under way as the Palestinians forge ahead with plans for a vote on Nov. 29 in the United Nations General Assembly, having rejected a personal plea to hold off from President Obama as they and the Israelis focus their final lobbying efforts on a divided Europe.”
NOVEMBER 12, 2012 Israel Launches Operation Pillar of Defense Against Hamas Militants in the Gaza Strip
“Israel launched its military offensive against Gaza on 14 November, marking the latest eruption in a conflict with Palestinian militants which has raged between the two sides for years. The latest violence has left dozens of people dead, many of them civilians, and shows no sign of ending soon. 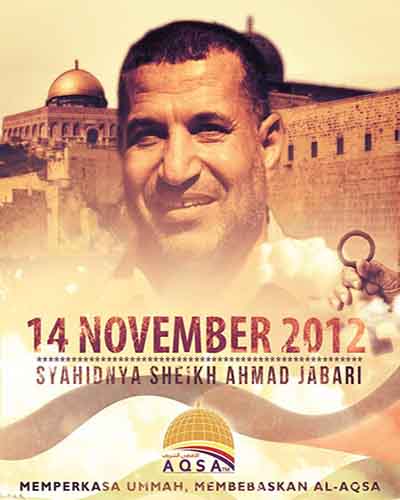 Israel’s offensive on Gaza began with an air strike that killed the commander of Hamas’s military wing, Ahmed Jabari, whom it accused of responsibility for ‘all terrorist activities against Israel from Gaza’ over the past decade. The Israel Defense Forces (IDF) subsequently announced the start of Operation Pillar of Defense, which it said was intended to protect Israeli civilians from rockets and mortars fired by militants in Gaza, as well as cripple Hamas’s capability to launch attacks. Israeli Prime Minister Benjamin Netanyahu said the operation was launched because he could no longer ‘accept a situation in which Israeli citizens are threatened by the terror of rockets…’ Although Jabari’s killing signaled the start of Israel’s offensive, it was preceded by spates of deadly cross-border violence which saw Palestinian militant groups, including Hamas’s Qassam Brigades, firing hundreds of rockets into southern Israel and the Israeli military shelling Gaza and carrying out air strikes… Mr. Netanyahu has insisted that he is not seeking to topple Hamas.
On November 18, the prime minister announced that the IDF had attacked more than 1,350 ‘terrorist targets’ and had achieved ‘significant hits on weapons aimed at Israeli citizens, as well as on those who use the weapons and those who dispatch them.’ Israel has said it is doing its utmost to avoid civilian casualties, although more than half of those killed in Gaza have been women and children, according to Hamas officials. The Israeli government has approved the calling up of 75,000 army reservists in apparent preparation for a ground offensive. Some 31,000 have already been summoned…
Since the conflict began, 1128 rockets have been fired towards Israel, the IDF says, with 324 intercepted by the Iron Dome missile defense system. Before the recent offensive, Israel had repeatedly carried out air strikes on Gaza as Palestinian militants fired rockets across the border. But the aerial and naval bombardment is its most intense assault on the territory since Israel launched a full-scale invasion four years ago. Hamas seized control of Gaza in 2007, a year after winning a decisive victory in general elections. Israel withdrew from the strip in 2005 but maintains a blockade around it. Israel, as well as the United States and the European Union, regards Hamas as a terrorist organization.”