Al Jazeera put the question about how to solve a problem like Syria, to four Middle East experts with varying world viewpoints. This news outlet published their perspectives on 10/1/15.

The first interview was with  Randa Selim, Director of the Initiative for Track II Dialogues at the DC-based Middle East Institute and non-resident fellow at the Johns Hopkins University SAIS Foreign Policy Institute. The following are excerpts from her posting:

“Talking with Assad will neither defeat ISIL nor achieve a political solution. Instead, the US, Europe, and their regional allies should talk to his Russian and Iranian sponsors, while increasing military pressure on the ground to deny them and Assad a military victory in Syria.”

“The West looks at the Syrian conflict through three lenses: First, the security threat posed by the Islamic State of Iraq and the Levant (ISIL); second, the influx of hundreds of thousands of Syrian refugees into Europe; and third, The high rate of casualties in Syria from the Assad regime’s bombing of civilian areas under rebel control, pushing many to migrate to neighbouring Turkey and Lebanon.”

“Talking with Bashar al-Assad will not help solve any of these problems, and keeping Assad in power will exacerbate them.”

“Evidence abounds that, at the beginning of this crisis, Assad facilitated and manipulated ISIL as one of the tools in his political survival toolbox.”

“He will not fight ISIL as long as he believes his reign is under threat. Refugees are heading towards Europe because they do not see any hope for a political solution in Syria and know that Assad is not going to voluntarily give up power.”

“The US and Russian approaches to dealing with the Syrian conflict are a study in contrasts.”

“Time and again, the US president has been reluctant to engage in any military efforts to lay the groundwork for the political solution he constantly trumpets.”

“The United States’ failed “train and equip” program has become the butt of jokes in the Middle East. The White House’s reluctance to act decisively in Syria is motivated by a number of factors: Its abhorrence of military interventionism, its misguided assumption that military action in Syria would have jeopardised nuclear negotiations with Iran, and its further misguided assumption that Assad’s downfall will inevitably lead to ISIL taking Damascus.”

“Putin’s approach is to do all he can to protect the Assad regime. Russia has vetoed United Nations Security Council resolutions targeting the Syrian government.”

“Now, with the regime in a weak position, Putin has come to Assad’s rescue once again by deploying Russian troops, planes, and anti-aircraft missile systems.” 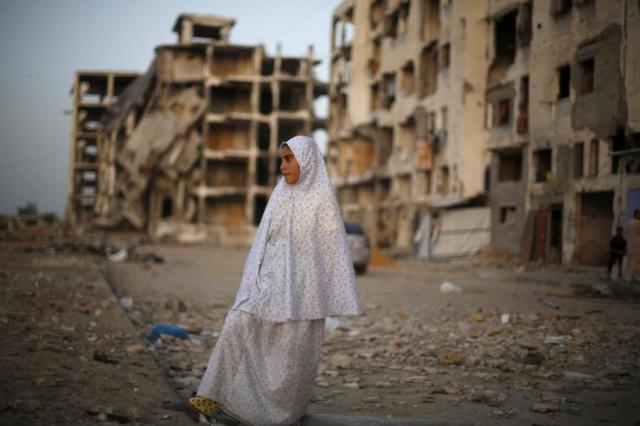 “Putin has invested in Assad’s survival, and it is naive to assume that he will be willing to abandon him unless the cost of propping him up dramatically increases.”

“It is equally unlikely that Russia, Iran and the Assad regime will devote resources to defeating ISIL. With Russian and Iranian help, the regime will focus on holding the areas of Syria still under Assad’s control.”

“It will selectively seek to fight ISIL to shore up the Russian narrative that Assad is the West’s best ally against ISIL.”.

“It is up to the pro-opposition camp – led by Turkey and Jordan, financed by Saudi Arabia, Qatar and the United Arab Emirates, and assisted by the US and European countries – to defeat ISIL, while strengthening the armed-Syrian opposition. Training and equipping of new Syrian rebels has not worked, and will not work.”

“We must work with the 100,000 Syrian rebels who are fighting both ISIL and the regime. Neighbouring countries like Turkey and Jordan must eventually send ground troops to assist the rebels.”

“In the interim, there is a need for a regional dialogue platform under the UN umbrella to discuss the principles underpinning a solution for Syria, the architecture of the transitional period and the guarantees that must be provided by the regionals to secure a buy-in from all components of the Syrian society.”

“Talking with Assad will neither defeat ISIL nor achieve a political solution. Instead, the US, Europe, and their regional allies should talk to his Russian and Iranian sponsors while increasing military pressure on the ground to deny them and Assad a military victory in Syria.”

Another expert on the Middle East is Alexander Nekrassov, a popular Russian author and former Kremlin adviser. The following are some excerpts from his report:

“Assad’s fate will continue to be a thorny issue, as well, when it comes to the possible timetable and conditions of his departure.”

“Did the meeting between Russian President Vladimir Putin and US President Barack Obama on the fringes of the United Nations 70th General Assembly on Monday help bring us any closer to a resolution of the war in Syria?”

“The two sides are still bitterly divided on the issue. Yet, word is that out of the 90-minutes of the meeting, the two leaders spent half of that time discussing Syria.”

“It’s an unpleasant truth, especially for the likes of the US and Britain, but Putin feels that an opportunity has emerged on this front, and he is pressing hard to promote his view that the Syrian government is the only legitimate force against ISIL and should be supported in its battle.”

“Meanwhile, Russia is adding more diplomatic pressure on the US by building a new coalition of nations that includes Russia, Saudi Arabia, Turkey, Egypt, and Iran.”

This initiative overshadows the limited build-up of Russian forces in western Syria. If the US does not join this alliance soon, so the thinking in Moscow goes, it will probably be forced to do it at some point later on.

“At the moment, the US-led coalition has not really offered much in the way of an efficient working concept.”

“So what are the prospects for the war in Syria? In the short term, they are not encouraging as the posturing and face-saving exercises are bound to slow down the process of reaching any solution.”

“Assad’s fate will continue to be a thorny issue, as well, when it comes to the possible timetable and conditions of his departure.”

“The latest Russian military initiative should have a very significant psychological effect. It would tell rebels that victory is not imminent, opposite to what has been the thinking since the very beginning.”

“The latest Russian military initiative is nothing short of a major reshuffle of the entire card deck in the game for Syria.”

“Suddenly, while the West was painstakingly building up a certain momentum to lock down on all future possibilities, the other camp pulled the mother of all tricks: Intervening seriously and according to international law, which the West has simply failed to do.”

“The United States and its Western allies seem to be trying to salvage whatever they can of their rapidly diminishing influence, but it is expected that they’ll come to their senses soon.”
“On the other hand, for the majority of Syrians, their position vis-a-vis their government has remained the same since the start of the conflict.”
“Supporting the government in order to fend off perceived dangers has been their best option – and has increasingly become their only one.”
“In a tell-tale sign, two out of three refugees, who fled the fighting areas in Syria, headed for the government-controlled areas, while the other third went to neighboring countries. ”
“Moreover, these Syrians would not easily accept getting rid of Assad for a very simple reason: If this “revolution” managed to achieve anything, then all they’d be doing is to sow the seeds for future generations to relive the same horror whenever this or that regional player saw fit.”
The latest Russian military initiative should have a very significant psychological effect. It would tell rebels that victory is not imminent, opposite to what has been the thinking since the very beginning.
This would turn the dynamics of Syrian fighters among the so-called Islamic factions, as they would be forced to rethink the futility of a prolonged fight.
Radical fighters from other countries would, of course, still fight both for ideological reasons and because they have nowhere else to go to, but it won’t be the same.
In fact, for the first time since the crisis started, military operations and arming of factions won’t be justified by the need to “push Assad to the negotiating table”.
Now, the military advantage that the Syrian government would enjoy (out of Russian intervention) should soon push the ever unrealistic opposition figures to that very table, as a political solution suddenly becomes within sight.
Samer Abboud, associate professor of International Studies, Arcadia University lists the following notes:
“Debates over whether or not Assad should be part of a transition process miss the point – the conflict is well beyond being solved by his removal.”

“Speeches at the United Nations by Presidents Barack Obama and Vladimir Putin in late September 2015 put forth radically different and conflicting visions for how to solve the Syrian conflict.”

“Meetings between the two leaders afterwards only further highlighted the gaps between US and the Russian thinking on the Syrian conflict, particularly with regards to the future of President Bashar al-Assad and his role in a political transition process.”

“As the international community debates these competing Russian and US visions for Syria, a third vision is unfolding on the ground that may yet prove to have the most traction and could serve as the basis for a future settlement.”

“In recent weeks, Iranian and Turkish officials brokered a comprehensive agreement between regime and rebel forces in the northwest of the country that, among other things, provided a no-fly zone, a six-month cessation of hostilities in specific areas, rebel withdrawal from Zabadani along the Lebanese border, and civilian evacuation from two villages under rebel siege.”

“This agreement comes amid wider efforts by UN envoy Steffan de Mistura to negotiate local freezes throughout other parts of the country to facilitate aid provision and provide civilians relief from lengthy sieges.’

“And while the local freezes and the Iranian-Turkish agreement have proven extremely difficult to negotiate and easy to break, at the very least, they represent an attempt at addressing the Syrian conflict based on realities on the ground.”

‘And herein lies the fundamental problem with the Russian and US visions for Syria: mainly, that the competing policy visions, which we are led to believe are Syria’s only two options moving forward, are completely divorced from the realities inside of Syria.”

“Debates over whether or not Assad should be part of a transition process miss the point – the conflict is well beyond being solved by his removal. As such, any solution that does not accurately embody and reflect the realities “of life inside of Syria today and the ecologies of violence that have taken root cannot be taken seriously moving forward. Unfortunately, no such solution is on offer.”

“What is needed moving forward are measures – not grand plans – that seek strategic, targeted relief for civilian populations, while reducing armed hostilities and violence in the country.”

“Whether or not this can eventually lead to a solution to the conflict is unclear, and perhaps even naive, but at the very least, such measures can change the dynamics on the ground such that serious negotiations could be initiated.”

“What we call the “Syrian conflict” is today really the conglomeration of micro-conflicts for which solutions cannot be found in the halls of the General Assembly.”

“What is needed today are serious attempts inside of Syria to build the basis for a mediated, negotiated solution that addresses the main drivers and outcomes of the conflict.”

“This means thinking differently both about how we see the conflict and its solution.”

“It also means thinking beyond the US’ and Russia’s plans for Syria.”.