aside The American Peoples Are The Adults, Part XI (Student loans)

The following story, is just one more illustration as to how gridlock in the U.S. Congress has ended up imposing a tax increase on the American middle class without any protestations from the likes of the notorious Grover Norquist, who is the bearer of the mantra reflected in the #1 republican talking point, no new taxes.

This is also an example of how it is not just the republicans who are being obstructionists in order to play politics at the expense of their tax paying constituents. In this case, it was democrats who in 2013, who foiled a bill created to keep student college loan interest at lower rates.

This explains why the Americans are saying, “a pox on both your houses,” as they are turning their backs on what they perceive to be the  political establishment elites who have been orchestrating an illusion that they actually care about their constituents. The middle class folks are tired of feeling played, and so, they are expressing their antipathy with the clueless bunch in congress by voting for party establishment outsiders in the 2016 presidential election season.

In mid 2013, a group of U.S. Senators sponsored a bipartisan bill devised as a last minute stop gap measure, designed to keep the federal student loans’ interest rates at around 3.4%. Because the Senators could not come together to  enact this measure, college students saw a tax increase in the form of their college loan interest rates being doubled.

This is the rest of the story as narrated by Miles Graham in his 7/10/13 Time Magazine article, “As Democrats Bicker, Senate Stalls Again On Solving Student Loan Impasse:”

“Senators voted to end discussion of a bill that would return federal student loans interest rates from the current 6.8% to the pre-July 1st rate of 3.4% for another year. The Democratic coalition of senators that supported the bill, led by Rhode Island Sen. Jack Reed and Iowa Sen. Tom Harkin, had hoped the one year solution would give legislators time to work out a permanent fix for the issue. “Today we fail,” announced Sen. Tom Udall, a New Mexico Democrat.”

“The vote was just the latest turn in a multi-year fight over student loans that has gripped Congress. Next to no progress has been made since the House voted its own bill through on May 23. The House bill links the rates to the 10-year Treasury note, and allows the rates to vary over the life of the loan. The White House has threatened to veto the House bill, however, citing as problems the absence of a fixed rate, the burden placed on low- and middle-income students, and the use of student loan revenue to reduce the deficit.”

“The gridlock paralyzing the Democrat-controlled Senate springs from arguments between two factions, one bipartisan and one Democratic. The Democratic proposal centered on a policy of “no harm,” as Michigan Democrat Debbie Stabenow put it. She suggested that another stop-gap measure would protect students in the short term while enabling the Senate to “work together on something comprehensive that does not, down the road, see students paying 7%, 8%, 9%, or in the House, on one of their rates, they top out at 10.5%. I reject that.”

“The bipartisan proposal, shepherded by Senators Joe Manchin (D-W. Va.), Angus King (I-Maine), Richard Burr (R-N. C.), Lamar Alexander (R-Tenn.), Tom Carper (D-Del.), and Tom Coburn (R-Okla.), ties rates to the 10-year Treasury note, adding a fixed 1.85% to the note rate at the time of origination. The Democrat camp criticized the lack of a hard cap on the rates under this plan, claiming that in the long term students would pay more. Sen. Reed cited Congressional Budget Office predictions that students will pay $37.8 billion more in interest between 2017 and 2023 under the bipartisan plan.” 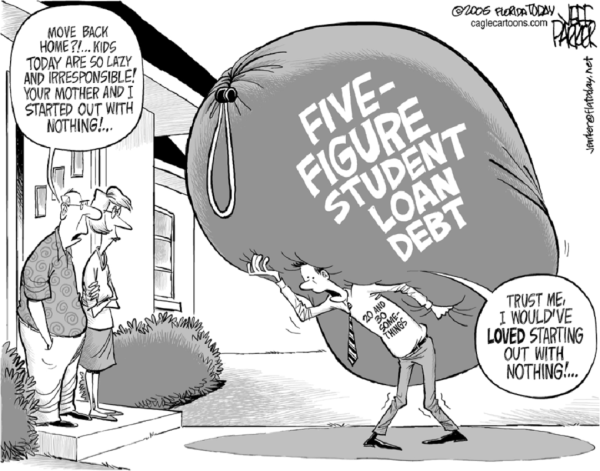 “The awkward situation has Democrats fighting each other as nothing gets done. As he promoted the bipartisan proposal, Manchin addressed his Democratic colleagues, slightly incredulous of his situation. “Ours saves $9 billion and my dear friends in my caucus only save $2 billion,” he said. Harkin repeatedly referred to the bipartisan bill as “Republican.” Earlier, Senator Manchin had said, “When they say ‘it’s the Republican bill’ that’s so erroneous, and it’s just not fair. This is truly a bipartisan effort.”

“Andrew Gillen, research director at the independent think tank Education Sector, is surprised that the Senate hasn’t already reached a compromise. “This was a rare instance where you actually had largely bipartisan agreement on how the general solution should look like.” He rejected the return to 3.4% rate, as it’s an “arbitrary” number without “any thought” put into it.” 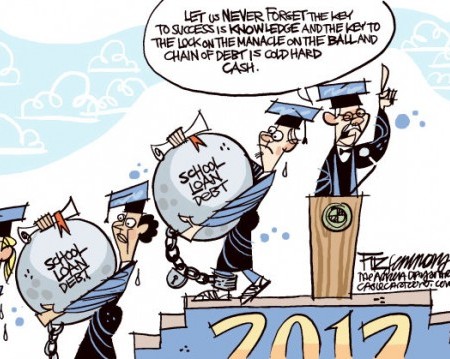 “Student loans account for roughly $1 trillion in debt in the United States, more than credit cards. If a deal is struck, any future reduction in rates will likely be retroactive. And if a deal is agreed to before repayment begins on loans taken out at the current rate, students with new loans are unlikely to feel the impact. But the clock is ticking.”

“For now, Senator Manchin summed up the Senate predicament well: “Like everything else that’s happened here the last two or three years, nothing gets done.”

In 2015, Senator Elizabeth Warren submitted a budget amendment which would have  allowed college students to refinance their loans down to a 3.9% interest rate. Her proposal would have been paid for by a Buffett Rule tax on millionaires.

Prior to the vote on her amendment which did not pass by a vote of 46- 53, she issued the following commentary:

“Last year, Republicans blocked our efforts to lower student loan interest rates … so tens of millions of borrowers got nothing. While Republicans were busy blocking student loan refinancing, our country’s student debt problem got worse, much worse.”

So in 2016, the year of the U.S. presidential election, the democrats have their great political talking point, garnered at the expense of college students who have been held hostage to the higher college loan interest rates since mid 2013. Then the political clueless elite sit back wondering why young people have been flocking to the self-described socialist presidential outsider, Senator Bernie Sanders.