aside The Americans Are The Adults, Part XV (Racism) 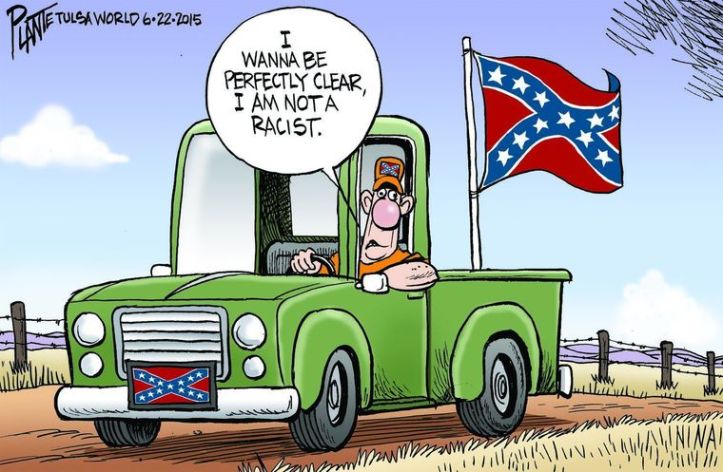 One favored talking point by republicans is that, the problem of racism in the U.S. culture is over stated. While the republicans have been in a state of denial, we have been subject to hearing for years about how our U.S. president is a Muslim who is not really an American citizen among other nefarious descriptions. Those in leadership positions within the republican party have done virtually nothing to publicly disavow this rhetoric and this lack of respect for our President Barack Obama, with the one exception of Senator John McCain. Today, there are numerous public polls indicating that a majority of republicans believe that President Barack Obama is indeed a Muslim. Anyone who answers yes to the Muslim question despite over-whelming   evidence to the contrary, can be tagged as a racist. With the majority of self-identified republicans clinging to this outright lie, it would be an understatement, to state that the republican party has become infiltrated with a major faction of racists.

Speaking for myself, as a registered republican I am heart broken that this party has been reduced to having the likes of Donald Trump, as the probable 2016 republican presidential nominee.

For an example of how racism has insinuated itself in the republican party, then we need look no further than the recent 3/11/16 shut down of Donald Trump’s Chicago’s downtown rally. Donald Trump has been catering to these racists within the party for months. The mob atmosphere of those vehement supporters of Mr. Trump versus those who oppose his racist speak was something to behold. The republican party is now crying fowl but this is what happens when this party is dependent on the votes of a minimum 20% of their base who are racists. When Donald Trump yells, that he plans to make America great again, too many on both sides are hearing that he wants to make America great again for White folks.

During the week of February 21, I watched a TV show, where a Wall Street Journal reporter joined in a conversation about how the police target minority dominated areas to conduct stop and frisk tactics, by deflecting to another republican favorite talking point, Black on Black crime. Folks, there is also White on White crime too at a rate of about 82% (based on 2014 FBI published data), but this does not bar White victims from filing complaints when they have been mistreated by law enforcement. Why should our Black brothers and sisters be subject to a lesser standard?

There are a few republican party insiders who are attempting to address head on, the issue of racism within the ranks. For instance, Francis Wilkinson tells how the Texas Governor, Rick Perry confronted his party about this issue in a 7/10/15 Bloomberg article, “Republicans Wake Up to Racism”

Here are some excerpts:

“Perry’s address at the National Press Club about economic opportunity had a remarkable opening. He spent the first few paragraphs recounting the “unimaginable horror” of the 1916 lynching in Texas of 17-year-old Jesse Washington. Perry spared neither grisly details nor their significance: Washington was tortured to death, Perry said, “because he was black.” 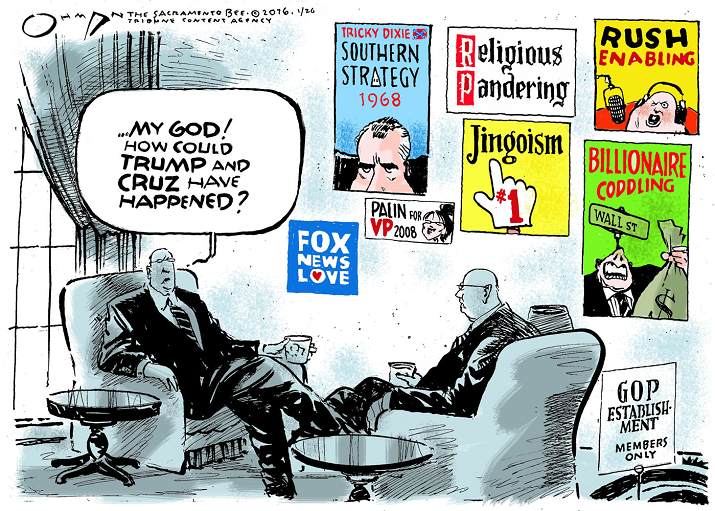 As Perry proceeded to discuss poverty and progress, race remained a central theme. “We cannot dismiss the historical legacy of slavery, nor its role in causing the problem of black poverty,” Perry said. “And because slavery and segregation were sanctioned by government, there is a role for government policy in addressing their lasting effects.”

“Brian Beutler andJonathan Chait have each analyzed the speech, from different angles, sizing up the conundrums Republicans confront: opposing the federal power that has been the sole guarantor of black rights, and seeking non-white votes while promoting policies that cut public investment, which enables the poor to rise, and while making the tax code a bonanza for the already wealthy, who are overwhelmingly white.”

“Perry’s speech did not square that lumpy circle. But liberal cities have failed —often flag-entry— to provide opportunity to poor black residents. Perry noted that the rate of poverty among blacks is lower in Texas than in high-cost blue states. Black voters have consistently preferred Democrats’ clumsy helping hand to Republican contempt. If Republicans could free themselves of disdain, the high bar on competing for black votes would begin to descend. Acknowledging real American history, the most vile along with the sublime, may be a necessary prerequisite to that task.” 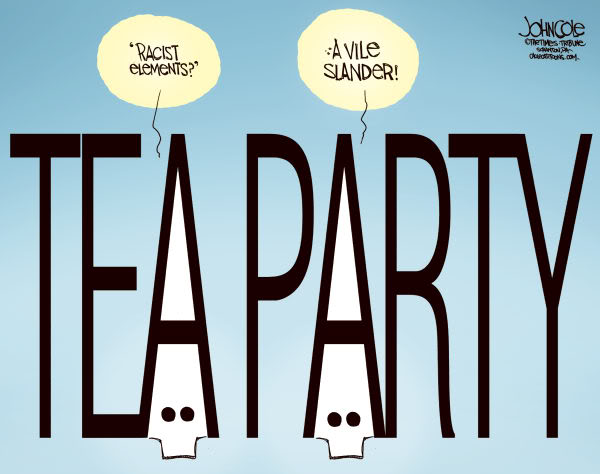 “Republicans don’t talk much about lynchings. They rarely mention discrimination or racism. Research shows a Republican base both eager to deny that racism is a significant factor in American society and prone to explicit “anti-black attitudes.” When blacks gained civil rights protection in 1964, after more than three centuries of brutalization, millions of white Americans concluded that whites were the true victims, abused by federal power. Those resentments endure.”

“In 2005, then-Republican National Committee Chairman Ken Mehlman, at a convention of the National Association for the Advancement of Colored People, apologized for his party. “Some Republicans gave up on winning the African-American vote, looking the other way or trying to benefit politically from racial polarization,” he said. “I am here today as the Republican chairman to tell you we were wrong.” The speech received scant attention. But it fit the posture of the George W. Bush administration, which made quiet progress on race.” 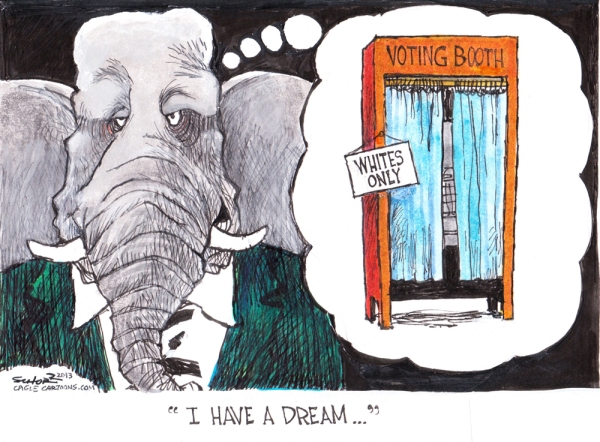 “Now, arguably for the first time, a concerted battle is being waged in the heart of the Republican base — the white South. Confederate flags coming down in Alabama and South Carolina, at conservative insistence, confirm that Republicans have neither a political death wish nor a void where their consciences should be. A tearful Republican legislator demanding that South Carolina banish its symbol of racial “hate,” and winning the fight, is a watershed in American politics.”

“Perry’s speech is best understood not as a disjointed defense of local government or conservative economic policies, but as another downward tug on white supremacy. If racism was as real and deep and vicious as Perry contended in his speech, and if it is important enough to be the stuff of Republican presidential campaigns, then it may have not only twisted the American past into ugly shapes previously ignored by conservative orthodoxy. It might still cast a grim shadow over the party and the nation. Perry acknowledged that government has a role in addressing that. That’s a start.”