Other sites or experiences within Palermo that we sought out were the art museum, Galleria Regionale Siciliana-Palazzo Abatellis; one of the huge local outside markets; and the Hammam Turkish Bathhouse and spa.

There are three major outdoor markets in Palermo. There is the Capo Market located in the Il Capo district in the northwest section of Palermo. The  Mercato Vucciria market in Vucciria (northeast area) is  the city’s largest and most colorful market (with the most tourists). According to those in the know, this is the best place to taste test some of the most popular street foods. Then there is the Ballaro Market in Alberheria (south-west quadrant) which is within a 5 minute walk to the Palazzo Normanni/ Palazzo Reale, the Capella Palatina. It is noisy and thronged with the local crowds while the vendors loudly hawk their wares which include items like octopus, eastern spices and household goods. After this cultural immersion, head west along the Via Porta di Castro to find ground zero where Palermo’s top attractions are located. It makes sense to combine an 1/2 hour tour at this market along with the nearby castles complex at Piazza Indipendenza, and then the Chiesa di San Giovanni degli Eremiti.

To discover the art museum, we had to walk north on the Corso or Via Vittorio Emanuelle  in the Kalsa district towards the water. Once you’ve seen the puppet museum, then the art museum, Galleria Regionale Siciliana-Palazzo Abatellis is nearby-east, just off of Via Alloro.

The galleria’s editor of their guidebook writes:

“The most important regional art gallery in Sicily and one of the most famous art galleries in Italy, Galleria Regionale della Sicilia is located in Palazzo Abatellis, a work of art in itself.”

“The exhibits present the art history and heritage of the Sicilian area from the 13th to the 18th century. One of the main attractions is the Triumph of Death, a piece dating from the 15th century and with uncertain attribution.”

The Galleria Regionale Siciliana; Galleria d’Arte Moderna; the puppet museum (Museo Internazionle delle Marionette), and the Museo dell’ Inquisizione are all in the same area of La Kalsa and there are signs along the way directing your travel.

The Giardino Garibaldi (Garibaldi Garden) is nearby these museums which provides a respite area to sit and enjoy the surroundings of elegant palazzis near the gentrified Piazza Marina. This interesting garden encompasses a huge Banyan tree which is about 150 years old.

As we approached this garden while conversing in English, we noticed a group of teenagers with an adult in charge. Then two of them came up to us to request if they could practice their English while they escorted us around the premises. And so these attractive students graciously took us around while they said whatever they had memorized.

To walk to the HAMMAM Spa, when we exited our hotel, we turned right  on the Via Maqueda which becomes Via Ruggero Settimo and then Viale della Liberta. As we strolled along on the Via Maqueda, we passed the Teatro Politeama to enter the New City section of Palermo. In New City the Via della Liberta runs north  from Piazza Castlenuovo which is a landmark point indicating the start of the most glamorous part of the city. It is lined with art nouveau, high end villas with nearby gardens.

You can visit the Giardino Inglese (English Garden) and the Villa Trabia from right off this Viale di Liberta street. This is another area where you can take time out to relax as you amber along enjoying the grounds of the garden and villa. As we continued on the route to the Hammam Turkish Bath and Spa, along the way, we did our window shopping at the numerous designer shops. There were also upscale restaurants, cafes,  and  luxury apartments.

On the main route of Viale di Liberta, we passed by Via di Principe Belmonte, a pedestrian only street in New City where the restaurant, Antica Caffe Spinnato is on the corner. Finally we turned right off of Viale della Liberte onto Via Torrearsa  to reach the spa a little early. So we just hung out relaxing and chatting. The spa itself had a very calming vibe, aromatic scents and music.

Before our scheduled time, we were shown to a room with sofas set in an oriental décor.  Eventually, the professional masseurs escorted us to our rooms were we succumbed to their expert  hands, guaranteed to help anyone feel better. 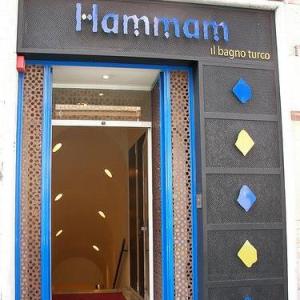 Then we were guided to the Turkish bath area but I was surprised not to see a pool. Instead there were buckets with hot water and a ladle to continually spoon the water over ourselves until the buckets were empty. The floor and room were huge with a  bath-room bench, tiles and drains. The Turkish bath attendant advised me to cover myself with their scrub type cream and then she pointed out the sauna which I entered. After a few moments, I would dunk myself in the adjacent hot tub, and then I would go back and forth between the both.

Finally, the attendant used a glove to scrub away any dead skin. After some time, I was directed to the showers to clean up. We returned to the room full of sofas, pillows, oriental furnishings to stretch out while we waited for tea and biscuits.

It took some time to enjoy our treats. We tried our best to converse with the other clients in the same room. Finally, we took our leave to go and freshen up before we exited the spa.

That same evening we ordered take out food from a local pizzeria to be delivered to our hotel room. And then we temporarily died to the world’s chaos.