From the time we touched foot in Sicily, we had been going full speed to make sure to see and do as much as our hearts desired, but we kept forgetting that we are in our upper 60’s. We used this stay in the gorgeous, baroque, historical gem of Ortigia to slow down a little. Our last day was one of walking nearby on the waterfront, taking time out to sit in a piazza to watch the passersby’s, followed by a spa afternoon. No sooner had our concierge mentioned that there was a spa next door, before we were walking into the entrance of Domus Maraie Benessere Hotel (+39 0931 64475) to make spa arrangements at the lobby desk. There was only one professional masseuse available, so I and my friend took turns. The massages were affordable and beyond awesome.

For our last evening in Ortigia, we ate at the hotel restaurant. Among all our selections and Prosecca, we decided to be adventurous with one choice which was an Ortigian specialty of octopus with mashed potatoes. While we did partake of this dish, it is an acquired taste that takes time to develop. This is a memory seared into my brain forever.

The next morning, we took time to eat a lovely breakfast before checking out of this truly charming hotel, Algila Ortigia Charme, Right around this time, our driver arrived to assist us with our bags while he escorted us to his car. Soon we were on our way to Sicily’s second largest city, Catania for a one night sojourn at our accommodations at Il Principe Hotel,  Via Alessi, 24, Catania CT, Italy, phone: +39 095 250 0345.

We arrived at our Catania hotel in the early afternoon. While we were registering, we were provided a map with the top sights listed.

It took a while to get settled into our hotel room. The first room that we walked into did not have double beds which we always specifically request. We had to wait for housekeeping to prepare a room for us that met our requirements.

“For all the noise, chaos and scruffiness that hit the visitor at first glance, Catania has a strong magnetic pull. This is Sicily at its most youthful, a city packed with cool and gritty bars, abundant energy and an earthy spirit in sharp contrast to Palermo’s aristocratic airs.”

“Catania’s historic core is a Unesco-listed wonder, where black-and-white palazzo tower over sweeping baroque piazzas. One minute you’re scanning the skyline from a dizzying dome, the next contemporary art in an 18th-century convent. Beneath it all are the ancient ruins of a town with over 2700 candles on its birthday cake. Indeed, food is another local forte. This is the home of Sicily’s iconic pasta alla Norma and the extraordinary La Pescheria market.”

“Keeping an eye on it all is Catania’s skyscraping frenemy, Mt Etna, a powerful presence that adds another layer of intensity and beauty to Sicily’s second-biggest city.” 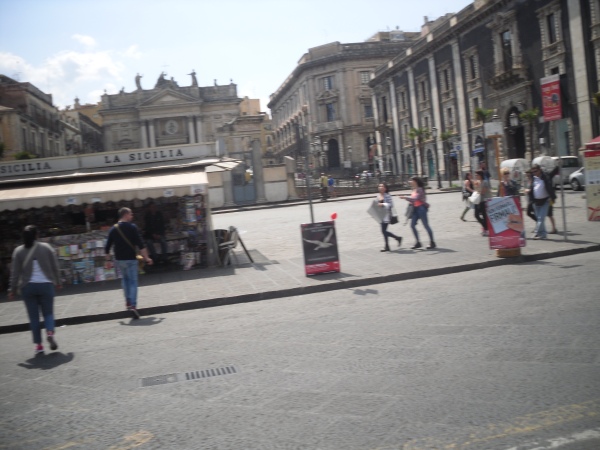 Soon after being shown to our room we set out to explore the area. We found a tourist office downtown on Via Vittorio Emanuelle II; (Near the Piazza Duomo) cell phone 0039 340 6090488; Email address is touristservicecatania@gmail.com. The agents on staff helped us with purchasing a ticket to hop a train similar to the ones in Key West and St. Augustine, Florida which snake around all the major attractions within a relatively compact area.  We decided on this tactic because we were remaining in Catania just for one night, and this was the easiest way to see as much as possible. For the next morning, we already had train tickets to travel from Catania, Sicily to Naples, Italy.

Note: Any tourist can download a travel guide from the site, “www.getyourguide.com. The following are cliff type notes from this internet site.

“The Catania Cathedral has been shaken to its very foundation several times thanks to dear old volcano Mount Etna. Still, humans persevered and kept rebuilding the cathedral. Behold the Baroque style of the structure with your own eyes.”

“Tickets to the theater aren’t necessary if you’re cruising by to see the stunning architecture of this opera house. The 200 years it took to complete the Teatro Massimo Bellini were well worth the effort.”

“A pristine example of Sicilian Baroque architecture, the Basilica della Collegiata was built in the 18th century following the destruction caused by the earthquake of 1693.”

“Only in Italy would government bureaucracy decide to make the City Town Hall inside a palace. After you tour the Palazzo continue exploring Cathedral Square. The palace is located on the northern side of the square.”

“The amphitheater in Catania is a bit smaller than the Colosseum in Rome and can hold up to 16,000 visitors. Inside you can explore the nooks and crannies of a historic Roman amphitheater.”

“Located in one of the main squares in Catania, the Piazza Duomo is famous for the elephant statue, the Lenzulo fountain, and of course the Duomo. Climb up to the top of the Duomo to look over the whole city”

This write up regarding the elephant statue is from the Best of Sicily magazine: “.

“Both the obelisk and the elephant were objects of mystic veneration. Isis was a mourner and enchantress thought to bring the dead back to life. Not surprisingly, her name was often invoked in the rites of the dead. Elephants were symbolic of strength, fidelity and long life. This one was probably thought to be a bearer of good luck against Etna’s eruptions”.

“Catania had more frequent contact with the East than most other Greek cities in Sicily. Its trading links to Phoenician and Greek cities, and in turn Egyptian ones, were many, and this influenced local mythology. Isis was probably worshipped in Catania long before the arrival of the obelisk. It is quite possible that this particular obelisk was chosen based on the city’s prior association with this deity.”

“Marvel at intricate frescoes on your visit to San Benedetto, a beautiful monastery. You’ll be pleased to learn that San Benedetto even offers audio guides in multiple languages for visitors.” (Cannot be seen via the little train)

“This thirteenth century castle will take your breath away. It was built for the Kingdom of Sicily, back when Sicily was a kingdom and today houses a museum open to the public.” (This site could not be viewed from the train tour).

For kid-friendly tour of Catania, take a choo-choo train! – Becca Garber/ beccagarber.com/kid-friendly-tour-catania-take-choo-choo-train/Feb 25, 2014 – The miniature train is always driving around the center of “the big city…