The 12/21/13 LA Times expose`on Wells Fargo details exactly the same screen play that C-Span viewers witnessed this past Tuesday (9/20/16) when the Wells Fargo CEO, John Stumpf testified before the U.S. Senate Banking Committee Hearing regarding the scandal of his bank agents having opened over 2 million accounts without their customers prior knowledge and approval. The Senators from both sides of the aisle grilled him about the company’s well known practice of imposing on his front line employees, the cross selling unrealistic sales goals (the standard is 2 to 3 accounts) of 6 to 8 accounts per client, to where the agents felt forced to dummy up accounts to keep their jobs. Of course Mr. Stumpf claimed that he was taking full responsibility; that measures were underway to correct customer accounts and to prevent similar future incidents; and that he had fired over 5,300 offending employees.

As per a 9/23/16 Bloomberg article, “Wells Fargo Sued Over Firings for Missed Account Quotas,”published on 9/23/16, by Kartikay Mehrota:

“The bankers (former employees) who sued, Alexander Polonsky and Brian Zaghi, are seeking class-action status on behalf of other Wells employees in California who were fired or demoted during the past 10 years and are asking for at least $2.6 billion in damages. The suit includes claims of wrongful termination, retaliation, unlawful business practices and failure to pay wages. Delshad said his clients are no longer Wells Fargo employees and that one is now a real estate agent. The case is Polonsky v. Wells Fargo Bank & Co., BC634475, California Superior Court, Los Angeles County (Los Angeles).”

See the following excerpts to determine if there are any deviations in Mr. Stumpf’s story line as depicted in the 2013 LA Times article by Scott Reckard, from his 2016 performance:

“Bank manager Murillo, 41, now employed by another bank, said she resigned from her Wells Fargo branch in the Fort Myers, Fla., area in 2010, even though she had no other job lined up and her husband wasn’t working full time. The couple ended up losing their home.”

“It all seemed worth the chance and the risk, rather than to deal with the mental abuse,” Murillo said. “Just thinking about it gives me palpitations and a stomachache.”

“In February, Becky Grimes, 57, quit Wells Fargo after 14 years as a branch manager in Victoria, Texas. She said she retired early because employees were expected to force “unneeded and unwanted” products on customers to satisfy sales targets.”

“I could no longer do these unethical practices nor coach my team to do them either,” Grimes said.”

“The tracking starts each morning. Managers are asked not only to meet but to exceed daily quotas passed down by regional bosses. Branch managers are expected to commit to 120% of the daily quotas, according to the former Pacific Northwest branch manager, who said results were reviewed at day’s end on a conference call with managers from across the region.”

“If you do not make your goal, you are severely chastised and embarrassed in front of 60-plus managers in your area by the community banking president,” the former branch manager said.”

“The documents, dated from 2011 through October, include a 10-page report tracking sales of overdraft protection at more than 300 Southland branches from Ventura to Victorville; a spreadsheet of daily performance by personal bankers in 21 sales categories; and widely distributed emails urging laggard branches to boost sales and require employees to stay after hours for telemarketing sessions.”

“An email from a Southern California district manager in 2011 criticized a dozen branches for signing up only 5% to 38% of new checking accounts for overdraft protection — an opt-in service that charges customers $35 for each overdraft the bank covers.”

“A report this spring from a district in the Southwest provided a count of direct-deposit accounts opened by each of 11 branches during a 15-day period, also with the percentage of customers who signed up for overdraft protection.”

“Tarzana retiree Bette Hirsh Levy closed her Wells Fargo checking account last year after discovering that a branch employee had approved her for an $8,200 line of credit without her permission. “I have had a six-figure line of credit with Wells for several years,” Levy said. “There was no reason for me to open another.”

“David Douglas made similar accusations against Wells Fargo in a lawsuit filed Sept. 11 in Los Angeles County Superior Court. He alleges that three Wells Fargo employees in Century City and Beverly Hills used his birth date and Social Security number to open accounts in his name and those of fictitious businesses.”

“They put their own addresses on the accounts so he wouldn’t know about it,” Kade said. “It showed up on his credit report — that’s how he found out.”

“A Nevada lawsuit filed in 2009 by Amber Salazar, on behalf of Wells Fargo business bankers in the state, won certification as a class action. The suit claimed that Wells misclassified the bankers as managers, failed to pay overtime and required them to work unpaid “call nights” to solicit business.”

“Prior to his October firing, Wells Fargo business specialist Estrada worked at the Canoga Park branch. He said the manager would greet the staff each morning with a daily quota for products such as credit cards or direct-deposit accounts. To fail meant staying after hours, begging friends and family to sign up for services. He said branch and district managers told him to falsify the phone numbers of angry customers so they couldn’t be reached for the bank’s satisfaction surveys.” 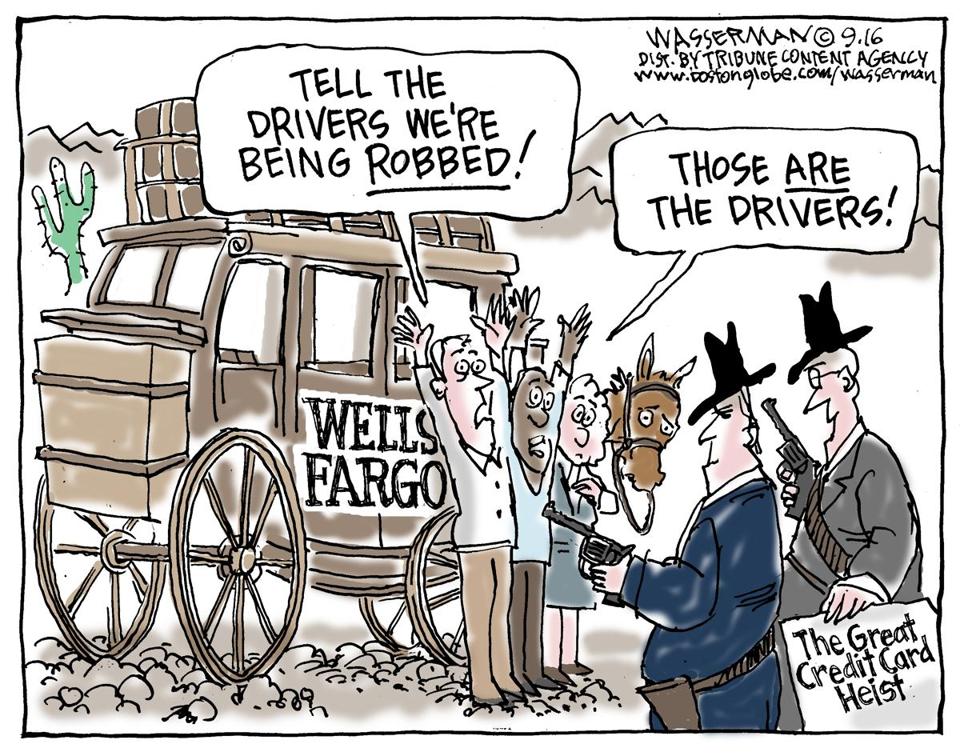 “Estrada said employees would open premium checking accounts for Latino immigrants, enabling them to send money across the border at no charge. Those accounts could be opened with just $50, but customers were supposed to have at least $25,000 on deposit at Wells Fargo within three months or pay a $30 monthly charge.”

“To get around those requirements — and keep earning credit toward their quotas — Estrada said employees would downgrade the original accounts and open new premium ones for the customers before the fees kicked in.”

If there was ever a time for the DOJ and the SEC to flex their muscles to hold individual top executives criminally accountable for overseeing widespread fraudulent activities within their shady enterprise, this is it. Wells Fargo executives have been acting like white collar Mafia Dons for years. This financial institution takes in revenues to the tune of billions of dollars to where the government fines and law suit settlements, are simply considered the cost of doing business.

Related Articles: (Read the following law suits notes to gain a better understanding as to how Wells Fargo conducts its business)

U.S. Sues Wells Fargo: Yet Another Bailed-Out Bank Accused of Fraud     …http://www.rollingstone.com/…/u-s-sues-wells–fargo-yet-another-bailed-out-bank…Oct 10, 2012 – Wells Fargo not only got $25 billion in TARP funds just before it bought Wachovia, it got a tax break from then-Treasury Secretary Hank Paulson, worth as much as $25 billion…