aside “We The People” Must Be Vigilant v Any Of President-Elect’s Sleight Of Hand, Part II (Taxes)

The republican President-elect Donald Trump has promised his followers that he would not take any action to harm American workers. Many of us who did not vote for him intend to hold him accountable for keeping his commitments to those who supported him.

This includes the concept that any future tax reforms should be targeted to mostly benefit the middle class and those living in poverty versus the top 1% who have already been amply rewarded over the past couple decades with huge increases in their salaries. bonuses, perks, stock options etc to where top executives earn at a minimum of up to 100 times what the average front line employees make.

It is no wonder that there are angry workers out their who are demanding real reform.

Unfortunately, the republican President-elect Donald Trump current tax reform plan favors mostly those at the top 1% of the income bracket.

The 11/13/16 NPR  article by John Ydstie, “Who-Benefits-from-Donald-Trumps-Tax-Plan,” details who are the beneficiaries of his tax reform proposal:

“Donald Trump has proposed a very detailed tax plan — but his statements on the campaign trail don’t always match what his proposal would really do.”

“For instance, at a rally in Scranton, Pa., Trump promised to “massively cut taxes for the middle class, the forgotten people, the forgotten men and women of this country, who built our country.” During a town hall meeting on NBC’s Today show, he said he believes in raising taxes on the wealthy.”

“And at least half of Trump’s supporters agreed with him on that, according to a pre-election survey by RAND Corp., a research group.”

“Just before the election, after the last debate, 51 percent of them intending to vote for Trump supported increasing taxes on high-earning individuals,” says Michael Pollard of RAND.”

“But Trump’s plan does the opposite, says Lily Batchelder, a law professor at New York University and visiting fellow at the Tax Policy Center.”

“If you look at the most wealthy, the top 1 percent would get about half of the benefits of his tax cuts, and a millionaire, for example, would get an average tax cut of $317,000,” she says.”

Donald Trump proposes having three tax brackets, down from the current seven, and repealing the head-of-household tax-filing category. The standard deduction would be $30,000 for married couples filing jointly (up from $12,600 currently) and $15,000 for single individuals (up from $6,300).

“But a family earning between $40,000 and $50,000 a year would get a tax cut of only $560, she says, and millions of middle-class working families will see their tax bills rise under Trump’s plan — especially single-parent families.”

“A single parent who’s earning $75,000 and has two school-age children, they would face a tax increase of over $2,400,” Batchelder says. That’s if they had no child-care deductions; the increase in taxes comes partly because the Trump plan eliminates the $4,000 exemption for each person in a household.”

“Steve Calk, a Trump economic adviser, says the loss of the exemption is partially offset by other changes in Trump’s plan. He takes issue with the Tax Policy Center’s analysis and argues that there will be big tax cuts for middle-income families.” 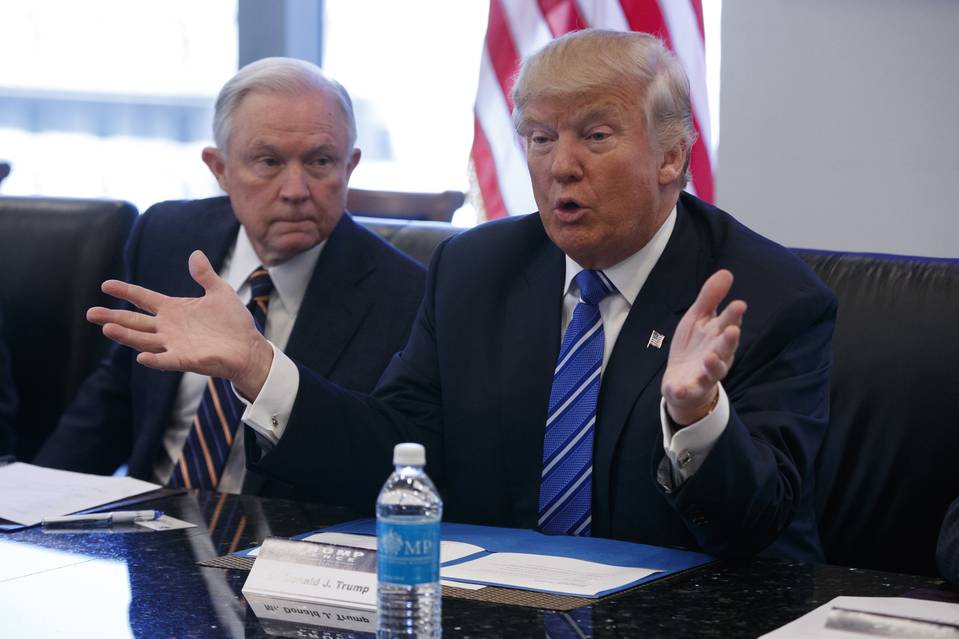 “(Lily) Batchelder says that calculation is misleading because it focuses on tax rate reduction rather than a family’s after-tax income — in other words, how much money they have in their pocket after taxes.”

“But Calk argues the personal-income tax cuts, as well as the Trump proposal to reduce the corporate tax rate from 35 percent to 15 percent, will help taxpayers by boosting economic growth.”

“The single best way to help people that are in the low-income bracket or unemployed or underemployed is, No. 1, to get them employed in real jobs with real benefits,” Calk says.”

“Economists disagree on whether the tax plan would be good for the economy. The Tax Policy Center says that over the first decade, the government would lose $6.2 trillion in revenue, producing huge budget deficits that could hurt the economy.”

One other element of the Trump plan is worth noting: It would eliminate the federal estate tax entirely. Only the wealthiest taxpayers — less than 1 percent — now pay that tax. Ending it would lead to an even greater concentration of wealth in the U.S.

The 9/15/16 Forbes article by Ryan Ellis lists the positive and negative points of the Trump Tax Plan (The complete text is footnoted below):

“First, the good. The plan reduces the number of individual tax brackets from seven to three, in the process cutting the top marginal income tax rate from 39.6 percent to 33 percent. The corporate income tax rate is reduced from 35 percent to 15 percent. The dreaded alternative minimum tax (AMT) is repealed. For families, there is a generous standard deduction, a de facto bigger child deduction, and a very broad 12 percent introductory tax rate on the first $75,000 of taxable income.”

What is the AMT?

The individual alternative minimum tax (AMT) operates alongside the regular income tax. It requires many taxpayers to calculate their liability twice—once under the rules for the regular income tax and once under the AMT rules—and then pay the higher amount. Originally intended to prevent perceived abuses by a handful of the very rich, it now affects over 4 million filers.