aside Will LT. General Mike Flynn Be Outflanked By Two 4 Star Generals

The republican President-elect Donald Trump has appointed retired Lt. General Mike Flynn to be his National Security advisor, a position that does not require confirmation by the U.S. senate. This is a man who has called Islam as a whole a “cancer” during a recent speech to the Ahavath Torah Congregation in Stoughton, Massachusetts. Here are his words, “We are facing another ‘ism,’ just like we faced Nazism, and fascism, and imperialism and communism. This is Islamism, it is a vicious cancer inside the body of 1.7 billion people on this planet.”

This general has also demonstrated his penchant for “fake news.” A 12/14/16 CNN News report details the following:

“Incoming National Security Adviser Michael Flynn has quietly deleted a tweet with a link to a fake news story about Hillary Clinton’s involvement in sex crimes with minors.”

“In the since-deleted tweet from Nov. 2, Flynn linked to a story on TruePundit.com that falsely claimed the FBI investigation into Anthony Weiner had turned up evidence “to put Hillary (Clinton) and her crew away for life.”

After this appointment, president-elect selected 4 star General James Mattis to be his Defense secretary who in an aside, happens to be a firm believer that climate change is a national security threat. This choice surprised me because of his past history with General Mike Flynn not being a positive one. The scuttlebutt has it that the president-elect has been listening to the former Defense Secretary Bob Gates when it comes to filling foreign policy positions.

General Mattis recommended the other 4 star General John Kelly who is being considered for the Homeland Security opening.

“In an interview with The (Washington) Post in August, Flynn acknowledged that he had been investigated for giving classified information (2010) to British and Australian officials — America’s closest allies — serving in Afghanistan alongside U.S. forces.”

(Army) “documents, obtained by the (Washington) Post under the Freedom of Information Act, do not describe what Flynn shared or with whom while he was the top military intelligence officer in Afghanistan. The Post said the material had to do with CIA activities.”

“Army documents say the investigation determined that Flynn did not have permission to share the secrets.”

“The Defense Department’s inspector general’s office, which conducted an independent review of the investigation, came to the same conclusion, the documents state.”

“The investigation concluded that he did not act “knowingly” and that “there was no actual or potential damage to national security as a result.”

“It also points out that no disciplinary action was taken against Flynn.”

“The Army investigation was ordered by the head of U.S. Central Command, whose commander at the time was retired Marine Gen. James Mattis, Trump’s pick to be defense secretary.”

“It was General Mattis who removed General Mike Flynn from his intelligence role in Afghanistan in 2010 based on these investigations.”

The following excerpts are from the 12/11/16 Business Insider article, Michael Flynn’s former colleagues describe him as volatile and ‘unbelievably arrogant’ by Pamela Engel:

“When Lt. Gen. Michael Flynn, President-elect Donald Trump’s pick for national security adviser, was working at the highest levels of the military-intelligence field, he had a reputation as a brilliant tactician.”

“But then, in 2014, he was forced to retire as the head of the Defense Intelligence Agency. US officials cited clashes over his leadership style, but he claims it was because he took a stand about “radical Islam.” (It was probably due to both.)

“Eventually, he wrote a book about how to “win the global war against radical Islam,” and he became one of Trump’s most ardent supporters.”

“Some in the military and intelligence communities were shocked to see Flynn encouraging chants of “Lock her up!” at the Republican National Convention, referring to Trump’s Democratic opponent, Hillary Clinton. And later in the campaign season, reports surfaced of Flynn clashing with officials who conducted a national-security briefing for Trump.” 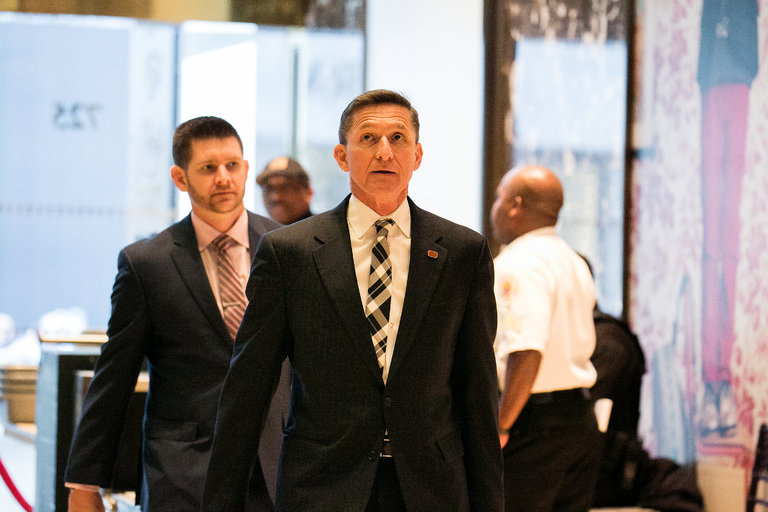 “Flynn’s most recent controversy involved his son, who promoted a conspiracy theory  on Twitter developed through fake news stories that made the baseless claim that a pedophilia ring involving high-level Democratic Party officials was operating out of a Washington pizzeria. Flynn himself has promoted fake news stories on his Twitter feed.”

“Daniel W. Drezner, a professor of international politics at the Fletcher School of Law and Diplomacy at Tufts University, concluded in his column for The Post that Flynn “should be kept as far away from power as humanly possible.”

“Some of Flynn’s former coworkers painted a picture of the lieutenant general that seems to support that concern.”

“Sarah Chayes, who is now at the Carnegie Endowment for International Peace, was a special adviser to Gen. Stanley McChrystal, who worked very closely with Flynn, in Afghanistan in 2009. She told Business Insider she shared an office with Flynn for more than a year during this time.”

“She described a “14-year-old disruptive kid” who often contradicted himself.”

“I would put this like — imagine if the kid, the sort of transgressive, fun, energetic, arrogant boy in the back of the class, that that’s like who you’re working with,” Chayes said. “It was very high-energy, it is fun, he’s fun to be around, but unbelievably arrogant.”

“Chayes said that when McChrystal’s team, including Flynn, who was a military-intelligence officer at the time, arrived at a NATO headquarters in Afghanistan, they “blasted in basically saying everything was all screwed up.”

“They said “they were going to, not only they could fix it, they would fix it, but it was like … the implication was very insulting to the entire command and that obviously felt like something that was problematic,” she said.”

“It was not only the individual officers being insulted, but countries we’re in an alliance with … They had put lots of people and efforts and energy and matériel into this fight,” Chayes continued.”

“Chayes described a person who spoke in constant contradictions.”

“You listen to him closely for six or seven minutes and he will have contradicted himself two or three times,” she said.

“She also described him as a rule-breaker, which fits with what he wrote in his book about being a “maverick.”

“There was a sense in that headquarters and with him … kind of like the rules didn’t apply to him,” Chayes said.

“Another source told The New Yorker that Flynn often wrote “This is bullshit!” in the margins of classified papers he passed up the chain.”

“Someone who worked with both McChrystal and Flynn said McChrystal encouraged Flynn to control his outbursts and listen to colleagues who challenged the unsubstantiated theories he promoted.”

“Many former colleagues who have talked to the press (often anonymously) since Flynn was named Trump’s national security adviser have called him tactically brilliant but said he struggles with broad strategy.”

“He made a lot of changes,” one source told The New Yorker of Flynn’s time at the DIA. “Not in a strategic way — A to Z — but back and forth.”

Retired Navy Adm. James Stavridis, who is currently the dean of the Fletcher School, made a similar assessment.

“As national security adviser, he will easily do the ‘adviser’ part of the role,” Stavridis said. “But he will have to develop the ability bring opposing views from each of the cabinet officials into synthesis for the president. It is a very tough job.”