The following information is contained within the MI6 dossier which is currently being verified by the US intelligence community. Some of the information contained within the 35 page dossier have already been confirmed, but not all. While the below details provide a plausible explanation as to why our republican President Donald Trump has been acting favorably towards Russia, the specifics have not been confirmed.

The rest of the story…

“A dossier with unverified claims about President Donald Trump’s ties to Russia contained allegations that Igor Sechin, the CEO of Russia’s state oil company, offered former Trump ally Carter Page and his associates the brokerage of a 19% stake in the company in exchange for the lifting of US sanctions on Russia.” (They were allegedly offered the brokerage of the 19% stake, whose purchase by the QIA and Glencore was ultimately facilitated by Gazprombank.)

“The dossier says the offer was made in July, when Page was in Moscow giving a speech at the Higher Economic School. The claim was sourced to “a trusted compatriot and close associate” of Sechin, according to the dossier’s author, former British spy Christopher Steele.”

“Sechin’s associate said that the Rosneft president was so keen to lift personal and corporate western sanctions imposed on the company, that he offered Page and his associates the brokerage of up to a 19 per cent (privatized) stake in Rosneft,” the dossier said. “In return, Page had expressed interest and confirmed that were Trump elected US president, then sanctions on Russia would be lifted.”

“Four months before the intelligence community briefed Trump, then-President Barack Obama, then-Vice President Joe Biden, and the nation’s top lawmakers on the dossier’s claims — most of which have not been independently verified but are being investigated by US intelligence agencies — a US intelligence source told Yahoo’s Michael Isikoff that Sechin met with Page during Page’s three-day trip to Moscow. Sechin, the source told Yahoo, raised the issue of the US lifting sanctions on Russia under Trump.”

“Page was an early foreign-policy adviser to the Trump campaign. He took a “leave of absence” in September after news broke of his July trip to Moscow, and the campaign later denied that he had ever worked with it.” 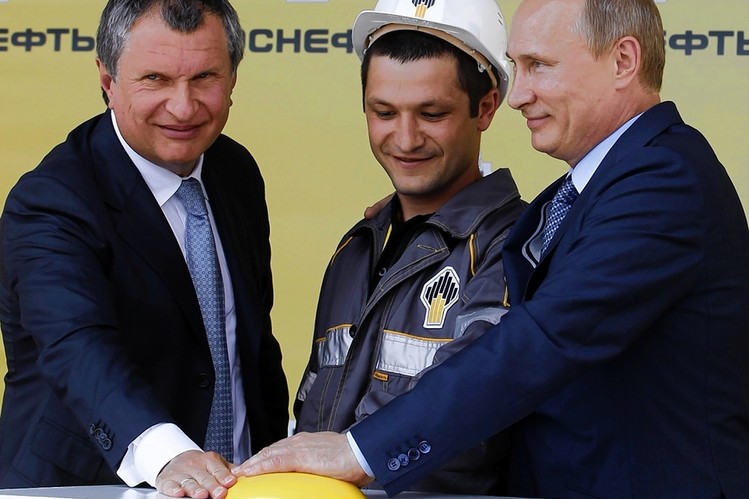 “Page, for his part, was “noncommittal” in his response to Sechin’s requests that the US lift the sanctions, the dossier said. But he signaled that doing so would be Trump’s intention if he won the election, and he expressed interest in Sechin’s offer, according to the document.”

“In a recent interview with The Wall Street Journal, Trump suggested the sanctions could be lifted if Moscow proved to be a useful ally. “If you get along and if Russia is really helping us,” Trump asked, “why would anybody have sanctions if somebody’s doing some really great things?”

“Page has criticized the US sanctions on Russia as “sanctimonious expressions of moral superiority.” He praised Sechin in a May 2014 blog post for his “accomplishments.” in advancing US-Russia relations. A US official serving in Russia while Page worked at Merrill Lynch in Moscow told Isikoff that Page “was pretty much a brazen apologist for anything Moscow did.” “Page is also believed to have met with senior Kremlin internal affairs official Igor Diveykin while he was in Moscow last July, according to Isikoff’s intelligence sources. The dossier separately claimed that Diveykin — whom US officials believe was responsible for the intelligence collected by Russia about the US election — met with Page and hinted that the Kremlin possessed compromising about Trump.”

“It is unclear whether Isikoff’s reporting is related to the dossier, which has been circulating among top intelligence officials, lawmakers, and journalists since mid-2016.”

A scramble for a foreign investor

“After mid-October, the dossier said, Sechin predicted that it would no longer be possible for Trump to win the presidency, so he “put feelers out to other business and political contacts” to purchase a stake in Rosneft.”

“Rosneft then scrambled to find a foreign investor, holding talks with more than 30 potential buyers from Europe, the US, Asia, and the Middle East. The company signed a deal on December 7 to sell 19.5% of shares, or roughly $11 billion, to the multinational commodity trader Glencore Plc and Qatar’s state-owned wealth fund. Qatar’s sovereign wealth fund is Glencore’s largest shareholder.”

“The “11th hour deal” was “so last minute,”Reuters reported, “that it appeared it would not close in time to meet the government’s deadline for booking money in the budget from the sale.”

“The purchase amounted to the biggest foreign investment in Russia since US sanctions took effect in 2014. It showed that “there are some forces in the world that are ready to help Russia to circumvent the [West’s] sanction regime,”said Lilia Shevtsova, an associate fellow in the Russia and Eurasia program at Chatham House.”

“In Russia we have a marriage between power and business, and that is why all important economic deals need approval and the endorsement of the authorities,” Shevtsova said. “This was a very serious commercial deal that hardly could have succeeded without the direct involvement of the Kremlin.”

“The privatization deal was funded by Gazprombank, whose parent company is the state-owned Russian energy giant Gazprom.”

“Page holds investments in Gazprom, though he claimed in a letter to FBI Director James Comey in September that he sold his stake in the company “at a loss.” His website says he served as an adviser “on key transactions” for the state-owned energy giant before setting up his energy investment fund, Global Energy Capital, in 2008 with former Gazprom executive Sergei Yatsenko.”

“There is no evidence that Carter played any role in the Rosneft deal. Buthe was back in Moscow on December 8- one day after the deal was signed — to “meet with some of the top managers” of Rosneft, hetold  reporters at the time. Page denied meeting with Sechin, Rosneft’s CEO, during that trip but said it would have been “a great honor” if he had.”

“The Rosneft deal, Page added, was “a good example of how American private companies are unfortunately limited to a great degree due to the influence of sanctions.” He said the US and Russia had entered “a new era” of relations but that it was still “too early” to discuss whether Trump would be easing or lifting sanctions on Moscow.”

“Page’s extensive business ties to state-owned Russian companies were investigated by a counterintelligence task force set up last year by the CIA. The investigation, which is reportedly ongoing, has examined whether Russia was funneling money into Trump’s presidential campaign — and, if it was, who was serving as the liaison between the Trump team and the Kremlin.”

“The dossier claims that Trump’s former campaign manager Paul Manafort asked Page to be the liaison. That claim has not been verified. Manafort served as a top adviser to a pro-Russian political party in Ukraine from 2004 to 2012 and emerged as a central figure in both the dossier and the intelligence community’s early inquiries into Trump’s ties to Russia.”