aside Republicans’ Healthcare Bill Does Not Cover Addiction Services

Remember all those voters going up to the presidential candidates during the 2016 campaign season, talking about their families dealing with a loved ones who were suffering from addiction issues. Even our republican President Donald Trump promised to expand treatment for those who have become so badly addicted when he heard these stories.

Well guess what is not covered in the republicans’ healthcare replacement plan? If you guessed that addiction services are not in the plan, you are right.

“The Republican proposal to replace the Affordable Care Act would strip away what advocates say is essential coverage for drug addiction treatment as the number of people dying from opiate overdoses is skyrocketing nationwide.”

“Beginning in 2020 (if not sooner), the plan would eliminate an Affordable Care Act requirement that Medicaid cover basic mental-health and addiction services in states that expanded it, allowing them to decide whether to include those benefits in Medicaid plans.”

“The proposal would also roll back the Medicaid expansion under the act — commonly known as Obamacare — which would affect many states bearing the brunt of the opiate crisis, including Ohio, Kentucky and West Virginia. Thirty-one states and the District of Columbia expanded Medicaid under the ACA.”

“Taken as a whole, it is a major retreat from the effort to save lives in the opiate epidemic,” said Joshua Sharfstein, associate dean at Johns Hopkins Medical School. Advocates and others stress that mental-health disorders sometimes fuel drug addiction, making both benefits essential to combating the opioid crisis.”

“Nearly 1.3 million people receive treatment for mental-health and substance abuse disorders under the Medicaid expansion, according to an estimate by health care economists Richard G. Frank of the Harvard Medical School and Sherry Glied of New York University.”

“House Republicans confirmed the benefit cuts during a meeting of the House Energy and Commerce Committee on Wednesday. Republicans on the committee argue that the change would give states additional flexibility in coverage decisions, and believe they would continue to provide addiction and mental-health coverage to Medicaid recipients if needed.”

“Rep. Joe Kennedy (D-Mass.) said he and Rep. Peter Welch (D-Vt.) introduced an amendment during the committee meeting to include mandates for substance abuse and mental-health coverage, but it was voted down along party lines.”

“President Trump has made combating the nation’s drug-overdose problem a focal point of his campaign and his presidency. “We will stop the drugs from pouring into our country and poisoning our youth,” he said in a speech before Congress last week, “and we will expand treatment for those who have become so badly addicted.” 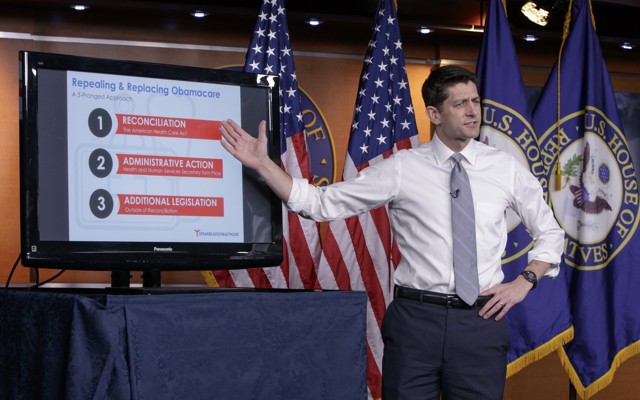 “Trump has endorsed the Republican plan to replace the ACA.”

“A record number of people — 33,000 — died of opiate overdoses in 2015, according to the Centers for Disease Control and Prevention. Opioids now kill more people than car accidents, and in 2015 the number of heroin deaths nationwide surpassed the number of deaths from gun-related homicides. Authorities are also grappling with an influx of powerful synthetic narcotics responsible for a sharp increase in overdoses and deaths over the past year.”

“The 15 counties with the highest death rates from opiate overdoses were in Kentucky and West Virginia, according to a group of public health researchers, writing in the New England Journal of Medicine. Both of those states expanded Medicaid. Taking away those benefits, they wrote, would affect tens of thousands of rural Americans “in the midst of an escalating epidemic.”

“Medicaid pays for 49.5 percent of medication-assisted treatment in Ohio, 44.7 percent in West Virginia and 44 percent in Kentucky when the drug buprenorphine, which is used to manage chronic opiate use disorder, is administered, according to Rebecca Farley, vice president of policy at the National Council for Behavioral Health.”

“Public health officials and advocates say there is a nationwide shortage of treatment programs to serve the growing problem of addiction and its effects, including diseases associated with long-term IV drug use such as hepatitis C and HIV.”

“Shawn Ryan, a doctor with Brightview Health in Cincinnati, which provides addiction treatment mainly to patients on Medicaid, said states are starting to increase drug addiction services to respond to rising needs, but the process could take years.”

“The outpatient addiction treatment services that are starting to ramp up . . . they could be crushed by this if not done in a way that specifically protects the most vulnerable populations,” he said.”

“Stripping away addiction treatment services from low-income people is especially harmful, Frank, of Harvard, said in an interview, because the prevalence of drug abuse is much higher for people living well below the poverty line. He said Medicaid recipients who are covered for addiction treatment and maintain their coverage through 2020 would not lose the benefit under the GOP proposal. But, he added, because addiction is a chronic-relapse disease, people may get clean, relapse, stop working and need to go back on Medicaid.”