The  federal Judge Derrick K. Watson in Hawaii has made a nationwide ruling on 3/15/17 to freeze our republican President Donald Trump’s updated travel ban designed to bar refugees from stepping on U.S. soil from the countries of Iran, Sudan, Somalia, Libya, Yemen and Syria.

“A federal judge in Hawaii has frozen President Trump’s new executive order temporarily barring the issuance of new visas to citizens of six-Muslim majority countries and suspending the admission of new refugees.”

“The hearing in Hawaii came in response to a lawsuit filed by the state itself. Lawyers for Hawaii alleged the new travel ban, much like the old, violates the establishment clause of the First Amendment because it is essentially a Muslim ban, hurts the ability of state businesses and universities to recruit top talent and damages the state’s robust tourism industry.”

“They pointed particularly to the case of Ismail Elshikh, the imam of the Muslim Association of Hawaii, whose mother-in-law’s application for an immigrant visa was still being processed. Under the new executive order, lawyers for Hawaii said, Elshikh feared that his mother-in-law would ultimately be banned from entering the United States.”

“Dr. Elshikh certainly has standing in this case. He, along with all of the Muslim residents in Hawaii face higher hurdles to see family because of religious faith,” lawyer Colleen Roh Sinzdak said at the hearing. “It is not merely a harm to the Muslim residents of the state of Hawaii, but also is a harm to the United State as a whole and is against the First Amendment itself.”

“Justice Department lawyers argued that the president was well within his authority to impose the ban, and that those challenging it had raised only speculative harms.”

“They bear the burden of showing irreparable harm … and there is no harm at all,” said Acting U.S. Solicitor General Jeffrey Wall, who argued on behalf of the government in Greenbelt, Md. in the morning and by phone in Hawaii in the afternoon.”

“The arguments were similar at the hearing in Maryland, where a federal judge peppered both sides with pointed questions about whether the revised executive order would harm Muslims, refugees and the organizations that serve them.”

“I think we’ve been going for quite a while,” U.S. District Judge Theodore D. Chuang said after the nearly two-hour hearing. “I appreciate everyone’s advocacy. . . . I’ll try to issue a written ruling — hopefully today, but not necessarily.”

“The president’s new executive order will suspend the U.S. refugee program for 120 days, halt for 90 days the issuance of new visas to people from six Muslim-majority countries and reduce the number of refugees allowed to enter the United States this year from 110,000 to 50,000.”

“The ACLU and lawyers for refugee aid organizations asked Chuang to halt the entire order, arguing that it is a pretext to discriminate against Muslims, who make up the majority of refugees admitted to the United States.

“If you were trying to ban Muslims,” ACLU lawyer Omar C. Jadwat told the Chuang in court, “banning refugees would be one compelling way to do it.”

“Justin Cox, a lawyer for the National Immigration Law Center who also argued in court, said refugees and immigrants feel that Trump’s order essentially targets Islam. “All of these individuals express that they feel that their religion has been condemned by the executive order,” he said.”

“Justice Department lawyers say the order is “substantially different” from Trump’s Jan. 27 travel ban, which stranded thousands of travelers overseas and ignited protests at airports and elsewhere before it was blocked by U.S. District Judge James L. Robart in Seattle. The Trump administration urged Chuang not to halt the order, saying its chief goal is to prevent terrorists from entering the country.”

‘The six countries named in the order, which are majority-Muslim, were selected because the administration of former President Barack Obama identified them as having security threats, Wall told the judge, adding: “What he’s concerned about are radical Islamic terrorists.”Wall said the plaintiffs in the legal challenge, who include individuals as well as refugee-aid agencies, would not suffer immediate harm from the order because it provides for waivers. Nor would the aid agencies suffer financially, he said, because they would have fewer refugees to serve, and therefore fewer expenses.”

“But the ACLU and other lawyers said the list of potential harms is long. Refugees already in the United States will remain separated from families living in dangerous conditions overseas, they said. Other refugees who had expected to come to the United States this fiscal year would not be allowed in. HIAS, the nation’s oldest refugee resettlement organization, said it would lose funding and would probably have to lay off employees because of the reduced refu­gee admissions. The organization used to be known as the Hebrew Immigrant Aid Society.”

“During the hearing, Chuang said it was unclear whether he could order the president to admit all refugees.”

“Near the end of the hearing, Chuang noted the polarization in the case, weighing the safety of refugees against Trump’s stated fears for security at home.”

“Chuang signaled that he could rule Wednesday, but lawyers for refu­gee rights groups said they are also looking to court hearings in Washington state and Hawaii for possible relief. Robart, who blocked Trump’s first order, was set to hear the case in Washington Wednesday.” “Trump’s first travel ban was a less-detailed directive that abruptly suspended the refugee program, halted travel for all citizens of seven majority-Muslim countries, including travelers who already had been issued visas, and lowered the cap on refu­gee arrivals.” “After parts of that order were frozen, Trump issued the new executive order, giving travelers 10 days’ notice and, government lawyers say, making several significant changes. The order removes Iraq from the list of banned countries, exempts visa and green-card holders, and allows excluded foreigners to apply for waivers to enter the United States.”

“The order still applies to people who want to come to the United States and are citizens of Iran, Sudan, Somalia, Libya, Yemen and Syria. The Department of Homeland Security said on its website that the six nations have been identified as “countries of concern due to the national security risks associated with their instability and the prevalence of terrorist fighters in their territories.”

“But the plaintiffs, led by the International Refugee Assistance Project, said in court filings that the government’s evidence about security threats was “implausibly thin.” They said the Somali refu­gee had lived in the United States since he was a toddler, and that any improved screening could not have predicted his crime. And they said the FBI’s claims about 300 investigations are “meaningless” without evidence.” 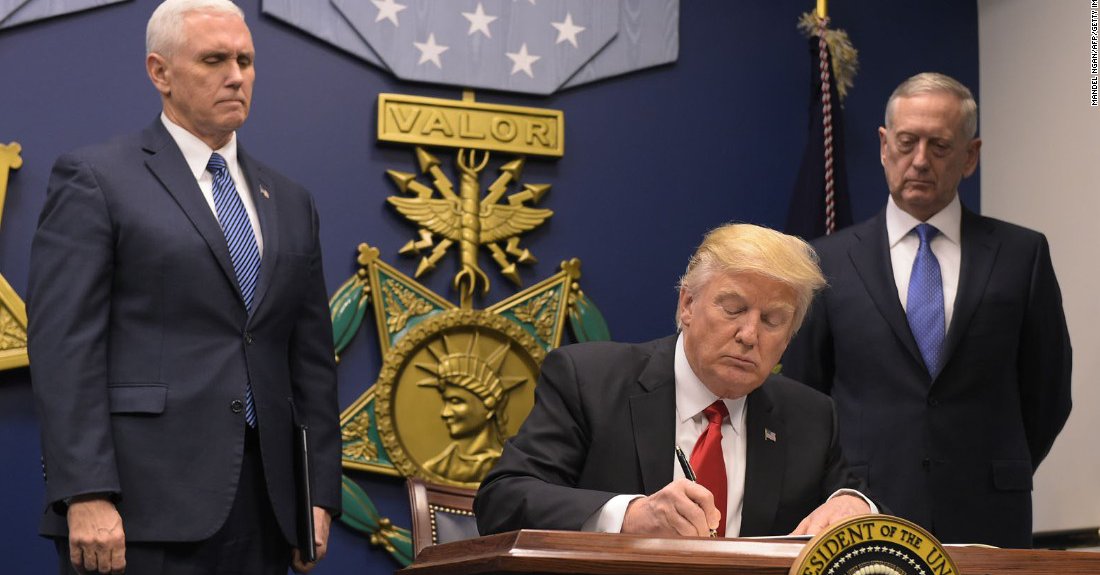 “The plaintiffs allege that the Trump administration has retooled its original executive order with the continued goal of discriminating against Muslims. They point to statements by Trump and some of his advisers during the presidential campaign and afterward that, they say, demonstrated an intent to bar Muslims from entering the United States.”

“While the revised order differs in some respects from the first, it is no less a reflection of discriminatory intent than the previous version,” they said in legal briefs filed March 10.”