aside Why Was Press Barred From Kushner Family’s Marketing Campaign In China?

Talk about the republican President Donald Trump’s family’s chutzpah when it comes to pushing the envelop regarding “conflict of interest” issues that are already haunting the White House due to the suspicion that the president’s family businesses are profiting from monies by foreign investors.

The latest story has to do with the president’s son-in-law Jared Kushner’s sister who is promoting a family owned property in New Jersey to investors in China, in return for the possibility of them being rewarded with US EB-5 visas, at a time when the president’s team is focused on deporting numerous undocumented workers.

It has been reported by Reuters, “Qiaowai’s Chinese-language marketing material describes the (NJ property) project as “supported by the government, created by a star developer”, and says the project is its 87th EB-5 program.”

As per the latest Lucid EB5 blog program updates:

“Over several hours of slide shows and presentations, representatives from the Kushner family business (headed by Nicole Kuster, sister to Jared Kushner) urged Chinese citizens gathered at a Ritz-Carlton hotel to consider investing hundreds of thousands of dollars in a New Jersey luxury apartment complex that would help them secure what’s known as an investor visa.”

“The potential investors were advised to invest sooner rather than later in case visa rules change under the Trump administration. “Invest early, and you will invest under the old rules,” one speaker said.”

The tagline on a brochure for the event: “Invest $500,000 and immigrate to the United States.”

At a recent marketing event similar to the above details, reporters were barred entry. Here is the rest of the story…

“Organizers barred journalists on Sunday from a publicly advertised event in Shanghai that offered Chinese investors the chance to get U.S. immigrant visas if they put money in a real estate project linked to the family of President Donald Trump’s son-in-law.”

“The two-tower luxury apartment complex in New Jersey, One Journal Square, is being developed by KABR Group and the Kushner Companies, which until recently was headed by senior White House advisor Jared Kushner, the husband of Trump’s daughter Ivanka.”

“The developers are seeking to raise $150 million, or 15.4 percent of funding for the project, from investors through the EB-5 visa program, according to marketing materials posted by the event’s organizer, immigration agency Qiaowai.”

“The controversial EB-5 program allows wealthy foreigners to, in effect, buy U.S. immigration visas for themselves and families by investing at least $500,000 in certain development projects.” “Sorry, this is a private event,” said a man stopping journalists from entering a function room at the Four Seasons Hotel in Shanghai.

Guests at the event said Kushner’s sister, Nicole Kushner Meyer, spoke for about 10 minutes, including about her family’s humble roots.

According to the New York Times, Meyer attended a similar event in Beijing on Saturday and told the audience of about 100 people the project “means a lot to me and my entire family”.

Jared Kushner, whose White House portfolio includes relations with China, sold his stake in Kushner Companies to a family trust early this year.

“Mr. Kushner has no involvement in the operation of Kushner Companies and divested his interests in the One Journal Square project by selling them to a family trust that he, his wife, and his children are not beneficiaries of, a mechanism suggested by the Office of Government Ethics,” his lawyer, Blake Roberts of WilmerHale law firm, said in a statement emailed to Reuters by the White House.

“As previously stated, he will recuse from particular matters concerning the EB-5 visa program.”

“The Times story said Meyer did not respond when asked if she was concerned about possible conflicts of interest facing her brother. Journalists from the Times and Washington Post were removed from Saturday’s Beijing event (5/6/17), the newspapers reported.” 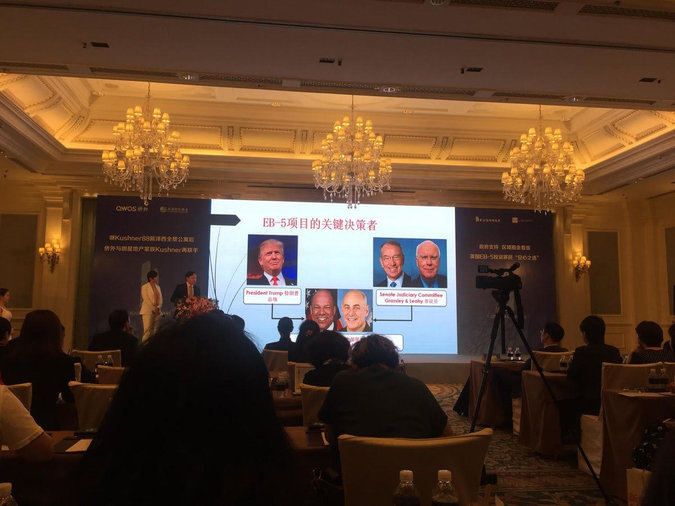 One potential investor, Sophie Xing, said a “very important” factor in her decision to attend Sunday’s event was the fact the project was a Kushner Companies investment and that Trump’s son-in-law’s sister would be in Shanghai.

“Actually I really don’t know how close they are but I felt that this was a pretty good project,” she said.

In a promotional text message seen by Reuters, Qiaowai made note of Meyer’s relationship to Trump and called her the event’s “heavyweight honored guest”.

Qiaowai representatives at the event declined to answer questions from journalists, and calls to its listed phone number went unanswered.

Qiaowai is also known as QWOS. Its promotional materials for the project, which it also calls Kushner1, advertise the prospect of putting money in under the federal EB-5 program.

The program is popular among wealthy Chinese looking to shift assets abroad or move overseas, but it has come under fire in the United States.

Some U.S. lawmakers have called for changing or abolishing the EB-5 program, but the scheme was recently renewed by Congress until Sept. 30.

Potential investor Xing said a Kushner representative who spoke on Sunday stressed that EB-5 rules could change after September to raise the minimum required investment.

Another person who attended Sunday’s event, Liu Guoqi, was mindful of the potential rule change. Liu said he had been to previous pitches for EB-5 investments but had concerns about the risks.”

“The whole thing may change later this year so we feel that there isn’t much time left,” he said.”

“In the United States, the EB-5 program has also sparked concerns about possible scams. Some immigrants have been burned by misrepresentations made about the program by promoters, both inside and outside the United States. Many have lost not only their money but their chance at winning U.S. citizenship.”

“Trump has vowed to clamp down on illegal immigration.”

“In addition to Beijing and Shanghai, the road show for One Journal Square was scheduled to visit the Chinese cities of Shenzhen, Guangzhou and Wuhan, according to Qiaowai’s marketing materials online.”

“It calls the Kushner family a “famous real estate clan”, and touts EB-5 immigration as “peace of mind.”

Qiaowai’s Chinese-language marketing material describes the project as “supported by the government, created by a star developer”, and says the project is its 87th EB-5 program.