aside Jared Kushner Is A White House Official Under FBI Scrutiny

The Washington Post is reporting that the republican President Donald Trump’ son-in-law and Senior Advisor, Jared Kushner is under scrutiny with the FBI. What this means according to various media sources is not clear. It could mean anything from Mr. Kushner has information about the Trump-Russian saga probe to him being the subject of  this FBI investigation. He was present at several meeting with Russian officials over a couple of years which he did not disclose on his forms to qualify for security clearance.

“Investigators are focusing on a series of meetings held by Jared Kushner, President Trump’s son-in-law and an influential White House adviser, as part of their probe into Russian meddling in the 2016 election and related matters, according to people familiar with the investigation.” 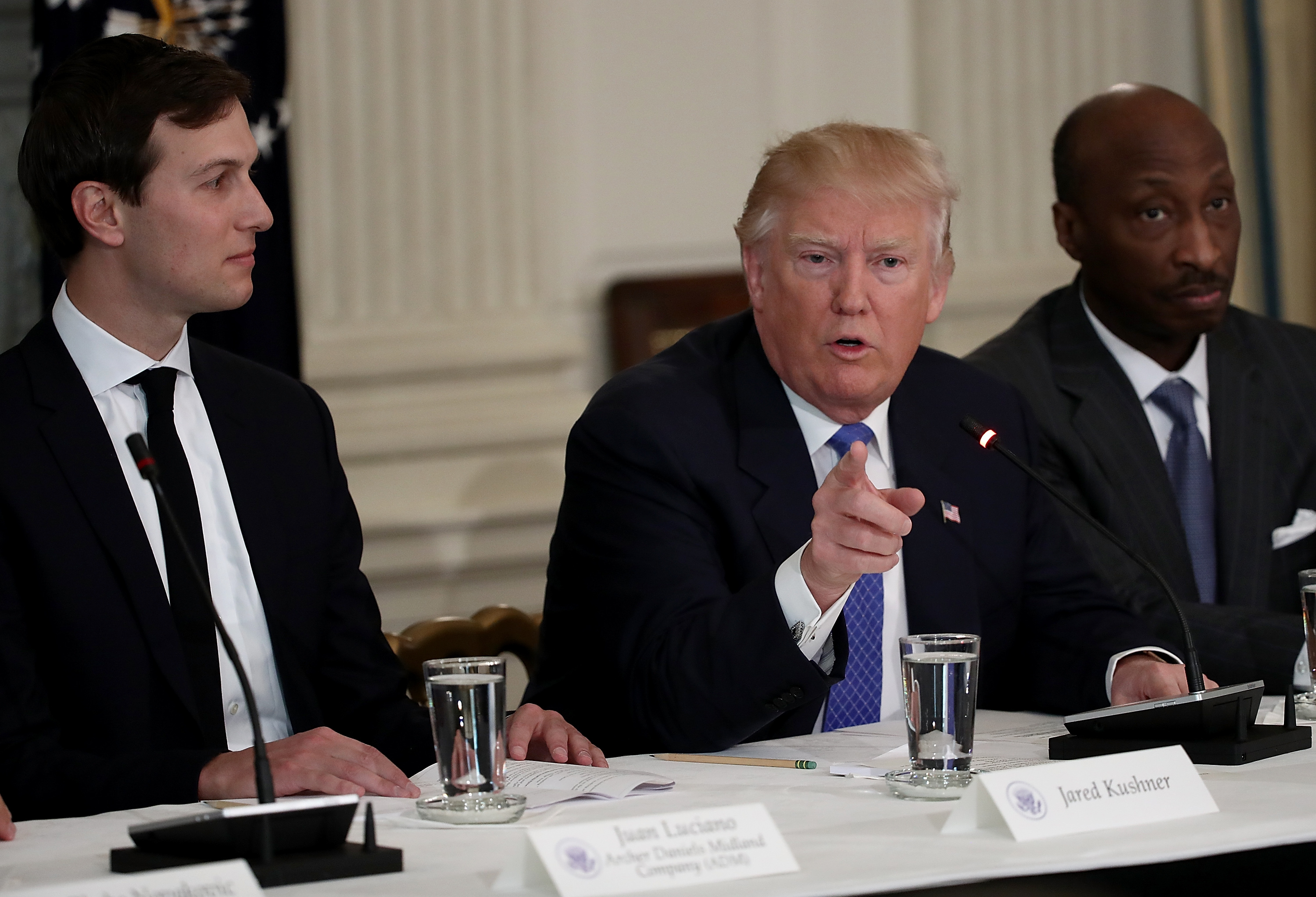 “Kushner, who held meetings in December (2016) with the Russian ambassador and a banker from Moscow , is being investigated because of the extent and nature of his interactions with the Russians, the people said.”

“The Washington Post reported last week that a senior White House official close to the president was a significant focus of the high-stakes investigation, though it did not name Kushner.”

“The Post has not been told that Kushner is a target — or the central focus — of the investigation, and he has not been accused of any wrongdoing.”

“Mr. Kushner previously volunteered to share with Congress what he knows about these meetings. He will do the same if he is contacted in connection with any other inquiry,” said Jamie Gorelick, one of his attorneys.”

“In addition to possible coordination between the Kremlin and the Trump campaign to influence the 2016 presidential election, investigators are also looking broadly into possible financial crimes — but the people familiar with the matter, who were not authorized to speak publicly, did not specify who or what was being examined.”

At the time of the December (2016) meetings, Trump already had won the election. Contacts between people on the transition team and foreign governments can be routine, but the meetings and phone calls with the Russians were not made public at the time.”

“In early December, Kushner met in New York with Russian ambassador Sergey Kislyak, and he later sent a deputy to meet with Kislyak again. Flynn was also present at the early December meeting, and later that month, Flynn held a call with Kislyak to discuss U.S.-imposed sanctions against Russia. Flynn initially mischaracterized the conversation even to the vice president — which ultimately prompted his ouster from the White House.

Kushner also met in December (2016) with Sergey Gorkov, the head of Vnesheconombank, which has been the subject of U.S. sanctions following Russia’s annexation of Crimea and its support of separatists in eastern Ukraine.In addition to the December meetings, a former senior intelligence official said FBI agents had been looking closely at earlier exchanges between Trump associates and the Russians dating back to the spring of 2016, including one at the Mayflower Hotel in Washington. Kushner and Kislyak — along with close Trump adviser and current Attorney General Jeff Sessions — were present at an April 2016 event at the Mayflower where then-candidate Trump promised in a speech to seek better relations with Russia. It is unclear whether Kushner and Kislyak interacted there.”

“The New York Times reported that Kushner omitted from security clearance forms his December meetings with Kislyak and Gorkov, though his lawyer said that was mere error and he told the FBI soon after that he would amend the forms. The White House said that his meetings were normal and inconsequential.”

“Kushner has agreed to discuss his Russian contacts with the Senate Intelligence Committee — which is conducting one of several investigations into Russian meddling in the 2016 election.”

“In many ways, Kushner is a unique figure inside the White House. He is arguably the president’s most trusted adviser, and he is also a close member of the president’s family. His list of policy responsibilities is vast— his foreign policy portfolio alone includes Canada and Mexico, China, and peace in the Middle East — yet he rarely speaks publicly about any of them.” 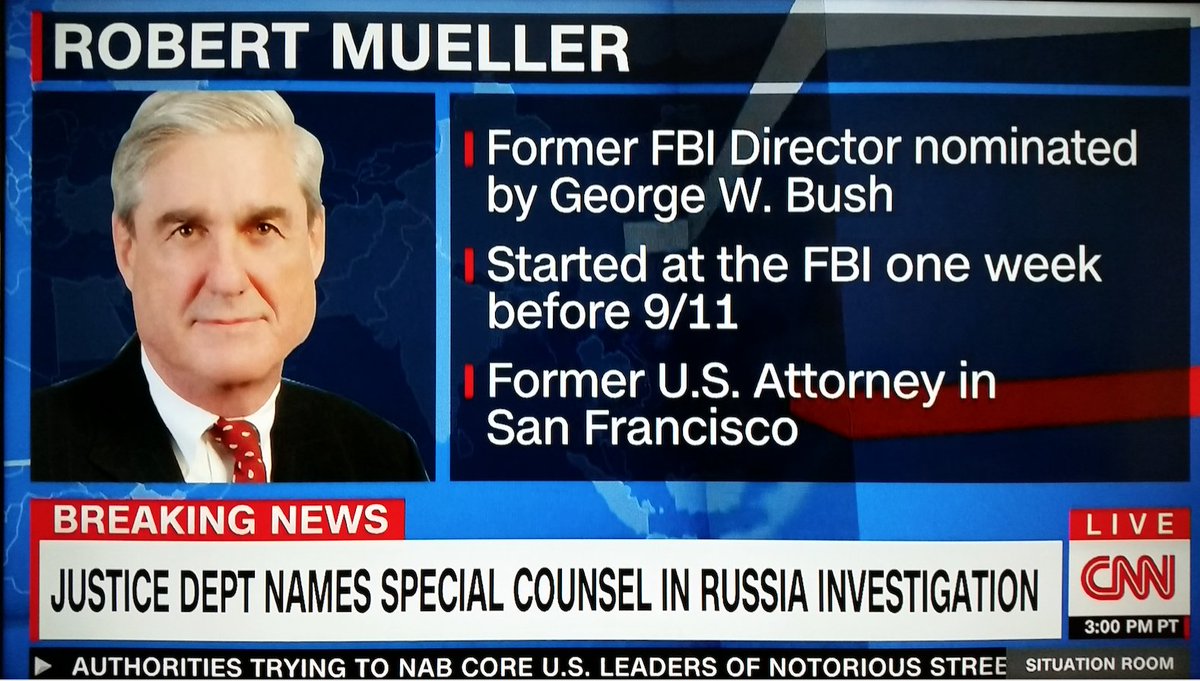 “Former FBI Director Robert S. Mueller III is now leading the probe into possible coordination between the Kremlin and the Trump campaign, and he has set up shop in the Patrick Henry Building in downtown D.C. Even before he was picked by Deputy Attorney General Rod J. Rosentein to take over the case, investigators had been stepping up their efforts — issuing subpoenas and looking to conduct interviews, people familiar with the matter said.”

“A small group of lawmakers known as the Gang of Eight was recently notified of the change in tempo and focus in the investigation at a classified briefing.”HIt is unclear exactly how Mueller’s leadership will affect the direction of the probe. This week, Justice Department ethics experts cleared him to take over the case even though lawyers at his former firm, WilmerHale, represent several people who could be caught up in the matter, including Kushner, Manafort and Trump’s daughter Ivanka, who is married to Kushner.”

“Mueller resigned from the firm to take over the investigation.”

“Investigators are continuing to look aggressively into the dealings of Flynn, and a grand jury in Alexandria, Va., recently issued a subpoenas for records related to Flynn’s businesses and finances, according to people familiar with the matter.”

“Flynn’s company, the Flynn Intel Group, was paid more than $500,000 by a company owned by a Turkish American businessman close to top Turkish officials for research on Fethullah Gulen, a cleric who Turkey’s current president believes was responsible for a coup attempt last summer. Flynn retroactively registered with the Justice Department in March as a paid foreign agent for Turkish interests.”

“Separately from the probe now run by Mueller, Flynn is being investigated by the Pentagon’s top watchdog for his foreign payments. Flynn also received $45,000 to appear in 2015 with Russian President Vladimir Putin at a dinner for RT, a Kremlin-controlled media organization.”