The horrific act on 5/26/17 by a White Supremacist’s brutal knife-stabbing attack against three brave men who came to the rescue of two young Muslim women on a Portland, Oregon train ride, was no less an act of terrorism than what the republican President Donald Trump has been warning Americans to be fearful of, from Muslim refugees seeking asylum in the USA.

There were two men killed in this hate-filled act of terrorism and a third man has been hospitalized due to knife wounds.

I WOULD EXPECT PRESIDENT TRUMP to speak out personally against this rising tide of Islamophobia and other forms of bigotry and racism in our country that he has callously provoked through his numerous statements and policies that have had a negative impact on minority communities. Frankly, his POTUS tweet is not an acceptable response.

As per the 5/29/17 Guardian report by Bonnie Malkin and Martin Pengelly, “After pressure mounted on Donald Trump to comment on the racist attack in Portland, Oregon that left two women dead on Friday 5/26/17), the president said on Monday (5/29/17) the attack was “unacceptable”.

Trump’s words were broadcast on the @POTUS Twitter account, rather than the more commonly used @RealDonaldTrump, on Monday morning, shortly before Trump marked Memorial Day with a speech at Arlington National Cemetery in Virginia.

“The violent attacks in Portland on Friday (5/26/17) are unacceptable,” the tweet read. “The victims were standing up to hate and intolerance. Our prayers are w/ them.” 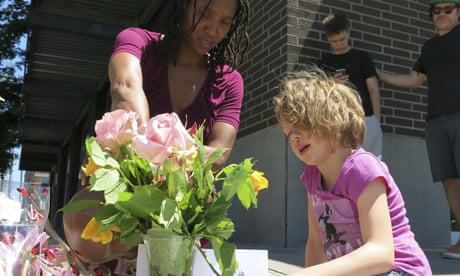 As per a 5/28/17 Quartz report by Selina Cheng, “Two men were killed this week while intervening in an apparently anti-Muslim attack in Portland, Oregon: Former US Army sergeant Rick Best, 53, and recent college grad Taliesin Myrddin Namkai-Meche, 23. Yesterday, about 1,000 people attended a vigil in their honor at the site of the attack.”

“A third victim, college student Micah David-Cole Fletcher, also tried to intervene and was also stabbed. He is recovering from surgery at a local hospital, the Oregonian reports.”

“He was a hero and will remain a hero on the other side of the veil,” wrote Asha Deliverance Namkai-Meche on Facebook. Her family also released a statement to the press: “In his final act of bravery, (Taliesin) held true to what he believed is the way forward.”

“Rick Best was a Portland city employee and a veteran who had served in Iraq and Afghanistan. “My heart goes out to the family of Rick Best,” writes Portland city commissioner Chloe Eudaly in a statement. “And as a veteran, he served our country with honor and distinction. He stood up for two young women and others he didn’t even know—all because he wanted to help.” 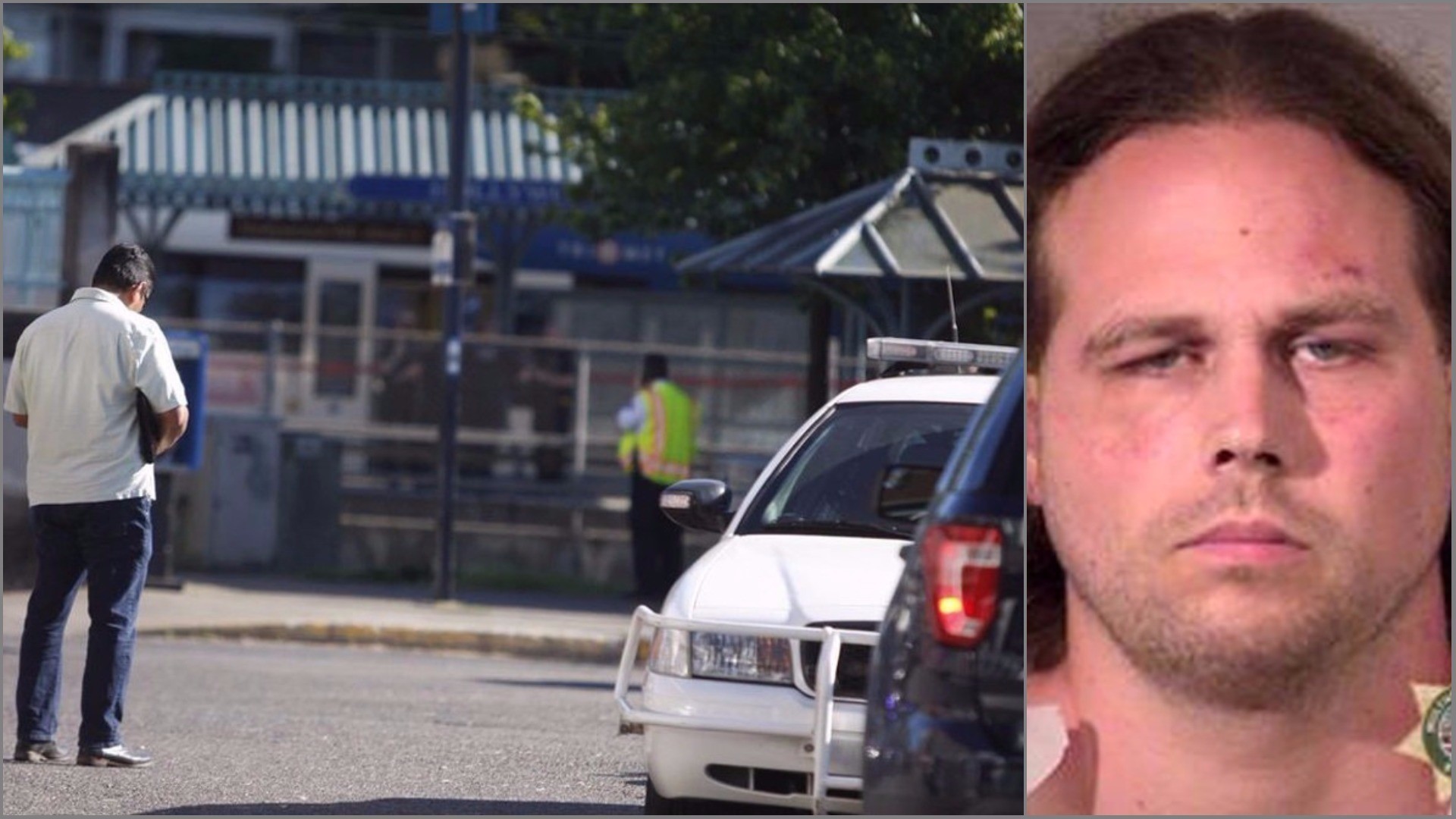 On 5/29/17, Thatcher Schmid of the LA Times penned the following report, “White supremacist arrested in fatal stabbing of two men after anti-Muslim rant in Portland.”

“A 35-year-old white supremacist with a criminal record has been arrested in connection with the stabbing deaths Friday of two men on a light-rail train in Portland, Ore., who intervened when he began to hurl anti-Muslim epithets at two women, one who was wearing a head scarf, police said.”

“Jeremy Joseph Christian of North Portland was jailed early Saturday on charges of aggravated murder, attempted murder, intimidation in the second degree and felony possession of a restricted weapon. He is being held without bail, and could face additional charges, police said.”

“The incident occurred on the Metropolitan Area Express light-rail line — known as MAX —during rush hour Friday. The two men who were killed appear to have stepped in to protect the women from racial slurs. One of the men was identified in a Facebook post by his mother as Taliesin Myrddin Namkai Meche, a recent graduate of Reed College.”

“Taliesin Myrddin Namkai Meche, My dear baby boy passed on yesterday while protecting two young Muslim girls from a racist man on the train in Portland,” the post said. “He was a hero and will remain a hero on the other side of the veil. Shining bright star I love you forever.”

Blackwood jumped off the train, he said, and faced a horrific scene.

“As I ran off the MAX, I seen two people bleeding out of their necks,” said Blackwood, 27, who was on his way home from work as a lunchtime cook at Portland City Grill. “Literally from the front to the back (of the car), there was blood everywhere. There was a man screaming, ‘Please, help my son, he needs a doctor!’”

“Portland police spokesman Sgt. Pete Simpson said that, according to witnesses, Christian used “hate speech or biased speech, about a variety of ethnicities or religions.”

“Witnesses describe his verbal behavior as wide-ranging in the ethnicities he was yelling about,” Simpson said. “I wouldn’t say he was just focused on one particular religion or ethnicity; I would say he was ranting about many things.”

“A Facebook profile that appears to belong to Christian contains neo-Nazi statements such as, “Yep. Im a nazi (sic)” “Hail Vinland” and “I will defend the Nazis.” The page is filled with vitriol including, “I want a job in Norway cutting off the heads of people that Circumcize (sic) Babies”) and shows Christian to have been a participant in right-wing rallies this year in Portland.”

“Imam Mikal Shabazz, director of the Oregon Islamic Chaplains Organization, said late Friday that Portland Police Chief Mike Marshman’s office made it clear to him they view the incident as a hate crime.”

“More than the fact that this individual was alleged to have made Islamophobic statements, when the chief’s office called, they did confirm that they’ve come to the conclusion that this is a hate-related crime, and they held off doing so until they had enough reason to say, ‘Yes, this is what it was,’” Shabazz said.”

“Certainly it’s not lost on us that this horrific act occurred on the beginning of Ramadan,” Simpson said. “While we don’t yet know the motivations behind the attack, what we do know is there was some hate speech used leading up to the attack, and that’s certainly very concerning.”

“Police are asking the public for help and hoping to obtain statements from other witnesses — starting with the two young Muslim women, one of whom reportedly was wearing a hijab.”

“There have been recent hate crimes in metro Portland, which has a larger white population than many large U.S. cities. Last year, 19-year-old Larnell Bruce, who was black, was runover and killed by an admitted white supremacist in a parking lot in Gresham, a suburb.”

“It’s just starting to reverberate out through the community what actually happened,” Shabazz said.

“Musse Olol, chairman of the Somali American Council of Oregon, got the news after leaving a meeting with police and Muslim leaders to talk about security during Ramadan. Normally, he said, he would spend the first hours of the holy month worshiping.”

“Instead, Friday night he was working the phones until the wee hours.”

“It’s the timing, that is what makes it very difficult,” Olol said. “It’s close to home. It’s too close for comfort. It’s worrisome.”

“In the face of the tragedy, Muslim leaders focused on the actions of the passengers who intervened.”

“Olol wept as he spoke of the two men who died.”

“Most of the imams I talked to wanted to know who were these good Samaritans,” he said. “These two guys are the heroes. The story should be about them, not the terrorist and the girls who happened to be in the wrong place at the wrong time.”

“Shabazz said, “What they did reminds us of the courage and the decency and the humanity that will rise above the hatred, the bigotry and all the other negative things that’s going across the board.”

“Shabazz and Olol said it was hard to gauge how the attack might affect Portland Muslims’ feelings of safety.”

“Blackwood, who posted a Facebook Live video of the incident, is credited as being among three passengers who pursued the assailant and alerted police.”

“Those people providing the 911 updates led officers to finding” the suspect, Simpson said.

“Blackwood said he didn’t think about it; he simply jumped into action.”

“I heard kids screaming. I heard a woman scream clear as day, ‘He’s stabbing people,’ and that’s when I jumped up and said, I’m gonna stop him,” Blackwood said.”

“Passengers described a suspect with no shirt, long hair and shorts. Blackwood spotted the man fleeing on a walkway above the platform, he said.”

“He began following, and at one point, Blackwood said, the man turned and pulled his knife, but didn’t attack. The three men kept an eye on the suspect as“he stopped in, like, a bus terminal area, and was washing blood off himself and putting a shirt on,” Blackwood said.”

“Then police showed up, and an officer trained an AR-15 rifle on the suspect. Blackwood said the suspect tried to commit “suicide by cop,” but police were able to apprehend him without incident.”

“He didn’t put down his knife, and he was saying, ‘Do it, just shoot me,’” Blackwood said. He described the suspect as “incredibly agitated” and possibly high on methamphetamine.”

“Blackwood’s voice broke as he spoke of the sacrifice of the two men who died.”

“I definitely feel the two gentlemen who stepped up, those two are heroes. They stepped up out of the sheer kindness of their hearts,” he said.”

“A makeshift memorial was placed for the victims at the Hollywood station, and a vigil was planned Saturday night.”

“We’d like to pass our condolences to the families of these two individuals who lost their lives,” Olol said.”