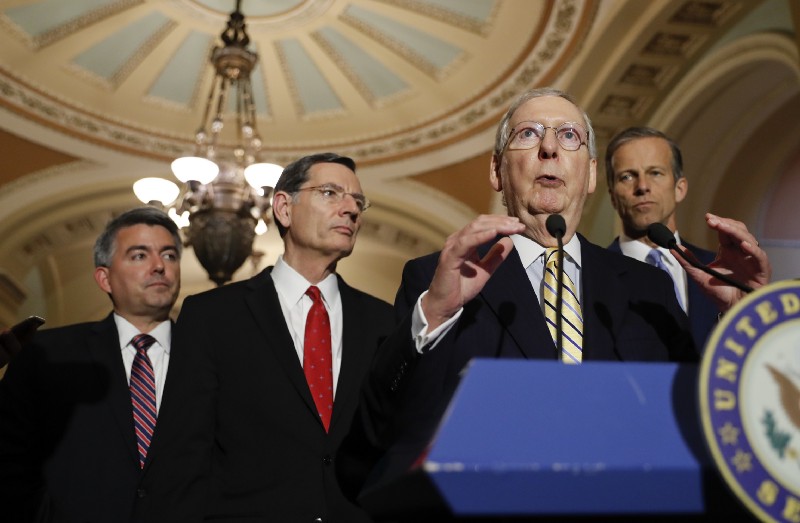 While the cat is away, the mice will play. As Americans were glued to the TV watching the former FBI Director James Comey testify on June 8, 2017 about the events leading up to his firing by the republican President Donald Trump on May 9, 2017, in order to curtail the Trump-Russian probe by the FBI, the republican senators were hard at work to fast track the A.H.C.A. healthcare bill previously passed by the House republicans.

It has become obvious to me that the US legislators have established an unholy alliance with President Trump. They will continue to prop him up as long as they are not impeded from passing legislation that benefits the wealthy to the tune of billions of dollars in tax savings even if it is at the expense of the hardworking average Joe folks who voted for the president in the hopes that their lives would be made better. These hard-hearted republican law-makers just have to lie to these voters about how they were really saving the failing system of Obamacare. UNDER SPECIAL RULES, the republicans are planning to pass the A.H.C.A. BILL IN SECRET BY THE END OF THE MONTH.

“Let the peasants eat cake,” should be the republicans’ motto.

“While many Americans make sense of James Comey’s testimony on his meetings with President Trump, Republican senators are quietly moving toward something that has been their party’s goal for nearly eight years: dismantling the Affordable Care Act. The question, of course, is how they plan to replace it.”

“Republicans in the Senate will need 50 votes to pass their version of the American Health Care Act. Several senators have expressed reservations about the House version of the bill, which withdraws federal support for Planned Parenthood and rolls back the Medicaid expansion accomplished by the A.C.A.. Despite the lack of consensus within the party, Senator Mitch McConnell, the majority leader, on Wednesday began the process of fast-tracking the bill under Rule 14, which enables the Senate to bypass the committee process and instead move the bill on to the Senate calendar for a vote as soon as it is ready.”

“This will allow the legislation to move much as it did in the House – swiftly and secretively. The Senate aims to vote by the end of the month, and will probably do so with no hearings. This stands in stark contrast to the process leading up to the passage of the Affordable Care Act, which included over 100 congressional hearings.”

“The A.H.C.A.’s fast-tracking is not driven by necessity, but rather by the concern that a more transparent legislative process would lay bare the reality that the bill, if passed, would cause millions of Americans to lose their health insurance and drive up costs for millions of others.”

“With only 20 percent of Americans supporting the A.H.C.A. (and only 8 percent believing the Senate should pass the House version of the bill), and support for Obamacare at an all-time high, Senate Republicans are in a bind. While abandoning the A.H.C.A. in favor of fixing Obamacare would reflect the will of the majority of the American people, it would require abandoning a central campaign pledge to the Republican base and result in an untenable reconciliation process with the more conservative House. But pursuit of a deeply unpopular policy that is likely to have disastrous health and economic consequences for millions could be far costlier as the Republicans face the possibility of a stinging defeat in 2018.”

“With much public attention currently diverted to the investigation into the Trump campaign’s ties to Russia, Republicans may feel that now is the right time to move on health care. But just as town halls and phone calls conveyed to many House members deep concerns about the A.H.C.A., ordinary Americans can now demand to see the text of the legislation and tell their senators how a loss of insurance coverage would affect them. Though some relatively centrist senators including Dean Heller of Nevada recently warmed to the phase-out of Medicaid expansion over the next seven years, others like Susan Collins of Maine, Lisa Murkowski of Alaska and Bill Cassidy of Louisiana may be receptive to concerns about the future of Medicaid and protections for those with preexisting conditions.”

“It would be myopic and reckless for Republicans to advance legislation that harms millions for the short-term gain of a legislative victory.”

“After all, voters may not properly attribute policy gains like the Medicaid expansion to the legislation that President Obama championed, but they will remember who took their health care away.”