Around June 14, 2017, Londoners again find themselves in a state of shock, grief and anger because of a fire that quickly spread in the Grenfell apartments which has claimed the lives of  (58) residents with many being in critical condition. What is so difficult to believe is that this tower had been under-going renovations to where fire safeguards had been temporarily removed. In addition those exposed to these conditions were advised to stay put.

I am certain that there will be a demand by the locals for a full fledged investigation as to how this tragedy was not better prevented or where the harm was not better mitigated.

To those across the pond, we grieve with you as we send our condolences your way.

Here’s how the 6/14/17 Reuters report describes the apartment:

“It originally contained 120 apartments, though seven more were added in refurbishment.”

“A 8.7 million pound ($11 million) refurbishment of the block was carried out by construction company Rydon and completed in July 2016. It included new external cladding, replacement windows and curtain wall facades, according to Rydon’s website.”

“A new communal heating system and a bespoke smoke extraction and ventilation system were also installed.”

“Rydon said it was shocked to hear of the devastating fire and its immediate thoughts were with those affected.”

“The company said its refurbishment of the building met all required building control, fire regulation and health & safety standards.”

“We will cooperate with the relevant authorities and emergency services and fully support their enquiries into the causes of this fire at the appropriate time,” the company said in a statement.”

The cladding work was carried out by Harley Facades in a contract valued at 2.6 million pounds, according to its website.

Here are snippets provided by the Guardian regarding this devastation…

“Fire safeguards in Grenfell were temporarily removed during the refurbishment, according to the trade journal Inside Housing.”

“Safeguards intended to prevent the spread of fire from floor to floor were temporarily removed from Grenfell Tower during a refurbishment, according to documents from the planning application.”

“The 2016 refurbishment involved replacing heating pipes which require removing ‘fire stopping’ systems, it said. Their plan was to replace these, but it is unclear whether this took place. The contractors insisted that the refurbishment complied with fire and health and safety rules.”

“A man seen waving from one of the upper floors at about 7am is believed to have been rescued.”

“ITV showed live footage of the man on Good Morning Britain, hours after the fire broke out. It later reported that he had been rescued.”

“Two workers with the charity Muslim Aid were delivering donations collected from members of the Al-Manaar mosque in Acklam Road.”

“We’re also trying to arrange short-term housing and financial assistance,” said Ahmad Teladia. “We’ve got too much stuff, now the best thing for people to give is money.”

“His colleague Nosheena Javaid said there were a lot of Muslim residents of Grenfell Tower. “Muslims are fasting because of Ramadan, but we are trying to reassure people from Grenfell Tower that it’s okay for them not to fast in the circumstances, they will get exemptions from their imam. 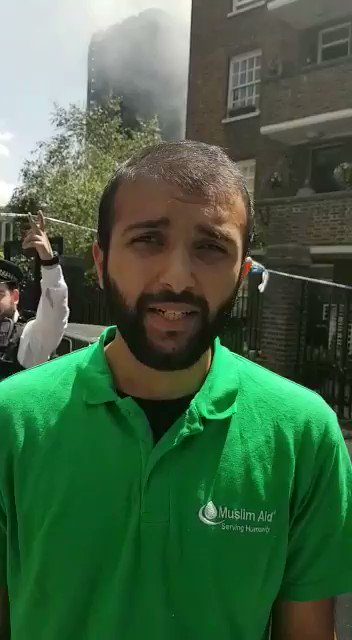 Manchester-based housing association Irwell Valley has written to its tenants to try to reassure them in the wake of the Grenfell Tower fire.

It points out that its tower blocks are compliant with fire safety legislation but don’t have firm alarm systems. It will be arranging meetings for residents concerned about safety.

The “stay put” policy (see earlier) has been a cornerstone of fire safety advice for housing blocks such as Grenfell Tower since the 1950s.

The official guidance states that residents should only evacuate if their own flat is on fire – everyone else, generally, is thought safe to remain.

But that policy is expected to come under intense scrutiny after what fire industry experts called an “unprecedented” inferno that has so far claimed six lives, with the death toll expected to rise.

Darren Baird, a former senior fire safety officer with the Greater Manchester fire service and the managing director of Total Fire Services, said he expected the stay put policy to be reviewed for council blocks that have undergone major refurbishment work, like Grenfell Tower.

“I’ve been to hundreds of tower block fires and every one has been contained in the flat of origin. It very, very rarely spreads beyond even the room of origin,” he said.

“Our general advice would be that unless the fire is in your flat, stay put. Unless you’ve had refurbishment work that you’re unsure of, stay put. It’s been inherent and built into buildings and tower block designs since the 1950s.”

“The stay put advice was reviewed following the Lakanal House fire, in south London, in which three women and three children died in July 2009.”

“The fire service was criticised at an inquest into the Lakanal House blaze for its lack of consistency in telling residents to stay put or get out, but a review of the policy determined that it should not be altered.”

“Baird, who advises seven major housing groups on fire safety, said the principles of the policy are based on flats that contain a fire for at least 60 minutes, sometimes up to three hours, before the fire service arrives.”

“However, he said this “60-minute box” principle goes out of the window if major refurbishment works have introduced defects.”

“If it’s your flat that’s on fire you evacuate, if it’s not your flat then you’re ‘normally’ safe to remain where you are,” he said. “The thing that conflicts with that is if there’s been some refurbishment work done and that has altered that compartmentalization.” 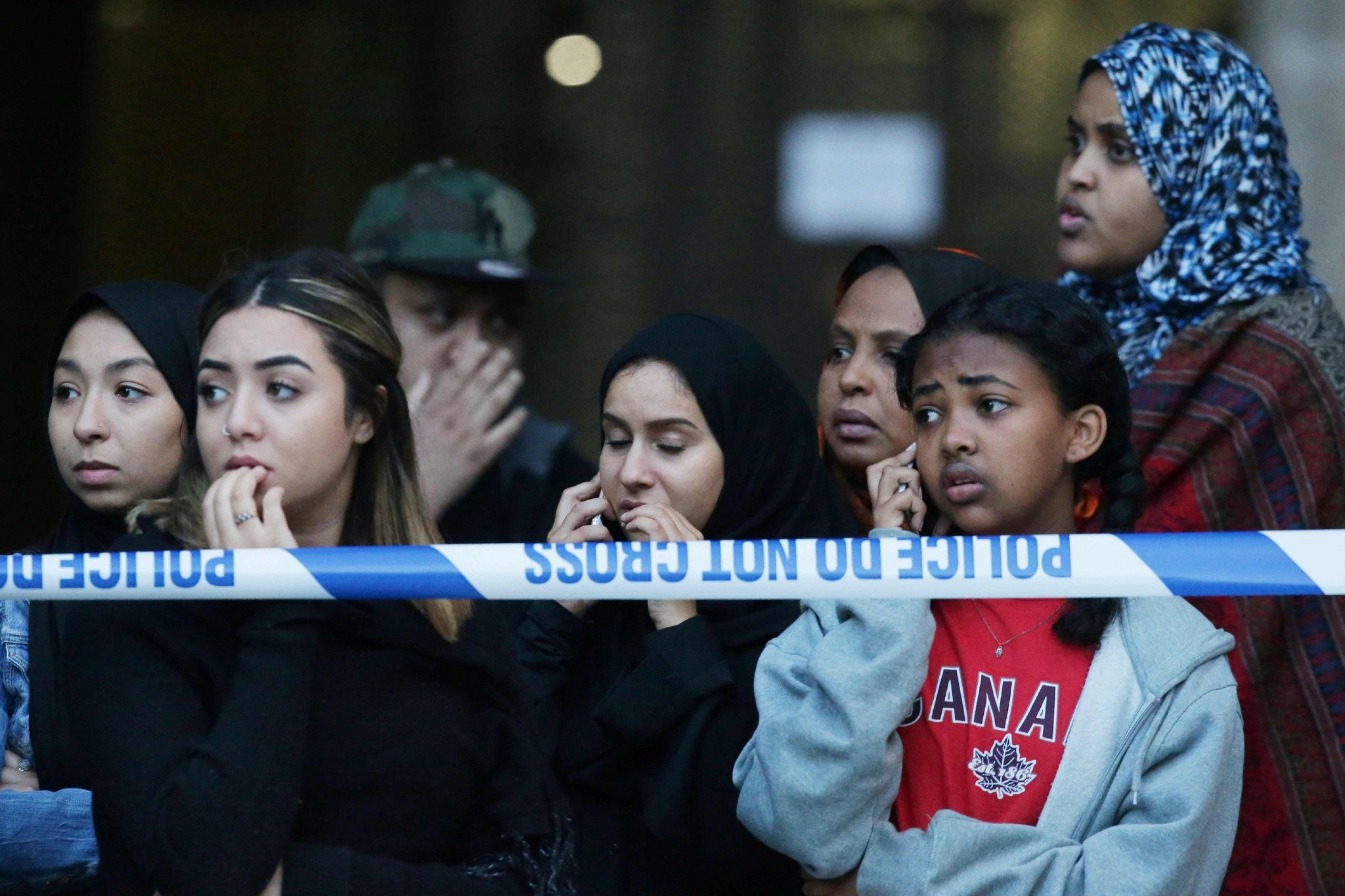 “Baird said the major refurbishment of Grenfell Tower may have left the building “like swiss cheese”, full of holes that would accelerate the spread of the blaze.”

“There’s evidence that the floors may have been reconfigured, heating systems may have gone in and external cladding has been fitted – that changes the parameters [of the advice to stay put],” he said.”

“Residents in Grenfell Tower were repeatedly reassured about fire safety by their landlord, according to local councillor Judith Blakeman.”

“She told the Press Association that residents had expressed concerns about fire safety in the block “over several years” and had constantly been reassured by Kensington and Chelsea Tenant Management Organisation (KCTMO).”

“Blakeman said: “The residents have expressed concern over several years about the fire safety at the block and they’ve constantly been reassured, ‘No, it’s OK, your flat is secure for an hour unless you’re close to the fire. Stay in your flat and you’ll be rescued within the hour by the fire brigade.’

“Obviously I’ve raised these issues about Grenfell Tower at the board as well. It’s all, ‘Don’t worry, it’s OK.’

“Blakeman said KCTMO told her both its health and safety officers and the fire brigade had inspected the building and that everyone was “quite happy”.

“Firefighters in their gear at the scene said they could not speak freely but they had been in the fire, rescuing residents. Some had used up four oxygen canisters, known as BA (breathing apparatus), going in and out of the flames. Cuts to the fire service had taken a serious toll on operations, they said.”

“Put it this way, you’re meant to work on a fire for a maximum of four hours, we’ve been here for 12. Hopefully we’ll get home at some point before we have to come back tonight.

“One firefighter said he’d never seen a fire like it.”

“And I hope I never do again. It would be unlucky to see this twice. Surreal.”