aside Senator Kamala Harris Appears To Make The Old Boys’ Network In The Senate, Nervous

There is not a woman alive who has ever held any executive type position who has not experienced this phenomenon of being interrupted, talked over by male co-workers while she was simply doing her job. There are literally hundreds of published articles out there in the real world, advising women how to navigate successfully under these set of circumstances.

There have been credible studies which validate this assertion. For example the Harvard Business Review has published empirical data in its review dated 4/11/17, demonstrating that the Supreme Court female Justices are interrupted by their male counterparts at a rate of 3 times greater than their male colleagues.

Most women who have been watching the US Senate Intel Committee hearings within the first half of 2017, have noticed the former prosecutor, former attorney general and freshman Senator Kamala Harris (D-CA), as she performs her expected role in a professional manner, by asking legitimate questions of the person testifying before her, being interrupted and talked over by her male counterparts whenever it is her turn to do her job.

Having been on this planet for almost 70 years, I would NOT have expected to observe this not so subtle bullying behavior on full display as what I have observed from her senate male counterparts as when one of their own pounces on Senator Harris, at each and every time. she has been up at the batting mound.

This mistreatment of Senator Harris helps to inform my opinion, that this is just one more detail proving that the US Senate Intel Committee republican members are not conducting a serious, non partisan investigation regarding the Trump-Russia saga. While she asked hard driving questions in a professional and reasonable manner from subjects who were being evasive, her republican colleagues looked like weenies in comparison. Another clue that these republican senators are just going through the motions is that they have not subpoenaed the president’s IRS tax forms which is what any well managed inquiry would have ordered at the start.

“We the people” will just have to keep pushing for a 9/11 type of independent investigative body to guarantee that whatever the truth is regarding this Trump Russian probe, will be uncovered and made public.

On June 15, 2017 Roxanne Jones of CNN Opinion “Kamala Harris is every woman who stands up to speak.”

“Educated, experienced and ready to rumble, the senator from California will not be silenced, especially when it comes to getting at the truth in the Russian investigation hanging over Donald Trump’s administration, though that is exactly what her male colleagues want to do: silence her.”
“Again and again during the Senate intelligence committee hearings into Russian interference in the 2016 elections, Harris, who is of black and Indian descent, has been reprimanded by her all-white male colleagues for simply doing her job: asking direct questions and expecting direct answers in return. “
“By her colleagues and by pundits, she’s been called too tough, too rude, even hysterical by one former Trump campaign adviser. The only senator to be cut off for asking tough questions in these hearings has been Harris, once last week while questioning Deputy Attorney General Rod Rosenstein and then again Tuesday when Attorney General Jeff Sessions was testifying.” 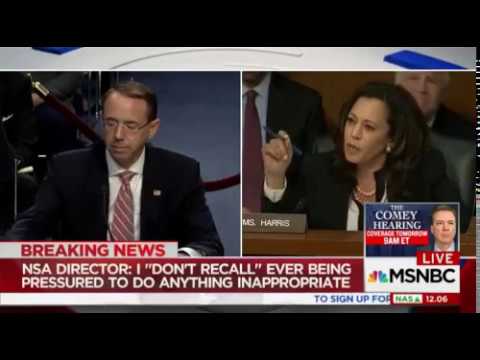 “This reaction to Harris is a double standard. An ugly intimidation tactic applied to working women that should not be tolerated. Not today. Because let’s be clear, what really appears to rankle these men is Harris’ courage, her confidence in her own skin. She is a woman of color who is not afraid to challenge the status quo. It’s for the good of the nation that she refuses to be silent.”
“Harris’ questions, though persistent, have never crossed the line of being rude or disrespectful. She doesn’t raise her voice or throw around accusations or insults.
Not a peep of reproach was heard from men on the committee as her colleague and fellow Democrat, Sen. Ron Wyden, accused Sessions of “stonewalling.” Other senators also got into tense exchanges.”
“Senators, this is unacceptable.”
‘Something tells me that Harris, who served two terms as San Francisco’s first female district attorney and then was the first woman elected as California attorney general, has been through this before, maybe her entire career.”
“I know that I certainly have, and frankly it’s gotten a little boring. This old “boys club” strategy is familiar: the blatant disrespect and machismo that singles out women, especially intelligent women of color, who insist on being a part of the conversation.”

Sen. Kamala Harris: Not backing down is in ex-prosecutor’s DNA
“Kamala Harris is every working woman who has ever earned a position of power and has not been afraid to use it. She is an inspiration. The way she approaches her career reminds us women that we need not carry the weight of men who have not learned to see us as equals. We cannot allow them to hold us back, or silence us into self-doubt.”
“For me, Harris represents every woman who’s ever decided to stand up and be heard, no matter how large or small our platform. She is Sen. Maxine Waters and Michelle Obama. She is Arianna Huffington and Hillary Clinton. She is me. And she is you.”
“Many Americans watching the Senate hearings this week related to Harris’ frustrations as Sessions continuously refused to give direct answers. She, like others on the committee, were weary of Sessions’ repeated non-answers of “I don’t recall,” or, “I don’t remember.” Harris wanted a “yes” or “no” answer.”

“Seemingly, less concerned with getting a firm answer than they were with rescuing Sessions, Sens. John McCain (who isn’t even on the Senate intelligence committee) and Richard Burr, committee chairman, cut off Harris’ questioning.”
“Russia interfering with a US election can’t be tolerated.”
“The possibility that political operatives may have colluded with a foreign government, in any way, must be investigated.” “And, any possibility that the President of the United States or any of his operatives tried to obstruct justice must be investigated to the fullest extent of the law, no matter how many tough questions it takes to get to the truth.”
“Americans want answers. We want to believe the truth still matters in politics. Kamala Harris is a refreshing, truth-seeking voice.”
“So senators, step aside, stop interrupting and let the woman do her job.”
Related Article:
How to Handle Interrupting Colleagues – Harvard Business Review https://hbr.org/2017/02/how-to-handle-interrupting-colleagues
Feb 22, 2017