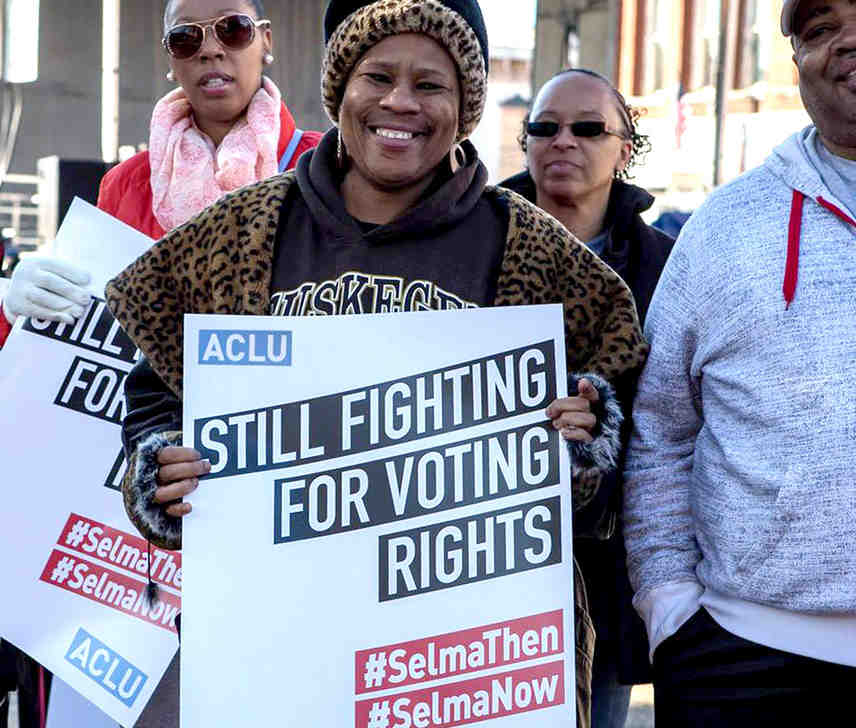 “We the people” demand the assurance that our right to vote is not hampered by foreign government entities. Today, the former head Jeh Johnson of the Department Of Homeland Security testified before a US Congressional Intel Committee shared information that at least 21 US states elections’ data were successfully hacked by Russian hackers.

“We the voters” have a right to easy access to the ballot box. The data shared by Mr. Johnson was that states’s registration sites were hacked for nefarious purposes by countries like Russia which hypothetically could alter my personal details to where I could be blocked from voting. Because some voting machines are tied to the internet, Mr. Johnson concurred that malware could be inserted to effect election outcomes.

Is it too much for “we the people” to expect these voting systems not to be prone to external manipulations, as a separate issue from how our republican President Donald Trump’s ego might be damaged by addressing this head on, because he does not want the Russia issue to diminish the fact of his 2016 presidential win.

“Samuel Liles, the Department of Homeland Security’s acting director of the Office of Intelligence and Analysis Cyber Division, said vote tallying mechanisms were unaffected, and the hackers appeared to be scanning for vulnerabilities — which Liles likened to walking down the street and looking at homes to see who might be inside.”

“But hackers successfully exploited a “small number” of networks, Liles said, likening the act to making it through a home’s front door.”

“Liles was testifying before the Senate Intelligence Committee, which is investigating Russia’s efforts to meddle in the 2016 presidential election, and his remarks add some clarity to the breadth of the Kremlin’s cyber mischief. Officials in Arizona and Illinois had previously confirmed that hackers targeted their voter registration system, though news reports suggested the Russian effort was much broader.”

Former “Homeland Security secretary Jeh Johnson outlined how Russian interference in the election did not affect voting machine tallies, but could have affected the election in other ways, during a House Intelligence Committee hearing on June 21 at the Capitol. (Reuters)”

“In a separate hearing before the House Intelligence Committee Tuesday, former Department of Homeland Security Secretary Jeh Johnson testified that Russia’s meddling was “unprecedented, the scale and the scope of what we saw them doing.” The testimony came a day after White House press secretary Sean Spicer said at a briefing he did not know whether President Trump believes Russia interfered in the 2016 presidential election.”

“In retrospect, it would have been easy for me to say I should have brought a sleeping bag and camped out in front of the DNC, late summer,” Johnson testified. He said the severity of Russia’s efforts convinced him to sign onto an Oct. 7 statement publicly blaming the Kremlin for what had happened, even though doing so might be perceived as “taking sides” or “challenging the integrity of the election itself.”My view is that we needed to do it and we needed to do it well before the election to inform American voters of what we saw,” Johnson said. He added: “I think the larger issue is it did not get the public attention that it should have, because the same day the press was focused on the release of the Access Hollywood video.” That video showed Trump bragging about kissing and groping women.”

“Officials declined to say which 21 states were targeted, or identify those which actually had data — such as voter registration lists — removed from their systems. Jeanette Manfra, the acting deputy undersecretary for cybersecurity and communications, said she could not do so because it was important to protect the confidentiality of those victimized.”

“FBI Assistant Director of Counterintelligence Bill Priestap testified Wednesday that Russians also pushed false news reports and propaganda online, using amplifiers to spread their message. He said Russia has for years tried to influence U.S. elections, but the “scale” and “aggressiveness” of its efforts in 2016 made the attempts more significant.”

“The Internet has allowed Russia to do so much more today than they’ve ever been able to do in the past,” Priestap said. He said Russia’s goal was to “sow discord” in the US and to “denigrate” Clinton and help Trump.””Johnson suggested that in the aftermath of the hacking, the federal government should “encourage a uniform set of minimum standards for cyber-security when it comes to state elections system and voter registration databases.”

“But he acknowledged doing so might be a heavy lift, given that state election officials are naturally suspicious of what he called a “federal takeover” of their election practices.”

“State election officials are very sensitive about what they perceive to be federal intrusion into their process,” Johnson said, noting that he often encountered officials pushing back and arguing that “it’s our process, our responsibility.”

And in 15 states there are and have been electronic voting machines where there is no paper trail which means, a recount is not possible.

The Homeland Security Head, Mr. Johnson stated at the 6/21/17 US congressional hearing that he had contacted all states which were vulnerable to outside interference according to the most current intelligence data he had in real time, to offer assistance, but 17 turned him down outright. He would not name these states but I would like to know if the states of Pennsylvania, Michigan, Wisconsin, Ohio and Georgia were on his contact list.

As per NBC news, “A decade ago, a group of citizens in Pennsylvania sued the state over its electronic voting machines, arguing the lack of a paper trail made hand recounts impossible, which could leave the outcome of an election in doubt.”

“After nine years of hearings and appeals, they lost the case. And when Pennsylvanians go to the polls to elect a new president, more than 80 percent of them will be using machines that don’t have a paper-backed audit.”

IN CONCLUSION AND IN LIGHT OF NEWS THAT RUSSIA STILL PLANS TO ATTACK OUR VOTING SYSTEMS IN THE FUTURE, THIS ISSUE NEEDS TO BE RE-LITIGATED.