IT’S TIME TO TAKE A BREAK FROM DIVISIVE POLITICS.  HAPPY 4TH OF JULY TO ALL MY READERS!

While this is a day set aside for celebrating the USA and its peoples, it is also a day of remembrance for all those who came before us and did their part to make this country what it is today.

The Fourth of July—also known as Independence Day or July 4th—has been designated a federal holiday in the USA since 1941, but according to History.com, “the tradition of its celebrations goes back to the 18th century and the American Revolution.”

“On July 2nd, 1776, the Continental Congress voted in favor of independence, and two days later delegates from the 13 colonies adopted the Declaration of Independence, a historic document drafted by Thomas Jefferson. From 1776 to the present day, July 4th has been celebrated as the birth of American independence, with festivities ranging from fireworks, parades and concerts to more casual family gatherings and barbecues.”

There are many of us non- Trump’s voters who are understandably down in the dumps, as we witness the republican President Donald Trump’s administration attack the very institutions and policies which made this country “the shinning light on a hill,” like the free press and an independent, non partisan federal law enforcement and judicial system.

Since, the inception of this country, slavery and racism has been a curse and a scourge on its soul. While the visible trappings of slavery against our Black brothers and sisters have been removed, the insidious tentacles of racism persist. Many have fought hard over the years, to eradicate the virulent strain of fear and hate for others who are a part of the myriad of minority communities in our midst, but now the president has been flaming these worst impulses felt by some of our citizens, causing a divide and a decline in civility and good will amongst all of us, exacerbated by an increase in fear and distrust. This is so unfortunate because in the end, we are all just Americans who want what is best for this country.

So, no matter, what your plans are for the 4th of July, please remember that this country has been based on the concept of”we the people” having the power of self- determination where together, we can direct this country towards continued positive growth and a tolerance for all.  But we have to be diligent in standing up against those in power who are intent in harming the very strengths that make this country great and which too many have fought for and sacrificed to maintain. After all, we are a democratic experiment in progress with decent can-do peoples of goodwill, looking forward towards to a better future for all of us and not settling for the president’s current plans to turn this country backwards in time, a fantasy of the past, and a time of deep divisions.

At the last minute, I and a friend decided on a low key way to celebrate this holiday by taking about an hour’s drive from Tampa, Florida to (downtown Disney) Disney Springs. We do not discuss politics as both of us have opposing belief systems.

We did what the locals do. We parked in this area while we spent about a couple hours cruising the shops along a designated pedestrian only walking area next to Lake Buena Vista. The heat was so oppressive that we spent most of our time in shops.

In this area, there are quite a few restaurants. For us it was a toss up between a popular hot dog stand, Wetzel’s Pretzels and an upscale Irish Pub with live entertainment starting around 4:00 pm.

A popular site in Disney Springs is Legoland where there are gargantuan structures put together with legos such as the dragon on the water and Disney charaters.

Floridians typically prefer to avoid the theme parks during the summer months because of the heat and huge crowds.

And so later, like many of the locals, we boarded a bus from Disney Springs to one of the hotel locations where folks can observe the fantastic Disney fireworks. There are three major hotels were many can gather to watch the spectacular 4th of July Disney fireworks show, the Contemporary, the Grand Floridian and the Polynesian.

We exited at one of the premier Disney resorts, the Grand Floridian, the fantasy destination for weddings, honeymoons and reality TV shows about weddings.

While we perused the grounds, we took cover under the awning surrounding the wedding chapel as the standard afternoon showers were in progress. This was great because the air became cooler. 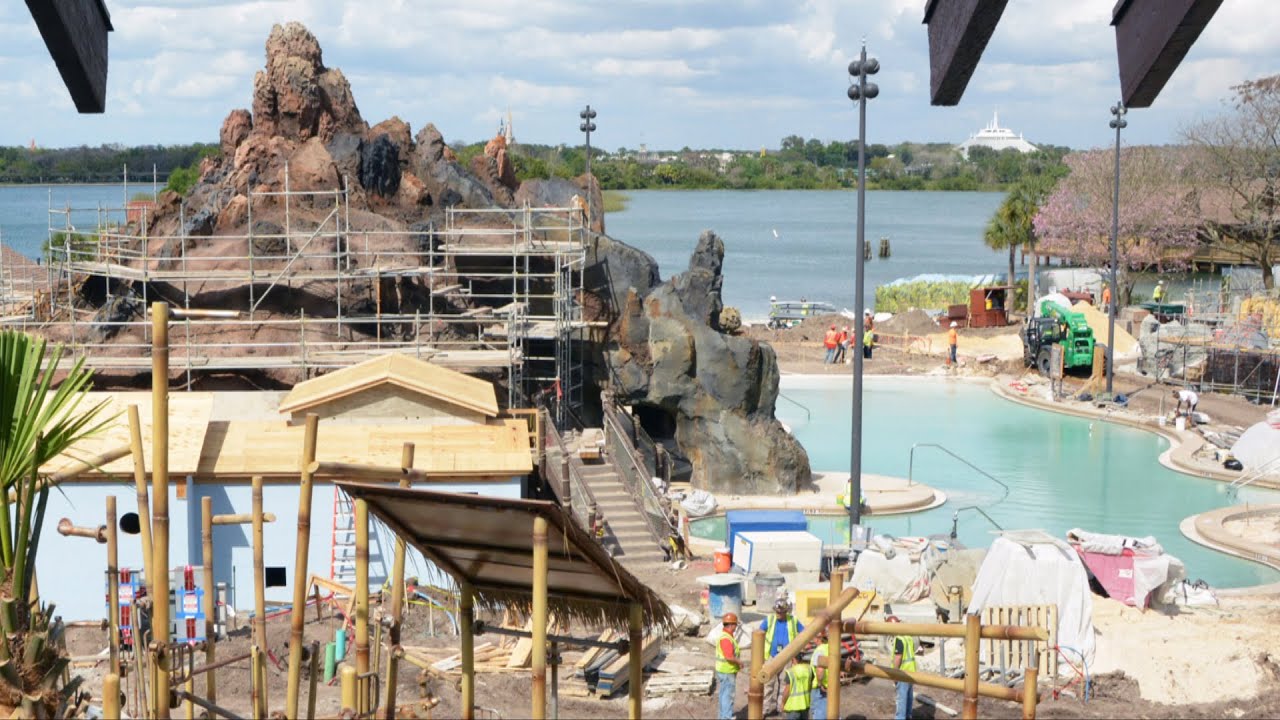 The very popular Polynesian Village Resort feast at O’Hana’s was very tempting to us, but we settled for a snack and a couple of very delicious drinks before heading out to beach area in the back of the resort where there was a DJ, music, dancing and other fun events. We were fortunate enough (miracle category) to be provided two lounge chairs where we could sit back to observe the unfolding festivities while waiting to watch the Magic Kingdom fireworks from a great vantage viewing point.

We remained at the Polynesian Village Resort for a short time to do some last minute Disney shopping and to allow time for the crowds to clear out a little. From here, we boarded a bus to return back to Disney Springs where we picked up my parked car for the trek back to Tampa.