The “Grass Roots,” those who are part of the resistance OF “WE THE PEOPLE” have A MAJOR VICTORY. Two more brave republicans have declared that they intend to vote “NO” against moving the latest BCRA healthcare act to where debate can begin on the floor. This just means that “we the people” have a temporary reprieve as the US Senate is too determined to pass this bill.

“Two more Senate Republicans have declared their opposition to the latest effort to overhaul the nation’s health-care system, leaving the measure without sufficient support to pass and potentially ending a months-long effort to make good on a longstanding GOP campaign promise.”

Two more Senate Republicans oppose health-care bill, leaving it without enough votes to pass”Sens. Mike Lee (R-Utah) and Jerry Moran (R-Kan.) issued statements declaring that they would not vote for the revamped measure. They joined Sens. Rand Paul (R-Ky.) and Susan Collins (R-Maine), who also oppose it. With just 52 seats, Republicans can afford to lose only two votes to pass their proposed rewrite of the Affordable Care Act. All 48 Democrats are expected to vote against it.”

“In addition to not repealing all of the Obamacare taxes, it doesn’t go far enough in lowering premiums for middle class families; nor does it create enough free space from the most costly Obamacare regulations,” Lee said in a statement.”

“In addition to not repealing all of the Obamacare taxes, it doesn’t go far enough in lowering premiums for middle class families; nor does it create enough free space from the most costly Obamacare regulations,” Lee said in a statement.”

“The two conservatives timed the release of their statements and made clear that modest tinkering around the edges of the legislation drafted by Majority Leader Mitch McConnell (R-Ky.) would be insufficient to meet their demands.”

“They joined a pair of other GOP colleagues in calling for a long process of completely redrawing the legislation that would take months and months, short-circuiting McConnell’s wish to end the debate this month.”

“Senate Republican leaders returned to the Capitol on Monday (7/24/17) still pledging to press ahead with plans to pass a sweeping overhaul of the nation’s health-care system, but the news of Lee and Moran digging in against the bill created the deepest doubts yet as to whether it could pass.”

“The day had already begun with uncertainty as the health of Sen. John McCain thrust the future of the flagging effort deeper into doubt.

In a speech on the Senate floor, McConnell said that he spoke with McCain (R-Ariz.) on Monday morning and that “he’ll be back with us soon.” The Arizonan is recovering from surgery to remove a blood clot above his left eye that involved opening his skull.”

“McConnell has delayed action on health care until McCain’s return. While McConnell has no way to pass the legislation without his vote, McCain’s presence in the Capitol is far from a guarantee that it will succeed.”

“McCain has voiced worries about the measure and has not committed to voting for it. In addition, Sen. Ron Johnson (R-Wis.) hinted Monday that he might vote against advancing the measure to floor debate — departing from his posture last week. Johnson’s opposition would bring to three the number of GOP senators opposed to advancing the bill; with 52 Republicans (and Vice President Pence ready to cast a tiebreaking vote), the party can lose only two.”In his speech, McConnell said Republicans intend to put in “continued hard work” to pass their proposed rewrite of much of the Affordable Care Act.

“But the likely timetable remained unclear. McCain, 80, is awaiting results of tissue pa­thol­ogy reports “pending within the next several days,” the hospital treating him said in a statement over the weekend. He will be away from the Senate for at least the rest of the week. A McCain spokeswoman had no further update on his condition Monday.”

“Sen. Lindsey O. Graham (R-S.C.), perhaps McCain’s closest friend in the Senate, spoke to him by phone as he was walking to the Senate chamber for a vote Monday evening. The two had an animated conversation, and Graham said McCain was “dying to get back.”

“They were doing a routine checkup and they found the spot and it looks like everything is going to be A-okay,” Graham said. He said McCain’s doctors “don’t want him to fly for a week, adding, “I think he would walk back if they would let him.”

“Senate Republicans are under self-imposed pressure to complete their work on health care soon. As they have struggled to show progress, McConnell has already said he will keep the chamber in session through the first two weeks of August, postponing the start of the summer recess period to leave time to work on other matters.” Key Republican senators — and the GOP governors they turn to for guidance — have raised concerns about how the bill would affect the most vulnerable people in their states. Private lobbying by the White House and Senate GOP leaders has not mollified them.” 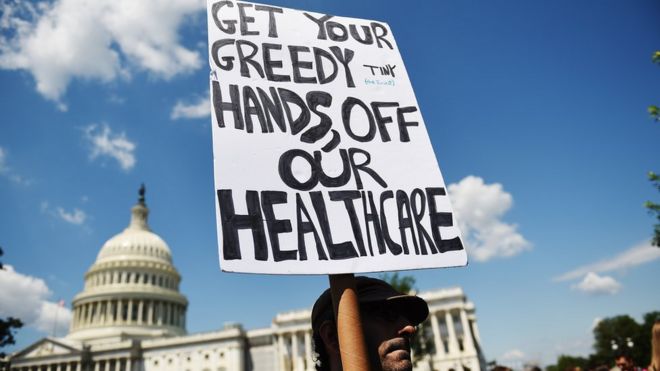 “Johnson said Monday that last week he was “strongly in favor” of taking a procedural vote allowing the bill to advance to floor debate. But he said he was unhappy with recent comments by McConnell that the bill’s deepest Medicaid cuts are far into the future and are unlikely to go into effect anyway.”

“Johnson said he read the comments in The Washington Post and confirmed them with other senators. He said he planned to talk to McConnell about it Tuesday at the weekly GOP policy lunch. In a statement late Monday, McConnell responded: “I prefer to speak for myself, and my view is that the Medicaid per capita cap with a responsible growth rate that is sustainable for taxpayers is the most important long-term reform in the bill. That is why it has been in each draft we have released.”