aside Is Jared Kushner That Brilliant Or Did He Have A Lot Of Assistance For His Digital-Run Campaign?

I’m not the only one asking the question, Is Jared Kushner really that brilliant, or is it possible that he had the assist from skilled Russian operators? In the prior blog I connected the dots of differing facts that got me to pose this question.

One of the facts that led me to this inquiry is based  on a 12/20/17 Forbes report by Steven Bertoni. He writes, “But by running the Trump campaign–notably, its secret data operation–like a Silicon Valley startup, Kushner eventually tipped the states that swung the election. And he did so in manner that will change the way future elections will be won and lost. President Barack Obama had unprecedented success in targeting, organizing and motivating voters. But a lot has changed in eight years. The Trump campaign, meanwhile, delved into message tailoring, sentiment manipulation and machine learning. The traditional campaign is dead, another victim of the unfiltered democracy of the Web–and Kushner, more than anyone not named Donald Trump, killed it.”

It is important to note that the digital company, Cambridge Analytica utilized during the president’s 2016 campaign by the president’s son-in-law Jared Kushner, is owned by a billionaire Father/ Daughter team, Robert and Rebekah MERCER that fund right wing political candidates, media outlets and causes/ movements. Both are strong supporters of the republican President Donald Trump.

On May 23, 2017, Kate Brannen of Newsweek penned the following opinion piece, “DID RUSSIANS TARGET DEMOCRATIC VOTERS, WITH KUSHNER’S HELP?”(This article first appeared on the Just Security site. Kate Brannen is the deputy managing editor of Just Security and a nonresident senior fellow at the Brent Scowcroft Center on International Security at the Atlantic Council.)

“Last week, new reporting shined a light on one focus of the congressional investigation: determining how the Russians knew which voters to target with their disinformation campaign. A report from TIME’s Massimo Calabresi on Thursday provided new details:”

“As they dig into the viralizing of such stories, congressional investigations are probing not just Russia’s role but whether Moscow had help from the Trump campaign. Sources familiar with the investigations say they are probing two Trump-linked organizations: Cambridge Analytica … and Breitbart News.”

“Cambridge Analytica is the data mining firm hired by the Trump campaign to help it collect and use social media information to identify and persuade voters to vote (or not vote), through an activity known as political micro-targeting.”

“The company is principally owned by Robert Mercer, a hedge fund billionaire who supported Trump and was a leading investor in Breitbart.”

“Stephen Bannon, Trump’s campaign chairman (after Manafort) and now chief strategist at the White House, was the vice president of Cambridge Analytica’s board as well as the executive chairman of Breitbart before joining Trump’s team in August.”

“Meanwhile, the UK information commissioner announced Wednesday it was launching an investigation “into the use of data analytics for political purposes,” the Guardian reports.”

“It’s worth remembering that when Comey testified before Congress on March 20, he did not use the word “collusion” to describe what he was investigating. Instead he said the FBI is investigating “whether there was any coordination between the campaign and Russia’s efforts.”

“The letter appointing Robert Mueller as special counsel uses the same language. Calabresi’s report, plus other recent clues, start to paint a picture of what the investigators might be looking at in terms of “coordination.” Calabresi writes:”

“The congressional investigators are looking at ties between those companies and right-wing web personalities based in Eastern Europe who the U.S. believes are Russian fronts, a source familiar with the investigations tells TIME. “Nobody can prove it yet,” the source says.”

“In the United Kingdom, Cambridge Analytica has been linked to the Leave.EU campaign, although the company denies this. The company is now threatening legal action against the Guardian , which published a series of articles that investigated the role that may have been played by Mercer and Cambridge Analytica in the campaign to leave the European Union.”

“Insight into the level of scrutiny the company faces here in the U.S. also came Monday May 15, 2017 during an interview with Sen. Mark Warner (D-Va.), the vice chairman of the Senate Intelligence Committee.”

“During the conversation, Tommy Vietor, a former spokesman for the National Security Council, asked Warner this question:”

“Vietor : One thing I’ve heard about the focus of the Senate Intelligence Committee’s investigation into the Russian hacking is that the sophistication and the preciseness of the targeting is something that’s being looked at closely. Specifically that Russian bots were targeting Clinton voters at the precinct level to suppress their vote with fake news, and that that level of expertise would require data from a targeting firm, like Cambridge Analytica, for example.”

“Is that true? And can you tell us anything about the nature of these Russian hacks that I’m hearing about?”

“Warner: When you see some of the explanation and some of the fact that it appears that, for example, women and African Americans were targeted in places like Wisconsin and Michigan, where the Democrats were too brain dead to realize those states were even in play … It was interesting that those states seem to be targeted where the bots — where they could could create a lot of these fake Twitter and Facebook accounts, could in fact overwhelm the targeted search engines that would end up saying on your news feed, you suddenly got stuff that “Hillary Clinton’s sick” or “Hillary Clinton’s stealing money from the State Department.”

“I get the fact that the Russian intel services could figure out how to manipulate and use the bots. Whether they could know how to target states and levels of voters that the Democrats weren’t even aware really raises some questions. I think that’s a worthwhile area of inquiry.”

“How did they know to go to that level of detail in those kinds of jurisdictions?”

“Vietor : I wonder if they just asked Jared [Kushner] like Trump does with all of his questions. We’ll find out.”

“Cambridge Analytica has bragged about the role it played in helping Trump win the election, a boast that some critics say is exaggerated. But Jared Kushner, Trump’s son-in-law and adviser, explained to Forbes shortly after the election how data mining and microtargeting won the election for Trump. The article states:”

“The Trump campaign, meanwhile, delved into message tailoring, sentiment manipulation and machine learning. The traditional campaign is dead, another victim of the unfiltered democracy of the Web–and Kushner, more than anyone not named Donald Trump, killed it.”

“The Forbes article also talks about how Cambridge Analytica was brought in to work on these efforts:”

“This wasn’t a completely raw startup. Kushner’s crew was able to tap into the Republican National Committee’s data machine, and it hired targeting partners like Cambridge Analytica to map voter universes and identify which parts of the Trump platform mattered most: trade, immigration or change.”

“Tools like Deep Root drove the scaled-back TV ad spending by identifying shows popular with specific voter blocks in specific regions–say, NCIS for anti-ObamaCare voters or The Walking Dead for people worried about immigration. Kushner built a custom geo-location tool that plotted the location density of about 20 voter types over a live Google Maps interface.”

“In addition to the work it was doing for Trump, Cambridge Analytica was also employed by a Republican political action committee to help suppress Democratic votes, according to a recent report in The Guardian.”

“Cambridge Analytica worked on campaigns in several key states for a Republican political action committee. Its key objective, according to a memo the Observer has seen, was “voter disengagement” and “to persuade Democrat voters to stay at home”: a profoundly disquieting tactic. It has previously been claimed that suppression tactics were used in the campaign, but this document provides the first actual evidence.”

“These stories make clear that Cambridge Analytica was hired to target voters with messages aimed at heightening their outrage or encouraging their apathy. Interestingly, this is what the Russians were up to as well.” 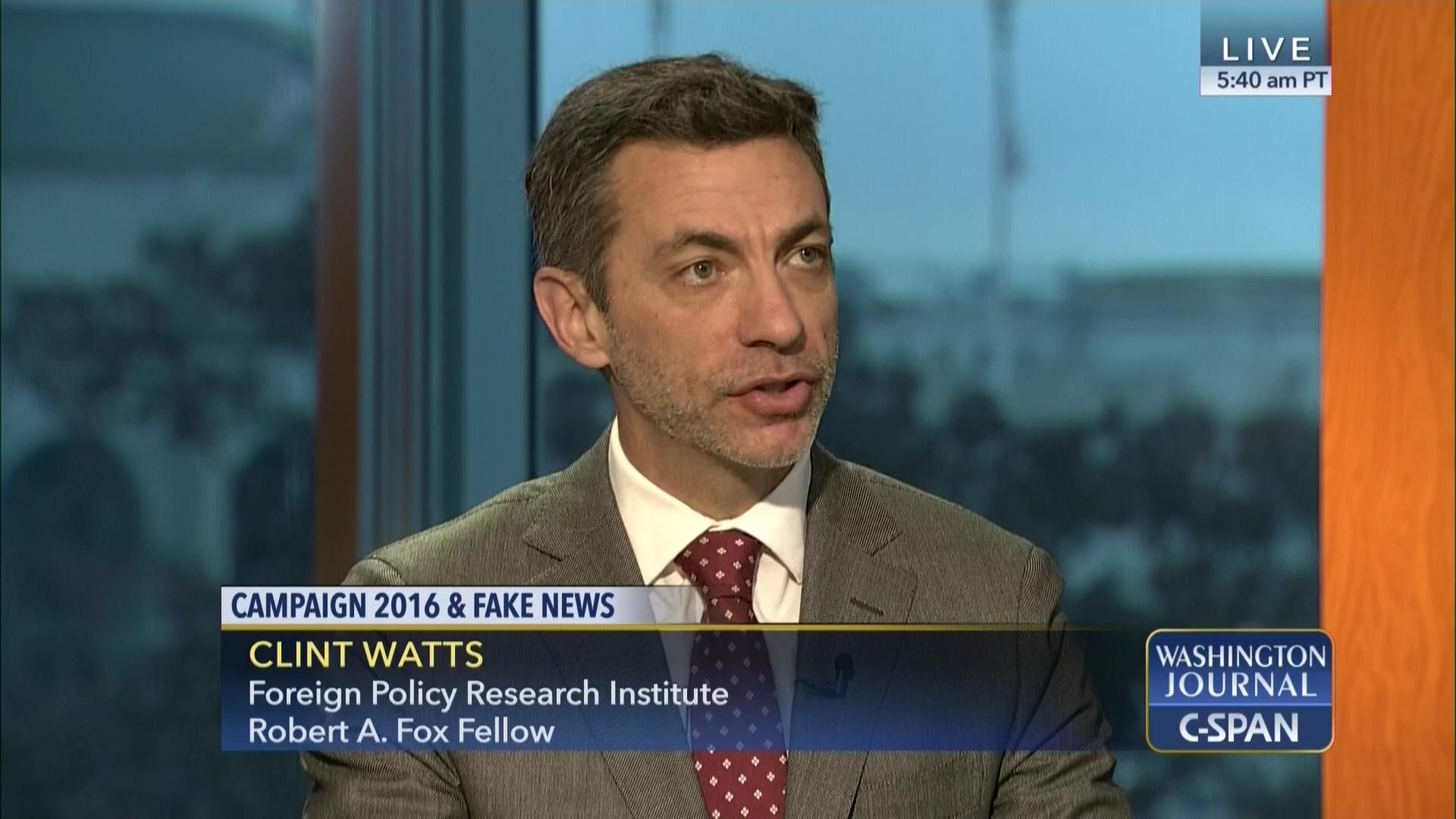 At a March 30, 2017 hearing of the Senate Intelligence Committee, Clint Watts, a counterterrorism expert and former FBI special agent, testified that:

Today, you can create the content, gain the audience, build the bots, pick out the election and even the voters that are valued the most in swing states and actually insert the right content in a deliberate period.

As investigators try to figure out how Russia carried out its election interference, they’re asking how they happened to identify the right voters to bombard with the right messages, and how they got access to that kind of information. 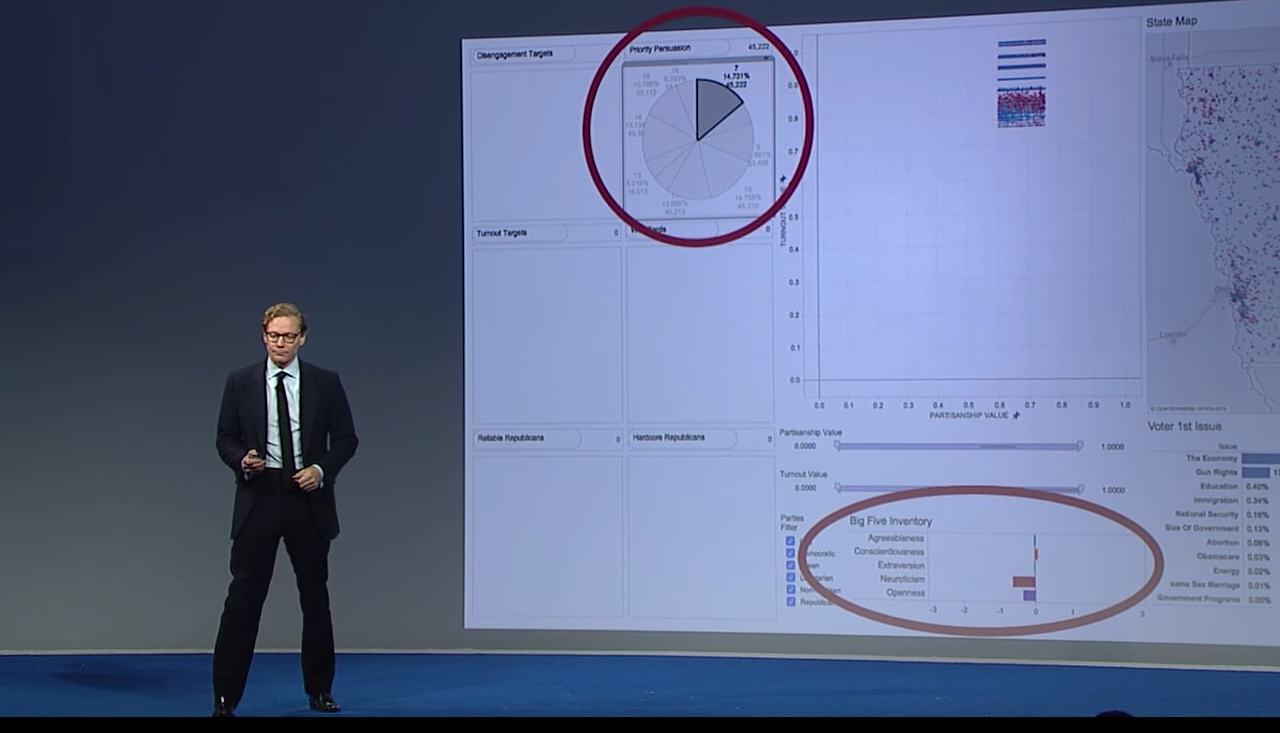 “Paul Wood, a reporter at the BBC who’s been ahead of the pack on the Russia-Trump investigation, had some eye-catching information in a story back in March 2017. He wrote :

“This is a three-headed operation,” said one former official, setting out the case, based on the intelligence: First, hackers steal damaging emails from senior Democrats. Secondly, the stories based on this hacked information appear on Twitter and Facebook, posted by thousands of automated “bots”, then on Russia’s English-language outlets, RT and Sputnik, then right-wing US “news” sites such as Infowars and Breitbart, then Fox and the mainstream media. Thirdly, Russia downloads the online voter rolls.”

“The voter rolls are said to fit into this because of “microtargeting”. Using email, Facebook and Twitter, political advertising can be tailored very precisely: individual messaging for individual voters.”

“You are stealing the stuff and pushing it back into the US body politic,” said the former official, “you know where to target that stuff when you’re pushing it back.”

“This would take co-operation with the Trump campaign, it is claimed.”

“After sifting through these stories and publicly available information, here are a few open questions:”

Related ARTICLE: Michael Dorf: Why Flynn Was Fired Is the Key to the Russia Plot