aside General John F. Kelly Is The President’s New Chief Of Staff

The news was expected. The news channels are all breaking the news that the current Homeland Secretary General John Kelly has been assigned the position of the republican President Donald Trump’s White House Chief of Staff as a replacement to Reince Priebus.

A couple of sources are stating that Reince Priebus is claiming that he quietly submitted his  letter of resignation to the president, on July 27, 2017.

It now appears that the new communications director Anthony Scaramucci’s rant against the former chief of staff Reince Priebus, a couple of days ago, with the New Yorker Reporter, may have been sanctioned by the president.

The president made this announcement by tweet along the lines, “General Kelly has done a spectacular job at Homeland Security. He is a great American and a great leader. He has been a star in my administration.”

“The president tweeted his decision after days of public tensions between Priebus and Anthony Scaramucci, the incoming White House communications director.”

On July 28, 2017, Max Greenwood of the Hill penned this foreshadowing report, “Trump says he wants a “general” to replace Priebus: report.”
Excerpts:
“President Trump has said privately that he wants to appoint “a general” to replace White House chief of staff Reince Priebus, The New York Times reports.”

“The president, the Times reported on Thursday, has so far focused on Homeland Security Secretary John Kelly as a potential replacement, though advisers believe that would be a bad move.”

“Trump has reportedly said that he no longer has faith in Priebus, a former Republican National Committee chairman who was tapped for chief of staff shortly after Trump was elected.”

“Priebus has lost key allies in the White House over the past week, most notably former press secretary Sean Spicer, who resigned immediately after Trump appointed Anthony Scaramucci as his new communications director.” 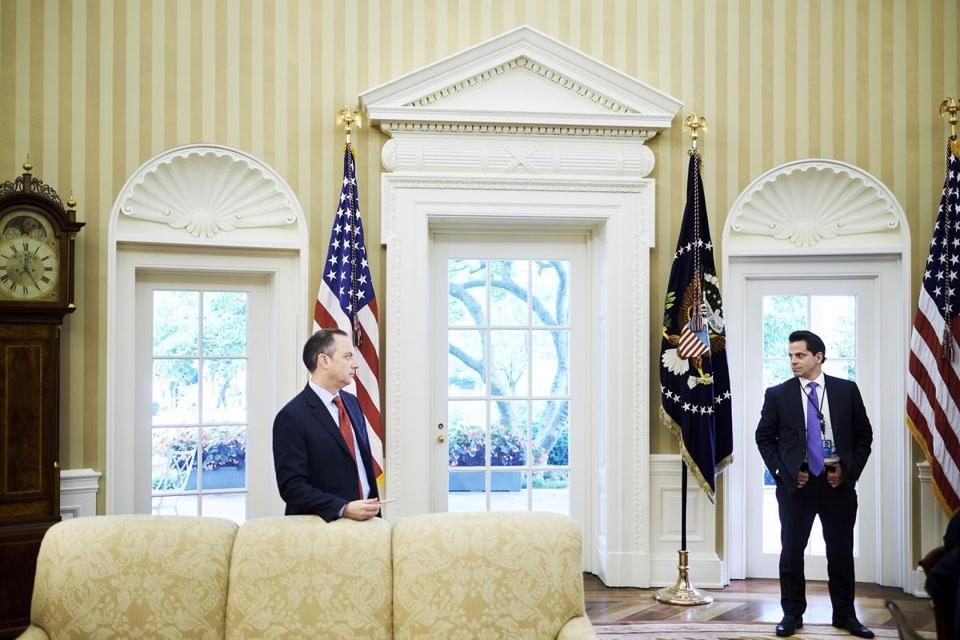 “Scaramucci has carried out a public feud with Priebus since entering the White House. That feud accelerated on Thursday, when The New Yorker’s Ryan Lizza published an interviewwith Scaramucci in which the communications director delivered a profanity-laced tirade against Priebus and accused him of leaking information to the press.”

“That tirade, in which he called Priebus a “f—ing paranoid schizophrenic, a paranoiac,” was Scaramucci’s clearest indication yet that he is trying to get rid of the chief of staff.”

“According to the Times, Priebus has been the subject of criticism from Trump himself. The president has brought up repeatedly how Priebus suggested that Trump withdraw from the presidential race last October after the release of the “Access Hollywood” tape.”