As per various news reports, it appears that the republican President Donald Trump’s new Chief of Staff General John Kelly has truly taken charge. He has started by reaching out to the Attorney General Jeff Sessions to advise him that his job is safe. So far it has been made clear that all senior staff including the president’s son-in-law Jared Kushner with the exception of the president’s daughter Ivanka Trump will be acting under the direction of General Kelly. I did note that none of the news sources specifically mentioned the president’s daughter Ivanka Trump.

But guess who is tweeting first thing this morning of Thursday, August 3rd. Yes, the president has been tweeting about how it is the fault of the US CONGRESS THAT RELATIONS BETWEEN RUSSIA AND THE U.S. IS AT AN ALL TIME LOW.

“Kelly, who was named chief of staff by Trump on Friday (7/28/17), phoned Sessions on Saturday to reassure him the White House wanted him to remain as head of the Justice Department, said the official, who spoke on condition of anonymity.”

“Kelly said Trump was still annoyed with Sessions’ decision in March to recuse himself from the investigation of alleged Russian meddling in the 2016 U.S. election and possible collusion with the Trump campaign, but there had been “kind of a thaw” in Trump’s attitude toward him, according to the official.”

As per the 8/2/17 Politico report,”Sources: New White House chief of staff Kelly called Sessions to assure him his job was safe,” by Josh Dawsey and Josh Gerstein, “The officials said Kelly told Sessions to keep up his initiatives at the department and that Trump’s disappointment wouldn’t lead to his firing, as Trump has occasionally suggested. The call showed that Kelly sees himself as an empowered chief of staff, but Trump could surely change his mind, associates said.”

“Trump remains angry at Sessions for recusing himself from the probe involving the president’s campaign and potential Russian collusion.”

“At times last month, Trump was slamming Sessions daily on Twitter. However, the president has offered no public criticism of the attorney general for about a week.”

“Sessions, an early campaign supporter, has been on the outs with Trump for several months, even as the two men largely agree on policy. The Alabama law enforcement official has said he was stung by the criticisms from his boss, which have come on Twitter and in news interviews.”

On August 2, 2017, Vivian Salama and Jill Colvin of the AP report penned the following report, “Kelly wins praise across the aisle, but will Trump change?”

“Raised voices could be heard through the thick door to the Oval Office as John Kelly — then secretary of Homeland Security — offered some tough talk to President Donald Trump.”

“Kelly, a whip-cracking retired general who was sworn in as White House chief of staff on Monday, had demanded to speak to the president alone after Trump complained loudly that the U.S. was admitting travelers from countries he viewed as high risk.” 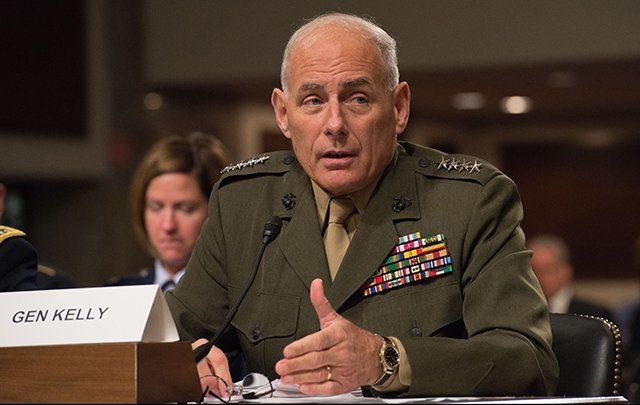 “Kelly first tried to explain to Trump that the admissions were standard — some people had legitimate reasons to visit the country — but the president insisted that it was making him look bad, according to an administration official familiar with the exchange about a month ago.”

“Kelly then demanded that other advisers leave the room so he could speak to the president frankly. Trump refused at first, but agreed when Kelly insisted.”

“It was an early indication that Kelly, a decorated retired Marine general who served three tours in Iraq, is not afraid to stand up to his commander-in-chief.”

“Sanders said Tuesday that Kelly had spent his first day on the job speaking with members of Congress, getting to know White House staffers and working to put new procedures in place.”

“It definitely has the fingerprints of a new sheriff in town,” said Blain Rethmeier, who guided Kelly through the Senate confirmation process for the Homeland Security post. Rethmeier said that what stood out about Kelly during the time they worked together was the way Kelly commanded respect from everyone he encountered — and the way he respected others.”

“Sen. Lindsey Graham, R-S.C., expressed confidence that Kelly can help restore order, saying on NBC’s “Today” show that “the Marines have landed at the White House. They have a beachhead.”

“And Sen. Dick Durbin of Illinois told CNN that Kelly “is in a position where he can stabilize this White House, that’s good for this country. The president has to be part of that.”

“Jason Miller, a senior communications adviser during the Trump presidential campaign, predicted on CNN that Kelly’s next move will be to put people in place that will help the president. He suggested Kelly should convince ousted press secretary Sean Spicer to stay on, at least through the tax overhaul effort.”

“Kelly fostered a reputation as an outspoken commander who didn’t shy away from unpopular opinions during his military career. Rethmeier said that Kelly also respects authority deeply — “and that’s something that Trump sort of smells out, if you respect him or not.”

“In April, Kelly bluntly challenged members of Congress critical of the Trump administration’s aggressive approach to immigration enforcement to either change the laws or “shut up.”

But after being confirmed as part of Trump’s Cabinet, Kelly also tried to moderate some of the president’s hard-line positions, even as he publicly defended them.

“Kelly and Defense Secretary Jim Mattis, another retired general, were also said to have been deeply frustrated with the rollout of Trump’s refugee and immigration ban, and made clear to associates that they were not involved in drafting it or aware of its details around the time that Trump signed the original order. Both moved swiftly to address gaps in the measure, with Mattis asking that Iraqis who helped U.S. troops be exempt and Kelly clarifying that green-card holders would not be affected.”

“Mattis and Kelly also agreed in the earliest weeks of Trump’s presidency that one of them should remain in the United States at all times to keep tabs on the orders rapidly emerging from the White House, according to a person familiar with the discussions. The official insisted on anonymity in order to discuss the administration’s internal dynamics.”

David B. Cohen, a University of Akron political science professor writing a book on chiefs of staff, applauded Kelly for doing “things that should have been done on Day One of Reince Priebus’s tenure. But Cohen wondered how long Trump would go before undermining Kelly.”