There were many of the republican President Donald Trump’s nominees who should not have been confirmed by the republicans in the US Senate, and number one on that list is Betsy Devos as Secretary for the Department of Education. She is a darling of the far-right for her single minded determination to promote Charter Schools in Michigan. Her efforts have been proven to be a failure as detailed in the below lengthy report. The link to the entire report is footnoted at the end of this post.

“Toss a dart at a map of Detroit, and the bull’s-eye, more or less, would be a tiny city called Highland Park. Only three square miles, Highland Park is surrounded by Detroit on nearly all sides, but it remains its own sovereign municipality thanks largely to Henry Ford, who started building Model Ts there in 1910. Ford didn’t care for the idea of paying Detroit taxes, so he pressured Highland Park to resist annexation by the larger city. By the end of the decade, his Albert Kahn-designed factory had revolutionized mass production. Five years later, Walter Chrysler started his own car company a few blocks away. “

“Sylvia Brown lives in the suburbs now, but she still proudly calls herself a Parker, the local term for a Highland Park native. When Brown was a kid, she’d tell people she lived in the capital of Detroit. Her father worked for the city, and her mother taught at the public elementary school. In high school, Brown played on the volleyball and tennis teams and won a scholarship her junior year to study abroad in Japan.”

“So when the offer came last summer to take a job as the superintendent of George Washington Carver Academy, a pre-K-8 charter school in Highland Park, Brown thrilled at the chance to come home. She also had no illusions about what she was signing up for. In 1992, Brown’s sophomore year at Highland Park High, Chrysler’s corporate headquarters decamped to exurban Auburn Hills, a departure that cost Highland Park a quarter of its tax base and 50 percent of its annual budget. Today the city is staring down the same problems as much of Detroit: crime, abandonment, disinvestment.”

“A major victim of the city’s borderline insolvency was its public-school system, which had been under state control since 2012. (Six different state-appointed emergency managers have run the district since then.) Plummeting enrollment, legacy costs and financial mismanagement had left the school system with a projected deficit of $10 million. The state’s solution that year was to “charterize” the entire district: void the teacher’s union contract, fire all employees and turn over control of the schools to a private, for-profit charter operator. But enrollment at Highland Park High continued to decline, so the state closed the school in 2015. Highland Park now has no high school, either public or charter. Families send their children to high schools in Detroit or the suburbs, where they have no electoral influence over local officials or school boards.”

“The for-profit charter school movement is not about doing what is best for kids, it’s about companies making money. Period. For profit…The Carver Academy sits a block from the defunct Model T plant, now used primarily as a storage facility. The school building is an old Farmer Jack grocery store that has been converted into classrooms, with an added wing and a handful of trailers. On my first visit, in January, I met with Brown in her office. She had curly hair and a casually stylish work look: black skirt, matching sweater, pearls on her wrists and neck. Brown had been having a rough couple of weeks. Only a few days earlier, Michigan’s Department of Education released its annual Top-to-Bottom List of every school in the state, and Carver wound up in the lowest fifth percentile. Brown wasn’t surprised by the ranking: “It’s not like I was hoodwinked and thought I was coming into a top-performing school,” she said. But she also bristled at the “scarlet letter” Carver, and by extension its students, had been branded with. The Top-to-Bottom List, she pointed out, largely reflects the results of a single standardized test, the Michigan Student Test of Educational Progress (M-STEP), and the latest rankings are based on testing data from the two years before she arrived.” 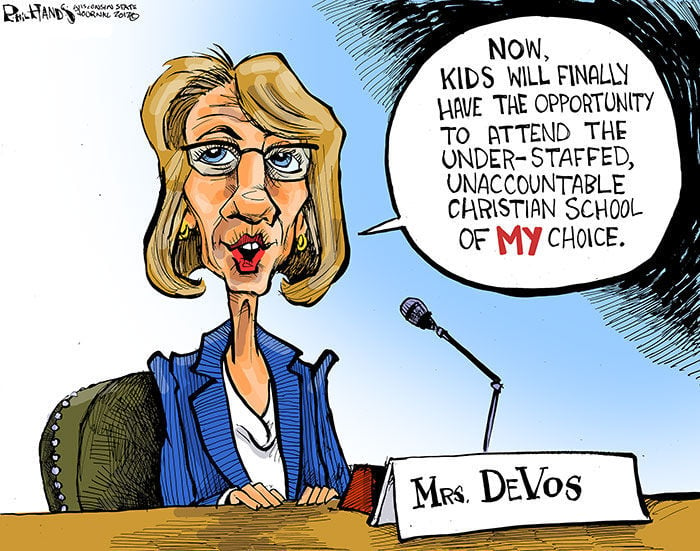 “Even setting aside standardized test scores, which are debatable as measures of “success” or “failure,” Carver probably isn’t the sort of institution where most school-choice proponents would send their own children. In past years, headlines involving Carver included a 2008 cheating scandal (in which teachers were caught improperly coaching fourth and fifth graders on the answers to standardized tests) and a 2011 felony embezzlement conviction (of the school’s treasurer, who used $25,000 earmarked for textbooks to buy herself a house). Today, the school still lacks needed funds.”

“Charter proponents will point out, correctly, that you could work up a similar indictment of any number of public schools in struggling cities like Detroit. But in theory, at least, public-school districts have superintendents tasked with evaluating teachers and facilities. Carver, on the other hand, is accountable to more ambiguous entities — like, for example, Oak Ridge Financial, the Minnesota-based financial-services firm that sent a team of former educators to visit the school. They had come not in service of the children but on behalf of shareholders expecting a thorough vetting of a long-term investment: Brown was in negotiations with Oak Ridge about refinancing the school’s debt in order to make much-needed repairs, and the firm was performing the sort of oversight normally handled by a school district. Michigan schools remaining in the bottom fifth percentile for three years running must close, which, in the case of Carver, would leave Oak Ridge on the hook for a 13-year loan.” “The crisis at Carver Academy was not unfolding in isolation. Michigan’s aggressively free-market approach to schools has resulted in one of the most deregulated educational environments in the country, a laboratory in which consumer choice and a shifting landscape of supply and demand (and profit motive, in the case of many charters) were pitched as ways to improve life in the classroom for the state’s 1.5 million public-school students. But a Brookings Institution analysis done this year of national test scores ranked Michigan last among all states when it came to improvements in student proficiency. And a 2016 analysis by the Education Trust-Midwest, a nonpartisan education policy and research organization, found that 70 percent of Michigan charters were in the bottom half of the state’s rankings. Michigan has the most for-profit charter schools in the country and some of the least state oversight. Even staunch charter advocates have blanched at the Michigan model.”