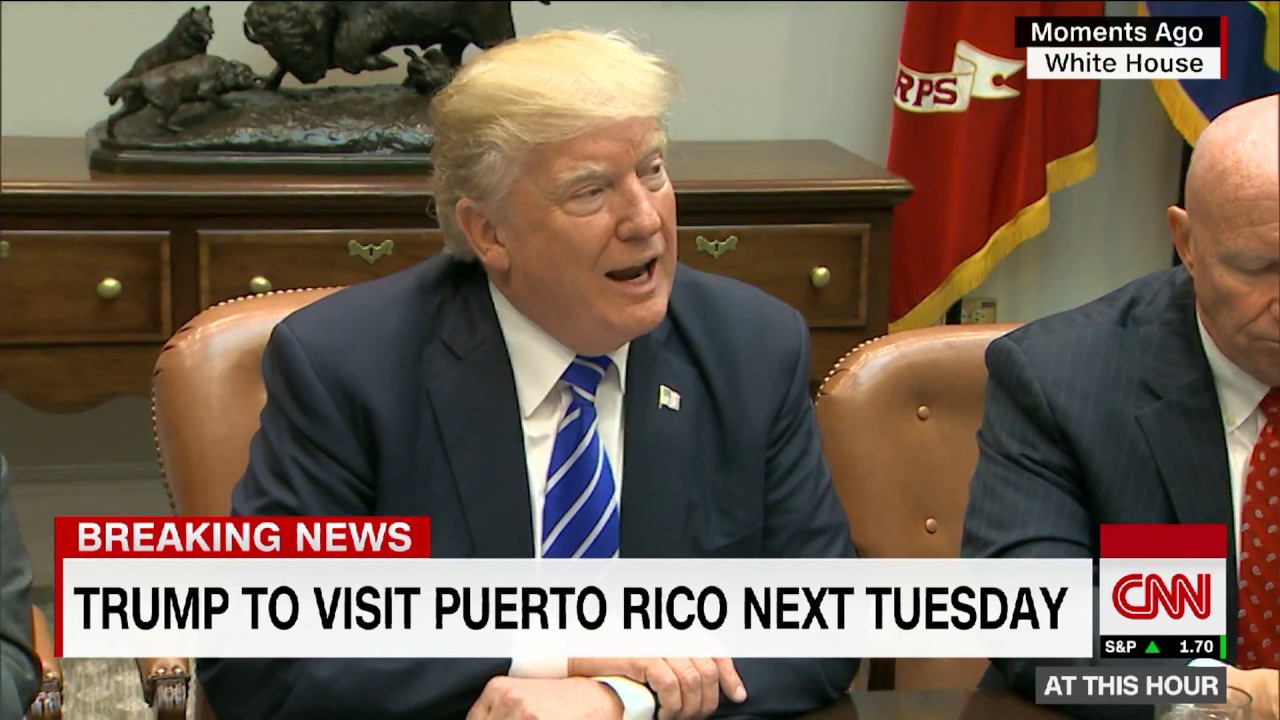 According to a 9/29/17 Hill report by Ellen Mitchell, the three star Army Lt. Gen. Jeff Buchanan heading the military effort in Puerto Rico said the following on 9/29/17,  “For example, on the military side, we’re bringing in both Air Force, Navy, and Army medical capabilities in addition to aircraft, more helicopters. … [But] it’s not enough, and we’re bringing more in.” This is 9 days after Hurricane Maria decimated this island.

The republican President Donald J. Trump is demonstrating poor manners with his veiled anti- Latino comments as he lashes out against officials of Puerto Rico for daring to question his commitment towards their island where American citizens are undergoing  a “humanitarian crisis,” because of Hurricane Maria which razed their land around September 20, 2017. With the peoples of Puerto Rico are in dire straights, why is the president off to his NJ weekend retreat to play golf?

This is what the president wrote in several tweets from his golf resort in Bedminster, N.J., on Saturday morning (9/30/17), suggesting the San Juan Mayor Cruz was a poor leader who had been “told by the Democrats that you must be nasty to Trump,” and complaining that Puerto Rican workers “want everything to be done for them.”

“President Trump lashed out at the mayor of San Juan on Saturday for criticizing his administration’s efforts to help Puerto Rico after Hurricane Maria, accusing her of “poor leadership” and implying that the island, which lacks electricity and has limited cellphone service, water and fuel, was not doing enough to help itself.”

“In a series of early-morning messages on Twitter from his New Jersey golf club, where he is spending the weekend, Mr. Trump dismissed the statements by the capital’s mayor, Carmen Yulín Cruz, as political and asserted that his administration had organized a response by federal workers who are “doing a fantastic job.”

“Mr. Trump said his critics in Puerto Rico should not depend entirely on the federal government. “They want everything to be done for them when it should be a community effort,” he wrote. “10,000 Federal workers now on Island doing a fantastic job. The military and first responders, despite no electric, roads, phones etc., have done an amazing job. Puerto Rico was totally destroyed.”

“The seemingly slow response to the hurricane in Puerto Rico, an American territory — especially compared with the federal response to storms in Texas and Florida — threatened to become a political disaster for Mr. Trump as critics compared it to President George W. Bush’s handling of Hurricane Katrina in 2005. Mr. Trump has alternated between expressions of resolve and concern on the one hand and angry recriminations against critics on the other.”

“Ms. Cruz became a powerful voice of grievance on Friday when she went on television to plead for help and reject assertions by the Trump administration about how well it was responding. She was incensed by comments made by Elaine Duke, the acting secretary of Homeland Security, who had said on Thursday that it was “really a good news story in terms of our ability to reach people and the limited number of deaths” from the hurricane.”

“Ms. Duke traveled to Puerto Rico on Friday and tried to smooth over the flap, agreeing that the situation on the ground “is not satisfactory.”

“Ms. Cruz, a member of the Popular Democratic Party, which advocates maintaining the island’s commonwealth status, was unmollified and went back on CNN on Friday night to continue her pleas for help.”

“People are drinking out of creeks here in San Juan,” Ms. Cruz, wearing a black T-shirt that said, “Help Us, We Are Dying,” told the host Anderson Cooper. “You’ve people that are in buildings, and they’re sort of becoming caged in their own buildings — old people, retired people that just don’t have any electricity.”

“At least 16 people have died in Puerto Rico in the hurricane’s aftermath, although that number could rise. The island has a population of 3.4 million people. The Trump administration has appointed a three-star general to coordinate the response and waived the Jones Act, a maritime commerce statute that was seen as a hindrance to relief efforts.”

“We’re dying here,” Ms. Cruz said. “We truly are dying here. And I keep saying it, S.O.S. If anyone can hear us, if Mr. Trump can hear us, let’s just get it over with and get the ball rolling.”