When a major earthquake hit Haiti in 2010, before dawn the next morning, an Army unit was airborne, on its way to seize control of the main airport in Port-au-Prince. Within two days, the Pentagon had 8,000 American troops en route. Within two weeks, 33 U.S. military ships and 22,000 troops had arrived. More than 300 military helicopters buzzed overhead, delivering millions of pounds of food and water. The question is why hasn’t Puerto Rico whose residents are American citizens experienced a similar response from the US government.

On September 30, 2017, the Saturday Night Live TV show created a skit around the republican President Donald Trump’s reaction to Mayor Cruz of San Juan, Puerto Rico who has been vocal in her criticism of the US government’s slow and inadequate response where Americans’ lives were at risk after Hurricane Maria decimated the island around September 20, 2017. It took a week before the president waived the Jones Act for Puerto Rico (for 10 days only) when this has typically been done in other catastrophes within 24 hours. The waiving of this act allows foreign owned vessels to deliver aid as well as US ships to Puerto Rico.

The three star Army LT. General Jeff Buchanan who is heading the military effort in Puerto Rico has stated that more military service peoples are needed. Eight days after Hurricane Maria ripped across neighboring Puerto Rico, just 4,400 US military service members plus 1000 Coast Guard members were participating in federal operations to assist the devastated island. According the news reports, about 40 U.S. military helicopters were helping to deliver food and water to the 3.4 million residents of the U.S. territory, along with 10 Coast Guard helicopters.

There is nothing funny about what is happening in Puerto Rico.  There are facts which demonstrate that President’s administration has been slow to respond adequately to the “humanitarian crisis” in Puerto Rico.

As per the 10/01/17, New York Times article by Dave Itzkoff, “Naturally, the show’s cold open starred Mr. (Alec) Baldwin as Mr. Trump, making a return to the Oval Office in a golf shirt so he could address the devastation in Puerto Rico after Hurricane Maria. (“Sometimes when you’re president you have to make sacrifices, so I skipped the back nine,” Mr. Baldwin said.)”

“The sketch imagined a phone call between Mr. Trump and Carmen Yulín Cruz, the mayor of San Juan (played by the cast member Melissa Villaseñor). “I’m begging you, Puerto Rico needs your help,” she told him.”

Mr. Baldwin responded, “You called the best person for the job. Trust me, I know things are, as the locals say, despacito.”

“He promised to send help “by Tuesday or Wednesday at the latest.” When Ms. Villaseñor said that wouldn’t be good enough, he replied, “Well, you should have paid your bills. FEMA takes a few days, unless you join FEMA Prime.”

“At one point, Mr. Baldwin said, “We want to help you, but we have to take care of America first.” Ms. Villaseñor replied, “You do know we’re a U.S. territory?” 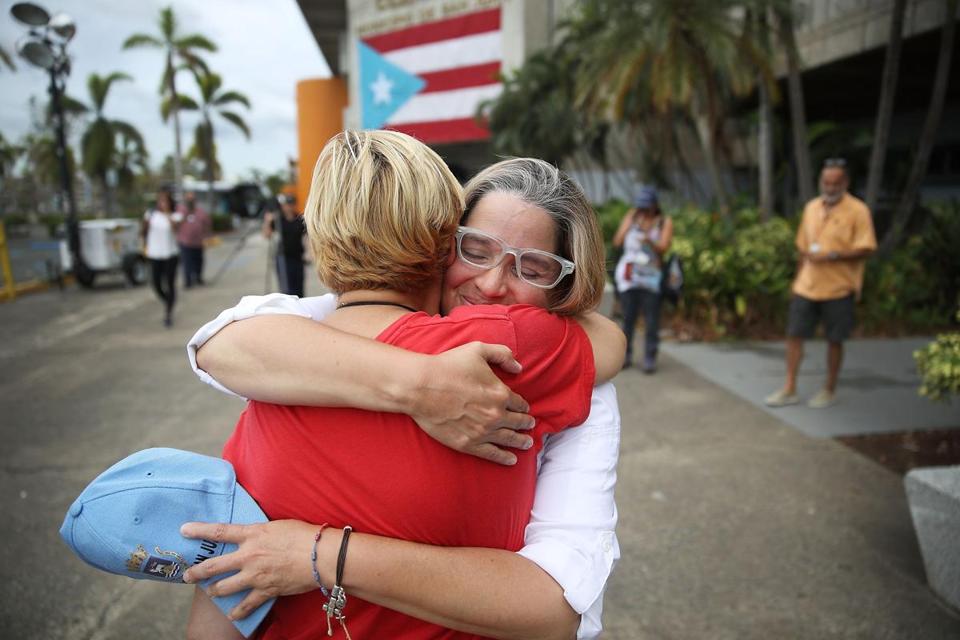 “After a pause, Mr. Baldwin answered, “I mean, I do, but not many people know that.”

“Mr. Baldwin also shared an exchange with Aidy Bryant, playing the White House press secretary Sarah Huckabee Sanders. Reflecting on her handling of “the N.F.L. thing,” Ms. Bryant said, “I’m a little embarrassed that I said it’s a black and white issue. I should have said it’s a black versus white issue.”

“Mr. Baldwin replied, “People say I remind them of an N.F.L. player, because I’m combative, I like to win, and I might have a degenerative brain disease.”