The republican legislators have been hard at work for years to sabotage Obamacare. The sabotaging plans have been ratcheted forward since the republicans failed three times to pass their legislative attempts to “repeal and replace” Obamacare.

In the later part of 2017, there are several steps that the republican President Donald Trump and his administration officials have taken to ensure the failure of Obamacare. Some examples include , the advertising budget being cut by  90% which lets consumers know about the future sign up dates and other pertinent information; the allotted enrollment time frame for consumers to sign up for Obamacare has been cut back by 50%; the budget for navigators to help explain to clients the different ACA (Obamacare) policies has been cut by 60%; and the lack of IRS enforcement of  the mandate penalty if consumers fail to purchase health insurance.  The president’s administration has even cancelled special events set up to explain the ACA to groups of peoples sponsored by non profit organizations.

This past week in October 2017, the president signed an executive order intended to allow small businesses and potentially individuals to buy a long-disputed type of health insurance that skirts state regulations and (ACA) Affordable Care Act / Obamacare protections. This means that healthy young peoples will be able to purchase flimsy health insurance policies for less monies. This will lead to the less healthy folks purchasing comprehensive health insurance policies which will become much more expensive. As it becomes too expensive, consumers stop purchasing these policies and then ” the death spiral” ensues.

Please keep in mind that the cutting of these subsidies will save billions of dollars over the next ten years, that republicans are desperate to have in order to help pay for their tax cut plans.

The president is suffering from the delusion that Americans will blame the democrats for the demise of Obamacare. “We the people” are well aware that the president along with most republican legislators have been in the process of killing Obamacare, anyway they can. They will own the increases in premiums, deductibles and its eventual implosion. 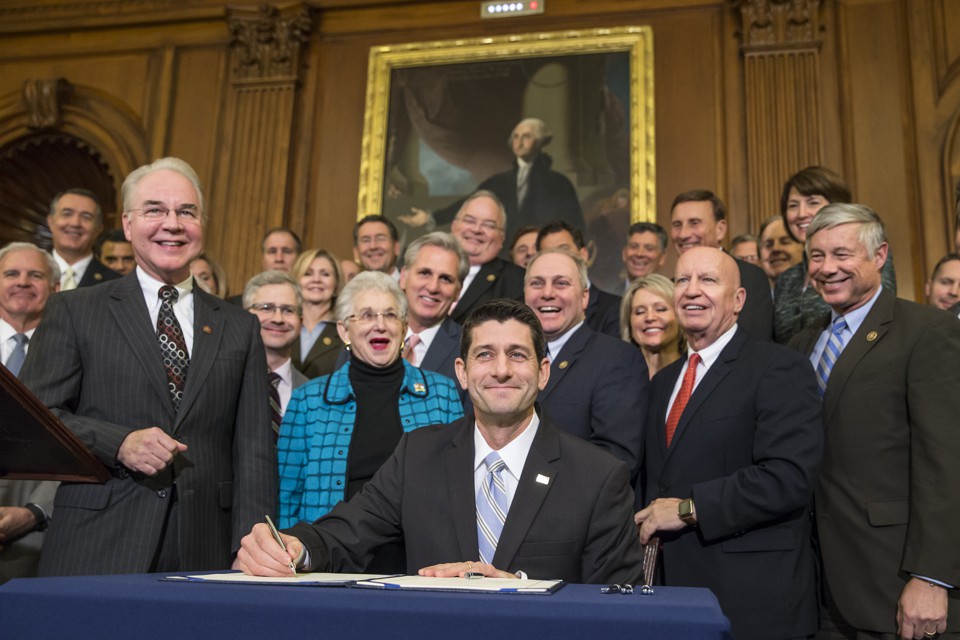 “President Trump will scrap subsidies to health insurance companies that help pay out-of-pocket costs of low-income people, the White House said late Thursday. His plans were disclosed hours after the president ordered potentially sweeping changes in the nation’s insurance system, including sales of cheaper policies with fewer benefits and fewer protections for consumers.” 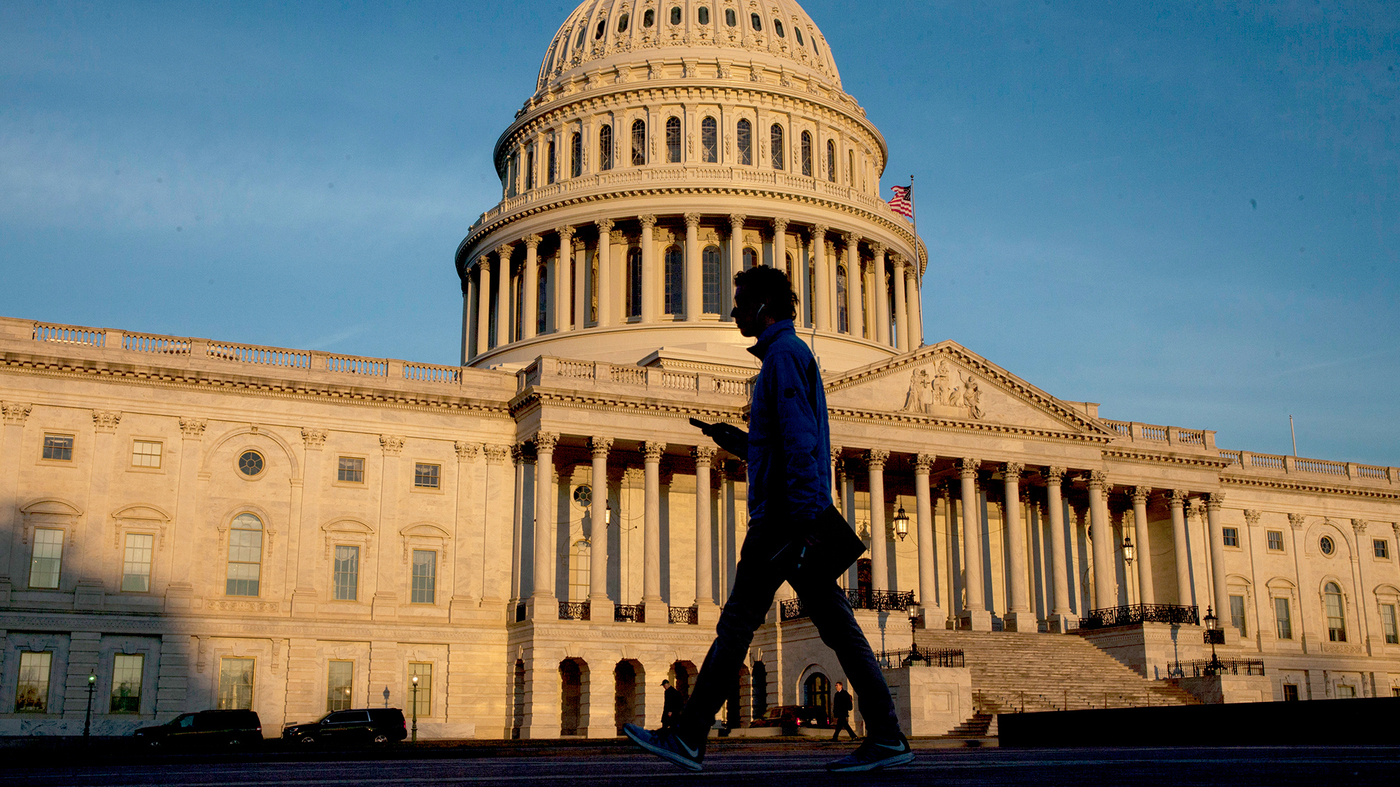 “The twin hits to the Affordable Care Act could unravel President Barack Obama’s signature domestic achievement, sending insurance premiums soaring and insurance companies fleeing from the health law’s online marketplaces. After Republicans failed to repeal the health law in Congress, Mr. Trump appears determined to dismantle it on his own.”

“The government cannot lawfully make the cost-sharing reduction payments,” the White House said in a statement.”

“It concluded that “Congress needs to repeal and replace the disastrous Obamacare law and provide real relief to the American people.”

“In a joint statement, the top Democrats in Congress, Senator Chuck Schumer of New York and Representative Nancy Pelosi of California, said Mr. Trump had “apparently decided to punish the American people for his inability to improve our health care system.”

“It is a spiteful act of vast, pointless sabotage leveled at working families and the middle class in every corner of America,” they said. “Make no mistake about it, Trump will try to blame the Affordable Care Act, but this will fall on his back and he will pay the price for it.” 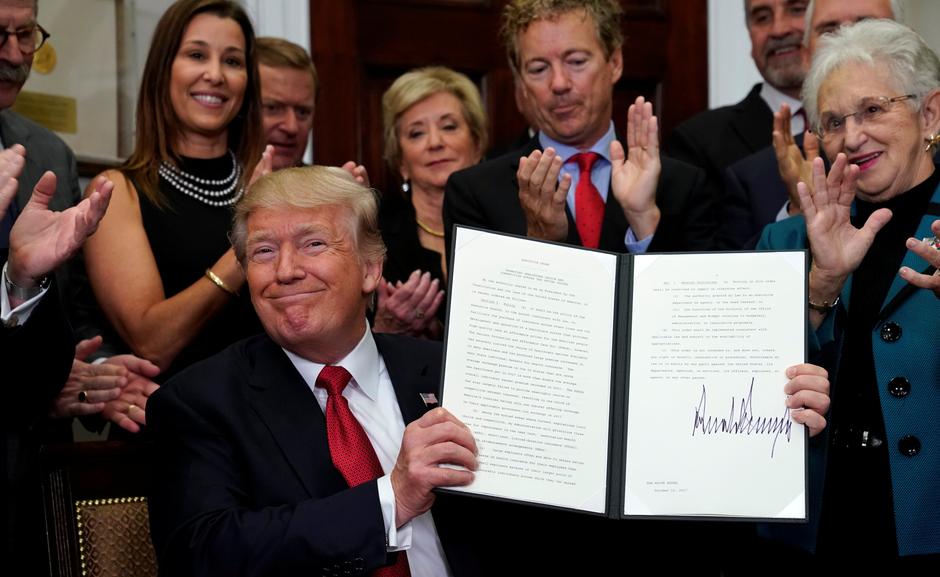 “Lawmakers from both parties have urged the president to continue the payments. Mr. Trump had raised the possibility of eliminating the subsidies at a White House meeting with Republican senators several months ago. At the time, one senator told him that the Republican Party would effectively “own health care” as a political issue if the president did so.”

“But Speaker Paul D. Ryan, Republican of Wisconsin, praised Mr. Trump’s decision and said the Obama administration had usurped the authority of Congress by paying the subsidies. “Under our Constitution,” Mr. Ryan said, “the power of the purse belongs to Congress, not the executive branch.”

“The future of the payments has been in doubt because of a lawsuit filed in 2014 by House Republicans, who said the Obama administration was paying the subsidies illegally. Judge Rosemary M. Collyer of the United States District Court in Washington agreed, finding that Congress had never appropriated money for the cost-sharing subsidies.”

“This summer, a group of states, including New York and California, was allowed to intervene in the court case over the subsidies. The New York attorney general, Eric T. Schneiderman, said on Thursday night (10/12/17)  that the coalition of states “stands ready to sue” if Mr. Trump cut off the subsidies.”

“Mr. Trump’s decision to stop the subsidy payments puts pressure on Congress to provide money for them in a spending bill.”

“Senator Lamar Alexander, Republican of Tennessee and the chairman of the Senate health committee, and Senator Patty Murray of Washington, the senior Democrat on the panel, have been trying to work out a bipartisan deal that would continue the subsidy payments while making it easier for states to obtain waivers from some requirements of the Affordable Care Act. White House officials have sent mixed signals about whether Mr. Trump was open to such a deal.”

“The decision to end subsidies came on the heels of Mr. Trump’s executive order, which he signed earlier Thursday (10/12/17).”

“With an 1,100-word directive to federal agencies, the president laid the groundwork for an expanding array of health insurance products, mainly less comprehensive plans offered through associations of small employers and greater use of short-term medical coverage.” 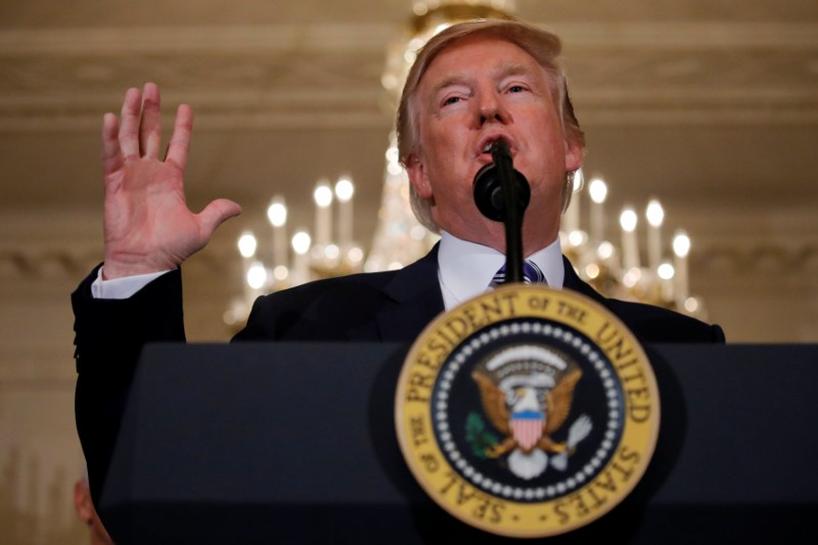 “It was the first time since efforts to repeal the landmark health law collapsed in Congress that Mr. Trump has set forth his vision of how to remake the nation’s health care system using the powers of the executive branch. It immediately touched off a debate over whether the move would fatally destabilize the Affordable Care Act marketplaces or add welcome options to consumers complaining of high premiums and not enough choice.”

“With these actions,” Mr. Trump said at a White House ceremony, “we are moving toward lower costs and more options in the health care market, and taking crucial steps toward saving the American people from the nightmare of Obamacare.”

“This is going to be something that millions and millions of people will be signing up for,” the president predicted, “and they’re going to be very happy.” 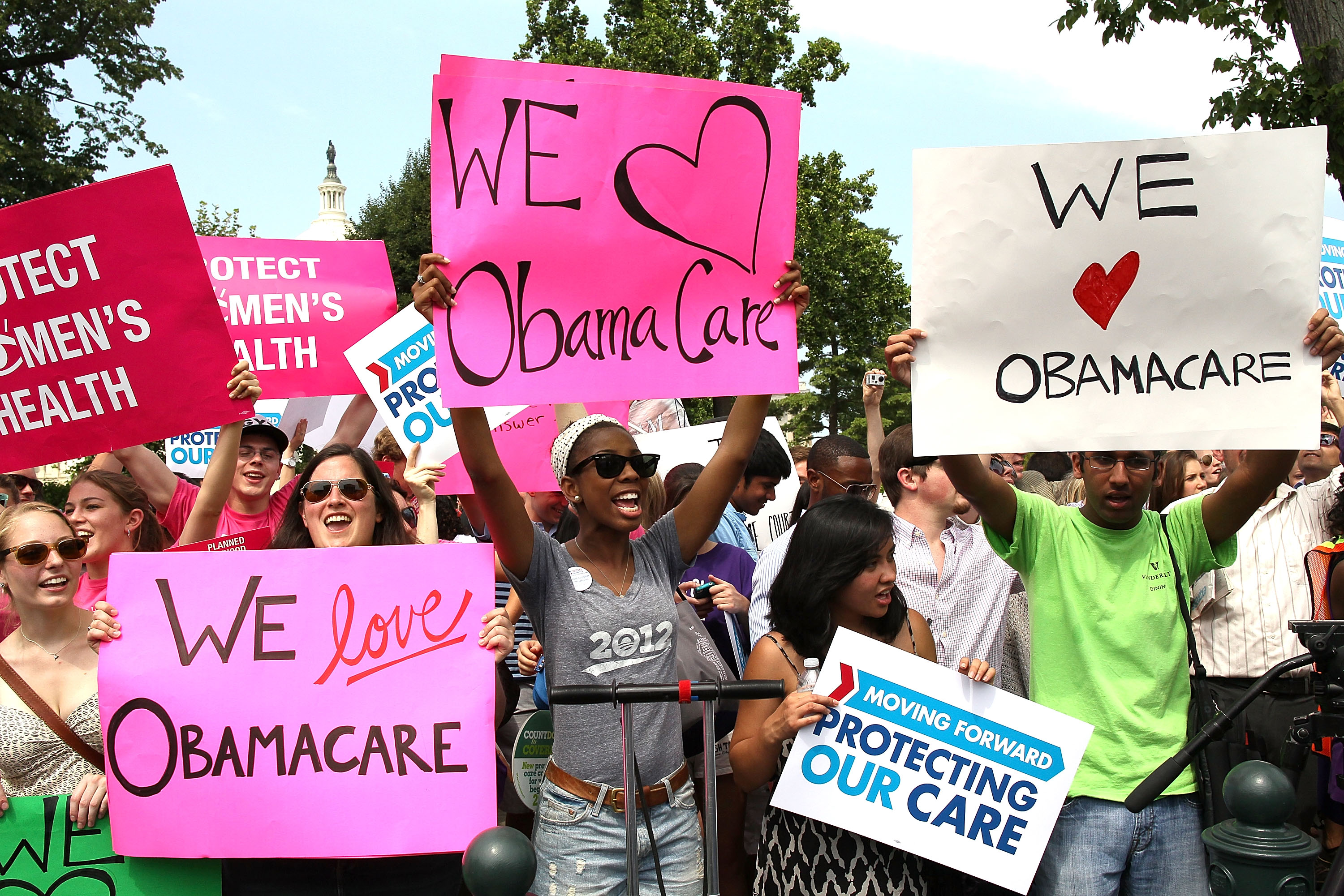 But many patients, doctors, hospital executives and state insurance regulators were not so happy. They said the changes envisioned by Mr. Trump could raise costs for sick people, increase sales of bare-bones insurance and add uncertainty to wobbly health insurance markets.

Chris Hansen, the president of the lobbying arm of the American Cancer Society, said the order “could leave millions of cancer patients and survivors unable to access meaningful coverage.”

In a statement from six physician groups, including the American Academy of Family Physicians, the doctors predicted that “allowing insurers to sell narrow, low-cost health plans likely will cause significant economic harm to women and older, sicker Americans who stand to face higher-cost and fewer insurance options.” 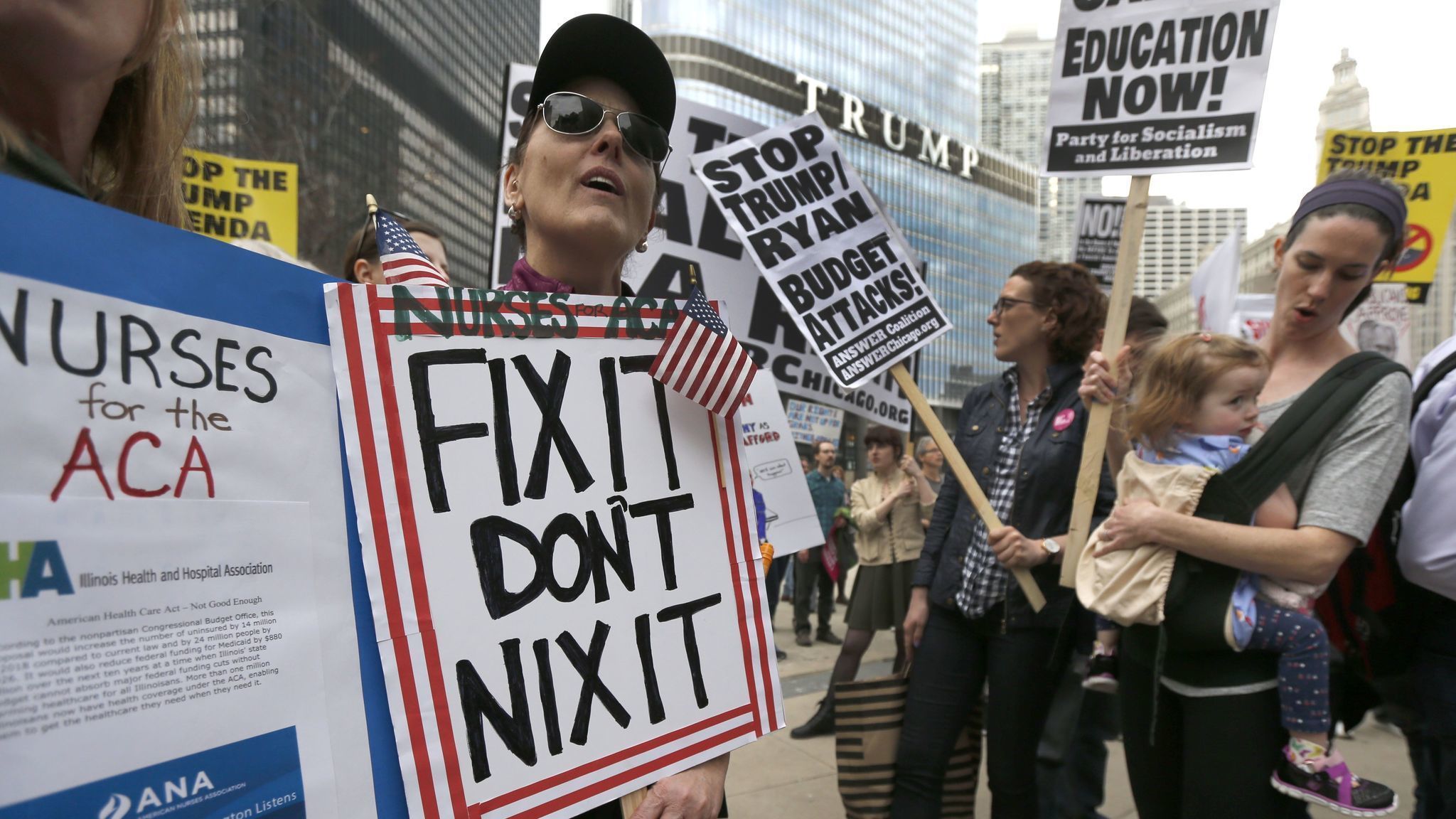 “The Affordable Care Act has expanded private insurance to millions of people through the creation of marketplaces, also known as exchanges, where people can purchase plans, in many cases using government subsidies to offset the cost. It also required that plans offered on the exchanges include a specific set of benefits, including hospital care, maternity care and mental health services, and it prohibited insurers from denying coverage to people with pre-existing medical conditions.”

“The executive order’s quickest effect on the marketplaces would be the potential expansion of short-term plans, which are exempt from Affordable Care Act requirements. Many health policy experts worry that if large numbers of healthy people move into such plans, it would drive up premiums for those left in Affordable Care Act plans because the risk pool would have sicker people.”

“Mr. Trump’s order would also eventually make it easier for small businesses to band together and buy insurance through entities known as association health plans, which could be created by business and professional groups. A White House official said these health plans “could potentially allow American employers to form groups across state lines.”

“Association plans have a troubled history. Because the plans were not subject to state regulations that required insurers to have adequate financial resources, some became insolvent, leaving people with unpaid medical bills. Some insurers were accused of fraud, telling customers that the plans were more comprehensive than they were and leaving them uncovered when consumers became seriously ill.”

“The White House said that a broader interpretation of federal law — the Employee Retirement Income Security Act of 1974 (ERISA)— “could potentially allow employers in the same line of business anywhere in the country to join together to offer health care coverage to their employees.”

“The order won applause from potential sponsors of association health plans, including the National Federation of Independent Business, the National Restaurant Association, the U.S. Chamber of Commerce and Associated Builders and Contractors, a trade group for the construction industry.”

“The White House released a document saying that some consumer protections would remain in place for association plans. “Employers participating in an association health plan cannot exclude any employee from joining the plan and cannot develop premiums based on health conditions” of individual employees, according to the document. But state officials pointed out that an association health plan can set different rates for different employers, so that a company with older, sicker workers might have to pay much more than a firm with young, healthy employees.”

“Two employers in an association can be charged very different rates, based on the medical claims filed by their employees,” said Mike Kreidler, the state insurance commissioner in Washington.”

“Within hours of his inauguration in January (2017), he ordered federal agencies to find ways to waive or defer provisions of the Affordable Care Act that might burden consumers, insurers or health care providers. In May, he directed officials to help employers with religious objections to the federal mandate for insurance coverage of contraception.”

“Both of those orders were followed up with specific, substantive regulations that rolled back Mr. Obama’s policies.”