The White Nationalists are sounding the alarms that “Antifa” will be reeking its form of terrorism throughout the nation. The hyperbole of “Civil War 2017” being marketed on Infowars and other right wing media sites are off the charts. The writers of these blogs are warning their followers to contact their local police to warn them.

What is really happening is that a left leaning group “Refuse Fascism” is planning to hold rallies throughout the country. Their goal is to unseat the current republican President Donald J. Trump.

Here is an Infowars headline. “INFOWARS DOGS: PATRIOTS PREPARE FOR ANTIFA’S NOVEMBER 4TH PROTESTS.” They are even advertising/ selling outfits with the ad, “New gear sends a message to Antifa.”

As per the 10/31/17 Daily Beast report, Alt-Right Frames Protesters as Pedophiles With Fake NAMBLA Sign, “When Columbia students denounced Mike Cernovich, a masked man jumped in front of them, raised a child molester banner, and the photo went viral. Even Trump Jr. liked it.”

UPDATE ON 11/6/17: As per  11/4/17 Newsweek report by Michael Edison Hayden, “The afternoon of November 4 arrived in midtown Manhattan like any other Saturday. Families breezed in and out of shops and restaurants along Fifth Avenue. Couples chatted on benches in Central Park, enjoying the crisp autumn air. You could easily be forgiven for not knowing that a protest billed Friday by Fox News as the “Antifa Apocalypse” was gathering on the south side of Times Square.”

“The so-called November 4 protests, which took place in cities across the country today, hosted by a nascent protest group called Refuse Fascism, will likely be remembered more for what they did not look like, than what they did. Far-right conspiracies had morphed the event into a fantasy world of unrealistic expectations. Antifa was going to start a civil war. Antifa-bred supersoldiers were going to behead white people in town squares across the country. These stories were pushed hard by far-right outlets like Alex Jones’ Info Wars and Gateway Pundit, feeding an engine of clickbait to build a mind-blowing but utterly meaningless news story almost entirely out of thin air.”

Man taking selfie in front of a scattered crowd of about 300 people near Times Square, New York for #Nov4ItBegins. No Antifa supersoldiers.

“In Times Square, by 2:30 PM, a half-an-hour after the New York City event was supposed to begin, a little more than 300 people showed up, according to NYPD officers tasked with securing it. Many of the signs Refuse Fascism had prepared sat stacked against a metal railing. Organizers handed out leaflets about the Revolutionary Communist Party, an older, radical group with ties to Refuse Fascism. Over a thousand people had previously committed to going to the November 4 protests on Facebook, and roughly five thousand had pledged interest, but when all was said and done, burgeoning leftist groups like Democratic Socialists of America (DSA), protest mainstays like Industrial Workers of the World (IWW) and the masked anarchists that had captured the imagination of people on the far right failed to attend.” 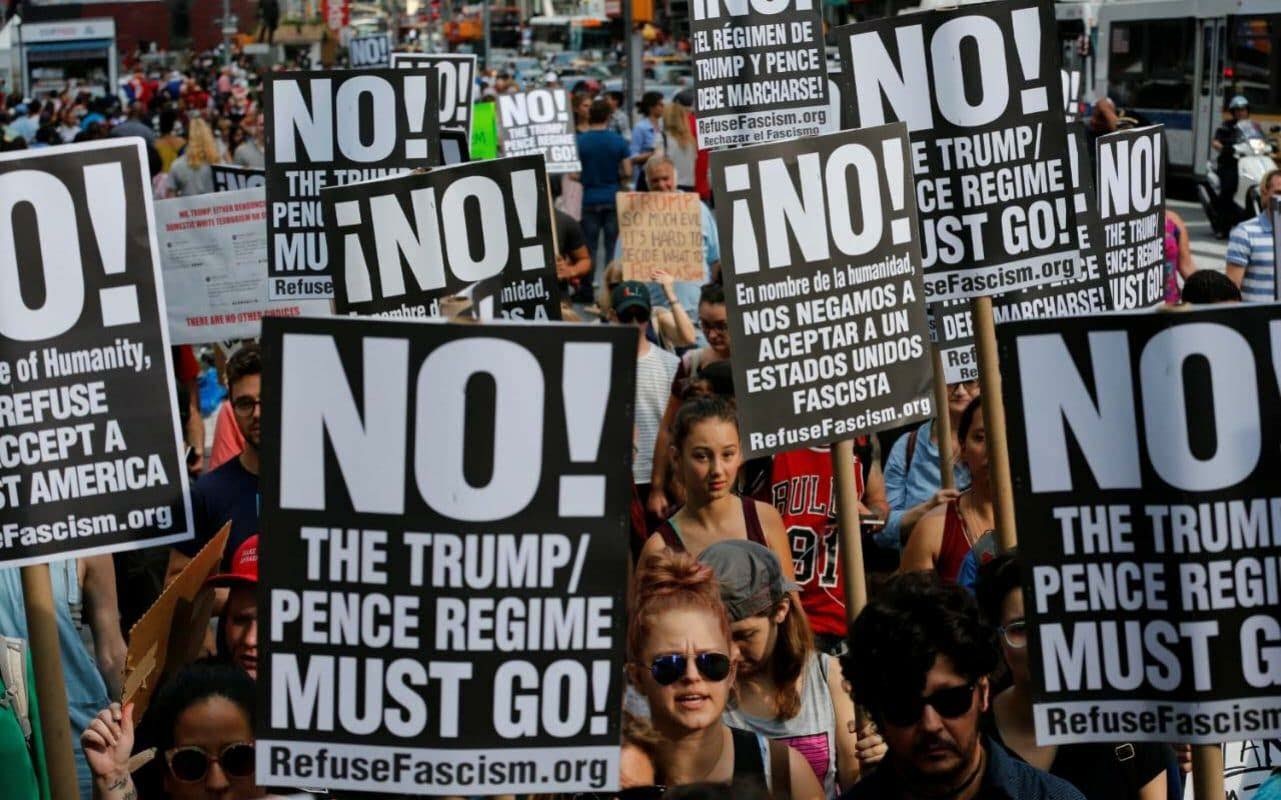 The Washington Post reported on the 11/4/17 rallies and this time even Snopes.com weighed in with some fact checking, declaring the right’s assertions that the left was planning a civil war, as FALSE.

On November 1, 2017, Kyle Swenson of the Washington Post penned the following report, “The antifa apocalypse is coming this weekend, if you believe the hype.”

“For anyone logging time on the far right corners of the Internet, this coming Saturday (11/4/17) is not just another autumn weekend but the potential start date of an apocalyptic  showdown.”

“Infowars has warned “Antifa Plans ‘Civil War’ to Overthrow the Government.” The John Birch Society put out two recent videos warning Americans to “stay home and tell your children to do likewise” on Saturday. “

“YouTuber “A Glock Fanboy” notched more than 400,400 views for a clip raising the alarm about “the first day of the revolution or whatnot.”“While Nov. 4 has become a rallying point on the conservative landscape — complete with a hashtag “civilwar2017″

“The left-leaning group Refuse Fascism is planning rallies across the country on Saturday, the first step in a large-scale, long game demonstration organizers hope will achieve nothing less than the unseating of the Trump administration.”

“We formed this organization around two main points,” Andy Zee, one of the group’s organizers, told The Washington Post. “One is that the nightmare must end, and second, in the name of humanity we must refuse to accept a fascist America.”

“Zee maintains that Refuse Fascism is committed to nonviolent protest, and scoffs at the ideas floating through the far right of antifa supersoldiers waging war on mainstream society. If anything, the jarring disconnect over Nov. 4 shows how easily facts are eaten alive by social media and regurgitated as conspiracy theory. The possible violence coloring that disconnect illustrates how truly ideologically isolated the two sides are from one another.”

“Zee’s group does have big plans for the weekend — and beyond. He tells The Post the group is organizing demonstrations on Saturday in more than a dozen locations, including New York City, Los Angeles, Seattle, and San Francisco.”

“The blueprint here, Zee told The Post, is the South Korean mass protest movement that began in October 2016 and eventually led to President Park Geun-hye’s removal from office last March. “What we are trying to unleash is a process of continuous protest,” Zee said. “We can’t just wait for the other shoe to drop. We’ve been saying from the beginning, with fascism, it can be too late.”

“Zee is admittedly less clear on what that peaceful regime change would look like in the United States. “Impeachment, the 25th Amendment, they will determine the means and ways when it becomes clear there is a tremendous crisis of confidence,” the organizer said. The key is sending the message.”

“That message, however, so far has largely been lost in translation online.”

(From the right) “The end game here is martial law,” one video warns, “is provoking Republicans, patriots, whatever, you and me, into this huge battle, whether it’s just fighting or whether it’s guns. What they will do is they will throw up their arms and say, ‘I told you so, they’re violent’ . . . They want us out there, with our weapons so the government will commence with martial law. And then, I believe, serious gun control-slash-confiscation.”

“Make sure you got enough ammo, make sure your guns are ready,” another poster advised in a clip with more than 110,000 views. “You have to understand these are vicious, vicious people. Your life means nothing to them. In fact, if you’re a white man, you don’t deserve to live.”

“Infowars provocateur Alex Jones announced in a video that antifa was “going to lose on November 4 and every day after that, because they’re a bunch of meth-head pieces of crap.”

“The organization is engaged with a broad coalition of groups, including the Revolutionary Communist Party, but they have committed to Refuse Fascism’s nonviolence stance.”

“On their website, Refuse Fascism also makes clear they see “NO moral ‘equivalence’ between those seeking to impose white supremacy and fascism, and those fighting against this nightmare.”

“Zee told The Post his group does “uphold the legal right to self-defense, but we don’t initiate violence and we oppose violence.”  He added violence would only feed into the negative image of the group. “We are not looking to get involved in that kind of situation,” he said. “We are in the fight for hearts and minds of people.”

“Still, the online hysterics over Nov. 4 have put the demonstrations in the potential the crosshairs of extremists.”

“Its utter lunacy on these sites. If you read their stuff, and people are believing it,” the organizer added. “They are calling for people to bring their weapons to the demonstrations. We just have to outnumber them.”

11-04-2017 Antifa and other communist terrorist groups are going to wage war on our president and the American People. #CivilWar2017 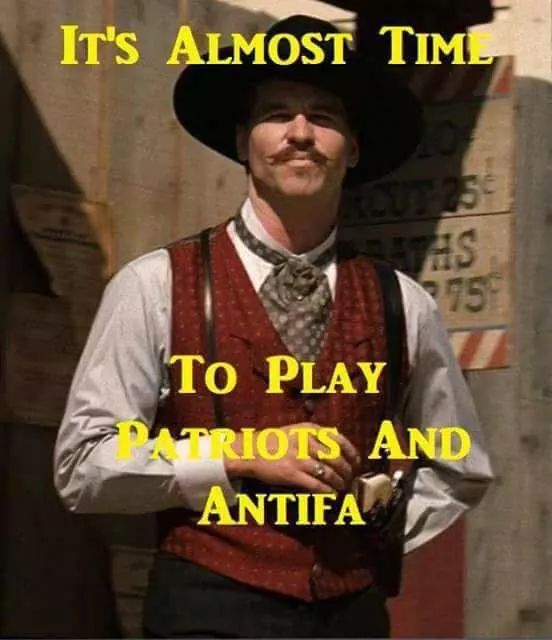 PLEASE Contact ur state police! Tell them ANTIFA and other terrorist groups are converging to attack on Nov 4! #CivilWar2017#Nov4ItBegins