The republicans in the US Congress are at it again. They are gleeful with joy. They have figured out how to render a major blow to Obamacare while garnering a savings of over $380 billion dollars which allows them to get more republican votes to push through their tax cutting plans promised to corporations and their rich friends.

They have formulated a tax cut plan that would  eliminate the Obamacare mandate which requires peoples without healthcare to purchase it or pay a fine. In the insurance industry this element is crucial as with home insurance or car insurance. The insurance business is based on the law of numbers. With health insurance, it benefits all the policy holders if a lot of younger healthy individuals sign up to keep the costs down for everyone. Without the Obamacare mandate the younger healthy folks will gamble on not getting seriously ill and not sign up. Because of this proposal, the Congressional Budget Office (CBO) estimates that 13 million consumers will drop their insurance policies purchased through the Obamacare marketplace and that premiums will be increased by 10 %.

The republican legislators are touting their tax cut plans as being a tax savings boon for the middle class but that is a big fat lie.

What is  becoming clear is that many of the benefits for the middle class dwindles over time, while companies and wealthy individuals enjoy lasting, permanent tax advantages.

As per a 11/2/17 Chicago Tribune by Josh Boak, “With the details they’ve presented to us so far, it looks like the tax cut benefits the wealthy and major corporations,” said Martin Sullivan, chief economist at Tax Analysts and a former staff economist at the Treasury Department. “In fact, if you have a large family, given the facts that we have now, that you would pay more in taxes.”

“A married couple making less than $90,000 would be taxed at a 12 percent rate, instead of the current 15 percent. The size of their standard deduction would nearly double to $24,000.”

“But that same couple would lose personal exemptions — deductions that largely benefit families with multiple children. The child tax credit would rise to $1,600 from $1,000 — short of the $2,000 that Sullivan said would be needed to make many families whole.”

“The tax plan would also repeal the deduction of substantial medical costs, including what families might spend on nursing home care. Nor could people with student loans deduct the interest paid on the debt anymore.”

“And the plan would cap the deduction of state and local taxes. It also would use a less generous measure of inflation, so that more middle class taxpayers would creep into a higher bracket over several years.”

“All told, nearly 70 percent of the tax cuts would go to businesses over 10 years, according to an analysis by the Committee for a Responsible Federal Budget. The rest of the tax cuts appear to favor the wealthy.”

“Senate Republican leaders moved Tuesday (11/14/17) to include a repeal of the Affordable Care Act’s individual mandate in their tax bill, a major change of strategy as they try to accomplish two of their top domestic priorities in a single piece of legislation.”

“They also announced that the individual tax cuts in the plan would be made temporary, expiring at the end of 2025 to comply with Senate rules limiting the impact of legislation on the long-term deficit. A corporate tax cut, reducing the rate from 35 to 20 percent, would be left permanent.””

“Repealing the mandate, which compels most Americans to buy health insurance or pay a fine, would free up more than $300 billion in government funding over the next decade that Republicans could use to finance their proposed tax cuts, but it would result in 13 million fewer people having health insurance, according to projections from the nonpartisan Congressional Budget Office.” “The CBO has also projected that repealing the individual mandate would drive up insurance premiums for many Americans by roughly 10 percent.”

“Eliminating the individual mandate and having far fewer people signed up for insurance saves money because many of those people receive federal subsidies to buy coverage. Senate leaders are using those savings to address the concerns of anxious members from across their caucus who complained that the tax plan’s benefits for the middle class were too modest compared with benefits received by the wealthy and corporations.”

“Changes to the bill released Tuesday night by the Senate Finance Committee indicated that the savings would be used in part to allow individuals to claim a larger $2,000 child tax credit, a priority of Ivanka Trump, the president’s daughter. They would also be used to modestly reduce income tax rates for middle-income taxpayers.”

“Senate Republicans also are seeking to deliver expanded benefits to “pass-through” firms that send profits to their owners to be taxed as individual income.”

“At the same time, by making the individual income tax cuts temporary, Senate leaders are seeking to ensure that the bill does not violate the chamber’s rules that prohibit legislation passed with fewer than 60 votes from raising the deficit after 10 years.”

“But while solving some problems, the changes Tuesday threaten new political problems of their own.”

“The attack on former president Barack Obama’s signature legislative achievement is likely to rule out the already slim possibility of support from Democrats, and the prospect of adding millions to the ranks of the uninsured could trouble moderate Republicans who voted down previous repeal efforts.”

“Sen. Susan Collins (R-Maine), one of the Republicans who opposed earlier attempts to roll back the health-care law, said Tuesday that including the repeal measure “complicates” the tax effort. But she suggested she might be able to support it if the Senate also passes a bipartisan bill to preserve other aspects of the Affordable Care Act.”

“Sen. John McCain (R-Ariz.), who along with Collins and Sen. Lisa Murkowski (R-Alaska) voted down an Affordable Care Act repeal effort this summer, declined to say whether he would back a tax bill that included repeal.”

“I want to look at the bill in its entirety before you start plucking out parts of it to see whether I support it or not,” he said Tuesday in the Capitol.”

“Republicans control 52 votes of the 100-seat Senate, so the defection of three members would imperil any changes to the bill. Republicans are trying to pass the tax-cut bill through a process known as reconciliation, which requires only 50 votes — plus a tiebreaking vote from Vice President Pence — to pass the bill.” 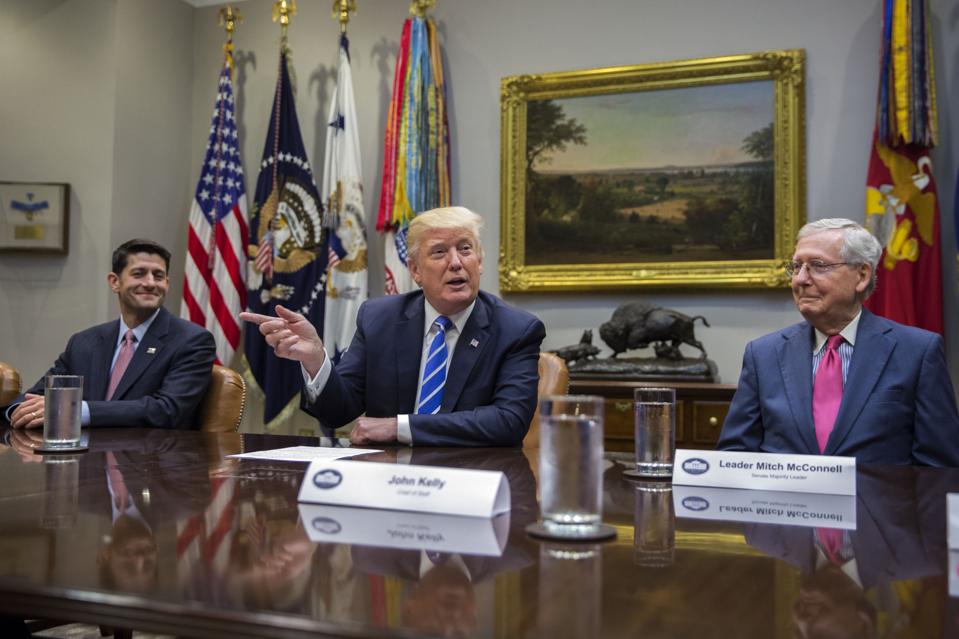 “The Senate Finance Committee hopes to move a bill to the full Senate floor this week, with the entire chamber voting on it after Thanksgiving. The House plans to vote on its own version of the bill — which does not contain the individual mandate repeal or the sunsetting of the individual tax provisions — this week.”

“Senators concerned about restraining national debt — long one of the top goals for the GOP — may also raise howls about the plan to sunset the individual income tax cuts in 2025. Congress is unlikely to allow a large tax increase on taxpayers at that point, which could mean a big hit to the deficit over the long run.”

“Repealing the individual mandate would undermine the Affordable Care Act’s system for attempting to get low-income people and other individuals into private health insurance plans. The health-care law banned insurance companies from discriminating against people with preexisting health conditions. But to prevent people from waiting to buy insurance until they got sick, the law also imposed financial penalties for individuals who did not maintain coverage.”

“A powerful group of stakeholders, including the major health insurance and hospital insurance lobbies and two influential doctors’ groups, wrote a letter to leaders of both parties arguing that they should retain the individual mandate.”

“Broadly, both the Senate bill and House bill would sharply cut the corporate tax rate and cut income tax rates for individuals, while seeking to finance those cuts by eliminating or scaling back some popular tax deductions. What the deduction rollbacks don’t cover would be financed by $1.5 trillion in deficit spending over a decade.”

“The House and Senate bills would lower taxes for many Americans, but nonpartisan analysts have concluded that the elimination of certain deductions would have millions pay higher taxes, particularly if they live in states such as New York, New Jersey or California.”

“The House and Senate must pass matching versions of the tax-cut bill for Trump to be able to sign them into law. The House bill does not include a repeal of the individual mandate.”

“But House GOP aides who were not authorized to speak publicly on the internal discussions said GOP leaders are loath to make such a major change to the bill at this late stage and prefer to see whether the Senate could pass a bill with the repeal provision before bringing the issue up in the House.”

“In the Senate, the sudden shift in the tax bill threatens to undermine a compromise health measure negotiated between Sens. Patty Murray (D-Wash.) and Lamar Alexander (R-Tenn.). The agreement would resume payments that help low-income Americans afford health insurance, which the Trump administration halted in October.”

To win support for the updated tax bill, the Senate could take up the Alexander-Murray bill alongside it, according to Sens. John Thune (R-S.D.) and Bob Corker (R-Tenn.). The bills cannot be combined under the rules of reconciliation.”

“Senate Minority Leader Charles E. Schumer (D-N.Y.) said including a repeal of the mandate in the tax bill would torpedo Democratic support for the Murray-Alexander compromise.”

“And Murray, the top Democrat on the Senate Health, Education, Labor and Pensions Committee, told reporters she was stunned that Republicans would again seek to undo the Affordable Care Act.”

“The elections last week clearly showed that the American people are paying attention, and they don’t want their health care taken away,” Murray said, referencing a string of state-level elections in Virginia, New Jersey and elsewhere in which Democrats trounced Republicans.”

Washington Post’s Fact Check On President’s Claims About US ...https://grondamorin.com/11/12/17