The NJ Senator Bob Menendez has been undergoing a federal trial for corruption done while he was in office. The US government attorneys believed they had built a solid case against him to where they had charged him with 18 separate criminal counts including bribery and lying to federal law officers.

In short, Senator Menendez has a best friend, the eye doctor. They have known each others for many years, visited each others houses frequently and took trips together. The wealthy eye doctor was generous with gifts, and when the eye doctor needed a favor, Bob Menendez did his best to help. Each incident, taken alone, do not arise to anything of a  criminal nature but over time, a pattern emerges where government officials became convinced, that the legal line had been crossed.

Today, on November 16, 2017, the judge declared a mistrial as the jury of 12 could not decide whether his actions were criminal or not. This will be a relief for the democrats in the US Senate. If the senator had been found guilty, eventually the NJ republican Governor Chris Christie could have appointed a republican replacement. For now, his senate seat will remain in democrats’ hands.

The jurists were polled for how they were leaning. Ten said they wanted to declare Senator Menendez, “not guilty,” and 2 were convinced of his “guilt.”

On November 16, 2017, Alan Maimon and Devlin Barrettof the Washington Post penned the following report, “Menendez jury says again that it is deadlocked.”

“The bribery trial of Sen. Robert Menendez (D-N.J.) (was) headed for a mistrial Thursday (11/16/17), after the jury said for a second time it cannot reach a verdict on any of the counts against him.” 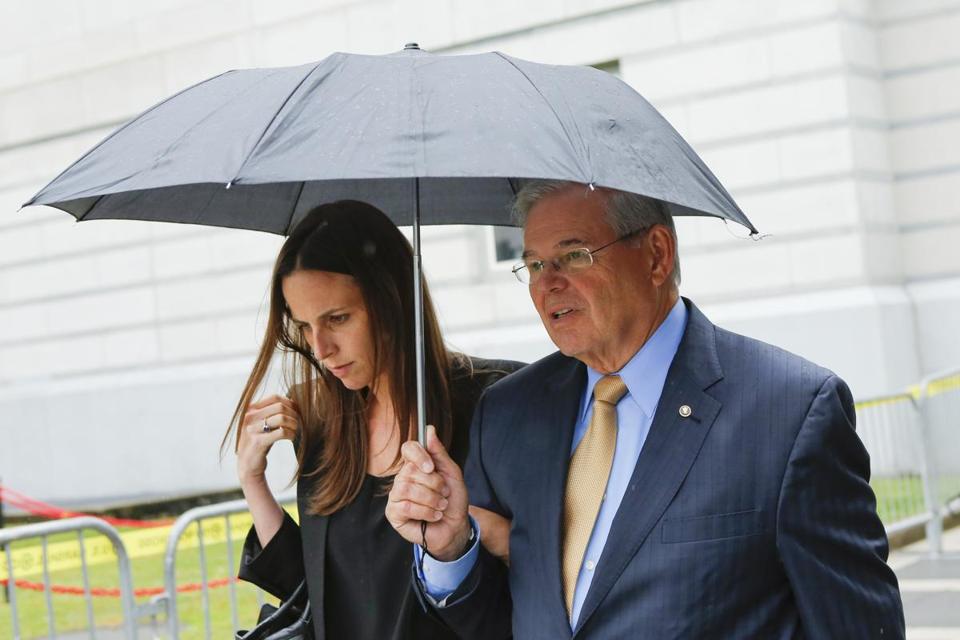 “A mistrial would be a temporary victory for the senator, and a setback for Justice Department efforts to prosecute alleged public corruption.”

“After nine weeks of testimony, the jury has struggled to reach a consensus on any of the charges against Menendez and his co-defendant, a wealthy Florida eye doctor.”

“On Monday afternoon (11/13/17), the jury first sent a note saying they were unable to reach a verdict. U.S. District Judge William Walls sent them home early for the day, telling them to come back fresh and try again.”

“I realize you are having difficulty reaching a unanimous decision, but that’s not unusual,” Walls told the panel Tuesday morning. He said jurors should decide the case for themselves but shouldn’t hesitate to re-examine their views.”

“Since the jury has now twice said it is deadlocked, the judge may decide it is time to give them a special instruction called an Allen charge – lawyers sometimes call it a “dynamite charge” – meant to be a final attempt to break a deadlocked jury. Typically such a jury instruction is given after a jury has made clear it is stuck on all counts at a trial. If a jury still insists it is locked even after an Allen charge, a mistrial may be declared.”

“Menendez attorney Abbe Lowell has argued jurors should not feel “coerced to compromise,’’ and has asked the judge repeatedly to declare a mistrial, based on the deadlock notes and other legal and procedural issues.”

“Faced with 18 separate counts of alleged wrongdoing, including bribery and lying on government financial forms, the panel of 7 women and 5 men seem to be unable to find unanimity on a single count.”

“(If a mistrial occurs), the Justice Department would likely feel significant internal pressure to re-try the senator, because recent Supreme Court decisions have raised questions about how much legal authority prosecutors still have in pursuing corruption charges involving payments not explicitly and directly linked to official acts. Some legal experts have warned that a defeat for the government in the Menendez case could lead to a significant scaling back of Justice Departments efforts to fight public corruption.”

Menendez was accused of taking gifts from the eye doctor, Salomon Melgen, like a luxury hotel stay, private jet flights, and campaign donations, in exchange for which he tried to help Melgen get U.S. visas for his girlfriends, intervened in the doctor’s $8.9 million billing dispute with Medicare, and assisted with a port security contract of the doctor’s in the Dominican Republic.