This JCT analysis is the rosiest scenario of the main resources that I have reviewed when compared to the recent non-partisan CBO Congressional Budget Office numbers where the republican President Donald Trump appointed its head; and the Tax Policy Center (TPC), a moderately liberal source. ( Other resources: the nonpartisan Committee for a Responsible Federal Budget, Fix the Debt and The Concord Coalition.)
The republicans in the US Congress and the White House have kept consistently on message that the tax-cuts in total will not cost more than 1.5 trillion dollars. They fail to mention that this is a net number that they had agreed to in their budget process which then allows them to pass their tax cut bill by a simple majority in the US Senate of 51 votes versus the normal requirement of 60+ votes for passage. This 60+ vote requirement would be mission impossible, as no democrat would ever vote for this monstrosity of a tax cut bill.

In the past, the republicans would at least put on a show of being outraged to be accused of having contempt for the poor and for blaming them for their status in life.
See MSNBC’s video on this issue: Senators Orrin Hatch & Sherrod Brown Get In Tax Reform … – YouTube
But along comes  the chairman of the US Senate Judiciary Committee, republican  Senator Chuck Grassley of Iowa who publicly voices his disdain for the poor by stating words along the lines, “no tax cuts for working people because they blow them on “booze or women.” 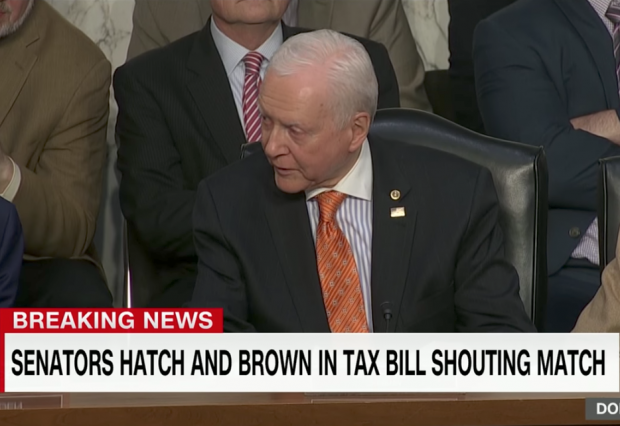 And then Senator Orrin Hatch of Utah showed his true bona fides…
As per a 12/3/17 VOX report by Emily Stewart, “This week, Senator Orrin Hatch (R-UT) helped push a tax bill through the Senate that will cost about $1 trillion. At the same time, he lamented the difficulties of finding the money to fund the Children’s Health Insurance Program (CHIP), which pays for healthcare for nine million children and costs about $14 billion a year — a program Hatch helped create.”
“But, he continued, “I have a rough time wanting to spend billions and billions and trillions of dollars to help people who won’t help themselves, won’t lift a finger and expect the federal government to do everything.” He blamed a “liberal philosophy” for creating millions of people “who believe everything they are or ever hope to be depend upon the federal government rather than the opportunities that this great country grants them.”
Here’s the rest of the story….
As per a 12/3/17 Politico report by Brent D. Griffiths, “Grassley chairs the Senate Judiciary Committee and is a previous chairman of the and current member of the Senate Finance Committee, an influential panel that played a major role in writing the chamber’s plan. The seven-term senator was being interviewed for a Des Moines Register report on the impact of the estate tax.

In the interview, he said “I think not having the estate tax recognizes the people that are investing,” Grassley (R-Iowa) told the Des Moines Register, “as opposed to those that are just spending every darn penny they have, whether it’s on booze or women or movies.”

“Republicans have long attacked the estate tax, often referring to it as the “death tax,” and their various tax plans would greatly scale it back or eliminate it. The tax is based on the transfer of property when someone dies, if an estate exceeds a certain amount. The Des Moines Register report determined that few family farmers or small business owners end up having to pay the estate tax and those who do pay are rarely forced to sell their land or quit farming.”“The Senate’s plan, which passed early Saturday morning (12/2/17), expands the individual exemption to $11 million per person, while the House plan would expand the exemption by the same amount but also eliminate the tax entirely in 2024. That is one difference in the bills that would have to be reconciled as the legislation moves forward.”

As per a December 3, 2017, Shareblue Media report by Tommy Christopher,  “The Republican tax scam is bad enough without people like Sen. Chuck Grassley opening their mouths to boot.”
“The Republicans passed their destructive and hugely unpopular mess of a tax scam bill by the skin of their teeth Friday night, and it appears to be headed to Donald Trump’s desk if they can get it out of conference.”

“The damage this bill could do to the country is extensive, but so is the political damage the GOP will face for passing it in the face of so much resistance.”

” Republicans have already made few bones about the fact that this bill was basically a payoff to their wealthy donors, but Iowa Sen. Chuck Grassley took things to another level when he openly displayed the contempt for ordinary Americans that is the beating heart of his party’s politics.”
“Grassley’s attitude explains a lot about Republicans, but it certainly doesn’t reflect the experience of average Americans, who actually spend their money on things like cancer treatments and child care and putting their kids through college.”

On November 17, 2017, Alicia Parlapiano of the New York Times penned the following report, Would the Poor Pay More Under the G.O.P. Tax Plan? Senators Disagree, and Here’s Why.

“Democrats and Republicans are at odds over an analysis of the Senate tax bill that found that low-income taxpayers would receive a tax increase under the plan.”

“Republicans called it misleading, saying that the increases reflect tax credits that would no longer be claimed because of the repeal of the Affordable Care Act’s individual mandate, the requirement to buy health insurance.”

“Congress’s Joint Committee on Taxation (Conservative leaning resource favored by republicans), which published the report, released a separate analysis that does not include the effects of the repeal.”

“The reason that estimated tax rates are higher when the repeal is considered is because without a requirement to purchase health insurance, many would choose not to buy coverage. As a result, those without insurance would forgo the federal tax credits available to subsidize their insurance premiums.”

“Republicans, and some tax experts, say the choice to not take a tax credit is not an increase in tax burden and therefore should not be considered a tax increase.”

“Without the effects of the A.C.A. changes, average tax rates would initially fall for all income groups under the Senate plan. But the individual tax cuts are temporary, expiring at the end of 2025 in order to keep the plan within budget limits under Senate rules. (Corporate tax cuts in the bill do not expire, which explains the differences after 2025.)”

“Even if analysis that includes the effects of the individual mandate repeal overstates the tax increase that low-income people would face, it leaves out other consequences of the repeal.”

The Congressional Budget Office projects that premiums would rise by 10 percent for most years over the next decade, and some middle-income households who do not qualify for premium subsidies would drop their plans because they would no longer be able to afford insurance.