aside Dear Republicans, Stop Lying To Your Voters about Your Tax Cut Bill / 2017 Donor Relief Act

Dear Republicans in the US Congress, stop the lies. It is bad enough that we have come to expect this from your standard bearer, President Donald Trump whom you help catapult into the White House but seeing you follow in his foot steps, is demeaning to the honor you have been blessed with by those taxpayers who voted for you and who deserve better. NO, you cannot keep repeating the lies as per the “Art of the Deal” where peoples will finally buy this act.

When you look into the TV cameras and state with a straight face that you will be passing your consensus tax cut bill by Christmas 2017, as it will spur the creation of better paying jobs because with the lower corporation tax rates, the corporations will invest in their businesses which will lead to more jobs. We know this is an outright lie because major CEO’s have told us this.

When you tell us that every middle/ class poor person will benefit from a tax cut, we know that you are conning us. We all know that those of us earning less than $75,000 annually, will see nominal tax cuts at least for the first couple of years. But because we have also read the reports by numerous credible tax analysis entities, indicating that every benefit that you all have granted in your tax cut bill to the middle/ poor class will be disappearing by 2025,  we also are well aware that we will be stuck with the bill of the largest tax increase in US history to the tune of about $4.5 trillion dollars.

After all your obvious lies to us, you want us to believe you when you explain that all these tax cuts that will disappear can be extended at a later date. Why do we not buy this poppycock when we can figure out that you will have a tough time adding an additional $4.5 trillion to the US deficit within a ten year period?

We have discounted your lies already that this tax cut plan will spur economic growth to where it will pay for itself with increased revenues and thus that you will not be adding a significant burden to the US deficit by 2027.

We know this because every credible tax analysis has confirmed your lie with the following data:

AS PER 12/1/17 NY TIMES REPORT:“In the Congressional Budget Office’s analysis of the Senate tax bill, the cuts would add $1.414 trillion to the deficit by 2027. That estimate does not include the amount that would be offset by the economic growth spurred by tax cuts.”

Senate Republicans’ $1.5 trillion tax cut would not pay for itself, according to a report released recently by the nonpartisan Joint Committee on Taxation. The report is a significant setback for Republicans, who have asserted that the tax cuts would grow the economy enough to cover the cost of the plan.

Oh wait, you want us to believe that you will not be looking to cut entitlement programs in the near future like social security, Medicare and Medicaid with the excuse of your getting religion to where you will now become serious about reducing the deficit?

We all have noted that you have been are mum on the subject of the “PAYGO” statute passed in 2010. The pay-as-you-go rule, also known as PAYGO, was designed to make Congress offset the cost of any legislation that increases spending on entitlement programs or reduces revenues so it doesn’t expand the deficit. Under PAYGO, Congress must pay for such legislation by reducing other entitlement spending or increasing other revenues. No, we do not believe that this statute will get fixed.

Then there is that lie that some of you actually care about millions of Americans losing access to affordable health care insurance. Then why are you not up in arms about your tax cut bill dealing a major blow to the viability of the Affordable Care Act by repealing the mandate, a requirement that most Americans have health insurance or pay a penalty. You have been informed by your own tax experts that with this provision, about 13 million peoples will end up not having health insurance and that premiums will be increased by 10%. This cost/tax will offset any nominal tax relief you are claiming to deliver to your voters.

In summary, the republicans’ well-funded misinformation campaign that seeks to convince low- and middle-income taxpayers that top-heavy tax cuts will benefit them,  is being rejected by the vast majority of peoples as the Republican leadership’s snake oil. “We the people” may not be tax policy wonks but we know dubious trickle-down economic promises when we see them.

There is a reason that as per the latest Quinnipiac Poll, that only 26% of the peoples approve of your tax cut plan.

On December 15, 2017, Michael R. Bloomberg penned the following report for Bloomberg, “This Tax Bill Is a Trillion-Dollar Blunder.”

“Last month a Wall Street Journal editor asked a room full of CEOs to raise their hands if the corporate tax cut being considered in Congress would lead them to invest more. Very few hands went up. Attending was Gary Cohn, President Donald Trump’s economic adviser and a friend of mine. He asked: “Why aren’t the other hands up?”

“Allow me to answer that: We don’t need the money. “ “Corporations are sitting on a record amount of cash reserves: nearly $2.3 trillion. That figure has been climbing steadily since the recession ended in 2009, and it’s now double what it was in 2001. The reason CEOs aren’t investing more of their liquid assets has little to do with the tax rate.”

“CEOs aren’t waiting on a tax cut to “jump-start the economy” — a favorite phrase of politicians who have never run a company — or to hand out raises. It’s pure fantasy to think that the tax bill will lead to significantly higher wages and growth, as Republicans have promised. Had Congress actually listened to executives, or economists who study these issues carefully, it might have realized that.”

“Instead, Congress did what it always does: It put politics first. After spending the first nine months of the year trying to jam through a repeal of Obamacare without holding hearings, heeding independent analysis or seeking Democratic input, Republicans took the same approach to tax “reform” — and it shows.”

“The Treasury Department claimed to have more than 100 professional staffers “working around the clock” to analyze the tax cut. If true, their hard work must have been suppressed. The flimsy one-page analysis Treasury released — which accepts the White House’s reality-defying economic projections in order to claim that the tax cuts will pay for themselves and then some — is a politically driven document that amounts to economic malpractice. So does the bill itself.”

“The largest economic challenges we face include a skills crisis that our public schools are not addressing, crumbling infrastructure that imperils our global competitiveness, wage stagnation coupled with growing wealth inequality, and rising deficits that will worsen as more baby boomers retire.”

“The tax bill does nothing to address these challenges.” THINGS ARE MADE WORSE

“EDUCATION: The bill, by limiting the deduction for state and local taxes, will make it harder for the localities to raise money for education. The burden will fall heaviest on cities with poor students, making it harder for millions of children to escape from poverty — and leaving more and more businesses with fewer qualified job applicants.”

“INFRASTRUCTURE: Restricting state and local tax deductions will also mean less local investment for infrastructure, and by raising deficits, the bill will constrain federal infrastructure spending. Our airports, railways and roads are in desperate need of modernization, and our energy grids are vulnerable and inefficient. Yet spending on those and other needs, which acts as a catalyst for private investment, will become more difficult.” 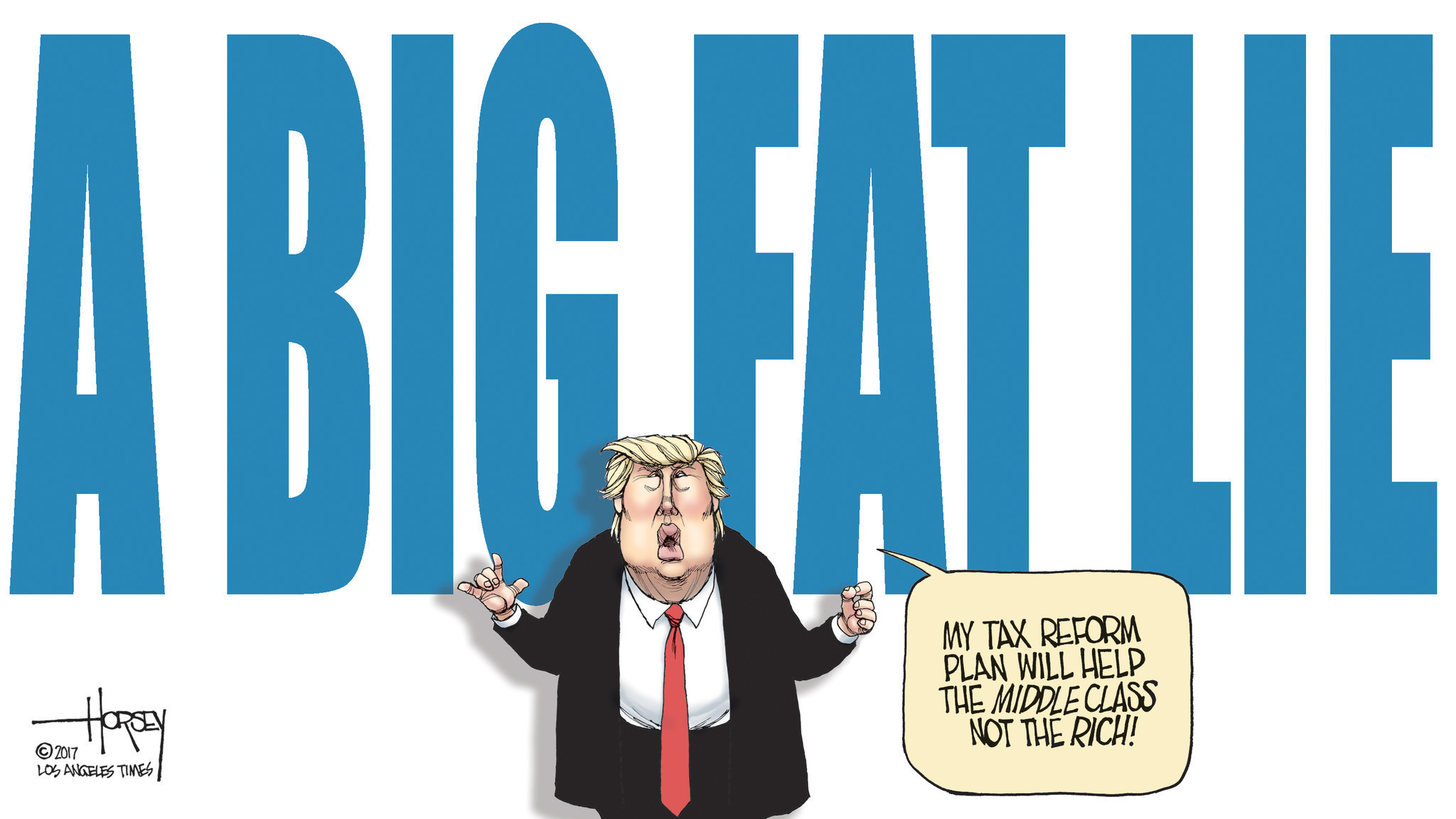 “INEQUALITY: If Congress wanted to raise real wages and reward work, there is a simple and proven way to do it: expand the earned income tax credit. Instead, it seems to believe that lower corporate tax rates will magically lead to higher wages, which fundamentally misunderstands how labor markets work.”

“In addition, by eliminating the requirement that individuals buy health insurance, many young and healthy people will drop out of the marketplace, causing health insurance premiums to rise for everyone else. This is nothing more than a backdoor tax increase on health care for millions of middle-class families that will leave them with less disposable income for savings, investment and spending.” 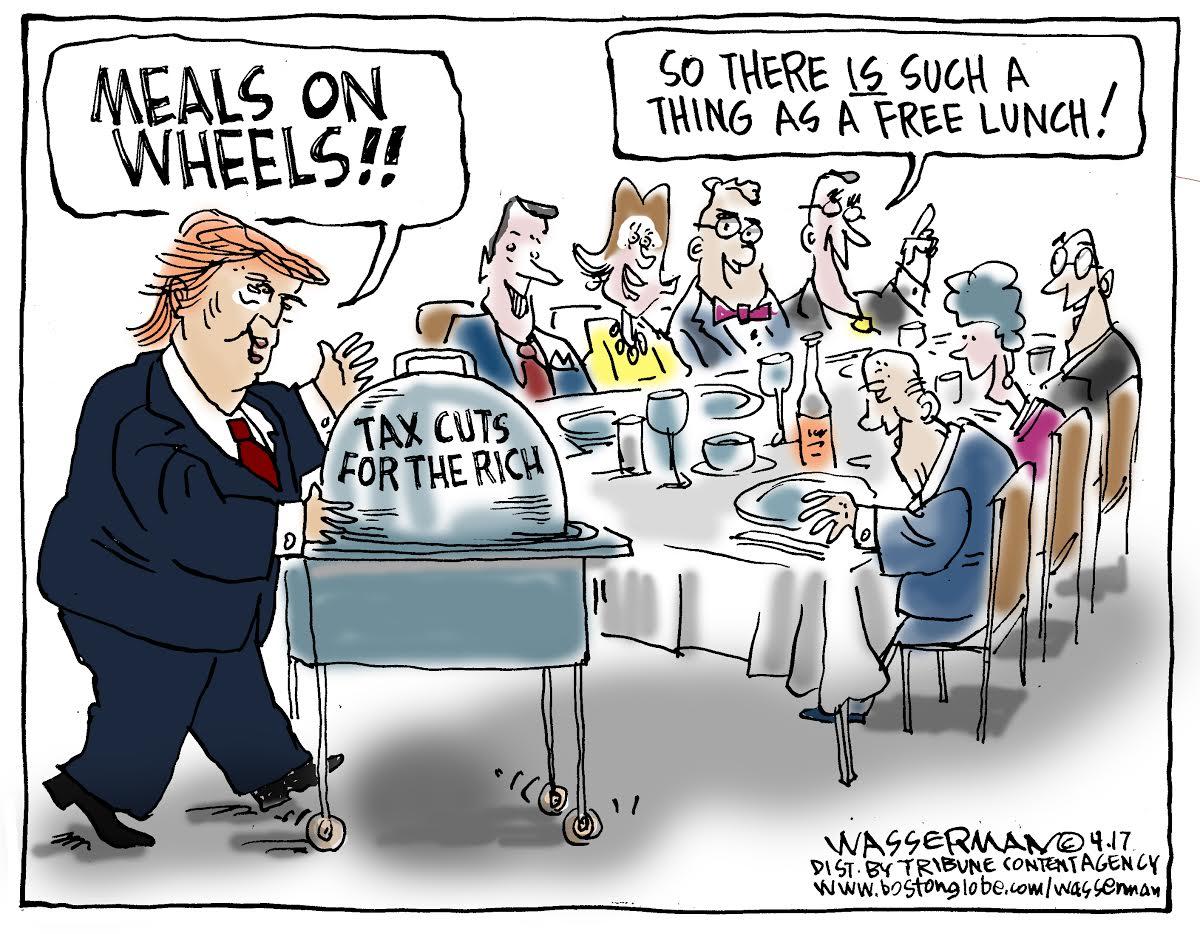 “DEFICITS: The bill’s cost — $1 trillion to $1.5 trillion — makes it more difficult for taxpayers to afford Medicare and Social Security for the baby boom generation, which is now hitting retirement. Republicans didn’t grapple with those costs. Instead, they kicked the can down the road. Ignoring the bill’s price tag, or pretending we needn’t worry about deficits, is like ignoring climate change or pretending we needn’t worry about its effects. I’ll say one thing for Republicans in Congress: They’re consistent.”

“To what end? To hand corporations big tax cuts they don’t need, while lowering the tax rate paid by those of us in the top bracket, and allowing the wealthy to shelter more of their estates.”

“To be clear: I’m in favor of reducing the 35 percent corporate tax rate as part of a revenue-neutral tax reform effort. Right now, the corporate code is so convoluted, and rates so high relative to other nations (thereby creating an incentive to keep profits offshore), that the real rates companies pay can be wildly divergent. This is neither fair nor efficient. Eliminating loopholes and reining in the offshoring of profits can and should be done in a revenue-neutral overhaul of the tax code.”

“Republicans in Congress will have to take responsibility for the bill’s harmful effects, but blame also falls on its cheerleader-in-chief, President Trump. A president’s job is to get the two parties in Congress to work together. Yet Trump is making the same mistake that Barack Obama made in his first two years in office — believing that his party’s congressional majority gives him license to govern without the other side.

The tax bill is an economically indefensible blunder that will harm our future. The Republicans who must surely know it — and who have bucked party leaders before — should vote no.