As of yesterday (12/19/17), it looked like Democrat Shelly Simonds emerged from a recount as the apparent winner in the 94th District of the House of Delegates by one vote, seizing the seat from Republican incumbent David Yancey. The final tally: 11,608 for Simonds to 11,607 for Yancey. It was expected that a 3 judge panel to certify the results. This flip of a republican seat by one vote created a rare  50-50 tie between the parties in the House of Delegates.

A Democratic wave in November 2017 flipped more than about dozen seats blue and severely eroded the power of Republicans, who have dominated the House since 1997. A 50-50 tie in the House would force both parties to broker a power-sharing deal. Two more votes are being contested in Virginia.

But that was yesterday’s news. Here is the rest of the story….

On December 20, 2017, Jennie Jarvie of the LA Times penned the following report, “Virginia election now tied after GOP challenge. Winner to be decided by drawing lots.”

The nail-biting race for control of Virginia’s state House continued Wednesday as a panel of election judges declared that a razor-thin ballot recount that Democrats had celebrated as a win was, in fact, a tie.

Now it appears the winner will be decided by lot.

On Tuesday, it had appeared that Shelly Simonds, a Democratic challenger, had defeated Republican incumbent David Yancey by a single vote.

A victory for Simonds in the 94th District would have upset Republicans’ long-held majority and left the House evenly split between the two parties.”

(A reporter from the Virginian-Pilot tweeted a photo of the ballot:) 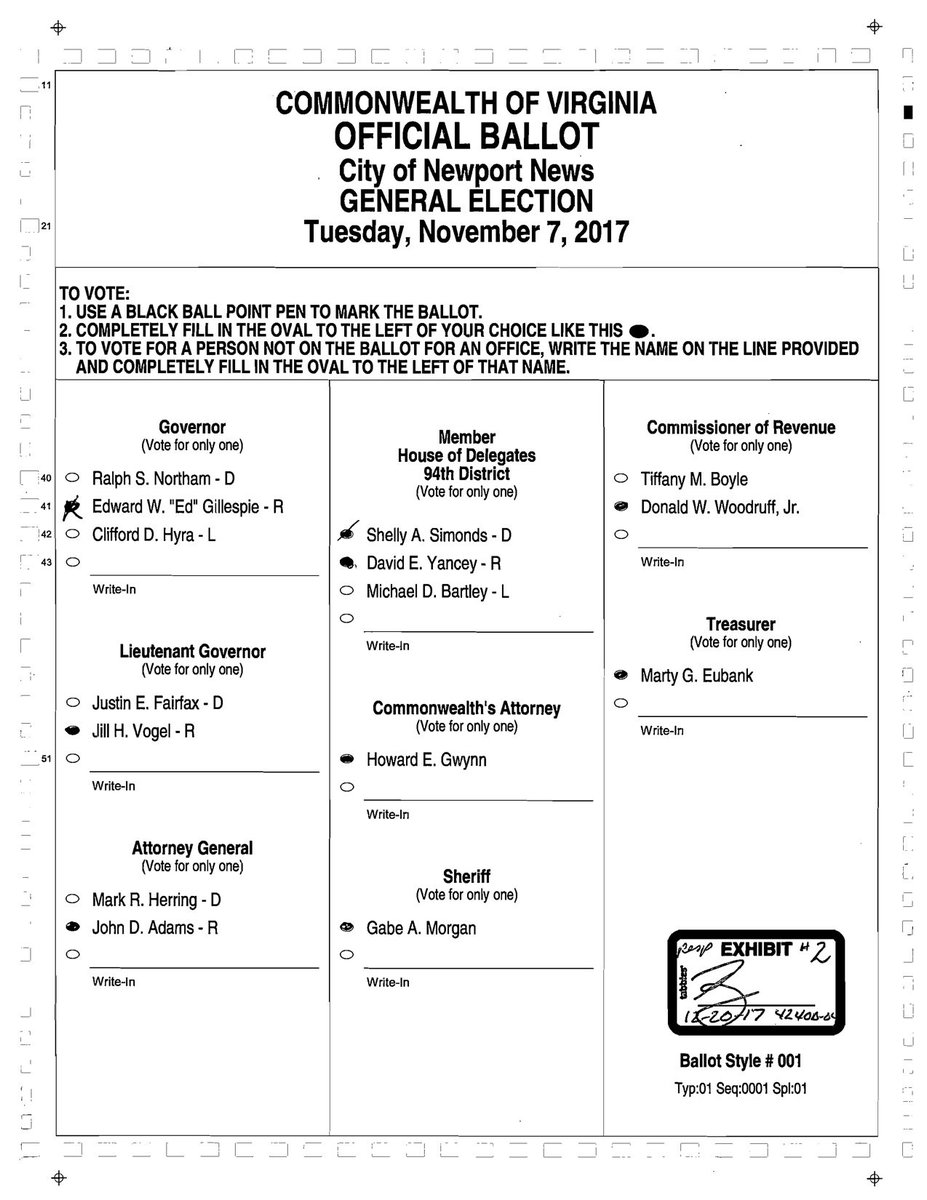 BREAKING: We obtained the actual ballot submitted to the court.
Dissect away.https://pilotonline.com/news/government/politics/virginia/republican-awarded-more-vote-causing-a-tie-in-house-race/article_ecdf9e8a-1f10-5dc7-a955-9873e3f60ebe.html …

“Yet the drama continued Wednesday as Yancey’s campaign contested Simonds’ lead of 11,608 to 11,607, arguing that one ballot was improperly counted: it contained a mark for Simonds as well as a mark for Yancey, but the mark for Simonds had also been struck out.”

“After deliberating for a few hours, the three-judge panel ruled that the questionable ballot should be counted in favor of Yancey, leaving both Simonds and Yancey with 11,608 votes.”

“I appreciate that every vote was reviewed and counted and that the judges took an adequate amount of time to deliberate before making a decision,” Yancey said in a statement Wednesday.”

“We continue to be supportive of an open and lawful election process that is fair to all voters.”

In a tie, Virginia law requires the state Board of Elections to draw the winner by lot.

“Basically, both names get put into a jar and one gets pulled out, and that’s who wins the election,” said Quentin Kidd, director of the Judy Ford Wason Center for Public Policy at Christopher Newport University.” “A date for the drawing has not been set.”

The drawing, however, is not necessarily the end of the race: If the loser is unhappy with the result, he or she can request another recount.

A win for Simonds would constitute a major blow for Republicans and challenge the balance of power in Richmond, where the GOP has controlled the House of Delegates for 17 years.

Though Republicans still control the state Senate, Democrats last month flipped a string of Republican-controlled House seats throughout the state, slashing the GOP’s 66-34 majority in the House to 51-49.

“I promise you there are hundreds of voters in the 94th District right now who didn’t vote and are kicking themselves now because their vote would have made the difference,” Kidd said. “We tell our students all the time that every vote counts and your role in a democracy is important. Very rarely do we have a case study like this that demonstrates so profoundly how powerful an individual vote can actually be.”

“Simonds, a school board member who campaigned in the blue-collar district in eastern Virginia on issues of more accessible healthcare and strong public schools, had initially appeared to lose November’s election by 10 votes.”

“We win,” Yancey posted on Twitter on Nov. 8, “and I’m grateful for everyone’s support!”

“But during a long recount Tuesday, Yancey’s lead narrowed and Simonds pulled ahead.

“The power of every vote has never been clearer,” Tom Perez, chairman of the Democratic National Committee, said in a statement after the recount.”

“The Newport News district is not the only House election in limbo. The prospect of a compromise or power-sharing agreement between Democrats and Republicans in the House is still possible as two more recounts are scheduled this week — one in which a Democratic challenger leads by 336 votes in Richmond’s 68th House District and another in which the Republican candidate leads by 82 votes in the Fredericksburg area’s 28th District.”

The last time House delegates had to share power was in 1997, but then it was not a straight 50-50 split along party lines because an independent caucused with Republicans.

“I cannot find another time in Virginia’s history since the Civil War where House delegates divided 50 by 50 on party lines,” Kidd said. “What magnifies the drama here is that it could be a 50-50 split for the first time in history.”

“On Wednesday (12/20/17), Republican leaders in Virginia’s House said they only become aware of the suspect ballot after the recount had been completed and they had congratulated Simonds on her win.”

“While it appeared yesterday that Shelly Simonds was elected, it’s obvious now that the result will remain unclear for a while longer,” House GOP leaders Kirk Cox, Tim Hugo and Nick Rush said in a statement.”

“The day before, the House Republican leaders had expressed a willingness to cooperate with Democrats.”

“Meanwhile, Democrat Ralph Northam is set to take on the role of Virginia’s governor, while Republicans still have a 21-19 majority in Virginia’s Senate.”

“Whatever the ultimate outcome in the House, Kidd said he expected minimal partisan rancor. Northam had already set the tone, he said, by expressing interest in pursuing a bipartisan agenda.”