As far as I can determine, it looks like all the hullabaloo that the republican President Donald Trump and his sycophants operating in the White House, the US Congress and right wing media outlets, is about some questionable text messages that they have uncovered and whipped up into a conspiracy theory about how the deep state within the FBI have been out to get the president at all costs.

It seems that on the day after President Trump was elected, there was a single text sent by a senior FBI lawyer Lisa Page to Peter Strzok (both were involved in an extra-martital affair), the top counterintelligence officer at the FBI and a key figure in the bureau’s past investigations into President Trump and Mrs. Clinton.

The text message is as follows: “Are you even going to give out your calendars?,” Page asks Strzok. “Seems kind of depressing. Maybe it should just be the first meeting of the secret society.”

Based on several news reports, republicans have found other texts in mid December 2017 between these two agents that were disparaging to the president.

The other allegation, which has been widely disseminated, is that the FBI intentionally deleted an unknown number of texts between these two FBI employees. (It looks like it was due to the manufacturer Samsung’s glitch that occurred which agents started using in lieu of their older I-phones.)

The FBI’s  Special counsel Robert Mueller who was appointed last May after President Trump fired FBI Director James Comey, did promptly remove Agent Strzok from his team when he became aware of the texts.

Then there is a memo created by the the republican Chair of the House Intelligence Committee Devlin Nunes of California who had already been proven to be a strong partisan defender of President to where he had to recuse himself temporarily (months) from the Committee’s investigation into the Trump-Russian connections probe. Supposedly the claims contained in the memo are explosive. These claims which are purported to be so egregious have yet to be shared with the FBI or the Department of Justice (DOJ) or the Inspector General or an independent oversight panel. The FBI and the DOJ have asked for access to this memo to review it for any classified data it may contain before it is further disseminated. The republican legislators have declined. There are Russian bots hitting the US blogosphere demanding that the memo be made public.

It is my opinion that the selective compilation of all this data by republican partisans is one more tactic in the overall orchestrated attack designed to discredit the FBI and its work product  pertaining to the Trump-Russian connections Inquiry. This media campaign is working. Polls now show that about 49% of the public have doubts about the FBI’s competence in handling the Trump-Russian probe.

“Conservative Republicans are pushing to release a memo containing classified information about the federal investigation into Russian meddling in the 2016 campaign, sparking new controversy.”

“The contents of the four-page memo, which was written by staff working with Rep. Devin Nunes (R-Tulare), who chairs the House Intelligence Committee, have not been publicly revealed. But President Trump’s allies in Congress say that they are explosive.”

“Democrats on the committee have dismissed the memo as a dishonest attempt to undermine the Russia investigation, and Rep. Jackie Speier (D-Hillsborough) called it a “pack of lies.”

“Freedom Caucus members asked House Speaker Paul Ryan to support releasing the memo during Thursday (1/18/18) night negotiations over the federal budget. Ryan deferred the issue to the House Intelligence Committee, which made it available to every member of Congress this week.” 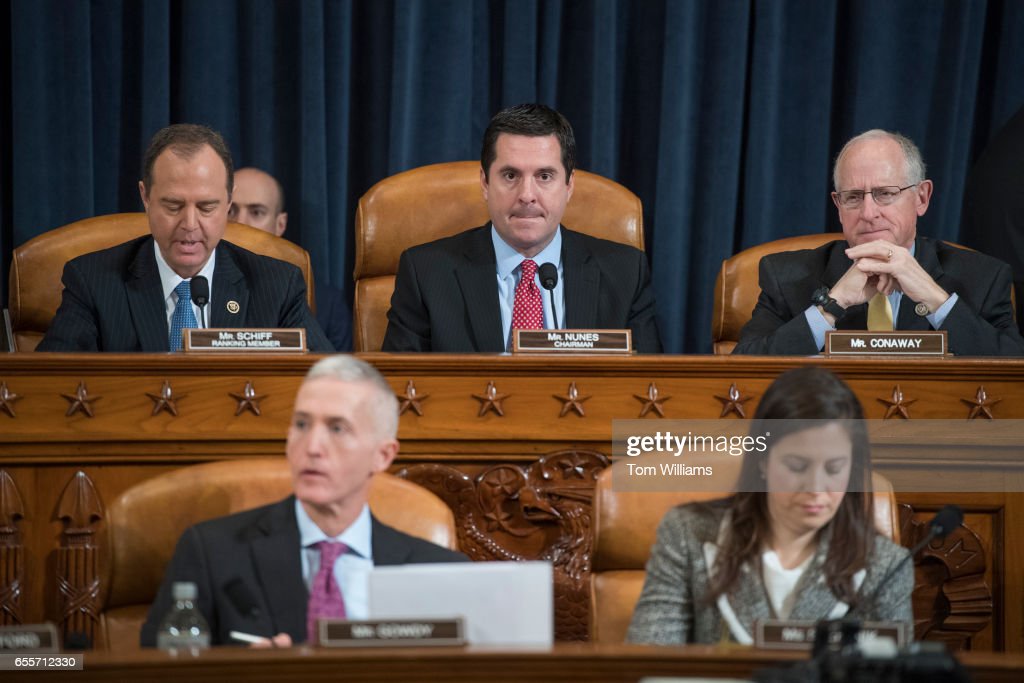 “It was unclear Friday (1/19/18) whether the GOP-led House committee would hold a vote that would lay the groundwork for making the memo public.”

“The document is the result of Nunes probing how the Department of Justice handled the Russia investigation. Nunes has said his work has uncovered serious problems involving the use of secret surveillance powers.”

“The reaction to the memo was sharply split along party lines.”

Rep. Matt Gaetz (R-Florida) said the information was “jaw-dropping.” Rep. Darrell Issa (R-Vista) said Americans would be “outraged” if they read the memo.

“But Rep. Eric Swalwell (D-Dublin), another committee member, said the memo was filled with misinformation and should not be released.”

“It is a perversion of the facts to brainwash our members and protect the president,” he said.”

Republicans are floating the idea that FBI and Department of Justice (DOJ) officials formed a “secret society” that held meetings in which they plotted to undermine President Trump and his administration.

Two FBI agents accused by Republicans of harboring anti-Trump bias exchanged text messages, one of which mentioned a “secret society” — possibly as a private joke.

The message, first described by House Oversight and Government Reform Committee Chairman Trey Gowdy (R-S.C.) and Rep. John Ratcliffe (R-Texas), lacks context and the lawmakers have admitted that they don’t know for sure what it means. 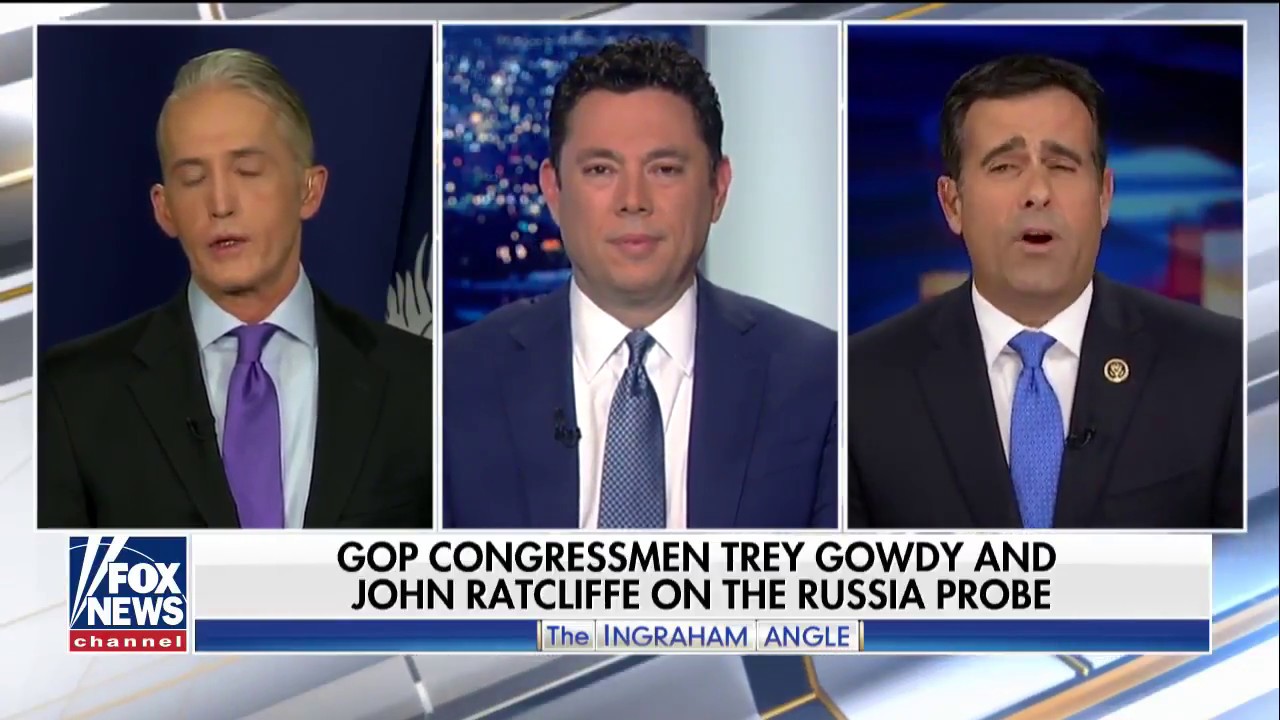 “But the term has caught fire in conservative media and Republicans have promoted the text as a potentially explosive development, implying it confirms suspicions that the FBI gave Hillary Clinton an election-year pass but remain hell-bent on bringing charges against Trump.” (In light of the FBI Director Comey’s October 206 surprise letter which cost her the election, this theory seems implausible.)

“But Democrats say Republicans are selectively leaking the messages in a way that is misleading. They argue that all FBI agents have personal opinions and that it doesn’t preclude them from doing their jobs. Text messages between two agents does not implicate an entire agency, which relies on the work of scores of career prosecutors and agents acting independently to push investigations forward, the bureau’s defenders say.” 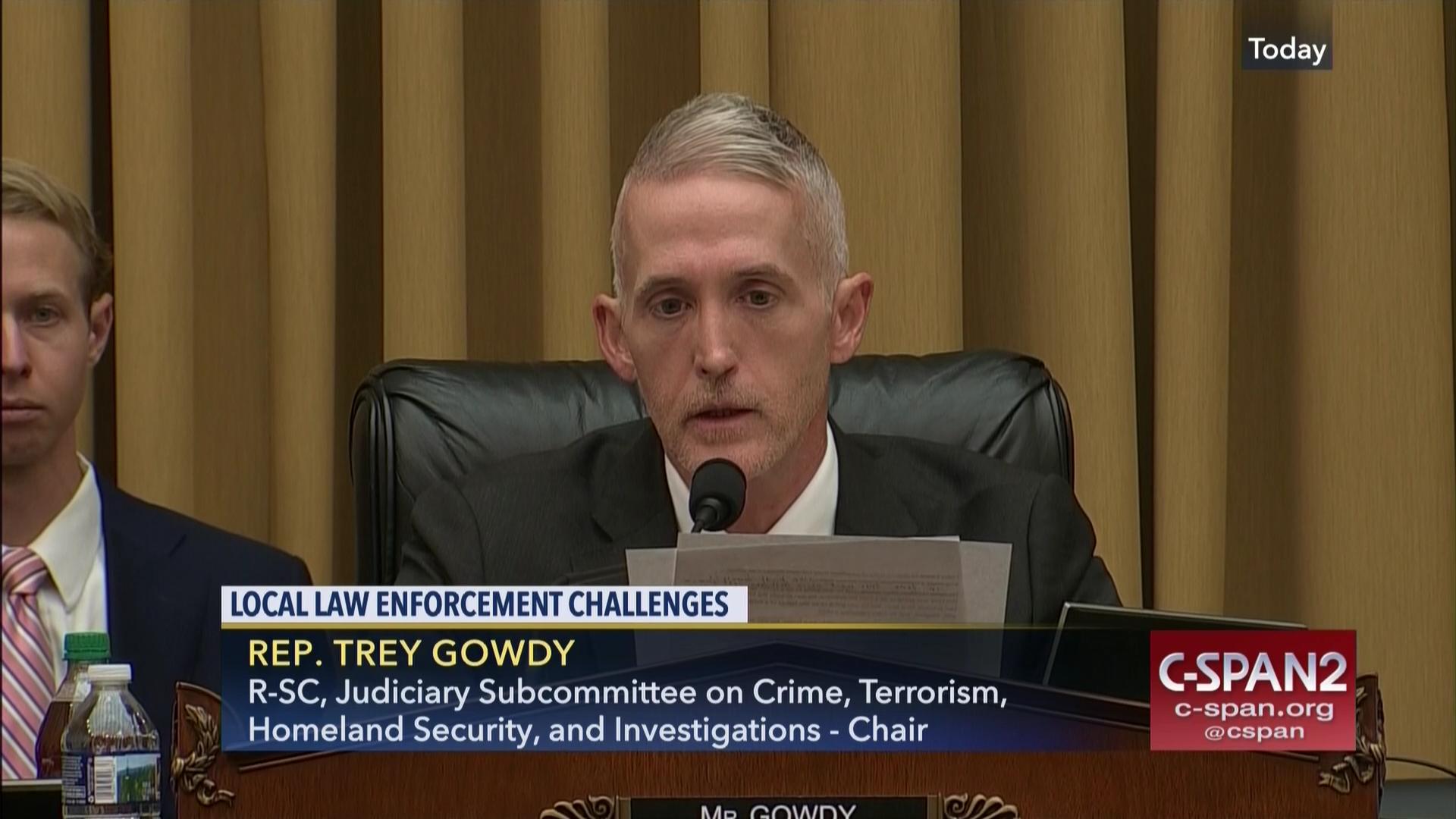 “Furthermore, Democrats note that Mueller acted appropriately by removing Strzok and Page from his team (summer 2017). There is nothing in the text messages that taints Mueller’s independent investigation, Democrats say.”

“Republicans say the text messages suggest a deep political bias at the FBI that might explain the decision not to charge Clinton for carelessly handling classified material.”

“GOP lawmakers also say the text messages are evidence that the investigation into allegations that Trump campaign officials had improper contacts with Moscow was politically motivated from the start.”

“This text that Johnny Radcliffe found last night about this secret society — now, I have no clue what that means because it was not the phraseology I used, but it’s the day after the election,” Gowdy said on Fox News. “It’s the same two people that were discussing a little bit later in the text the damage they had done with the Clinton investigation and how they could, quote, ‘fix it and make it right.’ That is a level of bias that is stunning among law enforcement officers.” 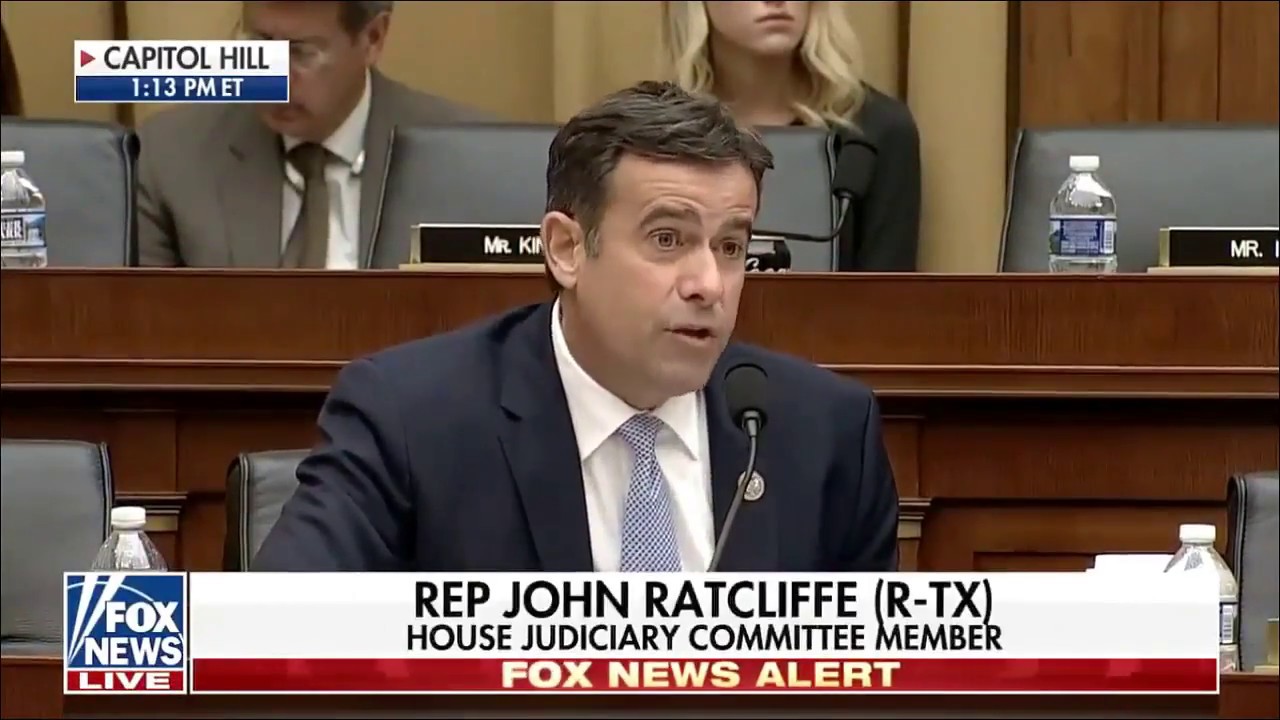 “I’m not saying that [secret society meetings] actually happened, but when folks speak in those terms, they need to come forward to explain the context,” said Ratcliffe, a former prosecutor who has emerged as a prominent new voice in the GOP’s law enforcement investigations.

Sen. Ron Johnson (R-Wis.) added a new layer of intrigue when he claimed on Fox News on Tuesday night to be working with a whistleblower with knowledge of “off-site” meetings between FBI and DOJ officials.

Johnson told CNN on Wednesday that he has not been able to confirm what was said in those meetings but that Republicans would continue to investigate.

Yet even some voices on the right are skeptical about the texts.

Jonah Goldberg, writing in The National Review, said he was taking a “wait-and-see approach to all of this Strzok-Page-secret-society stuff” because “there’s just too much theatrics and chest thumping involved.”

“By all means, let’s have the appropriate investigations. Let’s have some hearings,” he wrote, given some “legitimately disturbing facts” about the FBI. At the same time, he also said there’s been an “astonishing amount of manufactured outrage, absurd dot-connecting, and near-hysteria.”

“Conservative writer Erick Erickson tweeted on Wednesday that Johnson’s comments to CNN made the “whole thing sound like a clown show.”

“Republicans have gained some traction in recent days by releasing small tranches of text messages between Strzok and Page, which some Democrats and former FBI officials acknowledge reveal personal bias.”

“In one text, Page calls Trump an “idiot.” In others, Strzok and Page express astonishment that Trump would win the GOP nomination and say it gives added “pressure” to wrap up the Clinton investigation.”

“Lawmakers also say they will call Comey back to Capitol Hill to clarify his claim, made under oath, that he didn’t decide not to charge Clinton until after he interviewed her. Republicans say one of Page’s texts appears to contradict that claim.”

This week, Republicans were newly infuriated by the revelation that the FBI “failed to preserve” texts between Strzok and Page that were sent between December Dec. 14, 2016, to May 17, 2017 — the day Mueller was tapped to lead the special counsel investigation into Russia’s election meddling. (There are claims by republicans that the texts were deliberately deleted.)

The FBI insists that there was nothing nefarious about the lost messages — that the data was not retained because of “misconfiguration issues” related to software upgrades on the bureau’s phone devices. Reports emerged Wednesday that a large number of FBI employees lost messages around the same time due to a glitch.

The DOJ has opened an investigation into the lost messages but Trump’s GOP allies — many of whom lack confidence in Attorney General Jeff Sessions to aggressively pursue investigations into alleged FBI or DOJ abuses — are calling for a second special counsel.

That will have to wait for the DOJ’s inspector general Matthew Horowitz, who has a strong reputation as an independent investigator, to finish his investigation.

Meanwhile, new battle lines are being drawn over a controversial four-page memo authored by House Intelligence Committee Chairman Devin Nunes (R-Calif.) that is said to be based on thousands of pages of intelligence stemming from a yearlong GOP investigation into the FBI.

NUNES”It is believed to have new information about the FBI’s use of an anti-Trump dossier to obtain a Foreign Intelligence Surveillance Act warrant targeting the Trump campaign.”

“The House Intelligence Committee is expected to vote next week on making the classified document public.”

“The FBI asked to see the document, but House Republicans have denied the request.”

“The famous House memo is just the latest and most dangerous installment of trying to save this president’s bacon by damaging and throwing mud on a storied institution, the FBI and the Department of Justice,” Rep. Jim Himes (D-Conn.) said on CNN.”