This past week we have seen the firing by tweet the US Secretary of State Rex Tillerson by the republican President Donald Trump to be replaced by a presidential lackey, the former CIA Director and former US Congressman Mike Pompeo. This was in the midst of other publicized departures of White Staffers like Rob Porter, Hope Hicks and Gary Cohn and now, there are the rumors of the departures of  more of “All the President’s men.

The Wall Street Journal and the Washington Post have already reported that the president’s National Security Adviser General H.R. McMaster will be leaving by the end of March 2018. His replacement has yet to be appointed.

According to various news reports, the president felt uncomfortable in the presence of the Secretary of State Rex Tillerson and his National Security Adviser H.R. McMaster because they appeared to treat him in a condescending way. Of course, they were experts with exceptional backgrounds.

We are still waiting for the the cliff hanger of the week, the possible firing of the FBI’s Acting Director, a 21 year hero-veteran of FBI who has a retirement date on the 18th of March 2018. If he is fired before this date, he loses his pension. The president’s spokesperson Sarah Huckabee Sanders said there is a report indicating that his was a bad actor and the decision of the firing is in the hands of the US Attorney General Jeff Sessions, another man who has been the recipient of the president’s ire for months. (See: FBI’s Andrew McCabe asks Justice Department not … – Washington Post)

According to the March 16. 2018 Wall Street Journal by Michael C. Bender, “President Donald Trump and White House chief of staff John Kelly have settled on a truce, at least temporarily, as the latest round of staff tumult continues to ripple through the West Wing, according to people familiar with the discussions.”

This White House is being directed like the president’s former reality show, the Apprentice. Mr. Tillerson’s  replacement, Mr. Pompeo is well known in the Washington DC area as the Koch brothers’ guy. As a West Point man who was #1 in his class and a Harvard Law School grad where he was its Law Review editor, he is a smart fellow. Afterwards, he served as a cavalry officer in the Army, reaching the rank of captain. Later, he ran to be the republican US congress representative for the State of Kansas from 2010 until he was tapped to be CIA director in 2017.

When he served in the US Congress, he ended up being a member of the House select committee on intelligence, where he was an aggressive critic of US foreign policy under President Barack Obama’s administration, particularly regarding the US-Iran nuclear deal. He led the congressional opposition to the enactment of this deal.

As per the 3/13/18 Guardian report by Lauren Gambino, “He has defended waterboarding as a interrogation tactic, arguing that it is not torture and is therefore legal. In a statement criticizing a 2014 report released by the Senate select committee on intelligence that disclosed for the first time torture practices used by the CIA, Pompeo said: “These men and women are not torturers, they are patriots. The programs being used were within the law, within the constitution.”

As a Tea Party gung-ho ideologue, he will be a willing point man for the president, catering to his every whim. As the CIA director, he has been courting the president’s favor as he was the one who delivered daily to the president, the intelligence material that was part of daily briefing book.

We already know that he is for sale. As per a 3/13/18 Think Progress Report by Joe Romm, “Before Pompeo became CIA Director in 2017, he had for six years been a GOP House member from Kansas — and “the #1 all time recipient of #KOCH Industries $$$,” as the nonprofit research group OpenSecrets.org tweeted at the time:

“That’s over $900,000 to buy one Congressman. No surprise, then, that Pompeo, who was a Tea Party member, is also a major denier of climate science. Pompeo described President Obama’s effort to cut carbon pollution at home (through the Clean Power Plan) and abroad (through the Paris climate deal) as a “perverse fixation on achieving his economically harmful environmental agenda” and as “worshiping a radical environmental agenda.” 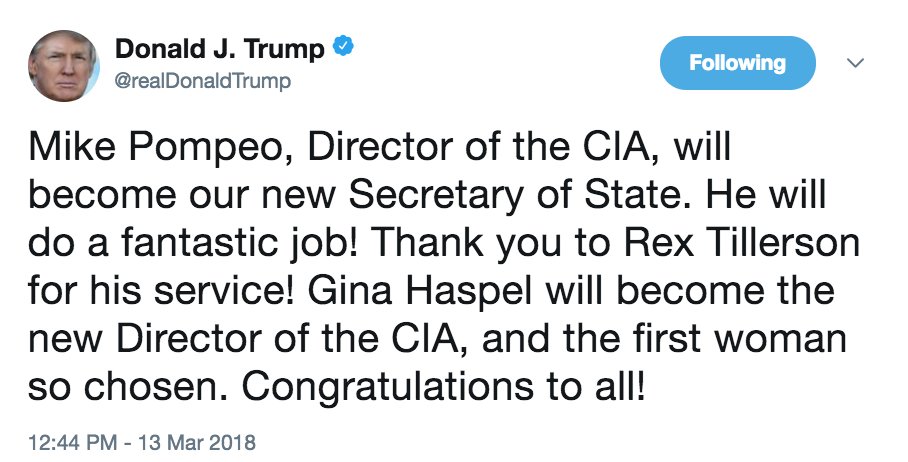 “He called the Paris Climate Accord a “costly burden” in 2015, adding that “Congress must also do all in our power to fight against this damaging climate change proposal and pursue policies that support American energy, create new jobs, and power our economy.”

So what the American peoples have now is a US Secretary of State who is the favored Koch brothers’ man who has been a promoter for the use of torture, climate change science being a hoax and for ending the 2015 US Iran nuclear agreement.

Why am I worried sick?