aside After FBI McCabe’s Firing, It’s Time For Action To Save DOJ’s Rosenstein And FBI’s Mueller’s Jobs

Even if there is any validity to the report by the Justice Department that the Acting Director Andrew McCabe did act improperly during the 2016 FBI  Hillary Clinton investigation, I’m convinced that the unprecedented  way and speed by which this 21 year civil servant was fired, spells just one thing, this was a politically motivated firing.

This action was wrong on so many levels. The president has been hounding this very same FBI dedicated servant for months before he was fired literally hours before he was due to resign when he could have received the pension that was due him.

On the 17th of March, this is how the US president responded by tweet to the news of Mr. McCabe being fired,  “Andrew McCabe FIRED, a great day for the hard working men and women of the FBI — A great day for Democracy.” This presidential act tells me all I need to know.

The good news is that Mr. McCabe did keep memos of all his interactions with the president which he has delivered to the FBI’s Special Counsel Robert Mueller III, who is leading the Trump-Russia probe. And he has lawyer-ed up. According to news sources, Michael Bromwich of the Bromwich Group has confirmed that he is representing  Mr. McCabe for the purposes of the matter that led to his firing.

And there may be a way to salvage his pension. As per a 3/17/18 Washington Post report by Amber Phillips, ” At least one Democratic congressman has offered McCabe a temporary job so he can get full retirement benefits — and McCabe appears to be considering.”

“Rep. Mark Pocan (D-Wis.) announced Saturday afternoon that he has offered McCabe a job to work on election security in his office, “so that he can reach the needed length of service” to retire.” “A spokeswoman for McCabe, Melissa Schwartz, didn’t immediately rule out a job with one of the most liberal members of Congress, which might only need to last for a day or so for him to get his full retirement benefits: “We are considering all options.”

“It’s not immediately clear if getting fired from the FBI on a Friday and going to work on Capitol Hill on a Monday would solve McCabe’s problems for certain, though at least one former federal official with knowledge of retirement rules says it probably would.” (See: Andrew McCabe was just offered a job by a congressman )

One suggestion from a McCabe supporter: if a friendly member of Congress hired him for a week he could possibly qualify for pension benefits by extending his service the extra days

Would be happy to consider this. The Sixth District of MA would benefit from the wisdom and talent of such an experienced public servant. https://twitter.com/mitchellreports/status/974831223817342977 …

So now the president has gotten rid of two of his nemesis, FBI Director James Comey and the FBI Acting Deputy Director Andrew McCabe. But now, it is my contention that he will next be targeting DOJ ‘s Deputy Attorney General Rod Rosenstein and the FBI’s Special Counsel Robert Mueller III.

“I pray that Acting Attorney General Rosenstein will follow the brilliant and courageous example of the FBI Office of Professional Responsibility and Attorney General Jeff Sessions and bring an end to alleged Russia Collusion investigation manufactured by McCabe’s boss James Comey based upon a fraudulent and corrupt Dossier,” said John Dowd, as first reported by the Daily Beast.” 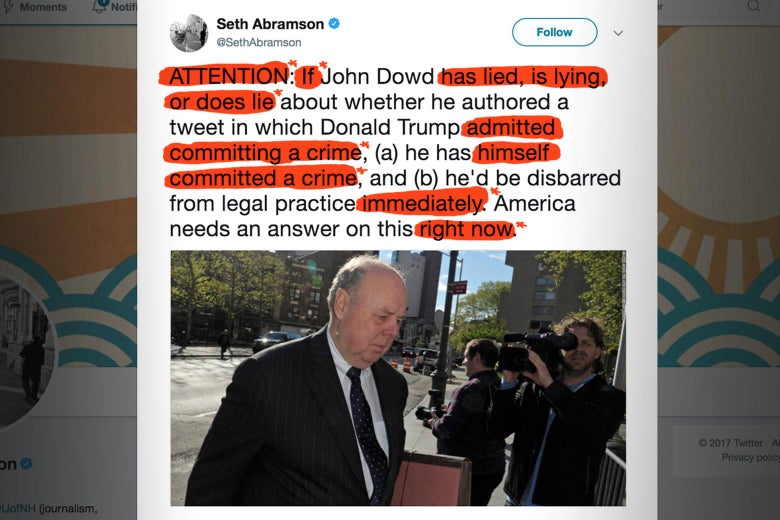 “He initially told the news outlet that he was speaking in his official capacity as Trump’s lawyer. But he later retracted that statement, telling POLITICO he was commenting in his personal capacity.”

As per a 3/16/18 Hill report by Jacqueline Thomsen, “A retired four-star Army Gen. Barry McCaffrey said that he believes that President Trump is a “serious threat to US national security.”

“(He) tweeted Friday that he reached the conclusion about Trump because the president “is refusing to protect vital US interests from active Russian attacks.”

“It is apparent that he is for some unknown reason under the sway of Mr. Putin,” he added. 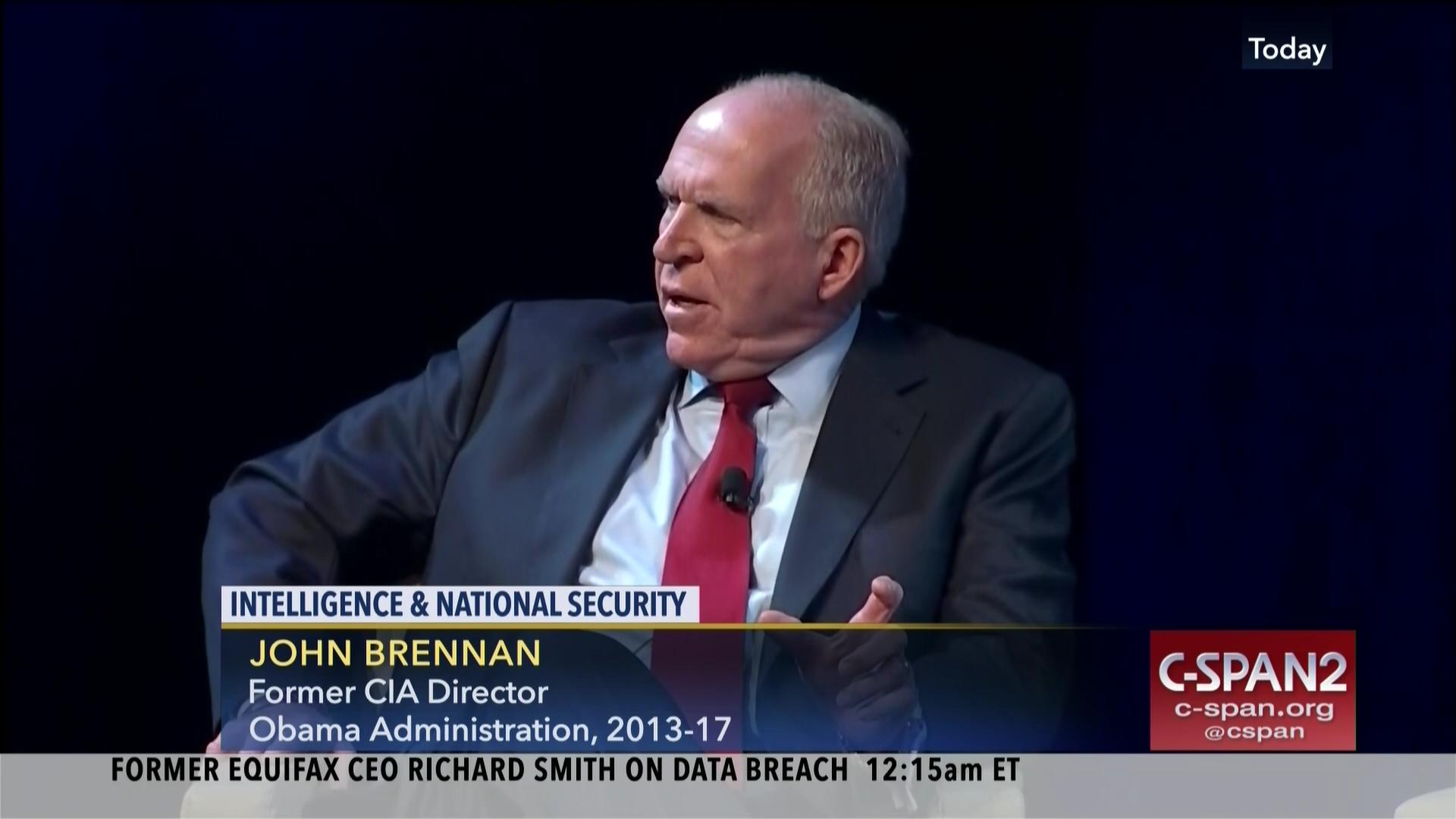 As per another 3/17/18 Hill report by Jaqueline Thomsen, John Brennan, who led the CIA from 2013 to 2017, fired back at Trump saying he would go down in history as a “disgraced demagogue.”

When the full extent of your venality, moral turpitude, and political corruption becomes known, you will take your rightful place as a disgraced demagogue in the dustbin of history. You may scapegoat Andy McCabe, but you will not destroy America…America will triumph over you. https://twitter.com/realdonaldtrump/status/974859881827258369 … It is rich for the US Attorney General Jeff Sessions as head of the US Department of Justice to have fired the 21 year+ civil servant and the FBI’s Acting Deputy Director Andrew McCabe’s for his supposed lack of candor when Mr. Sessions is guilty of a worse offense.

“Some might contend that Sessions’ recusal covered only the Clinton and Trump campaigns, and that McCabe’s firing involved the Clinton Foundation investigation as a separate matter. But Sessions unequivocally assured senators of his intentions during his confirmation hearings in response to a clear and specific question from the Chair of the Senate Judiciary Committee, Sen. Chuck Grassley (R-IA). Sen. Grassley asked a follow-up question that went right to the point. In response, Sessions very clearly said his recusal would cover any matters involving the Clinton Foundation.”

Here is the full exchange:

GRASSLEY: During the course of the presidential campaign, you made a number of statements about the investigation of former Secretary of State Hillary Clinton, relating to her handling of sensitive emails andregarding certain actions of the Clinton Foundation. You weren’t alone in that criticism. I was certainly critical in the same way as were millions of Americans on those matters, but now, you’ve been nominated to serve as attorney general. In light of those comments that you made, some have expressed concerns about whether you can approach the Clinton matter impartially in both fact and appearance. How do you plan to address those concerns?

SESSIONS: Mr. Chairman, it was a highly contentious campaign. I, like a lot of people, made comments about the issues in that campaign. With regard to Secretary Clinton and some of the comments I made, I do believe that that could place me objectivity in question. I’ve given that thought.

I believe the proper thing for me to do, would be to recuse myself from any questions involving those kind of investigations that involve Secretary Clinton and that were raised during the campaign or to be otherwise connected to it.

GRASSLEY: OK. I think, that’s — let me emphasize then with a follow up question. To be very clear, you intend to recuse yourself from both the Clinton e-mail investigation and any matters involving the Clinton Foundation, if there are any?

It is time for us who are part of the resistance, to contact our US Congress representatives to insist that they work to pass a bill to protect the jobs of the DOJ Deputy Attorney General Rod Rosenstein and the FBI’s Special Counsel Robert Mueller III from the whims of the US president.